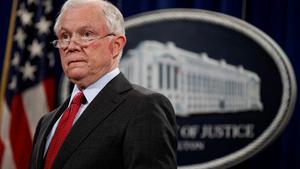 The New York Times reported Thursday that President Donald Trump had his White House counsel try to convince Attorney General Jeff Sessions not to recuse himself from the Russia investigation. Julie Hirschfeld Davis of the Times and Jack Goldsmith, a Harvard law professor, tell William Brangham what the revelations mean for the president and whether they amount to obstruction of justice.

As the investigation into ties between the Trump organization and Russian officials by special counsel Robert Mueller continues, The New York Times is reporting on the frenzied days around Attorney General Jeff Sessions’ decision to remove himself from overseeing the inquiry, and of President Trump’s firing of then FBI Director James Comey.

Our correspondent William Brangham has more.

The New York Times report paints a revealing picture of Mr. Trump and his inner circle in those crucial early days of the Russia investigation.

To break down the revelations and what they mean for the president and the man who is now investigating him, I’m joined by Julie Hirschfeld Davis, White House reporter for The New York Times who worked on this story, and Jack Goldsmith, professor of Harvard Law School and co-founder of the Lawfareblog.com. He also served as assistant attorney general for the Justice Department’s Office of Legal Counsel during the George W. Bush administration.

So, Julie, I wonder if you could just start off. This story had so many interesting details to it and helped tell us a little bit more about what may be an obstruction of justice case. Can you just tell us — give us some of the details that you guys reported.

Well, what we’re learning is more about what the special prosecutor, Robert Mueller, is looking at as he tries to figure out whether there is a case for obstruction of justice.

And one of the key things that my colleague Mike Schmidt and the rest of us learned in the course of reporting the story was that the president — we had known before that the president was very upset that the attorney general, Jeff Sessions, recused himself from the Russia investigation.

What we have found out now is he actually dispatched the White House counsel, Don McGahn, who is the top lawyer at the White House, to essentially lobby Jeff Sessions not to do that. He had been considering it. He sent McGahn to try to talk him out of it. And when that failed, Trump really erupted in rage and said he wanted a protector just like previous presidents.

He felt that he wasn’t being personally protected in the way that he wanted to be. And he said, “Where is my Roy Cohn?” of course referring to his former personal lawyer, who was also the top aide many decades ago to Senator Joe McCarthy when he was doing the anti-communism hearings.

One of the lawyers in the White House Counsel’s Office knew that he wanted to do this, that he was considering it, and had told the president that he needed a reason if he wanted to fire the FBI director. He subsequently researched that and found out it wasn’t in fact the case, but he deliberately kept that information from President Trump because he was afraid that he would act on it and go ahead and fire Jim Comey, which, of course, he did.

We’re also learning more about the justification that the president sort of and his top aides were trying to put in place for getting rid of Comey. We know that Jeff Sessions apparently dispatched an aide to go to Capitol Hill and see if there was any dirt they could dig up on Comey, ostensibly, I would assume, in an effort to discredit him before letting him go.

Jack Goldsmith, what of these elements stand out to you, and why?

Well, they are all three interesting tidbits, but I’m not sure how much they add to what the president himself has already admitted to in his tweets and discussions about a possible obstruction of justice charge.

There is a lot of interesting details in the story that gives a lot of richness to what we already know, but I’m not sure it advances our understanding of a possible obstruction of justice charge.

And, again, we should say we really don’t know if Mueller is pursuing obstruction of justice.

But you are a lawyer, served in the Pentagon and the DOJ. Is your sense that these elements start to add up to what feels like an obstruction of justice case to you?

It’s a very tricky and difficult legal problem to know what that means when it’s the president basically trying to influence an investigation, even of himself, because the president’s at the top of the executive branch. He has authority to fire people. He has in some sense the authority to direct investigations.

So he has a lot of constitutional authority to control the executive branch. On the other hand, there are certainly some things the president could do that would probably constitute obstruction of justice. The problem is knowing whether Mueller, who has — excuse me — Trump, who has been so overt in admitting his reasons for doing this, because he thinks that the whole investigation is a sham and the like, whether that amounts to obstruction of justice.

And, moreover, even if it does, and we don’t know what Mueller knows, there is — the Department of Justice’s position is that a sitting president can’t be prosecuted. I believe Mueller would probably abide by that. So I think all of this investigation that’s looking at obstruction of justice or possibly obstruction of justice is more for a report that would be sent to Congress and for public consumption and congressional consumption for a possible impeachment proceeding.

I don’t think Mueller is going to indict the president.

Julie, there was another piece of information in this report and in prior New York Times reports. And that’s pertaining to the letter that President Trump apparently drafted when he was putting out his rationale.

This was the letter that was going to be sent to Jim Comey saying, here’s why I’m firing you.

We know that the actual letter that was sent to Comey was all about Hillary Clinton and the investigation and how Comey handled that.

Can you tell us what your reporting showed about what the first letter actually contained?

So, we reported the existence of this letter some months ago. And it basically was a letter that the president put together with Steve Miller, his senior policy adviser, in consultation with his son-in-law, Jared Kushner, but basically laying out the reasons for firing Comey.

This may have been in that period of time under which — in which he was under the impression that he needed a reason, beyond just I don’t want him there and I’m firing him.

And it talks about the investigation being a complete fabrication. And it makes it very clear what, as Jack said earlier, the president has actually said publicly, which is that the reason he was firing Comey, or at least one big reason, was that he didn’t like the Russia investigation, he didn’t think it was — he thought it was baseless, and that that was really what was largely behind his decision to try to get rid of him.

Jack Goldsmith, I know that your — you believe that the details of this letter and the involvement of Deputy Attorney General Rod Rosenstein, that’s much more interesting to you, what the deputy attorney general’s role in this justifying how Comey got sacked is all about.

I actually think this is the most interesting revelation in the story. So, the deputy attorney general, Rod Rosenstein, is acting as attorney general for purposes of supervising Mueller. He was the one who appointed Mueller. And that was because his boss, Sessions, recused himself.

So Rosenstein is actually supervising Mueller in his investigation. And Mueller is ostensibly investigating whether or not, at least according to reports, whether or not Trump’s firing of Comey was an attempted obstruction of justice.

So what makes that problematic is that Rosenstein was also involved in the firing of Comey. He wrote a memorandum to the president that the president, in his firing letter, relied on, said it was the reason he fired Comey.

And then it turned out soon thereafter that it really wasn’t the reason he fired Comey, that the memorandum was pretextual, at least for the president. And what this — what the New York Times reporting last night shows is that Rosenstein himself, before he wrote his memorandum to the president to justify firing Comey, knew the president was motivated to fire Comey because of the Russia investigation.

So, that puts — seems to put Rosenstein, who is supervising Mueller, right in the middle of what Mueller is investigating. And that seems to be a conflict of interests.

So, it’s a puzzle to me. But Rosenstein has said he doesn’t believe he has a conflict of interests. He’s testified about that. He says, if he has one, that he will recuse himself.

So it’s a puzzle how he can supervise an investigation that seems to be investigating something he was involved in.

All right, Jack Goldsmith, Julie Hirschfeld Davis, thank you both very much. 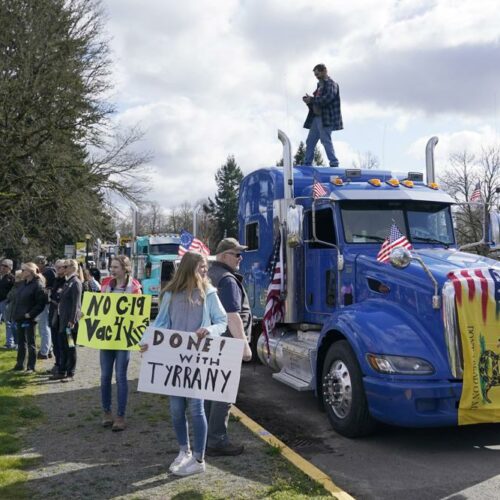 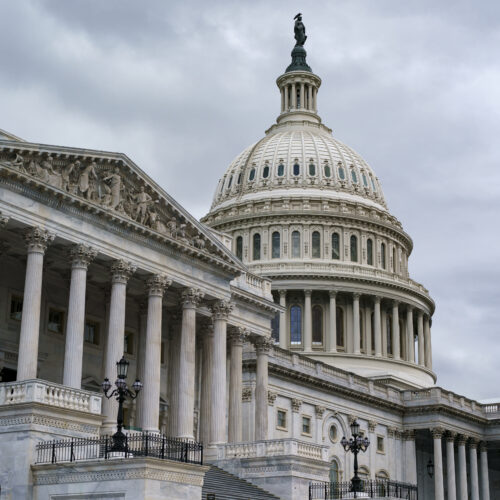 By Julie Appleby Patients are months away from not having to worry about most surprise medical bills — those extra costs that can amount to hundreds or thousands of dollars… Continue Reading Coming Soon, A Surprise Billing Law May Have Unintended Effects On Health Care 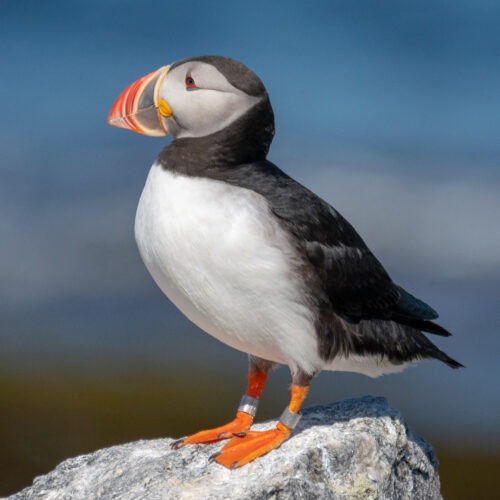 Maine’s population of rare Atlantic puffins took a hit this year, as the number of chicks to survive a tough summer plummeted. The state’s coastal bays and the Gulf of Maine is among the fastest-warming large water bodies on the planet, making the puffins’ fate a test-case for how climate change could disrupt marine ecosystems worldwide. Continue Reading Climate Change Is Causing Problems For Puffins