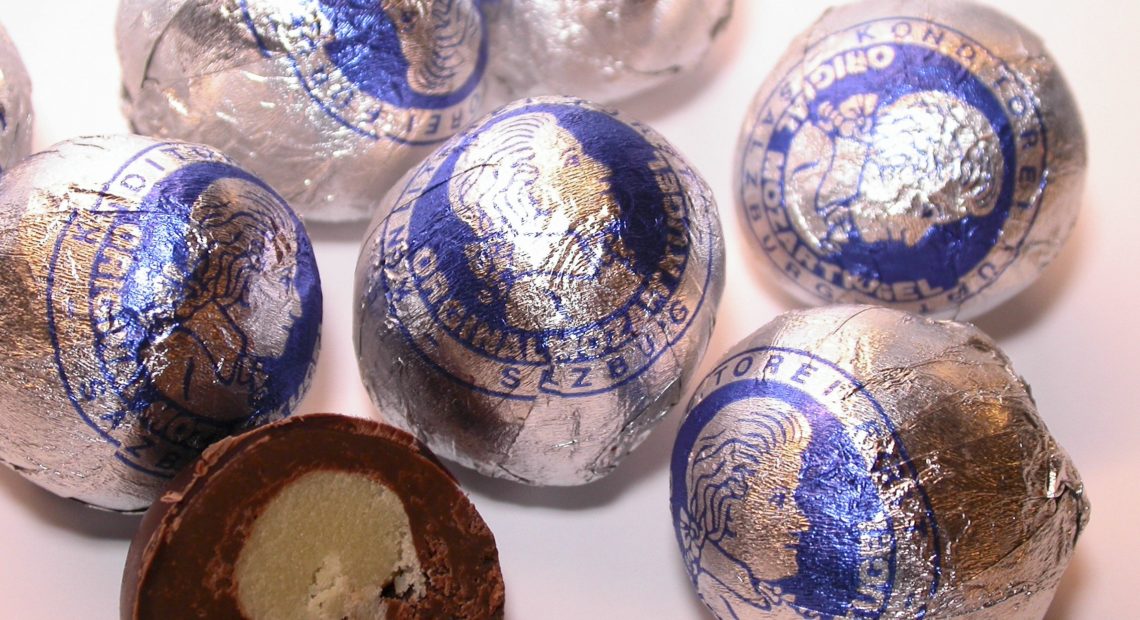 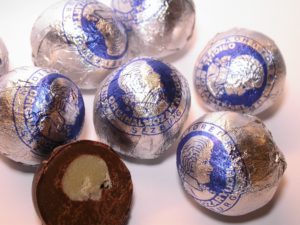 The original Mozartkugel is a rich little layered confection: pistachio marzipan enveloped by nougat, surrounded by chocolate, and wrapped in foil decorated with a portrait of Wolfgang Amadeus Mozart. It was created in 1890, in response to an invitation from the city of Salzburg to its artisans to invent things to commemorate the hundredth anniversary of the death of its famous native son, Wolfgang Amadeus Mozart. Then the candy gained an everlasting stardom of its own at a Paris food exhibition a few years later.
You could celebrate Mozart’s 261st birthday on January 27 with one of these by making a trip to Salzburg, where descendants of the confectioner who first conjured this delight, Paul Fuerst, are still making Mozartkugeln, in his original shop.
Or you could stay in the Pacific Northwest and visit Paul Fuerst’s great-great-grandson Bernard Garbusjuk, in Issaquah, where he continues the family tradition with his own Mozartkugeln at Boehms Candies. Sort of.
“My cousin Norbert Fuerst in Salzburg is the only person who has the right to the original recipe,” says Mr. Garbusjuk on the phone from a 2018 food fair in California. Garbusjuk immigrated to the United States in the mid-20th century and “entered into the world of Julius Boehm,” another European immigrant, whose candy factory and its classic Swiss Chalet grounds have drawn visitors to Issaquah for generations.
Boehm had concocted his own version of the Mozartkugel, and “I was very proud to tell him about my family background,” Garbusjuk recalls of his first interviews with the legendary Issaquah confectioner. “Boehms makes a wonderful version of the Mozartkugel,” he says, speaking now as an heir to both traditions. Garbusjuk worked with Boehm for a decade before taking over the business, which he, in turn, is passing along to his own children—the next generation of Fuerst family heirs.
He says the Salzburg original is “a little drier” in the center, while the Issaquah version puts moist almond, not pistachio, at the center. In Issaquah, the foil wrapping is gold and blue; in Salzburg it’s silver and blue. And there are other versions out there, wrapped up like colorful baubles. “Nearly everybody in Austria makes Mozartkugeln.”
Not long ago, Garbusjuk visited his cousin Norbert at the Café-Konditorei Fuerst in Salzburg, with a sample of the Boehms pistachio-free version. The quiet Austrian baker “simply smiled.”