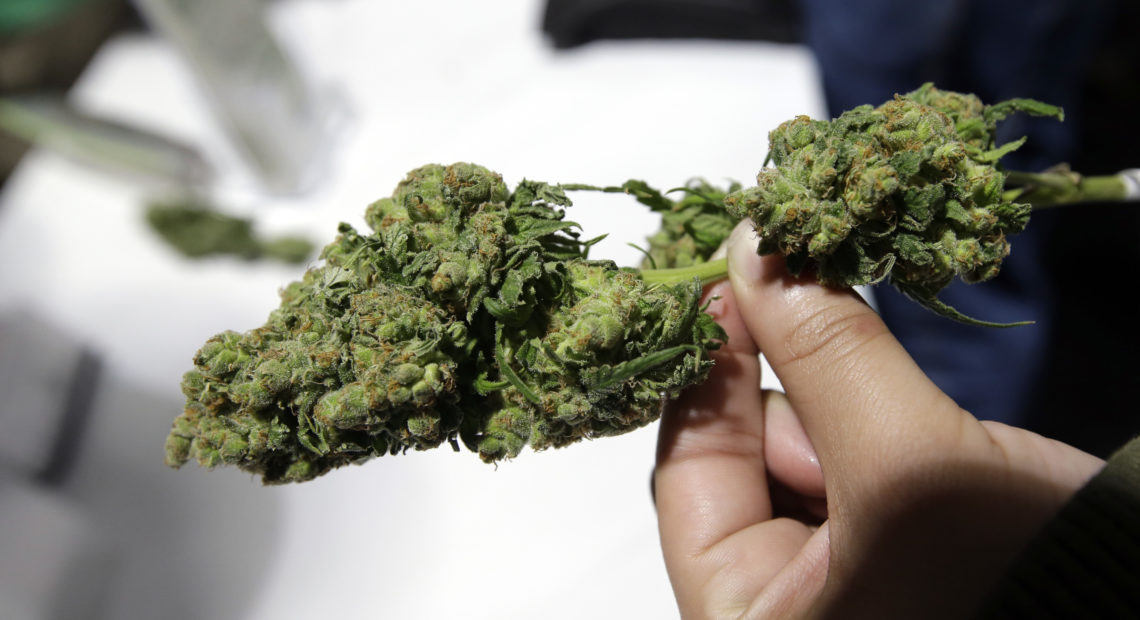 Analysis: What John Boehner’s Pivot On Cannabis Tells Us About The Legal Weed Boom

PHOTO: A passer-by examines a cannabis sample at the New England Cannabis Convention held in Boston back in March. Some polls show that six in 10 Americans favor marijuana legalization. CREDIT: STEVEN SENNE

Last week, John Boehner, the retired congressman from Ohio and former Speaker of the House of Representatives, announced on Twitter that he was getting into the weed game:

I’m joining the board of #AcreageHoldings because my thinking on cannabis has evolved. I’m convinced de-scheduling the drug is needed so we can do research, help our veterans, and reverse the opioid epidemic ravaging our communities. @AcreageCannabis https://t.co/f5i9KcQD0W

“I’m joining the board of #AcreageHoldings because my thinking on cannabis has evolved,” Boehner wrote. “I’m convinced de-scheduling the drug is needed so we can do research, help our veterans, and reverse the opioid epidemic ravaging our communities.”

That John Boehner, of all people, is now a proponent of cannabis perfectly illustrates the ironies of the way Americans think about weed as the industry slinks out of the gray market. The people positioning themselves to profit from the nominally legal weed boom are overwhelmingly white, but the people who continue to be punished for its illegality — in part, due to policies that Boehner has supported — are most likely to be black.

Acreage Holdings cultivates and distributes cannabis across 11 states, and as such, hopes to to roll back federal restrictions on the drug. Landing a partner with Boehner’s influence and connections in Washington qualifies as a coup. But it’s a startling about-face for Boehner, who in 2011 said he was “unalterably opposed” to the legalization of marijuana. In 1999, he voted against legalizing medical cannabis use in Washington D.C.; in 2015, Boehner wrote to a constituent that he didn’t want to reschedule, or reclassify, cannabis as less dangerous under federal law, because he was “concerned that legalization will result in increased abuse of all varieties of drugs, including alcohol.” (Under the current drug classification system, the federal government considers weed as dangerous as heroin and more dangerous than cocaine.) At one point, NORML, one of country’s leading marijuana legalization lobbying groups, considered him enough of a hardliner on legalization that it gave him a zero-percent approval rating for his Congressional voting record.

Marijuana currently occupies a curious, paradoxical position in American life. As cannabis use has lost much of its stigma — nearly six in 10 Americans believe it should be legalized — it has also become an ever-larger focus of drug enforcement policy: today, more than half of all drug arrests in the United States are marijuana arrests.

But even before cannabis gained wide acceptance, the stigma attached to —and its consequences — have never been evenly distributed. As we’ve explored on the Code Switch podcast, anti-immigrant lawmakers in the early 1900s both exaggerated the cannabis’s deleterious effects and began purposely using the name marihuana in order to link the drug’s dangers with Mexicans. Harry Anslinger, the head of the agency that would eventually become the Drug Enforcement Agency — and incidentally, an unabashed racist — used his platform to try to associate weed with jazz musicians in the public mind, and thus, implicitly to black people. It was Anslinger who is largely responsible for cannabis being declared a Schedule-1 controlled substance by the DEA, meaning it is has “no currently accepted medical use and a high potential for abuse.” The burden of that stigma has always fallen hardest on black folks, who are four times as likely to be arrested for weed as white people, although there’s no evidence that Black folks are more likely to use it.

And those disproportionate arrests for weed-related crimes mean that Black people with experience in the underground weed economy are much more likely to be locked out of participating in the burgeoning legal marijuana industry, since investors are wary of getting into bed with people who have been caught. Black people bore the brunt of the drug war; now they’re now being shut out of the weed boom.

The consequences of discrimination shape the demographic landscape of the legal weed industry in other ways, too. Because Cannabis is a federally controlled substance, banks are barred from partaking in the weed economy. That means legal weed entrepreneurs have to hang their shingles without the aid of business loans. That makes things even harder for prospective Black weed entrepreneurs, who have little wealth to pony up for startup costs because they’ve been historically denied avenues to create it.

Of course, absolutely none of these obstacles is a problem for the lachrymose John Boehner, a millionaire who was until recently one of the most powerful elected officials in the country. From that perch, he was uniquely positioned to change the legalization debate in Washington; he voted instead for the status quo. Boehner’s evolution, however sincere, comes in time to help people who see cannabis as a promising business opportunity. But it comes much too late to help the people who have spent decades experiencing it mostly as a matter of criminal justice.