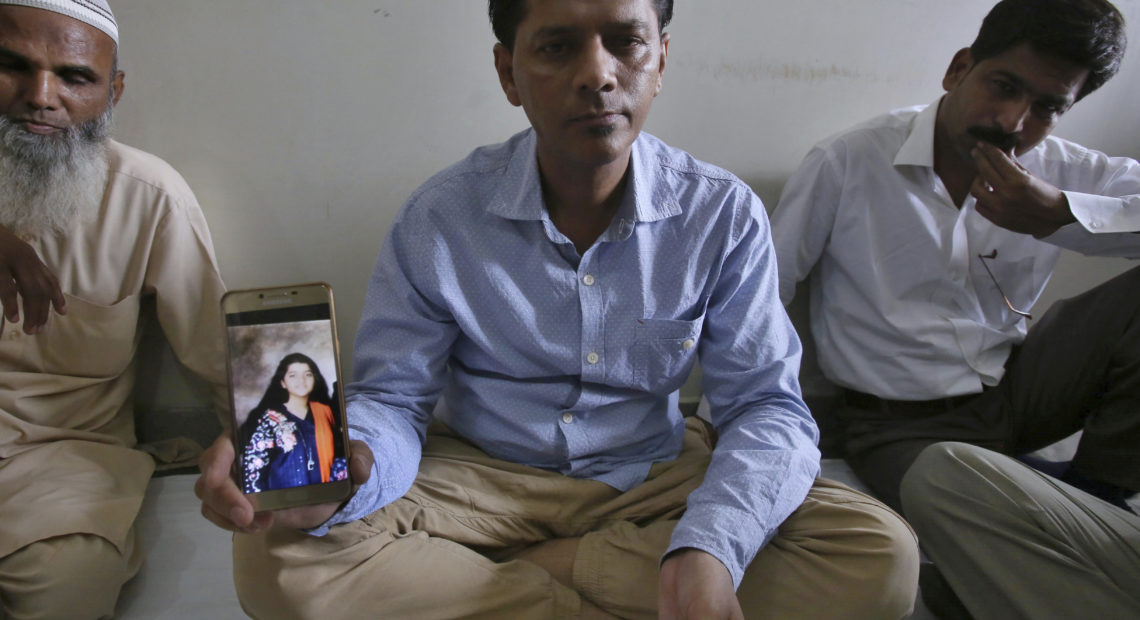 ‘We Were Expecting That She Will Return Alive’: Family Mourns Pakistani Student Killed In Texas School Shooting

PHOTO: Abdul Aziz Sheikh (center), the father of Sabika Sheikh, a victim of a shooting at a Texas high school, shows a picture of his daughter in Karachi on Saturday. CREDIT: Fareed Khan/AP

A Pakistani exchange student was one of the 10 people shot dead in the Santa Fe High School shooting on Friday. She came from a country where militants have attacked schools and killed students, so her death — in a country that once seemed so much safer than Pakistan — shocked many in her home country.

Sabika Sheikh, 17, was in Santa Fe through a State Department exchange program that is meant to foster better understanding of Muslim culture. Her participation in the program reflected Sheikh’s ambitions: she wanted to be a diplomat, says her 60-year-old great-uncle Abdul Jalil Albasit.

She was meant to return to her home city of Karachi next month to celebrate the end of the holy Muslim month of Ramadan with her family.

Her father Aziz Sheikh says he watched the shooting unfold on CNN as he and his family ate iftar — the evening meal that breaks the day-long fast that Muslims undertake every day during Ramadan. Traditionally, it is a time when families gather.

Sheikh, a businessman in his mid-40s, told the Pakistani news channel Geo that he had contacted the local coordinator of his daughter’s exchange program. “I kept in touch with him for the next two or three hours. I kept calling him and he kept calling me,” he said. “Then, around three in the morning – he confirmed that she’s dead.”

Muslim funeral prayers for Sheikh were already held on Sunday. She will be buried in Karachi as soon as her body is repatriated, expected by Wednesday.

Albasit says Sheikh’s parents were aware of school shootings in the U.S., but they never thought it would happen to their daughter.

“We were confident that Sabika will be very much safe there,” Albasait tells NPR.

For decades, ambitious Pakistani parents have worked to send their children to the U.S. and Europe for an education. It is seen as opening up lucrative opportunities in Pakistan and the possibility of citizenship abroad. Plus, the U.S. seemed safe after years of militant attacks in Pakistan.

Pakistani parents have had to contend with deadly risks when sending their children to local schools. Militants have killed thousands of people in Pakistan since 2001. In 2014, Taliban gunmen stormed a school run by the Pakistani army and killed more than 140 people. Two years before that, in 2012, Taliban gunmen boarded a bus and shot Malala Yousafzai, then 15, in the head. They were angry that she was promoting girls’ education. She survived, and in 2014, was awarded the Nobel Peace Prize.

Albasit, Sheikh’s great-uncle, said despite the tragedy of losing a family member, he would still support any of Sabika’s three younger siblings if they wanted to study in the U.S.

“If any children of our family will get any such opportunity, we should allow him or her to proceed,” Albasit said. He said life was ultimately in the hands of God.

In a upscale market in Islamabad, other Pakistanis tried to make sense of the Texas school attack.

“I’ve actually lost somebody in a terrorist attack,” said Akbar Durrani, a 40-year-old employee at the United Nations. “Someone very, very close, so I know how it feels and I know it can easily be someone around you.”

Still, he says, he never imagined a Pakistani student would be a victim of a school shooting in America.

“It seems like it wouldn’t happen to people who go to the U.S.,” Durrani said. “But this time around, it kind of hit home that it could happen to anyone.”

Madiha Kausar-Butt, a 26-year-old homemaker, was strolling through the market with her husband. The attack, she said, taught her that “life is uncertain … Even in America now, you don’t know what’s going to happen next.”