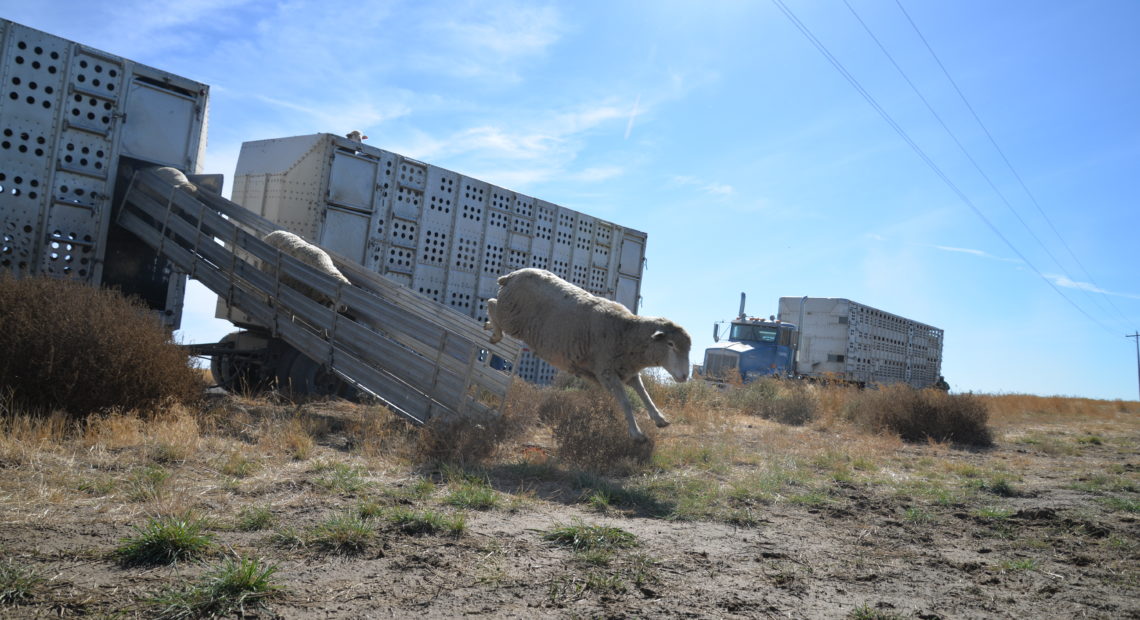 For Mark and Nick Martinez, sheepherding starts in the dark of night. And far from any actual sheep.

Three in the morning and the Martinez brothers are up and moving on their ranch in Moxee, Wash., 20 minutes southeast of Yakima.

By 4:30 a.m. we’re on the road to the high country. I follow their two trailers on dark, winding roads, and a couple hours later before the sun has fully risen, we get to it: a clearing in the woods.

There’s a small cabin next door and a few trucks parked outside. But what really grabs the eye is the concentrated cloud of white against a backdrop of green.

A flock of 800 sheep calmly sleeps in the chilly September morning. They’re surrounded by stately firs and pines of the Okanogan-Wenatchee National Forest. Mist hangs low on the mountains, creating a scene that feels like it’s from another time.

And that’s because it is.

Mark and Nick Martinez are the third generation in their family to continue a legacy of sheep ranching.

Their grandfather, Simon Martinez Sr., was a Spanish immigrant who began his own sheepherding operation in the U.S. In fact, Martinez Sr. started his own flock because another sheep herder didn’t have the money to pay him. So he paid Martinez Sr. in sheep.

Now nearly a hundred years later, the brothers continue their family tradition with their kids and wives. These sheep are the last permitted operation allowed to graze on federal lands in the state.

Today, this flock will travel hundreds of miles from the high terrain of the federal Forest Service land near Lake Wenatchee, southeast to the flat, irrigated pastures of Connell. It’s a three-hour drive, not short for the sheep or the herders.

But it’s a major part of the work of grazing sheep: finding fresh pastures.

This is a peek into how they do it. 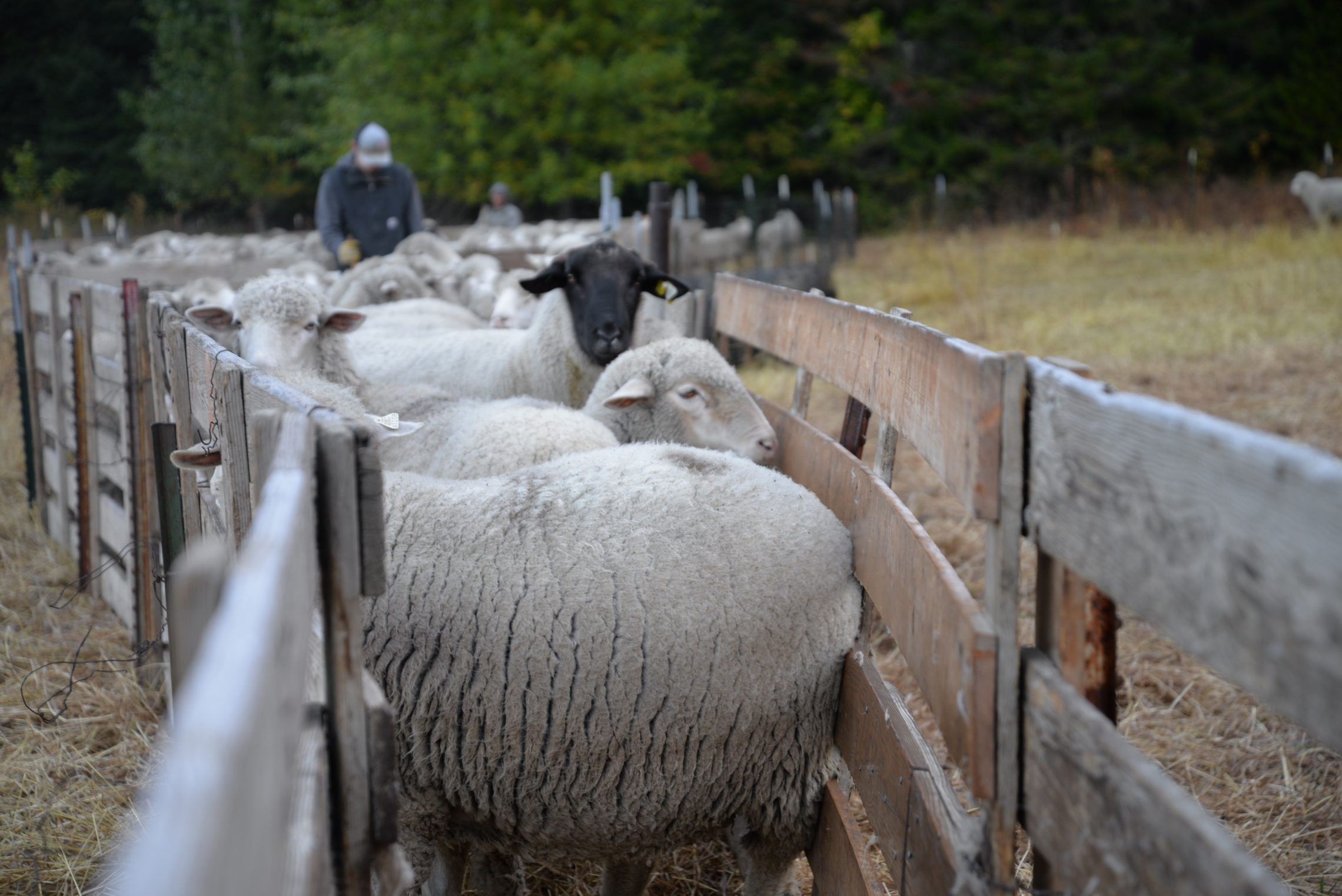 Sheep wait in single file line to board a trailer. They’ll travel over 150 miles in one day to graze on the green, irrigated pastures of Central Washington. CREDIT: ESMY JIMENEZ 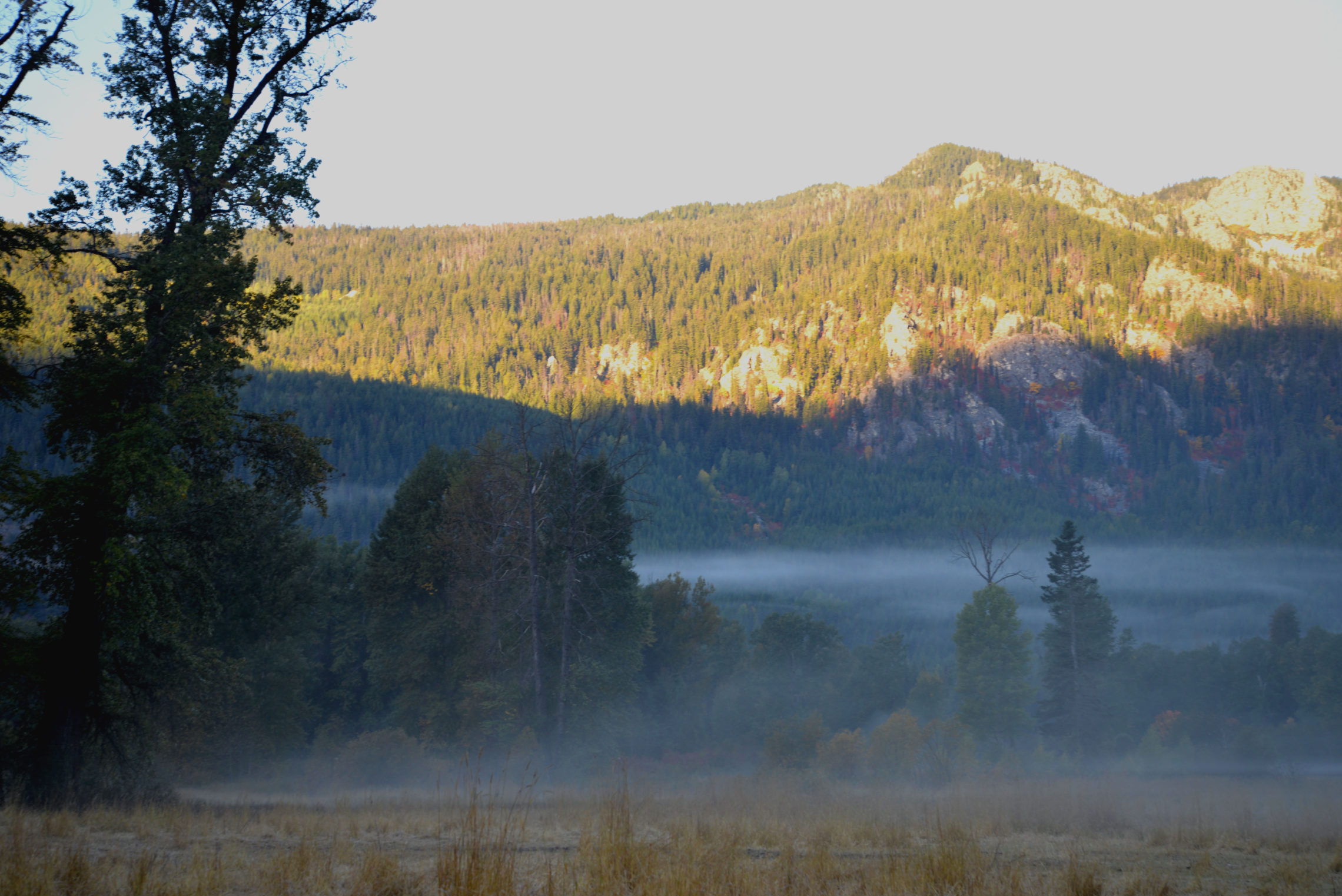 Mist hangs low, silhouetting the trees of the Okanogan-Wenatchee National Forest. But as the sun rises, it dissipates and melts the frost on the grass. Sheepherders are used to all weather conditions: rain, snow, or sun, their operation carries on. CREDIT: ESMY JIMENEZ 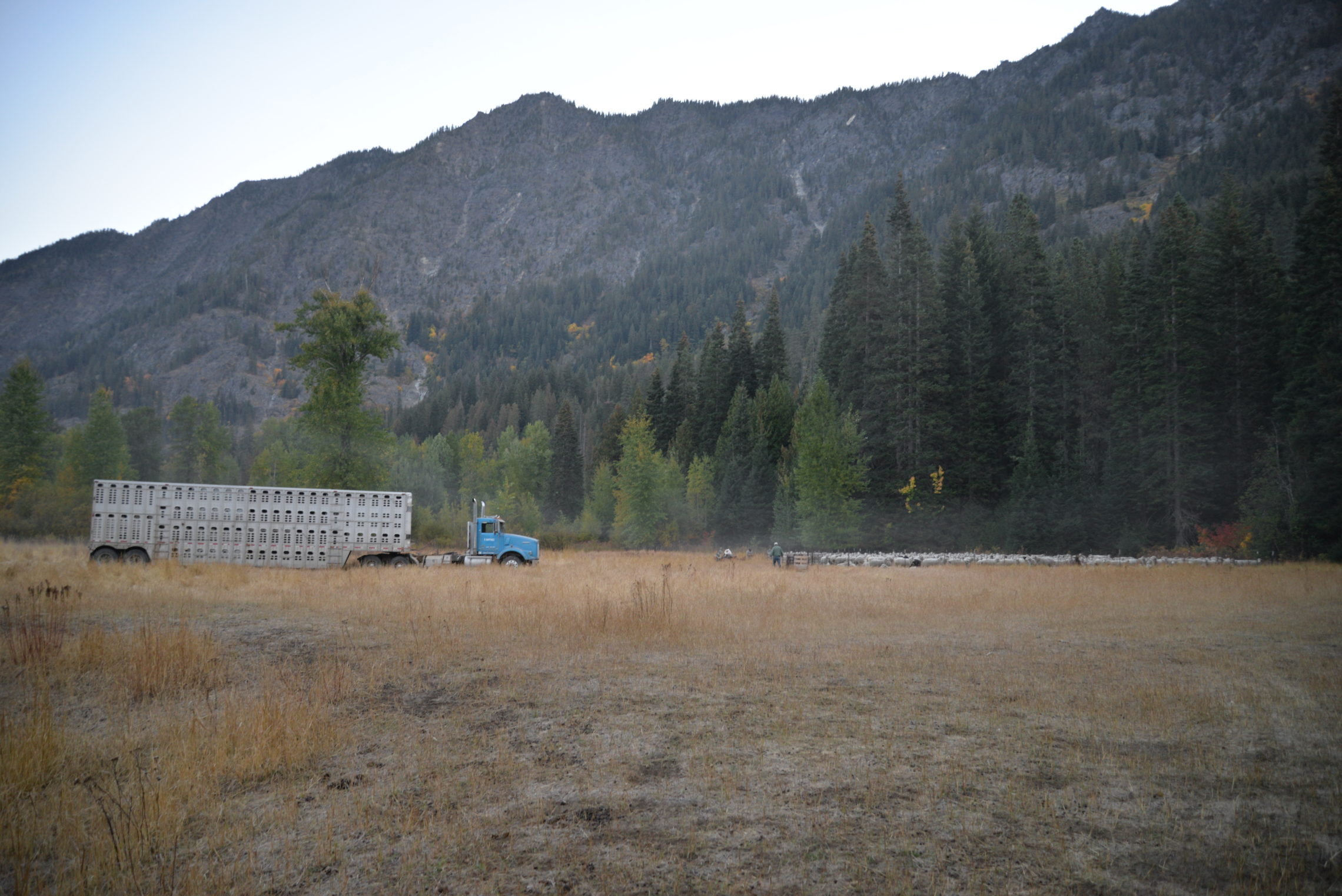 The S. Martinez Livestock operation is three generations in the making. Mark and Nick Martinez are brothers and sheep ranchers. This fall morning, their blue tractor-trailer will transport around 800 sheep from high country mountainous terrain to the green pastures of Connell. CREDIT: ESMY JIMENEZ 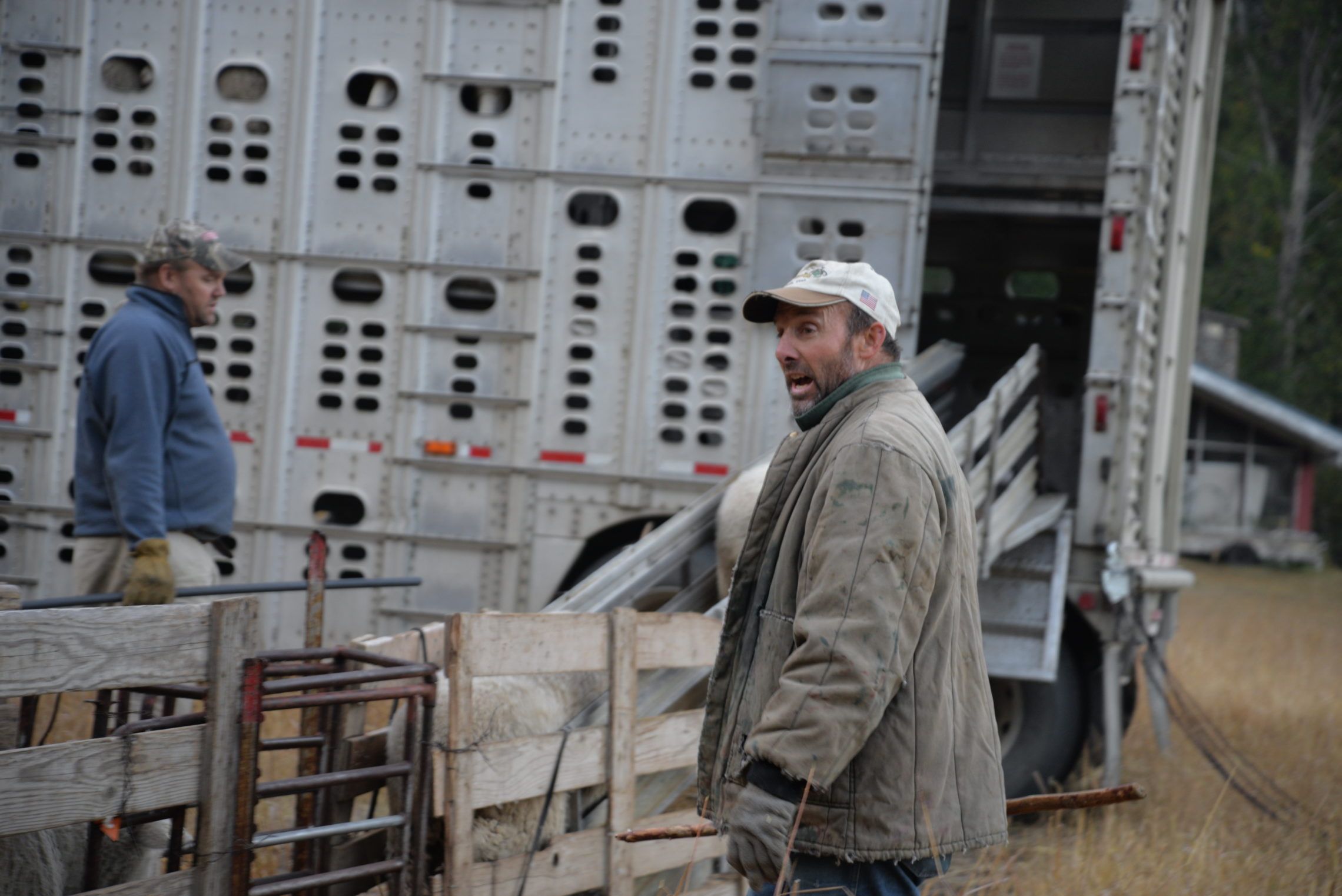 Mark Martinez bellows out out, cajoling the sheep up the ladder and into the truck. His brother Nick stands in the background and watches for any stubborn sheep that hold up the line. CREDIT: ESMY JIMENEZ 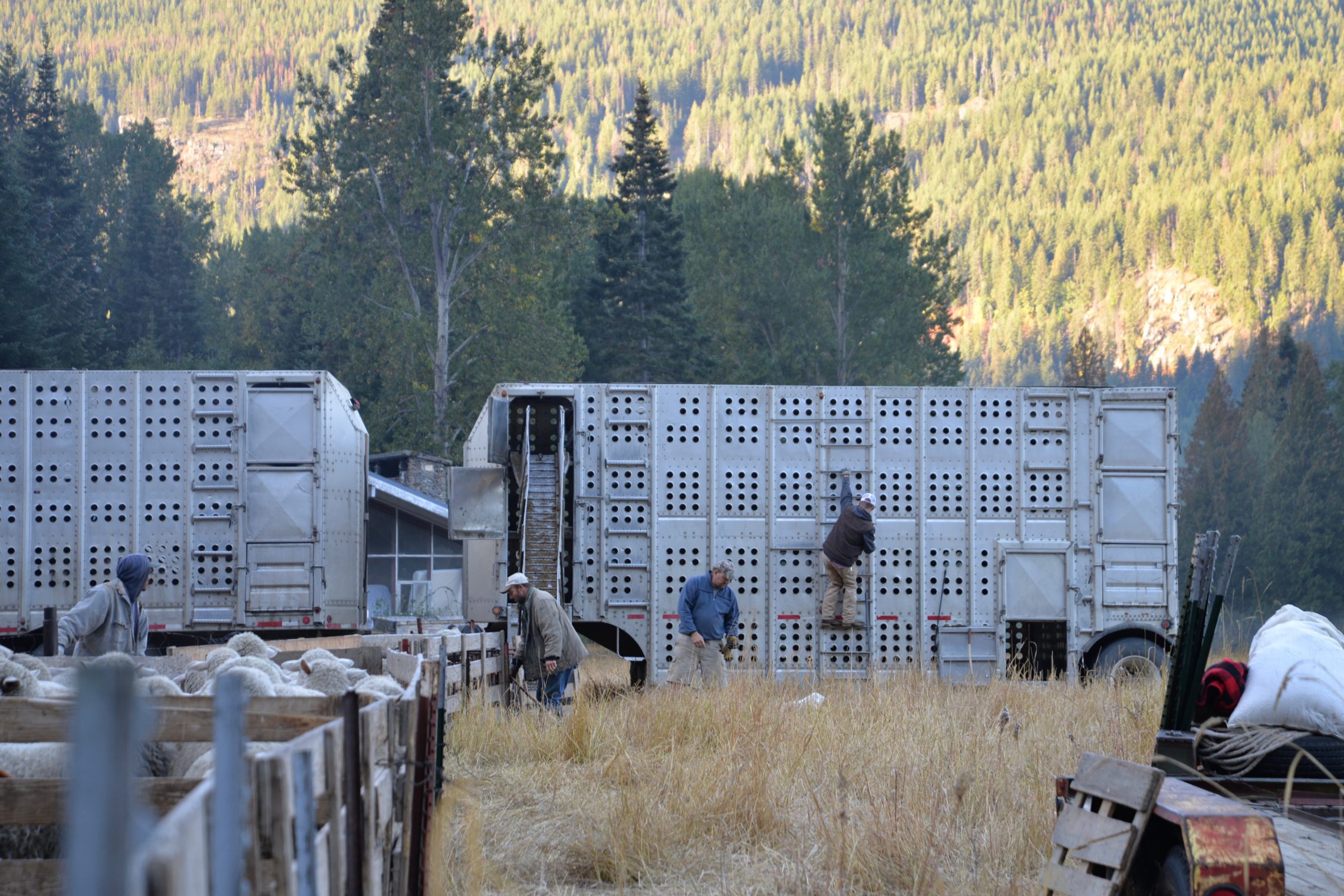 Sheepherding is labor intensive. The Martinez Brothers hired eight H-2A temporary workers this year. Most are from Peru and have been working with the Martinez family for decades. The herders stay for almost a year at a time and then return home for a couple months. CREDIT: ESMY JIMENEZ 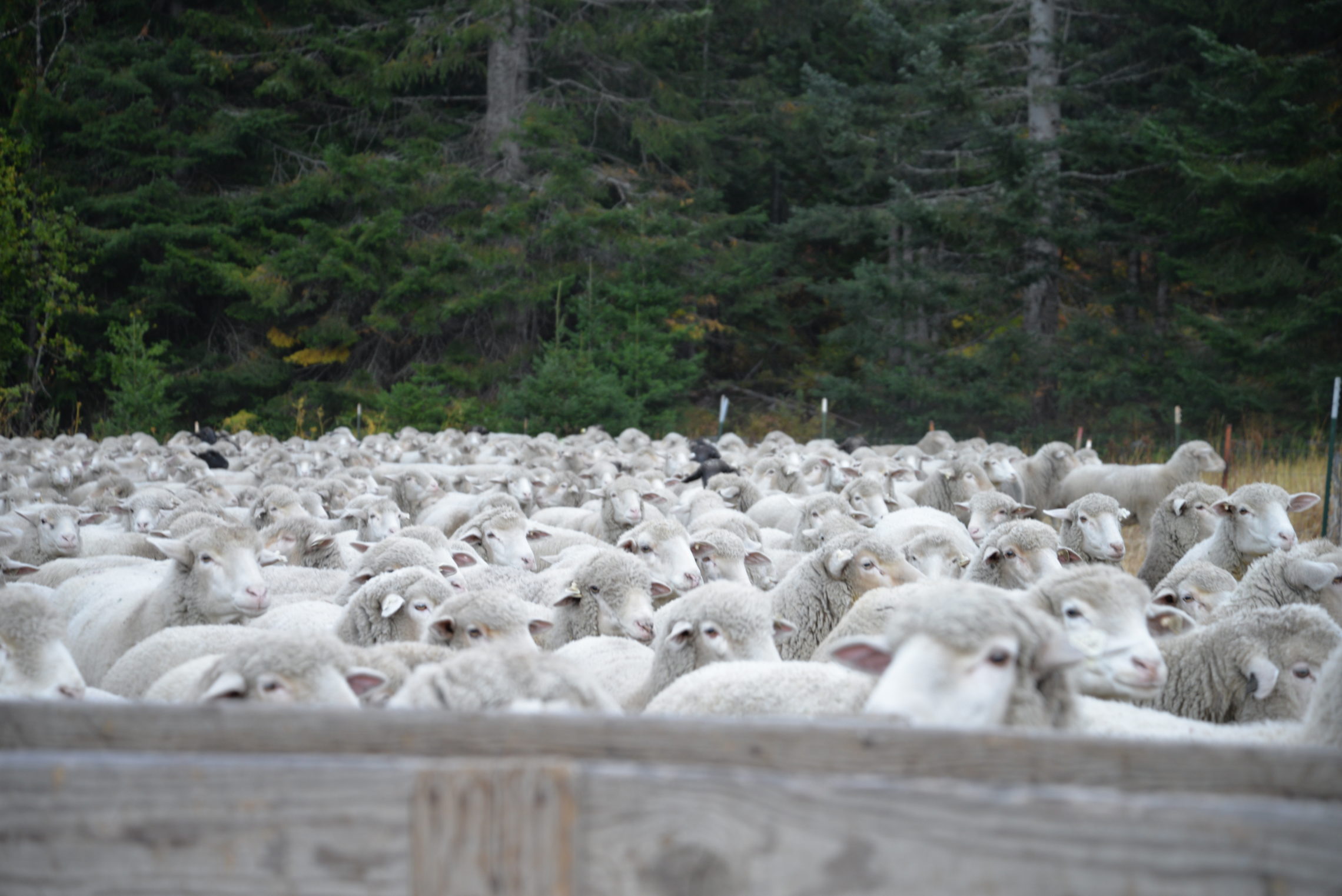 Because there’s so many sheep to move, herders have a few tricks to keep count. One method is to count the number of black sheep. Because there aren’t as many black sheep, herders know they might be missing part of their flock if there are fewer black sheep when they do their counts at the end of the day. Another method is to put bells on a few sheep or even mark their wool by painting numbers on them. CREDIT: ESMY JIMENEZ 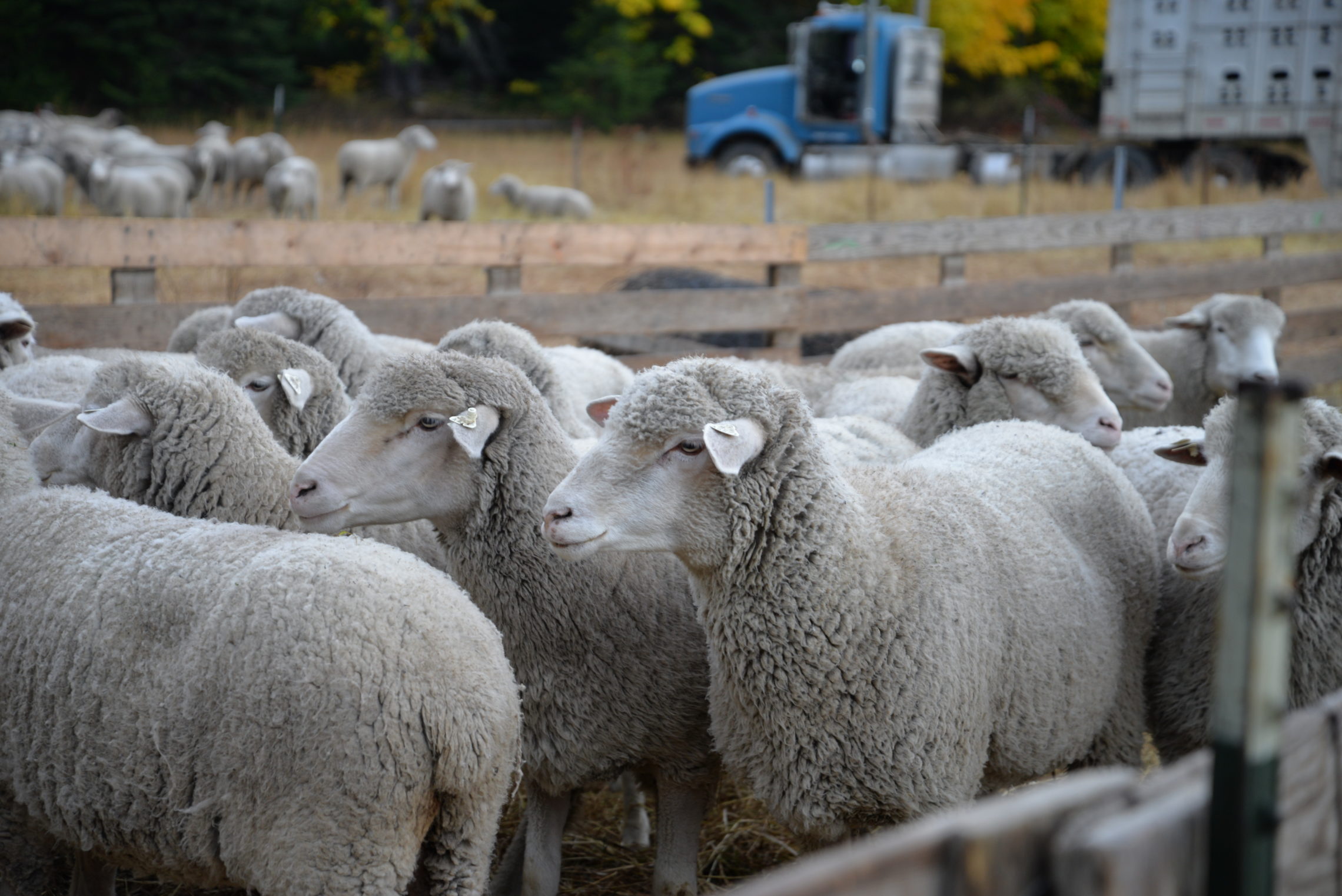 Sheep wait nervously in a pen. The moving operation in the morning takes around an hour as the sheep are herded into smaller clusters and moved into single file line where they then walk up a ladder into a trailer. Inside the trailer, another herder packs the animals around as efficiently as possible. The work is long, even with the help of six workers and a few dogs. CREDIT: ESMY JIMENEZ 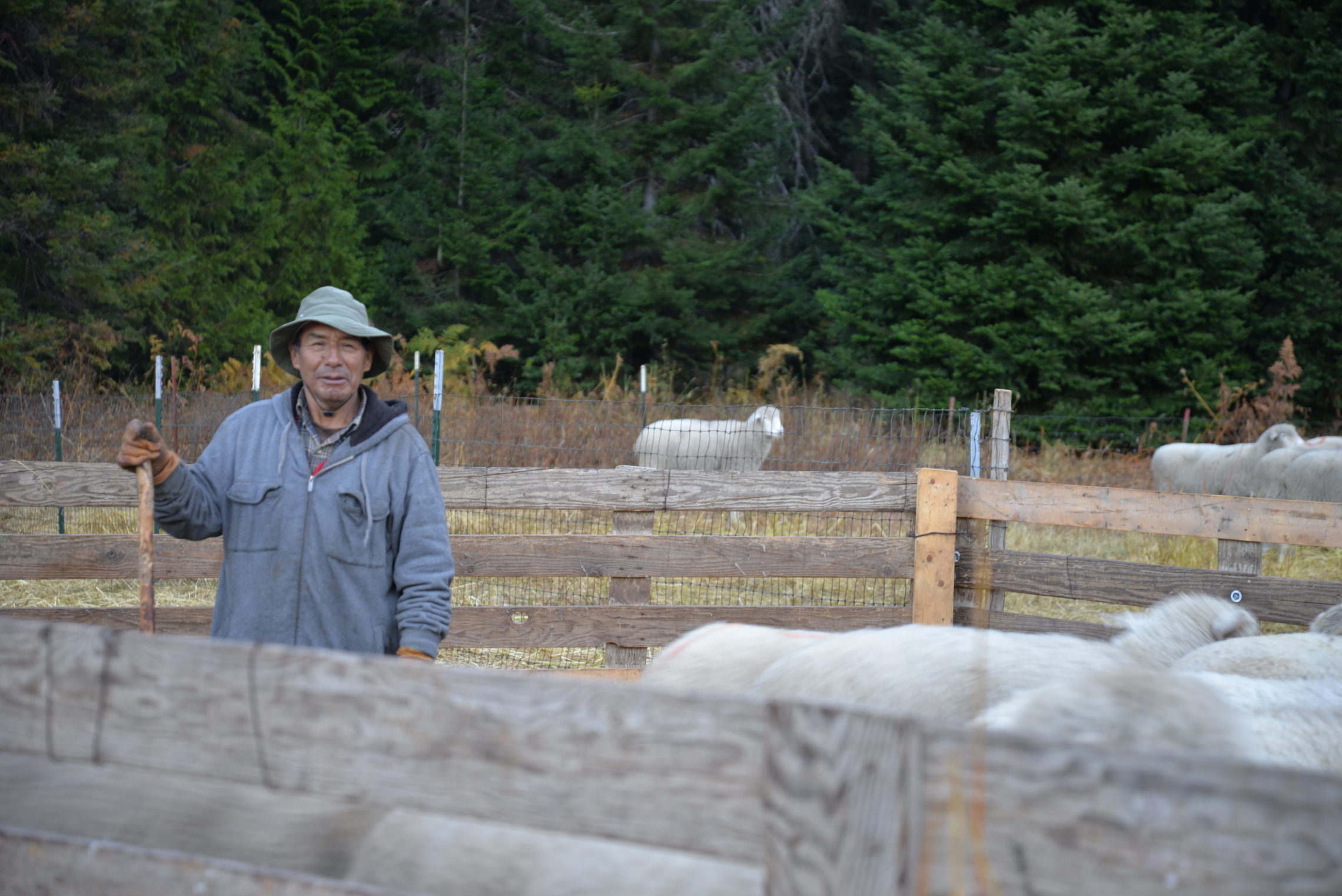 Geronimo DeLaCruz Lozano is one of the eight, H-2A workers who came from Peru to work with the Martinez family. He’ll spend most of his time alone with his dogs, walking across grasslands and mountains grazing thousands of sheep at a time. CREDIT: ESMY JIMENEZ 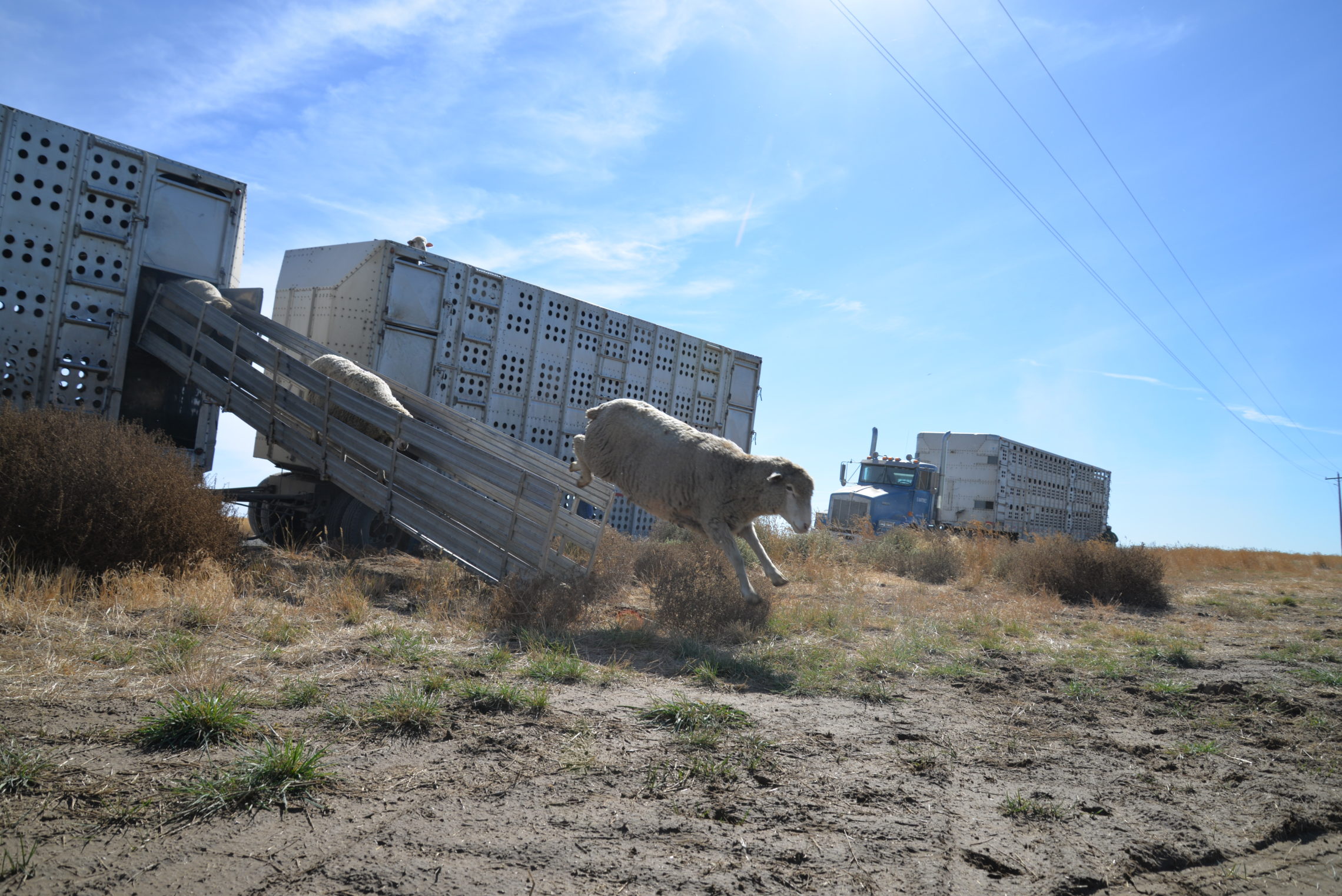 Despite the time it took to wrangle the sheep into the trailers, the going out process is much faster. After a three-hour ride, the sheep are also ready to move around and get to fresh grazing grounds. If you look closely, you can also see an eager sheep peeking its head above the trailer. CREDIT: ESMY JIMENEZ 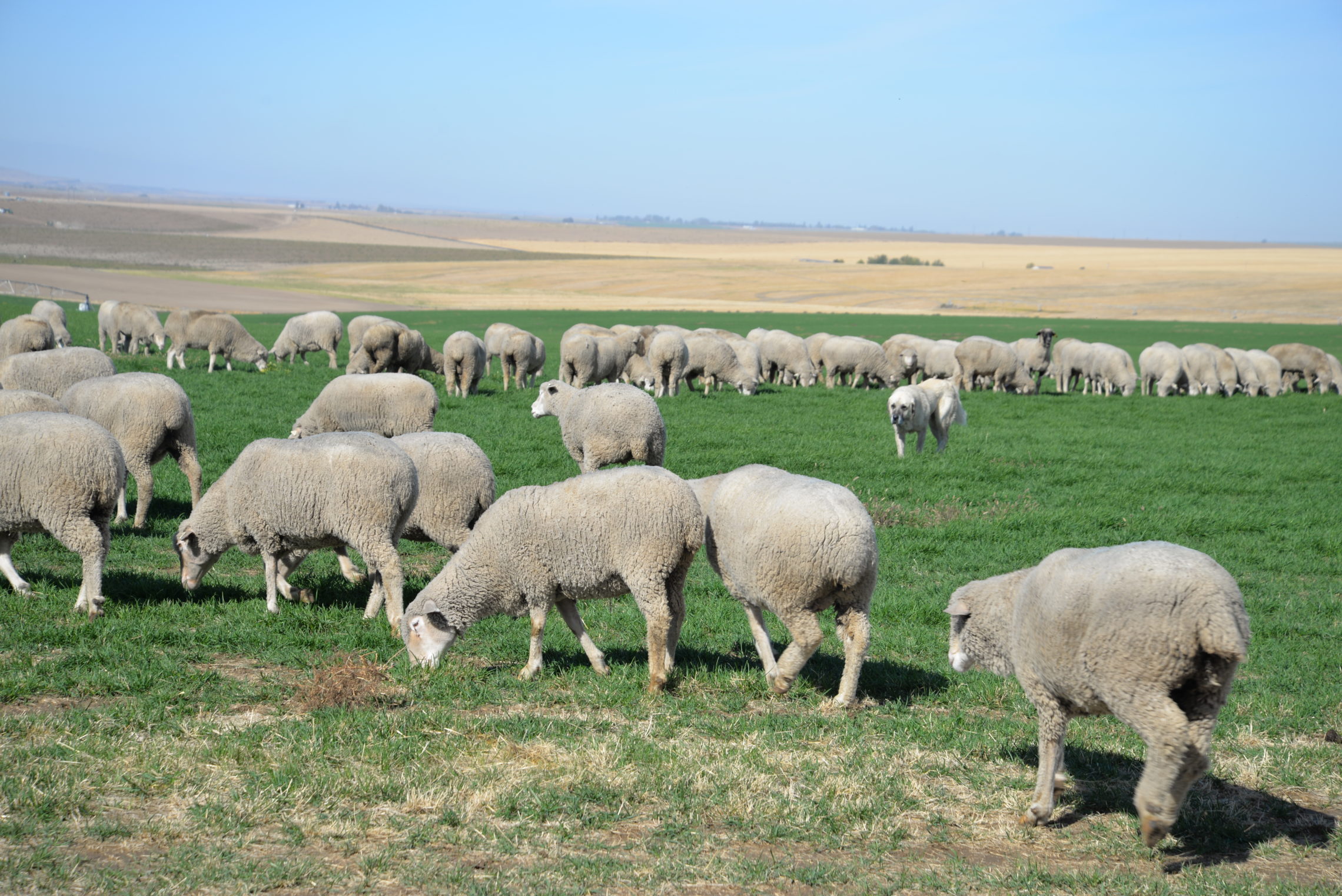 A white sheep dog aptly named Pastor, blends into the flock. Herders usually have five or six dogs with them to help move the sheep. The dogs are also good company during the long, lonely days and help deter predators like wolves or cougars. CREDIT: ESMY JIMENEZ 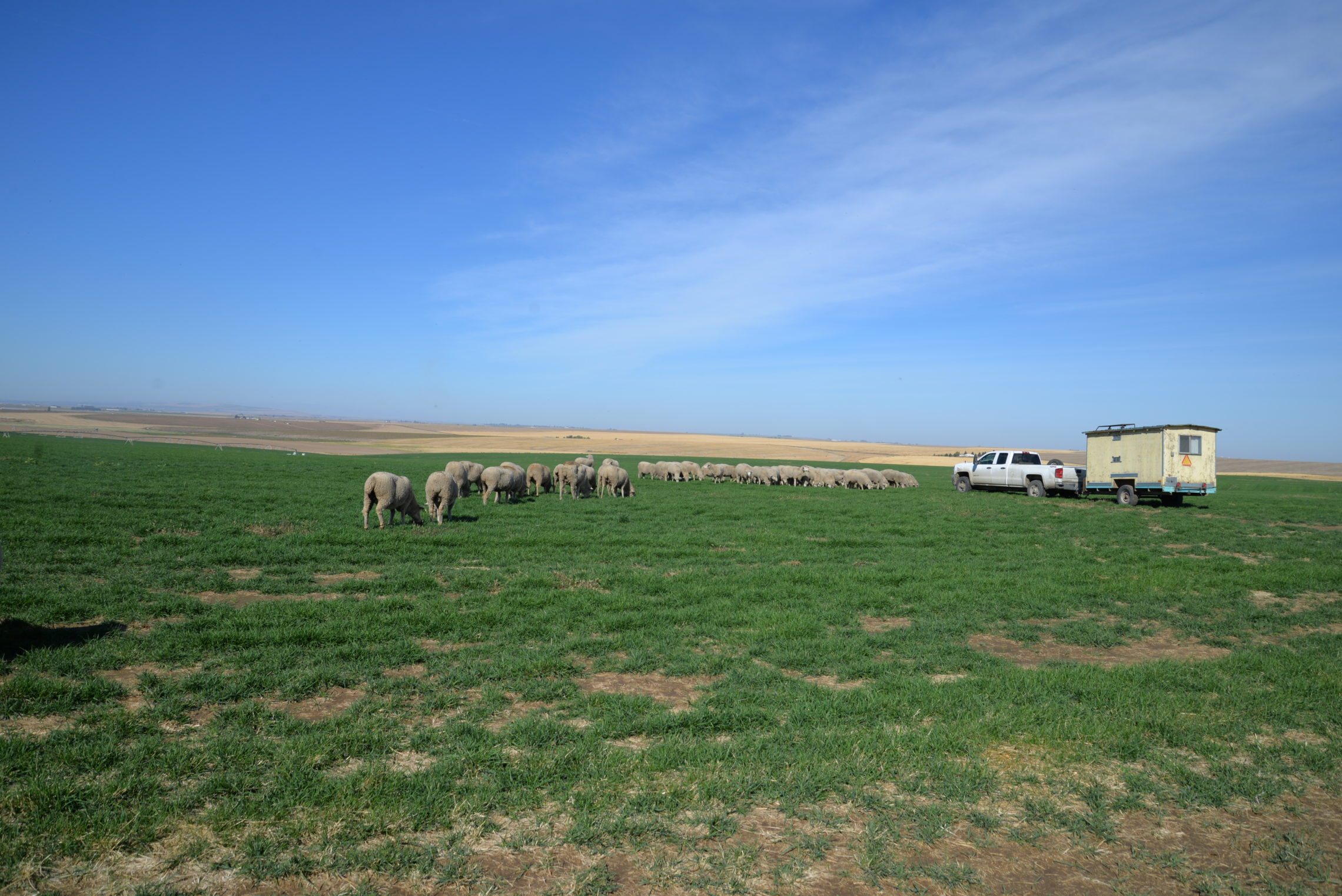 An emerald pasture in Connell, Wash., will host the sheep for a few weeks before they move on to their next home. The sheep spend most of the late spring and summer in the high country terrain. Toward the fall, they move into irrigated pastures and in the winter, they come home to the Yakima Valley where they’ll be sheared, and lambing begins. CREDIT: ESMY JIMENEZ 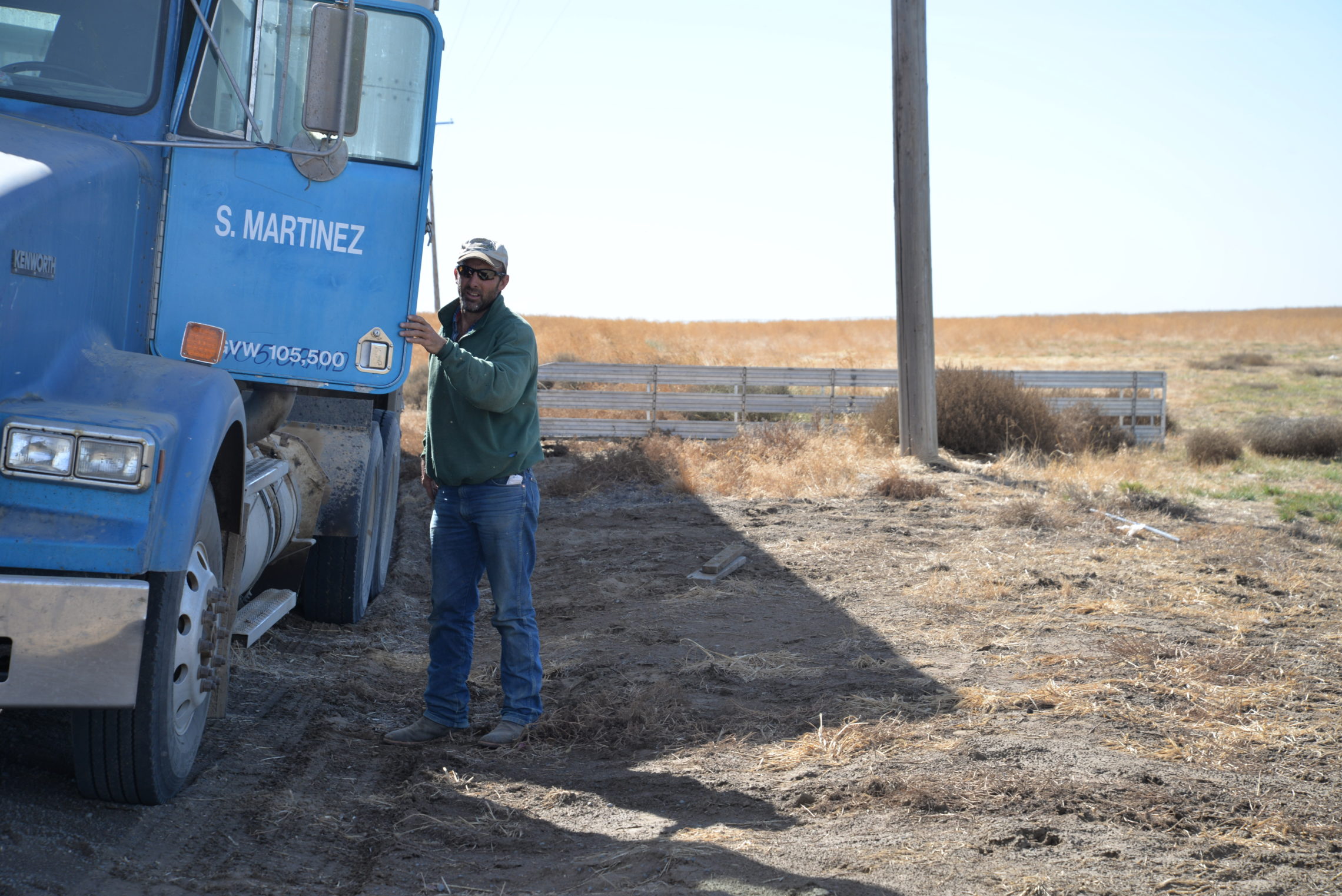 Mark Martinez packs up after a long day. When he’s not moving sheep, he’s delivering food and water to the herders and their dogs. Depending on the season, Martinez could also be shearing wool or even catching newborn lambs. CREDIT: ESMY JIMENEZ