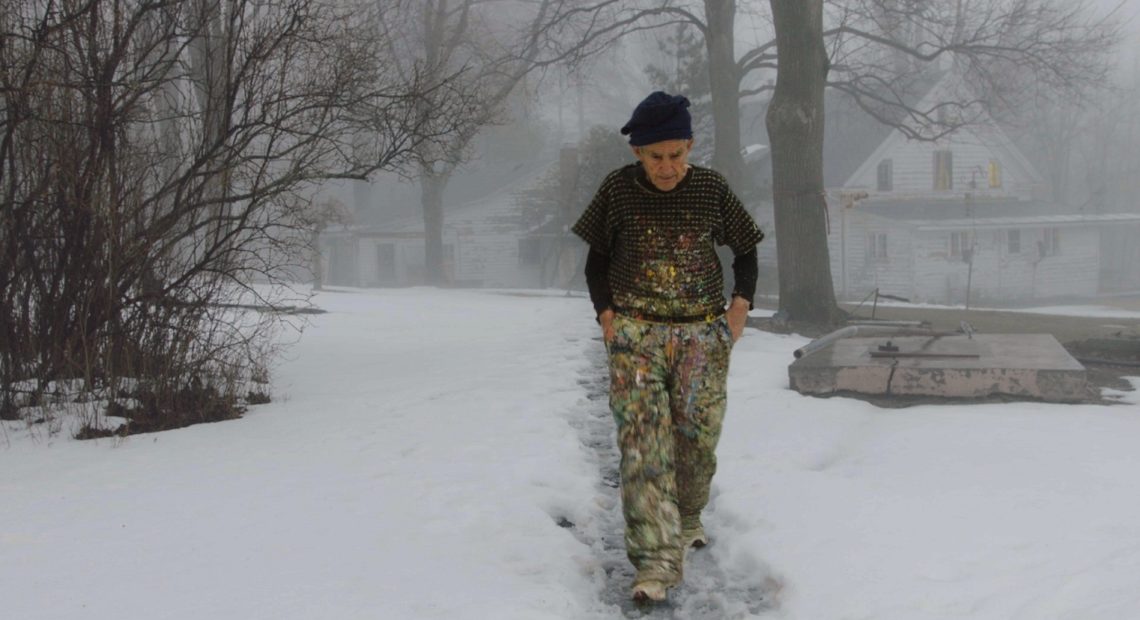 PHOTO: Abstract artist Larry Poons is enjoying a late-career resurgence of interest, decades after his optical dot paintings attracted acclaim in the 1960s. Poons is a key figure in the documentary The Price of Everything. CREDIT: HBO Documentary Films

Even if you don’t follow the art scene, you might have heard about the wild incident at a London auction a few weeks ago when the street

artist known as Banksy was selling a screen print.

The minute the hammer came down and the piece was sold — for nearly $1.4 million — the canvas started self-destructing because Banksy had installed a shredder inside the frame. There’s now speculation that the piece might be worth even more after the stunt.

It’s a telling anecdote about the current boom market for contemporary art. Appropriately, a new documentary called The Price of Everything is now being screened in New York City and coming to HBO in December. The film explores the relationship between art and money, following collectors, dealers, auctioneers and contemporary artists.

Painter Larry Poons is a big part of the film. On screen, he says:

Art and money have no intrinsic hookup at all. It’s not like sports, you know — your batting average is your batting average. You know, that’s the bottom line, you know. And they’ve tried to make it much like that, like the best artist is the most expensive artist, same thing.

In an interview, director Nathaniel Kahn is sympathetic to that point of view.

“I think we need to disconnect this idea that the price of something is the same thing as its value,” he says.

On the explosion of the contemporary art market

Sure, well, there’s always been a connection between art and money from the beginning. It was true in the Renaissance, I’m sure it was true in the Classical period. It’s been true throughout history — there have been patrons, and artists need to live, and they want to sell their work. But in the last couple of decades, we’ve just seen this explosion of the commodification of art, where art is being traded like a stock, like an asset, and art is even seen as an financial instrument. And to me, that’s fascinating, but it’s also terrifying. So something that’s fascinating and terrifying makes for a good subject for a film.

Well, I think everyone is a little queasy about it. And it’s kind of interesting because art, somehow, we feel — there’s this gut instinct that art should be pure. When art becomes commodified, something’s wrong. Well, in fact, something is wrong. … Art, as always, is revealing who we are, and revealing our current obsessions, and holding a mirror up to us and saying: This is pretty scary, right? Where something that we’ve always thought of as a container of beauty, this communicator of our souls — you know, art — is being used as if it were a poker chip.

But not everybody in the film is queasy about it. I mean, there are people in the auction world who are very excited by it, understandably. This is a boom market right now for art. It’s never been like this before. Is it a bubble? I don’t know. We’re looking at that. That’s part of what the film looks at.

Well, we should care about art. And ultimately, the reason I wanted to make this film was to remind everyone, to remind all of us, that ultimately, art is something that is essential to human life. We can’t do without it. And so ultimately, art will prevail. We’re living in a time right now where everything is commodified, and it’s really scary, because there’s way too much money in the hands of way too few. And art has become a little bit of a pawn in that game.

On the statements in the film to the effect of: “there is no golden age without the gold”

Is it true? Is there no golden age without gold? I’ve been to places with this film who are suffering far more financially than we are, and yet their art is more exciting than a lot of what I see here. I’ve seen art on the street — you know, talk about Banksy — I’ve seen graffiti art in a place like Athens that’s completely stunning. It’s as marvelous as much of the art you see in museums. That’s not commodifiable — it’s expression, it’s human beings. I think it’s a little facile to say there’s no golden age without gold.

On if artists are benefiting from the boom

An artist has their process. And they have to follow it. It’s something that comes from within. It’s something you have to trust. And the moment you let in this idea that, “Oh, if I worked a little faster, maybe I’d make more money”: you’re screwed as an artist. You have to listen to that inner voice, which is the voice of your soul. So in many ways, the reason I wanted to make the film was to see the effect of money and this boom that we’re seeing right now on the artists. And so there are artists within this film who intersect in very different ways with the market. And that’s fascinating to see.

Someone like Larry [Poons], who you quoted in the beginning. Larry was at the top of the art pyramid in the 1960s. And he was making incredible dot paintings that were selling really well. He had the best art dealer in the business, Leo Castelli. And Leo Castelli said to him, “Well, just, why don’t you keep making those things? They’re selling really well.” And he said, “I’ve already moved on, man! I have a new idea.” And Castelli says, “No, you gotta keep making that old thing.”

And Larry’s response was to hold on to his soul, to withdraw, to go to upstate New York and continue making work. And for the last 40 years he’s continued to do that. Now, he’s been having this amazing resurgence, and people are seeing this new work that he’s making, and it’s blowing them away. But he’s had to turn his back on the market and say, “No, no. What I need to do: I go towards my soul.”

On the personal angle to why he made this film

I grew up in a family of artists. And I have two sisters who are artists, my father was an artist, my mother is an artist, I have an uncle and aunt who are artists, a cousin who’s an artist. And from being a little boy, I saw the struggle between art and money. And it always seemed like such a weird relationship. And this film offered an opportunity to explore that.

Eliza Dennis and Natalie Friedman Winston produced and edited this interview for broadcast. Patrick Jarenwattananon adapted it for the Web.