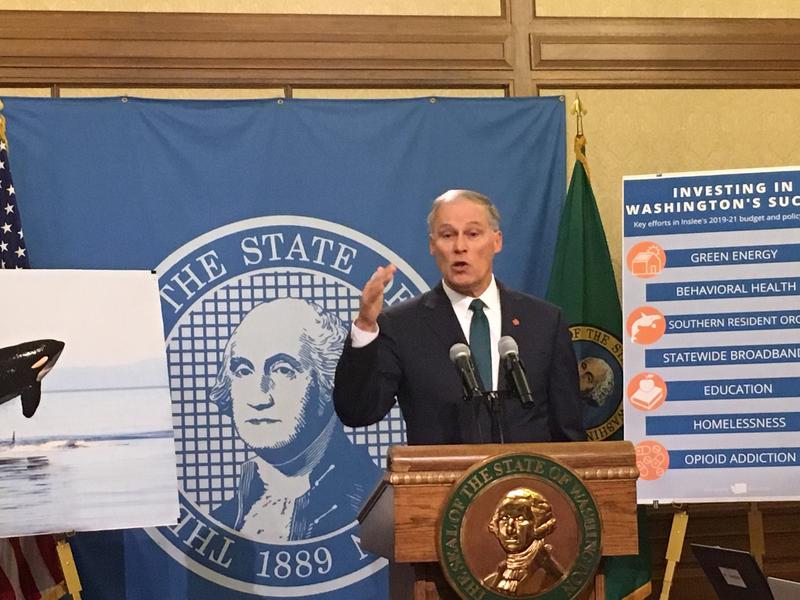 Washington Gov. Jay Inslee is proposing a hefty $10 billion increase in state spending over the next two years to maintain current services and fund new priorities, including mental health and orca recovery. To pay for his budget, the two-term Democrat is once again pushing for a new state capital gains tax on high income earners as well as an increase in the business and occupation tax on professional services.

Inslee unveiled his proposed two-year, $54 billion state budget at a news conference at the Capitol on Thursday morning. A sizeable chunk of the proposed increase in spending — $4.1 billion — is to cover the ongoing cost of complying with the Washington Supreme Court in the McCleary school funding lawsuit.

“McCleary is now the bow wave that is hitting our budget and we are not going to back up from our obligation to our children,” Inslee said.

The Washington Education Association, the state’s teachers’ union, praised elements of Inslee’s budget, including its funding of additional elementary and middle school counselors. But the union also called for even more funding.

“We still have more work to do,” WEA President Kim Mead said in a statement. “In the upcoming 2019 legislative session, we urge the Washington Legislature and Gov. Inslee to fund additional counselors, psychologists, nurses, therapists, social workers and other mental health services for all students in every public school.”

Overall, Inslee’s budget would increase the state budget by more than 20 percent during the 2019-21 biennium. At the same time, Inslee’s proposed tax increases would raise an estimated $3.7 billion over the two-year budget cycle. Besides the capital gains and business and occupation taxes, Inslee proposes to convert Washington’s flat real estate excise rate to a graduated rate to pay for the court-ordered removal of barriers to fish passage.

“This budget is asking Washingtonians to decide we care enough about our children and our future and our clean air and water to make investments to maintain those things,” Inslee said.

Under his capital gains tax proposal, the sale of stocks, bonds and other assets would be taxed at nine percent on earnings above $25,000 for individuals and $50,000 for couples. Gains from the sale of homes, farms and forestry lands would be exempt. Inslee’s office estimated that about 1.5 percent of Washington households — with average incomes of nearly $660,000 — would pay the tax in the first year.

Other major spending items in Inslee’s proposed budget include:

Inslee is also proposing major new investments to address the state’s homelessness crisis. His operating and capital construction budgets together would spend $262 million to build more affordable housing and provide housing assistance to people who are homeless.

A centerpiece of Inslee’s budget is an effort to reverse the declining population of endangered orca whales. His operating, capital and transportation budgets would spend a combined $1.1 billion on direct and indirect orca recovery efforts. That includes $58 million in clean up funds for toxic sites and $51 million to manage stormwater. The Southern Resident orca whale population dropped to 74 in 2016, a 24 percent decline since 1995, according to the governor’s office.

“Our fates are inextricably linked to the orca,” Inslee said. “Their hearts beat at sea, ours beat at land. When we see the sun glint off their black backs, we rejoice.”

In response to Inslee’s proposal, state Sen. John Braun, the ranking Republican on the Senate budget committee, accused the governor of wanting “to go on an extreme spending spree” and said Inslee’s plan is “not a serious proposal.”

Braun also objected to Inslee’s tax proposals. He noted that state revenue collections have been strong in recent months and Washington is projected to have more than $3.2 billion in reserves at the end of the current two year budget cycle. Inslee’s proposed budget would leave nearly $2.8 billion in reserves.

“If you’re an orca, a criminal, or someone who voted for the failed carbon tax in November, you probably like this budget,” Chandler said in a statement. “If you’re a small business owner, a family concerned about public safety, or the average citizen trying to make ends meet, you probably don’t.”

Inslee’s proposed budgets will go to lawmakers in January for their review. Ultimately, the Democratically-controlled will pass its own budget which will be sent to Inslee for his signature, likely next April. 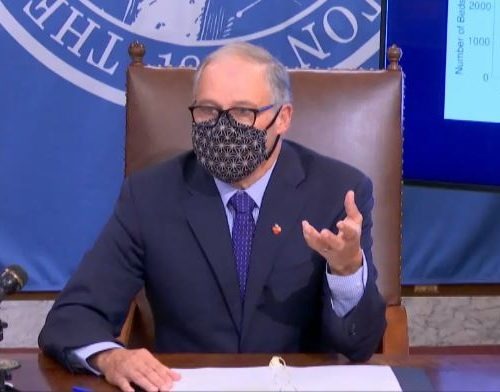 The plan includes $26 million toward the establishment of a proposed new office to conduct investigations of police use of excessive force and $2.5 million for the state Equity Office that was created by the Legislature earlier this year. The equity office — created after voters last year reaffirmed a ban on affirmative action — will help state agencies develop and implement diversity plans across state government. Continue Reading Jay Inslee Unveils Equity Proposals As Part Of Washington State Budget Plan

Washington state leaders say the earliest they would hold a emergency session at this point would most likely be after the November election, if they convene at all. It’s quite possible legislators won’t meet again until January, when their regular 105-day session is scheduled to begin. Continue Reading Why Washington Leaders Aren’t Rushing To Address The State’s Pandemic-Caused Budget Shortfall 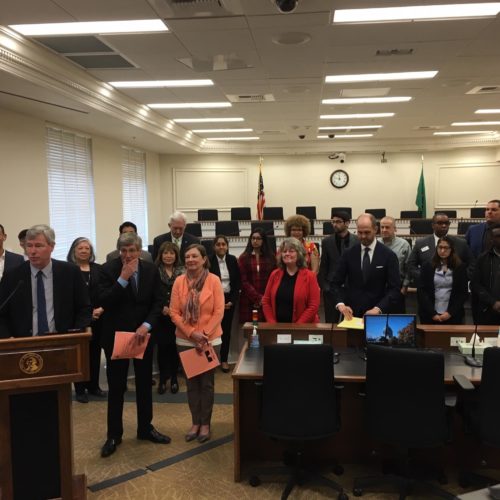