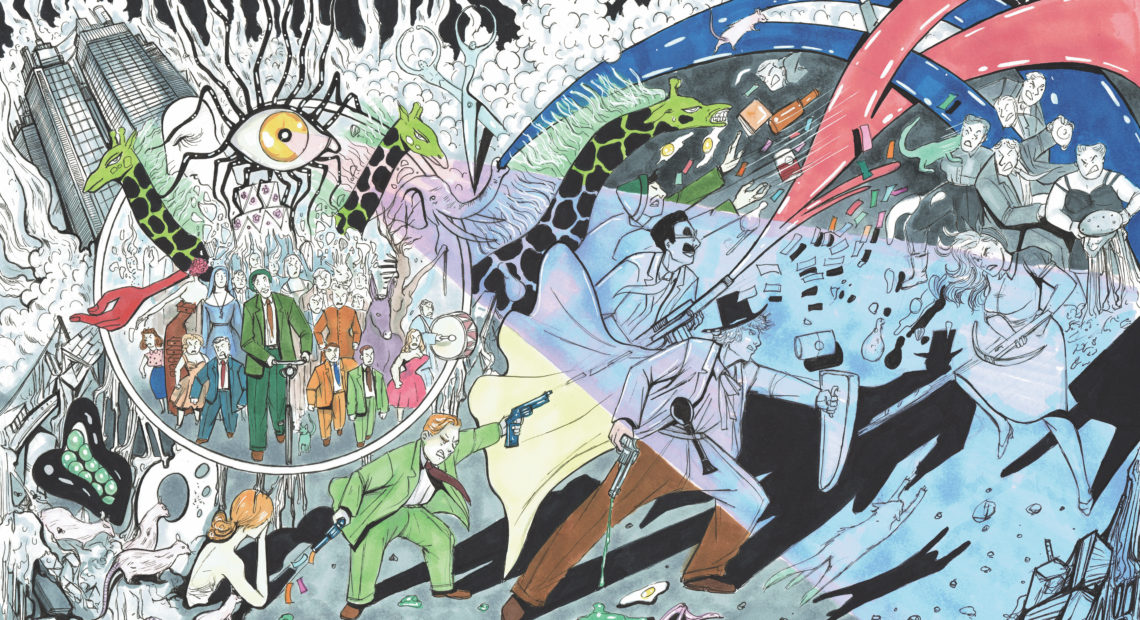 GRAPHIC: Salvador Dalí­’s idea for a Marx Brothers movie was never made — but it’s been resurrected as a graphic novel. CREDIT: Quirk Books

This is a story about something that didn’t happen. A movie that was never made. It was supposed to be a collaboration between the Surrealist artist Salvador Dalí and the Marx Brothers.

Dalí was the toast of the town in 1970 when he appeared on the Dick Cavett TV show. Elegantly dressed in a burgundy velvet sport coat and sparkly vest, this titan of the surrealist movement strode on stage with a gold handled cane in his right hand — and on his left, a live anteater on a leash, which he promptly dumped in the lap of another guest, the actress Lillian Gish. When Gish asked him if his work had a message for people, he shot back “No message.” “Could you invent one?” pleaded Cavett.

Back in 1937, Dalí was much less famous when he showed up at MGM studios with his buddy Harpo Marx to pitch a movie treatment. The Marx Brothers, on the other hand, were at the height of their popularity, thanks to their hijinks in films like Duck Soup, A Night at the Opera and Animal Crackers.

But studio head Louis B. Mayer didn’t particularly like the Marx Brothers or know what to make of Salvador Dalí, and so he killed the project the artist had titled Giraffes on Horseback Salad. Now, writer Josh Frank has turned that somewhat incomprehensible screenplay into a graphic novel. “It was crazy surreal,” he says, “and totally not digestible, and Groucho said quote-unquote ‘it wouldn’t play.'” 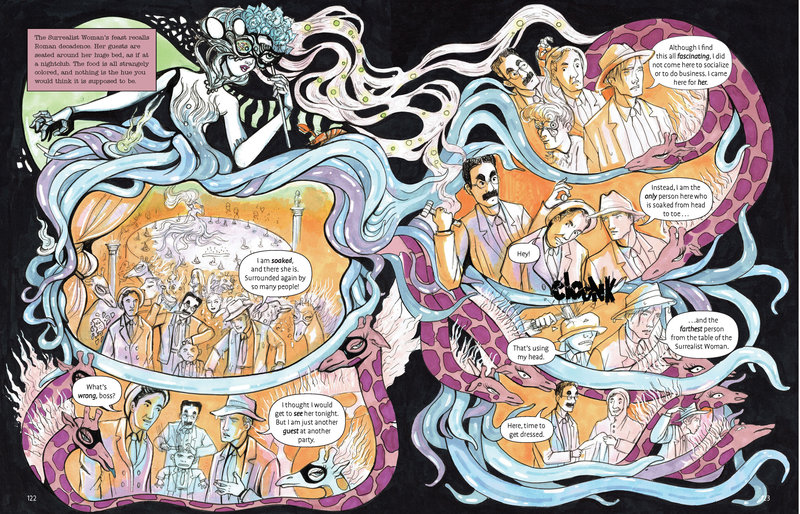 The adventures of the Surrealist Woman. CREDIT: Quirk Books

And so that screenplay slipped into the realm of legendary lost treasures — that is, until Frank got wind of it, tracked it down at a museum in France, and recruited a team to help him put it together. The team included Spanish illustrator Manuela Pertega and comedian Tim Heidecker, who helped come up with gags because Dalí’s production notes just said, “insert Marx Brothers routine here.” Frank says the collaboration worked. “Next thing you know, I’m creating a new piece of Marx Brothers art for the world, and it’s a dream come true.”

But we’ve put the cart before the giraffe here. Let’s back up. First, what’s with that name? Frank hasn’t a clue. “Asking me what Giraffes on Horseback Salad means is asking me, ‘lobsterphone,’ you know?” he laughs. “However, what I’ve always thought, ever since I first heard that name, is that to me it’s the perfect name for a Marx Brothers movie written by Salvador Dalí. Because it has that — A Night at the Opera, A Day at the Races, Giraffes on Horseback Salad. It works somehow.”

Next, the plot — such as it is. A businessman named Jimmy finds his well ordered upper-crust life turned inside out when he meets the Surrealist Woman. She’s a stunning shape-shifter who discombobulates the world around her. Eventually she’s arrested for her surrealist crimes and winds up in court where the mayhem of the Marx Brothers ultimately liberates her. These moments are depicted in the book as the trippiest of swirling LSD experiences.

And finally, just how did Salvador Dalí end up teaming up with the Marx Brothers in the first place? “When he first saw a Marx Brothers movie, it put him in a trance, because he felt he was watching the human embodiment of surrealism in its purest form,” Frank says. “All of the Marx Brothers, but specifically Harpo, because Harpo was unbridled, almost animalistic, so he loved Harpo.” 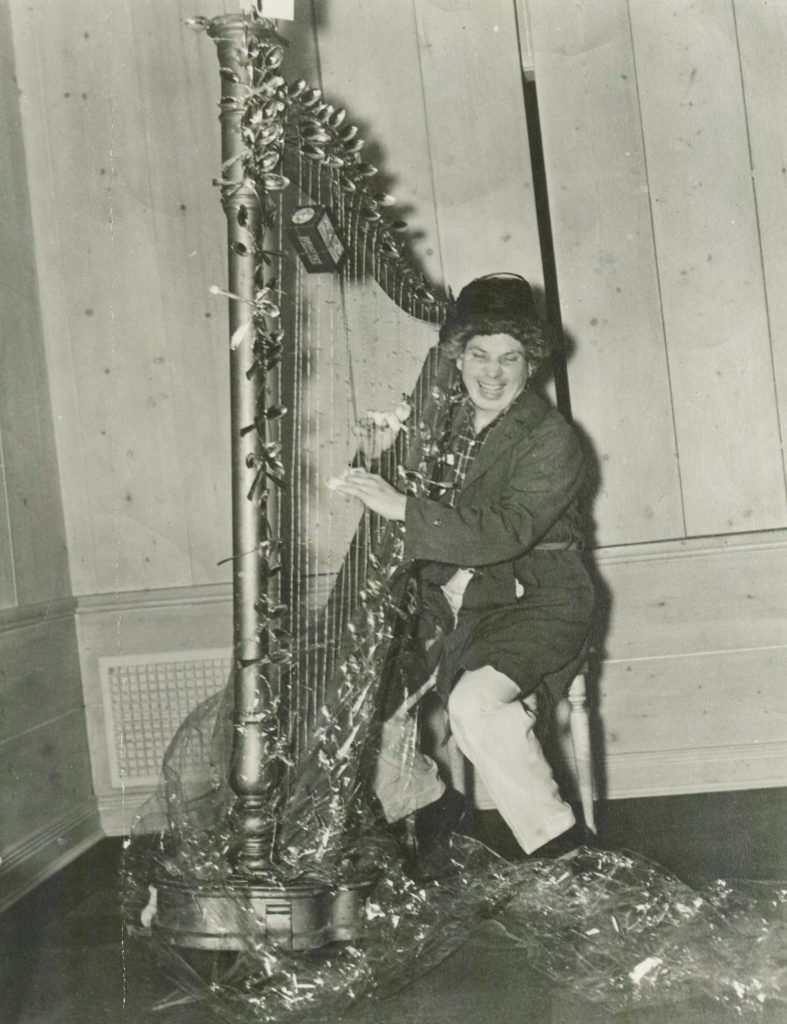 Harpo Marx with the surrealist harp sent to him by Salvador Dalí. Courtesy of Marx Family

Harpo, who never spoke on screen, was probably the zaniest member of the family, known for playing the harp and pulling items from under his trench coat — like 300 knives or a hot cup of coffee or a blowtorch — and of course, honking his horn. He was in Paris in 1936 on a publicity tour for A Night at the Opera when he met Dalí. Even though they didn’t have a language in common, the pair clicked, and Dalí decided to incorporate the Marx Brothers into the movie treatment he was working on.

Harpo’s son Bill Marx remembers being maybe 7 or 8 when he came across a Xerox copy of Giraffes. “And I started reading it, and I really couldn’t make heads or tails of it,” he says. Bill, a musician and composer, was too young to remember when Dalí came to the States to paint his dad and pitch his film. But there were telltale signs of the friendship — like the Dalí pen and ink sketches hanging in his bedroom growing up. There were also stories about the full-sized surrealist harp Dalí had sent to Harpo. It came wrapped in cellophane, with the harp frame dripping forks and spoons and barbed wire replacing the strings. But Bill Marx says they didn’t have the instrument very long. “My mother, who was very practical, she said I’m sorry, I can’t look at this anymore, and she threw it in the garbage.” Just imagine if there was some lucky dumpster diver that day.

Harpo was also an accomplished painter, producing some 300 works, and Dalí sat for him during his California trip. Bill Marx say his dad’s time with the artist may have been brief, but it’s effect on both of men was long lasting. Author Josh Frank agrees. “So this whole meeting of these two strange and wonderful minds, I really felt even though it was a short amount of time they were together that they profoundly affected each other because Harpo went on to continue painting and take it even more seriously.”

And, says Frank, Dalí was also left inspired — but ultimately unfulfilled too. “This short time he had with Harpo was, I feel like, a really great lost moment that created a work of art that until now has not really been able to be seen.”

Dalí envisioned a huge Hollywood production for Giraffes on Horseback Salad, complete with music by Cole Porter. While the project never did get the green light, there is a now a soundtrack to go along with the graphic novel — including music, complete with a faux Groucho. And so just maybe, up in some dreamy surrealist heaven, the real Groucho — along with Harpo, Chico and Salvador Dalí — is smiling down.