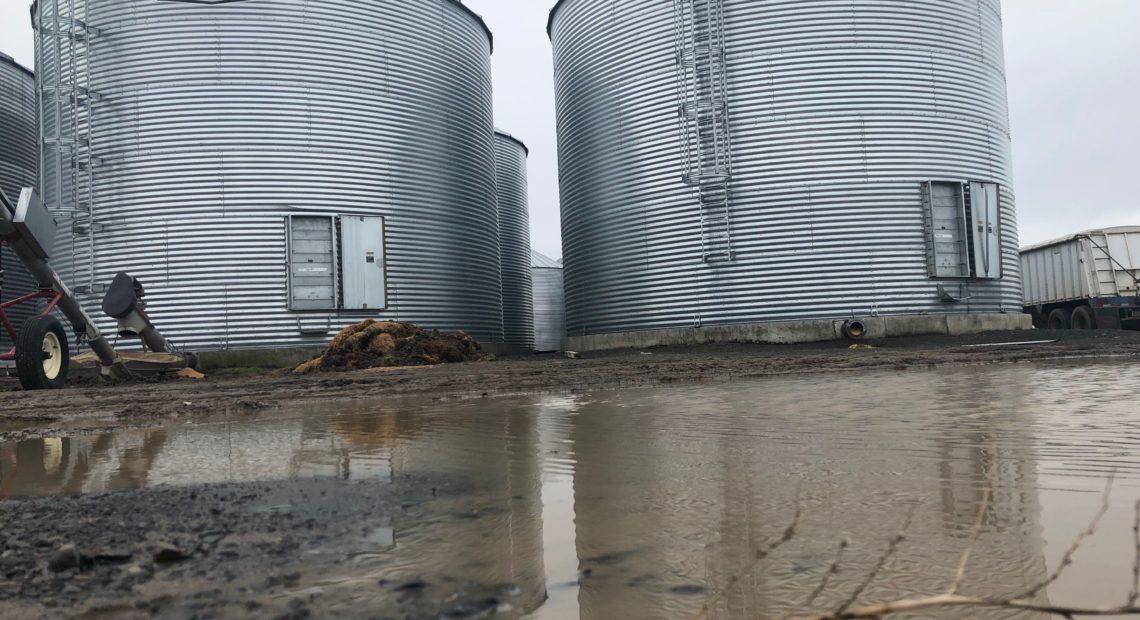 Gary Middleton is worried about his cherry and blueberry buds outside of Eltopia, Washington.

They’re developing late. And it’s gnawing at him.

“Obviously it’s going to move the harvest dates back,” Middleton says. “I would anticipate we’re 7 to 10 days behind a normal harvest.”

A week or so might not seem like a big deal to a non-farmer, but that short window can mean the difference between higher prices for Middleton’s crop, or a potential loss on his harvest.

Several major crops in Oregon and Washington are significantly delayed from foul winter weather and a cool spring.

Wheat farmers are having trouble planting in the wet ground. Potatoes are still being planted a month late. And fruit tree buds are developing slowly. 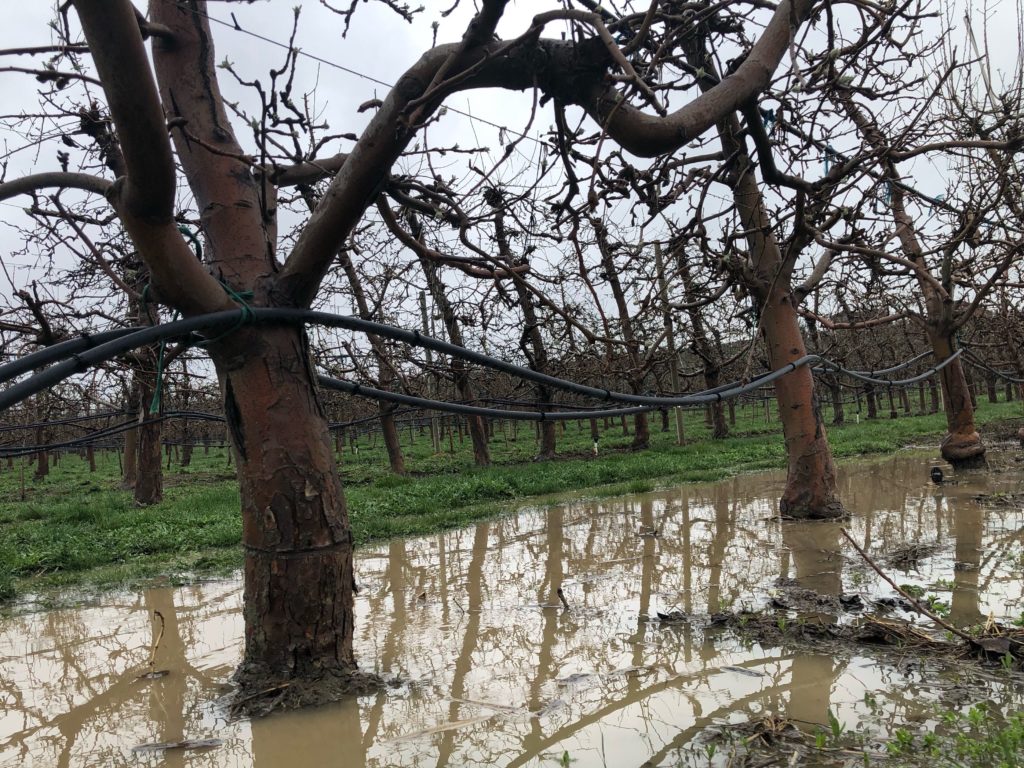 Some of Middleton’s cherry trees even sit in large puddles of water, and just getting work done on the farm has been a challenge with heavy February snow, and many rainy and windy days delaying fertilizer and pesticide applications.

“And we try to get on as much spray on as we can before the wind becomes an issue and that’s what we do every day,” Middleton says.

Middleton says his crews are working around the tough conditions to try and catch up. Heat will be on them soon.

He says if his harvest is even just a week late, he could miss the premium prices. He’s trying to hit the profitable and big fruit-eating holiday: Independence Day.

He’s hoping spring heats up gradually, “with no wind,” he says laughing.

It’s a similar story in Northwest wheat country, where farmers are running as much as five weeks late planting their spring wheat crops. 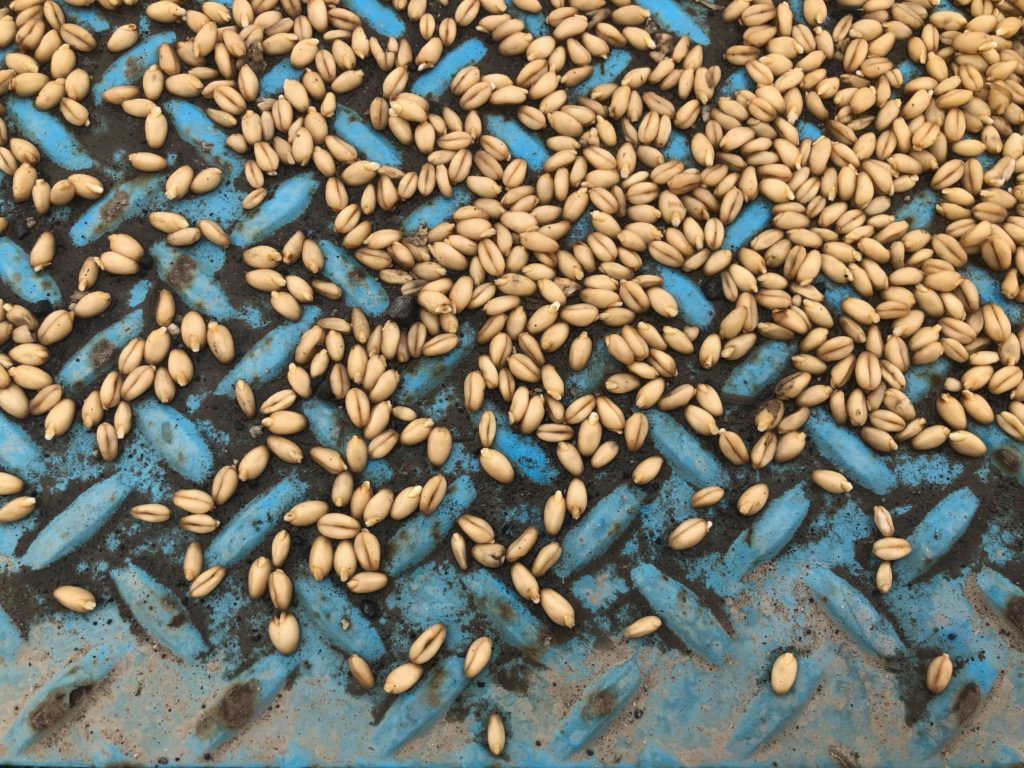 Spilt seed makes patterns on the metal truck scale. Many wheat-country farmers have been changing their seed orders after unusual weather patterns in the Northwest pushed back planting.
CREDIT ANNA KING/N3

Winter wheat too — planted in the fall — is late in waking up and growing. That means those crops might reach critical points of their development right when the scorching heat hits. That could end in a light crop, lower grain quality or shriveled kernels.

In Connell, Wash., Dana Herron sells a lot of seed. Huge silver silos sit just outside his office. His muddy boots shift back and forth under his standing desk.

“Typically, in the Pacific Northwest we’ll start planting potatoes on the last week of February, and wheat shortly thereafter,” Herron says. “This year we were four to five weeks late getting our crops planted. Spring crops like spring wheat, garbanzos and pulse crops are not going to get planted on time. That means they’ll be subject to late season heat and stress.”

Herron says farmers have been coming to him and switching their seed orders to match these unusual conditions. He says this spring, many farmers are spending more time in his office than usual — trying to make those tough decisions.

“Most of these guys already know what they want to do,” Herron says. “When they come into my office all they really want is just confirmation: ‘Am I thinking about this correctly?’ And so this year there’s been quite a bit of stress.” 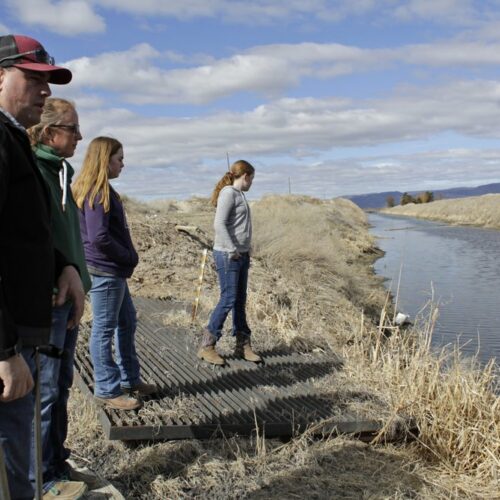 Hundreds of farmers who rely on a massive irrigation project that spans the Oregon-California border learned Wednesday they will get a tiny fraction of the water they need amid the worst drought in decades, as federal regulators attempt to balance the needs of agriculture against federally threatened and endangered fish species that are central to the heritage of several tribes. Continue Reading Epic Drought Means Water Crisis For Parts Of The West Coast, Though Much Of Northwest Is OK