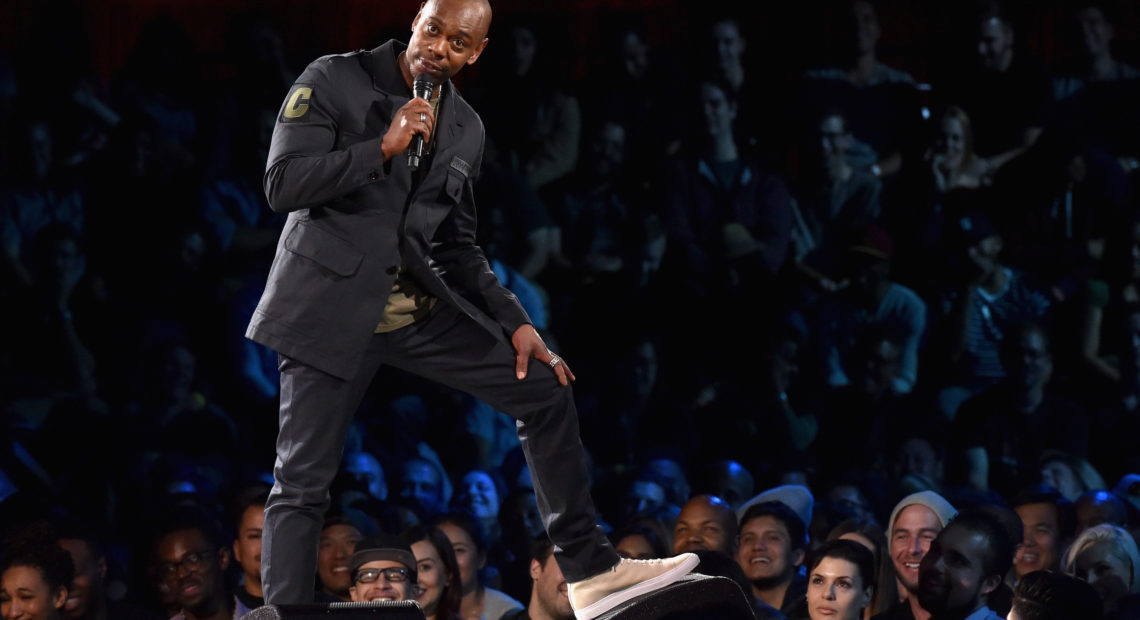 PHOTO: In recent years, Dave Chappelle returned to stand-up comedy in force with a series of specials, released on Netflix. He will receive the Mark Twain Prize on Oct. 27, 2019. CREDIT: Lester Cohen/Netflix

Comedian Dave Chappelle will be awarded the Mark Twain Prize for American Humor this year, the John F. Kennedy Center for the Performing Arts has announced.

The stand-up comic, actor, producer and director joins a prestigious group of comedians to receive the award. Among them are Carol Burnett, Whoopi Goldberg, Bob Newhart and Richard Pryor — who won the very first Twain Prize in 1998.

“Dave is one of the truly original voices in comedy — the definition of a creative artist,” Matthew Winer, director of comedy and special programming at the Kennedy Center, said to NPR. “He’s a modern day sociologist, skewering stereotypes, defying boundaries and showing us that laughter can be a way to contextualize issues that we struggle to understand.”

“Dave is the embodiment of Mark Twain’s observation that ‘against the assault of humor, nothing can stand,’ ” Deborah F. Rutter, president of the Kennedy Center, said in a prepared statement. “For three decades, Dave has challenged us to see hot-button issues from his entirely original yet relatable perspective.”

Edgy, politically incorrect and occasionally scatological, Chappelle’s career skyrocketed with three seasons of Chappelle’s Show (2003-2006), one of the most popular comedy shows on TV. Co-created with Neal Brennan, the sketches on Comedy Central spared no one.

It was “revolutionary,” must-see TV, wrote Rembert Browne, who was a teenager when Chappelle’s Show aired: “It was unacceptable to show up to high school the next day without knowing all the material from the previous night’s episode.”

Chappelle’s Show earned three Emmy nominations and became a bestseller on DVD. But after signing a reported $50 million deal for Seasons 3 and 4, Chappelle famously and abruptly disappeared from entertainment altogether. He spent two weeks in South Africa and then moved to Yellow Springs, Ohio, with his family.

“I felt in a lot of instances I was deliberately being put through stress because when you’re a guy who generates money, people have a vested interest in controlling you,” he told Oprah Winfrey.

His latest specials address hot-button issues such as race, class, gender, President Trump and the #MeToo movement. Chappelle compared the current women’s movement to African Americans’ long struggle for equal rights, and even suggests South Africa’s Truth and Reconciliation Commission as a model for inspiration.

Not all of the jokes in his recent specials have landed well with all audiences. Critics have repeatedly objected to his jokes about people who are transgender and the #MeToo movement.

Setting aside his fondness for dirty and transgressive material, Chappelle is socially conscious to his core. His father was a professor at Antioch College. His mother taught at Howard University. For high school, Chappelle attended the Duke Ellington School of the Arts in Washington.

“Dave is a hometown hero here in Washington, D.C., where he grew up,” Rutter also said. “We’re so looking forward to welcoming him back home [at the Kennedy Center].”

His appearance on Saturday Night Live, days after Donald Trump won the 2016 presidential election, also received an Emmy. His opening monologue took jabs at the president-elect, and skewered black and white stereotypes, before turning more serious at the end, as he reflected on a BET party he’d attended at the White House during the Obama administration.

“So, in that spirit, I’m wishing Donald Trump luck,” Chappelle said. “And I’m going to give him a chance, and we, the historically disenfranchised, demand that he give us one too.” He has, however, since apologized for that remark.