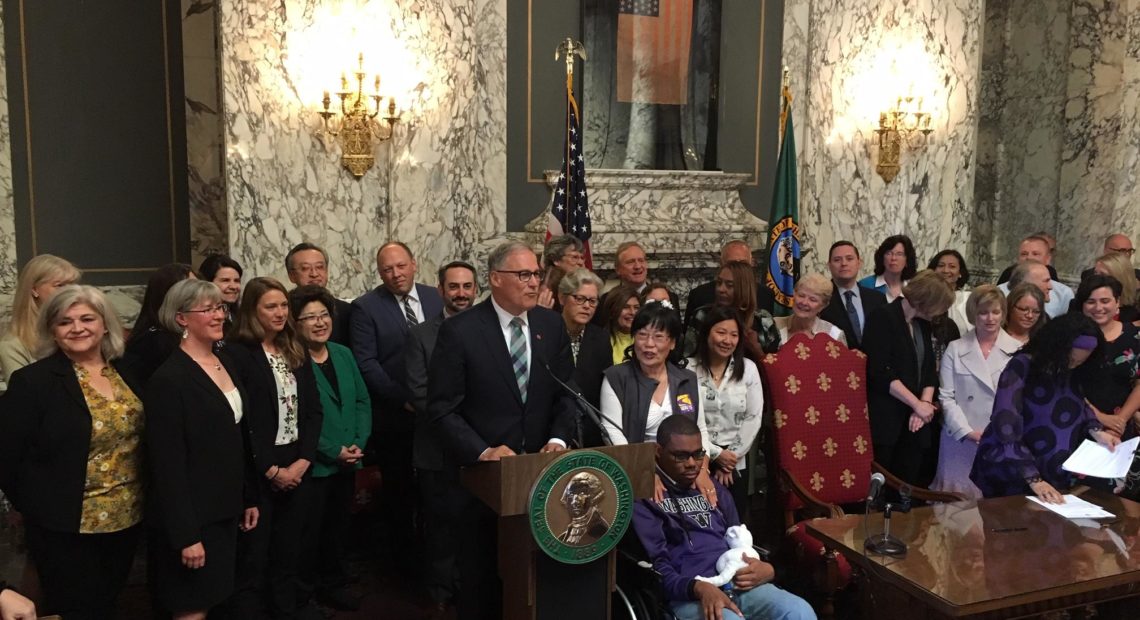 Washington is poised to become the first state in the nation to offer a public health insurance option, as well as a new, employee-paid long-term care benefit.

Gov. Jay Inslee, a Democrat who is running for president, signed both landmark measures into law Monday at a packed bill signing ceremony in the State Reception Room at the Capitol in Olympia.

“These two bills are models for the rest of the nation to consider,” Inslee said, according to prepared remarks provided by his office. “Washington state, once again, is at the head of the pack when it comes to policies that help working families and provide much-needed security when it comes to their health care.”

Under Washington’s new law, known as Cascade Care, the state will contract with private health insurance carriers to offer three levels of plans – bronze, silver and gold – beginning in November 2020. To keep premium and deductible costs down, the plans will cap total provider and facility reimbursement rates at 160% of Medicare.

The plans will be available on the state’s Health Benefit Exchange, the online insurance marketplace where individuals can sign up for Medicaid, if qualified, or purchase individual health insurance coverage. The exchange was created in 2011 to implement the federal Affordable Care Act in Washington.

Approximately 200,000 Washington residents, or less than 3% of the population, buy individual coverage on Washington’s Exchange. Between 2018 and 2019, enrollment in the individual market dropped by more than 13,000 people, according to data provided by the Exchange. The state’s most recent uninsured rate was estimated at 5.5%.

Participation by health insurers in Cascade Care will be voluntary. There’s also no guarantee that public option plans will be offered in all 39 Washington counties, though that’s the goal of the legislation. Health insurers can choose to bid to offer plans under Cascade Care in one or more counties, however there’s no requirement in the law that a health insurer offer statewide coverage.

The creation of the Cascade Care program, at the request of Inslee, follows years of volatility and double-digit premium increases in Washington’s individual health insurance market. This year, the state’s insurance commissioner approved an average premium increase of 13.5%. In 2017, the average rate increase was 36%.

Washington state officials said the individual insurance market has been buffeted by a series of Trump administration policies, including the end of federal reinsurance and cost sharing payments and the end of penalties for individuals who don’t buy coverage.

Currently, 14 of Washington’s counties only offer one individual health insurance plan option. In previous years, the state has scrambled to find even a single carrier to provide coverage in some rural counties and avoid what are known as “bare counties.”

Majority Democrats in the Washington Legislature embraced the public option as a way to increase offerings on the Exchange without reducing coverage mandates.

“This is going to lower premiums, it’s going to have better cost-sharing and Washingtonians will be much better off for it,” said the bill’s prime sponsor, Democratic state Sen. David Frockt of Seattle, on the floor of the state Senate last month.

Frockt said Monday he hoped the public option would be up to 10% cheaper than traditional plans on the Exchange.

But minority Republicans in the state Legislature opposed Cascade Care and warned of potential unintended consequences.

“We worry that this could distort the market,” said state Sen. Steve O’Ban, the ranking Republican on the Senate’s Health and Long Term Care Committee.

O’Ban said he was concerned individuals would jump from the small business insurance marketplace for Cascade Care. He also speculated that doctors might drop Medicaid patients “to make it work financially to participate in this plan with the lower reimbursement rates.”

In a statement Monday, Regence BlueShield of Washington said it is “still evaluating” the public option “to determine how Regence could be involved.”

Under Cascade Care, the state will not subsidize or help cover the cost of premiums beyond federal subsidies that are already available on the Exchange based on income levels. However, the new law requires the Exchange to study the feasibility of offering state-level subsidies in the future.

“We think initially the consumers that will be most interested in purchasing in these plans will be those who don’t qualify for subsidies and who are paying the full cost of healthcare out of their pocket,” MacEwan said.

Also this year, Washington Democrats passed legislation codifying in state law many of the Affordable Care Act protections. They also included in the new state budget a provision to create a work group on establishing a universal health care system in Washington.

Previously, Washington lawmakers considered creating a reinsurance program, similar to Alaska, to bring stability to the individual insurance marketplace. That proposal did not pass.