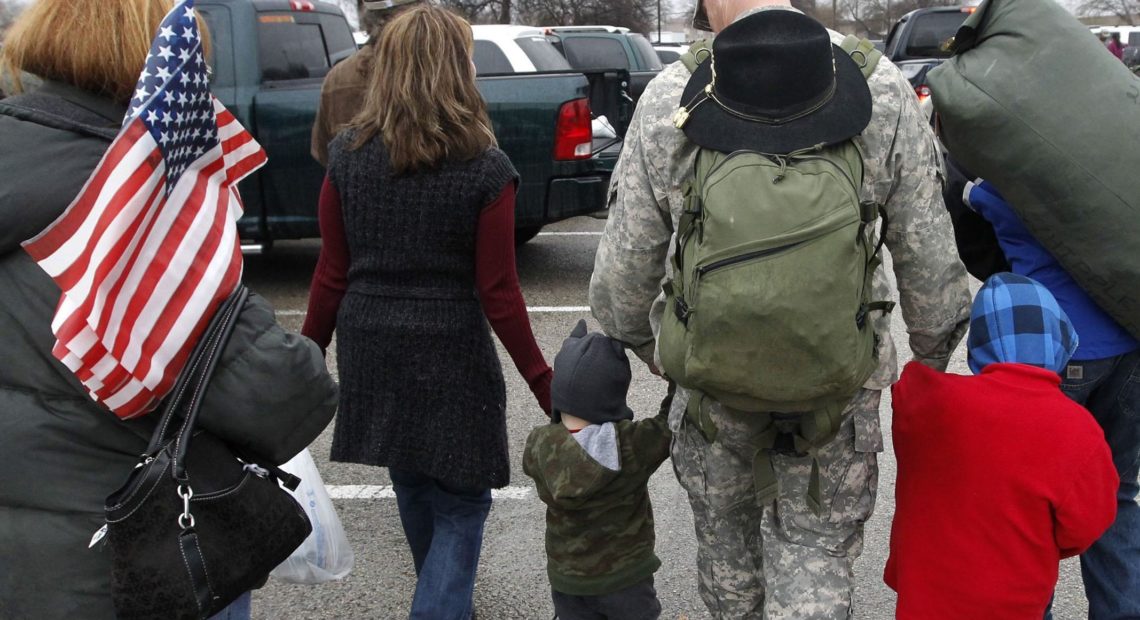 A U.S. Army Tweet Asking ‘How Has Serving Impacted You?’ Got An Agonizing Response

PHOTO: A soldier walks with his family following a 2011 ceremony at Fort Hood, Texas, for soldiers from the U.S. Army 1st Cavalry 3rd Brigade, who returned home from deployment in Iraq. CREDIT: Erich Schlegel/AP

The U.S. Army issued a tweet ahead of Memorial Day weekend with a question for service members and veterans: “How has serving impacted you?”

Among the thousands of responses: harrowing tales of trauma, depression and sexual assault.

In a thread, an Army tweet that preceded the question featured a video by Pfc. Nathan Spencer, a scout with the Army’s First Infantry Division.

In the video, Spencer says, “To serve something greater than myself. The Army’s afforded me the opportunity to do just that, to give to others, to protect the ones I love, and to better myself as a man and a warrior.”

Soon after the U.S. Army tweeted its question, thousands of responses began flooding in. Many people tweeted about the positive impact military service had on their lives, but others posted stories of post-traumatic stress disorder, illness and suicide brought on by experiences ranging from seeing loss of life to sexual assaults in the military.

How has serving impacted you?

One man responded, “How did serving impact me? Ask my family.” He wrote of a “Combat Cocktail” which included “PTSD, severe depression, anxiety. Isolation. Suicide attempts. Never ending rage.”

Another person wrote, “After 15 years in I was kicked out after showing obviously signs of PTSD and depression. Now I can’t function in society because of my major depressive disorder. So now what?”

Responses to the U.S. Army’s Twitter post now number more than 11,000. The frequent references to PTSD don’t come as a surprise to Marsha Four, national vice president of Vietnam Veterans of America.

“When you’re in war, that’s what happens,” she said Monday in Washington, sitting near the Vietnam War Memorial. “I was a nurse. I dealt with death and dying every day. I dealt with people’s fear and their rage and their loneliness.”

Different wars may be fought for different reasons, and with different weapons, but some things remain the same, she said. “And that is: death, fear and — one thing I never forget is the smell of blood. It’s a very, very old and dark smell, and it’s something you never forget.”

In addition to PTSD, another common theme on Twitter was the reports of sexual assault while serving in the military. One woman wrote of suffering from depression and anxiety, and said she “still can’t deal well with loud noises. I was assaulted by one of my superiors. When I reported him, with witnesses to corroborate my story, nothing happened to him. Nothing. A year later, he stole a laptop and was then demoted. I’m worth less than a laptop.”

Another response: “My wife and I served in the @USArmy. We spent over 5 years geographically separated from each other. She was sexually assaulted on deployment and kicked out of the army for seeking treatment bc she was then deemed unfit for service. I got out bc her assaulters went unpunished.”

Others wrote of loved ones, friends and relatives who had taken their own lives during or after their service in the military.

One Twitter user wrote, “Some say this thread back-fired but this is just the thread that is needed each memorial day so we remember the sacrifices military members and their families make and how we as a country need to understand the true cost of service and improve our support.”

Four, the former Army nurse who now works with the Vietnam Veterans of America, said serving in the Army changed her life completely, because after the war she found a home in the community of veterans. Without her time in the Army, “I would never have been able to be in the position I’m in, knowing that this is where I could find my purpose — to be part of something bigger than I am, to know that I’ve contributed, that my life has been worthy.”

The U.S. Army responded to the outpouring on May 25, tweeting: “To everyone who responded to this thread, thank you for sharing your story. Your stories are real, they matter, and they may help others in similar situations. The Army is committed to the health, safety, and well-being of our Soldiers.”

In a separate tweet, it said: “As we honor those who paid the ultimate sacrifice this weekend by remembering their service, we are also mindful of the fact that we have to take care of those who came back home with scars we can’t see.”

On the same day, the Army also posted a tweet with a link and phone number for the Veterans Crisis Line.

According to the Department of Veterans Affairs, there are approximately 20 million veterans in the U.S., and fewer than half receive VA benefits or services. The department says suicide rates among veterans are rising, and in 2016, the suicide rate was 1.5 times greater than for nonveteran adults. A VA report last year found more 6,000 veterans have died by suicide each year from 2008 to 2016.

Veterans in need of help can access the Veterans Crisis Line by calling 800-273-8255 or through this website: https://www.veteranscrisisline.net