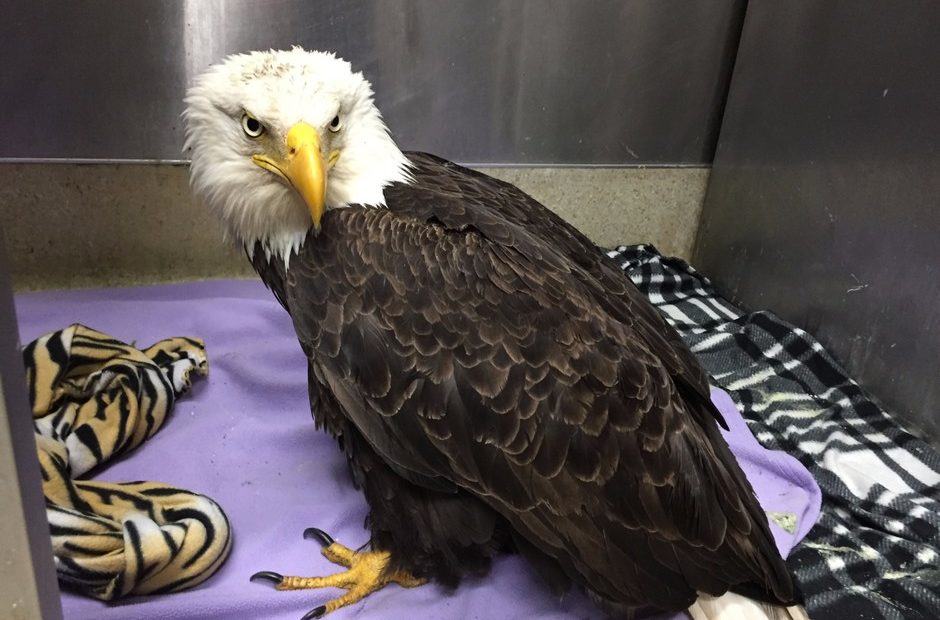 To Drive Eagles Away From Deadly Wind Turbines, Researchers Turn To Sound

Two similar projects, funded through the U.S. Department of Energy, are developing systems that could one day be used to help birds avoid wind farms. One of those projects has brought researchers to the Pacific Northwest to work with rehabilitating raptors.

At the University of Minnesota, researcher JoAnn McGee had already been studying acoustic research with exotic animals such as tigers and lions. And so, when a colleague came to her looking to lower bird deaths at wind farms, she thought maybe an acoustic deterrent could be developed.

“What we would hope for is that the birds would listen to the sound source and then would alter their flight patterns if they were heading toward the wind turbines,” McGee said. 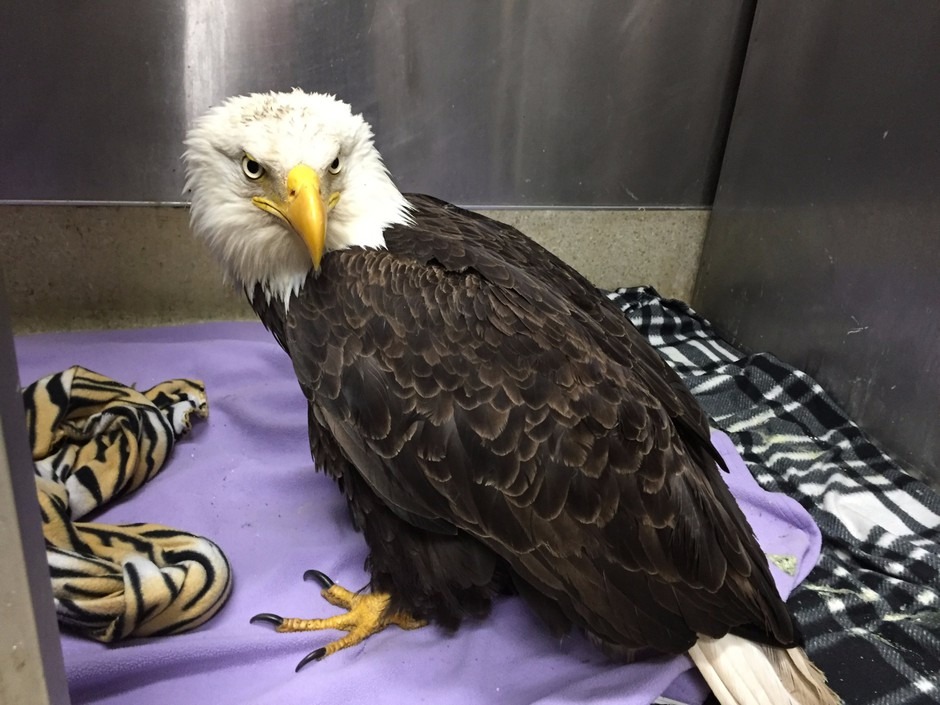 The idea would be that sensors would detect when birds are flying toward wind facilities. Computer programs would determine what bird was heading near and would play a sound to drive the bird away.

First, she had to figure out what eagles can actually hear. To do that, they studied bald and golden eagle brain activity when researchers played certain sounds. They tested wild and captive birds.

“We were able to assess the frequency range that eagles hear over and what their thresholds are to sound,” McGee said.

The birds responded best to 2-kilohertz sounds, which is within the human speech range. That means sounds would have to be something people can also hear, so they’re trying to make the sounds that could eventually be played near wind turbines simple and not annoying to people.

The researchers analyzed eagle calls to see what the birds would most respond to. They used an eagle vocalization they dubbed “the scream,” a “squeal,” and an eaglet grunt. The team also used sounds of crows mobbing other birds and a variety of complex synthesized tones.

They then placed an eagle in a small room, not large enough for it to fly in. They watched through cameras for the bird to become still. Then they’d randomly play sounds and wait five seconds for the bird to respond.

“The most common response of the eagle was to turn his head toward one speaker or the other,” McGee said. “There were other response, they would sometimes ruffle their feathers or they would look up or down. There was even sometimes a minor startle response, like if you’re not expecting a sound.”

Usually, the birds responded better to the natural sounds. The eagles also didn’t become too used to most of the sounds.

“That gives us a really good starting point toward [creating] a deterrence tool,” McGee said.

With that information, McGee is going to try to create synthetic sounds that better mimic the natural ones.

“We don’t really know what the natural stimuli mean to them, so we don’t want to confuse them [in the wild],” McGee said.

Once they figure out which synthetic sounds work best, they plan to test the eagles during flight. Then, they’ll take the sounds to the National Renewable Energy Laboratory’s test facility.

“We’re hoping [for more] green energy, but also we want to protect eagles and other birds from the hazards associated with it,” McGee said. 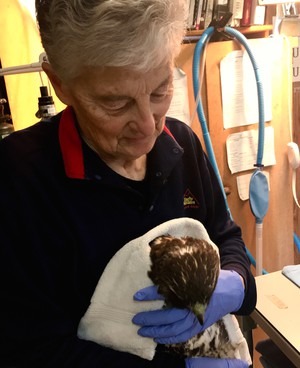 Researchers at Purdue University are working on a similar project, looking at eagles’ behavior in response to audio and visual cues. Jeffery Lucas, who studies animal communication at Purdue, said these types of studies are important, as we increasingly rely on renewable energy.

“With global warming, we’re looking to non-fossil fuel sources of energy. Well, then you put all of these wind turbines up, and all of the sudden you have this massive impact on wildlife. Anything that you do that generates an unnatural environment can have an effect on wildlife,” Lucas said.

To do that, he and several other researchers are studying eagles’ hearing, vision and behavior. The team was able to combine Department of Energy grant funding with funding from the renewable energy company Avangrid, Lucas said.

“We’re trying to study what the audio world and the visual world of bald and golden eagles is like, so that we can be a little bit more clever about trying to optimize a stimulus that is detected by the birds,” Lucas said.

They’ve found birds hear some sounds pretty well, but sounds like tones can be masked by other sounds, like from a wind farm. He said sounds that change frequency aren’t as masked by competing sounds. Lucas said he’s found bald and golden eagle hearing is quite different.

Visually, he said, it’s been hard to determine what wavelengths of light the birds are sensitive to. They did look at what eagles can see, based on the shape and placement of their eyes.

Turns out, birds have a blind spot above their head – it’s more prevalent with golden eagles, Lucas said. If an eagle is looking down, it can’t see objects in front of it, like a rotating turbine blade.

“You can guess about what kinds of sounds and what kinds of lights are relevant [to keep birds away from wind farms], but there’s much less guessing going on if you know how an eagle perceives the world,” Lucas said.

A team of the Purdue researchers tested visual and audio signals at several wildlife rehabilitation clinics, including Blue Mountain Wildlife in Pendleton, Oregon.

Lynn Tompkins, director of the rehabilitation center, said she’s hopeful the technology will work, but she’s still a little skeptical, mainly because golden eagles don’t have a lot of things to fear in the wild. She said she’s not sure what would drive them away from wind farms.

Tompkins has treated lots of injured birds from energy facilities. The ends of turbine blades are rotating around 200 miles per hour hitting a bird that’s about 8 pounds, she said.

Lucas said they plan to continue testing birds’ behavior to different lights and sounds, now that they better understand the birds’ physiology. He expects a combination of light and sound will be more effective to keep birds away from turbines.

He said eventually these types of systems could be used to keep birds away from other big things they run into, like planes and buildings. 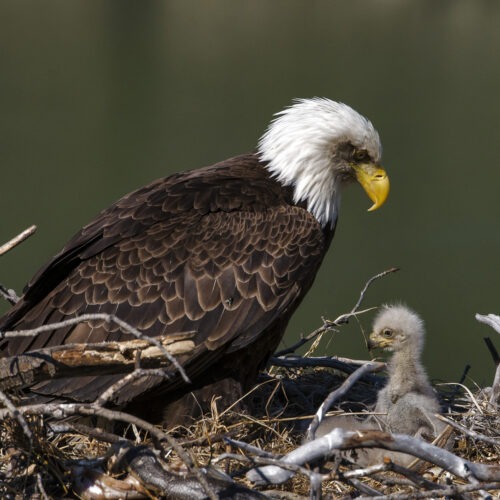 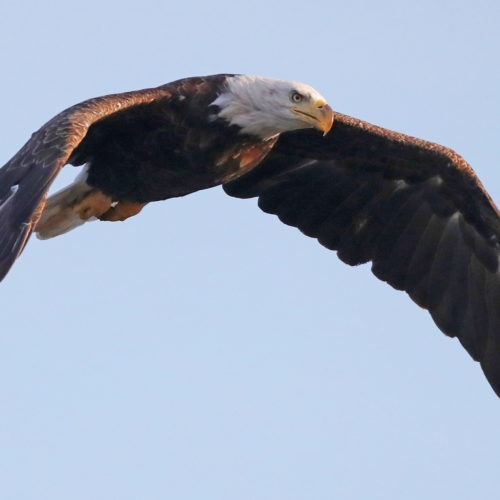 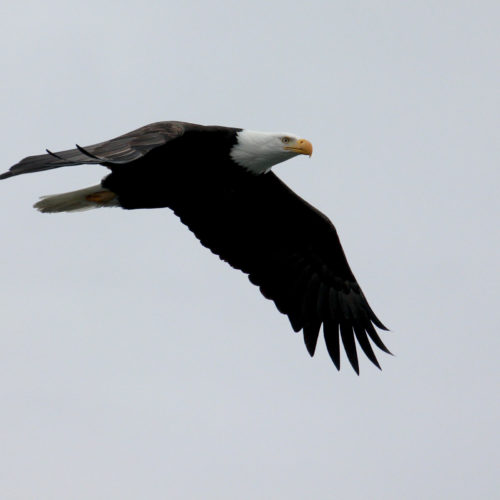 A proposed energy storage project in the Columbia Basin is drawing concern from bird advocates. They’re worried new water ponds could attract waterfowl and eagles that could then be struck by nearby wind turbines. Continue Reading Wildlife Advocates Worry A South-Central Washington Energy Project Will Hurt Birds