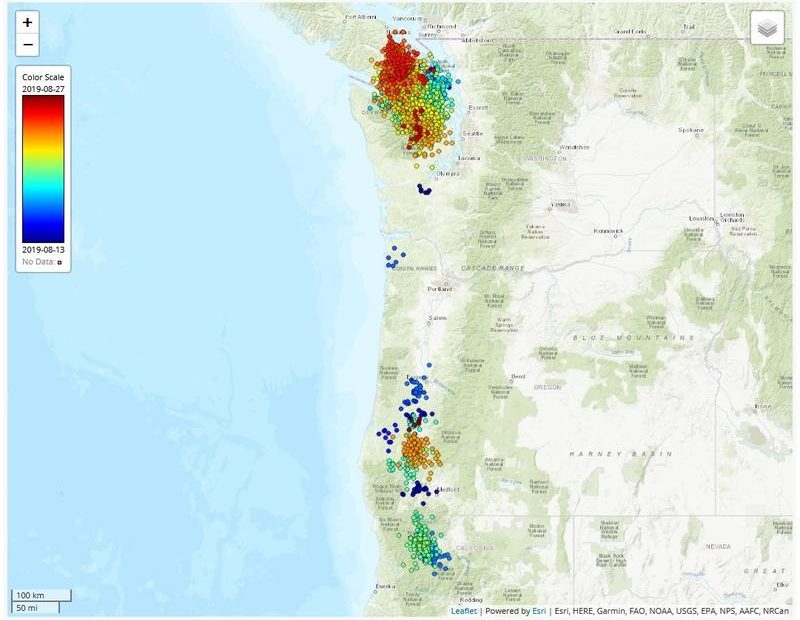 Thousands Of Unfelt Tremors In Northwest Quake Zone Mean Something — But What?

Did you feel the ground move today, or yesterday or over the weekend? Not likely, even though a wave of small tremors was spreading under people’s feet in the coastal Pacific Northwest.

The Pacific Northwest Seismic Network has detected more than 4,500 tremors over the past two weeks deep beneath the Olympic Peninsula and southern Vancouver Island and from another swarm stretching from Eugene to the Siskiyou Mountains.

It’s a phenomenon called “episodic tremor and slip” or “slow-slip.” Humans can’t feel it, but seismologists have discovered this happens along Cascadia’s tectonic plate boundary on a regular basis — every 14 months or so in the case of Puget Sound and on a different cycle in Oregon and northern California.

The key question for seismic network director Harold Tobin at the University of Washington is whether the current slow slip has implications for the feared Big One, a large Cascadia earthquake.

“There could be a heightened chance that that would be adding stress to the part of the plate we actually worry about, which is the ‘locked zone’ or the seismogenic zone, for the big earthquake,” Tobin told public radio on Tuesday. “But the fact is the jury is very much out on that.  That is a hypothesis, but we don’t know.”

“We have never observed an episodic tremor and slip event triggering a major earthquake in our region and really we’ve only seen possible shaky evidence toward that in other parts of the world,” Tobin continued. “It’s an area of active interest, but it’s not necessarily something we know is changing the stress on our fault at all.”

Tobin cast doubt on an alternative hypothesis that posits that the release of energy through slow-slip events could lower the severity of future large earthquakes.

Tobin said the rumbling and slippage detected this month is happening pretty deep on the Cascadia Subduction Zone fault plane, below the plate interface thought to be “locked.” The slow-slip area is 25 to 40 kilometers deep where the earth’s rocks are hotter and more pliable.

Tobin’s bottom line is that there is no scientific basis for alarm about the Big One happening now as opposed to later.

University of Washington and Central Washington University researchers report episodic tremor and slip events typically last three to four weeks and cumulatively release as much energy as a magnitude 6.7-6.8 earthquake even though the tremors are not felt and cause no damage. The sliding along the fault amounts to a few centimeters over the period of weeks. This is why these episodes have sometimes been called “silent earthquakes.”

In a normal earthquake, a rupture travels along the fault in seconds — or minutes in a very big event — producing potentially damaging ground shaking and a rapid fault slip that can be measured in meters.

The most recent issue of the journal Science included two papers exploring the relationship of slow-slip tremors with large earthquakes. One of those studieslooked at slow slip processes before and after the devastating 2011 Tohoku earthquake and tsunami in northeast Japan. That magnitude 9 catastrophe caused more than 15,000 deaths.

The study, led by Tomoaki Nishikawa of Kyoto University, found the violent rupture of the Japan Trench during the 2011 megaquake might have been constrained by adjacent areas where slow-slip activity had occurred. Nishikawa wrote that the rupture began on the trench’s central segment and then terminated where it met neighboring segments at both ends where instrumentation had previously recorded large amounts of slow-slip activity.

The Japan Trench is frequently described as a near mirror image of the Cascadia fault zone along the Pacific Northwest coast. However, Japanese researchers have the benefit of much more extensive offshore monitoring stations compared to the northwestern U.S.

The last full rip of the Cascadia Subduction Zone happened in January 1700. The exact date and destructive power was determined from buried forests along the Pacific Northwest coast and an “orphan tsunami” that washed ashore in Japan. Geologists digging in coastal marshes and offshore canyon bottoms have also found evidence of earlier great earthquakes and tsunamis. The inferred timeline of those events gives a recurrence interval between Cascadia megaquakes of roughly every 300 to 600 years, according to the Pacific Northwest Seismic Network.

Slow-slip episodes have been known to the science community for barely 20 years. Before, the faint tremors could not be distinguished from background noise by the seismic instruments then available.

The PNSN’s ability to observe episodic tremor and slip benefited this spring from an upgrade to the signal processing software as well as additional seismic monitoring stations. Tobin said this means that hundreds of additional tremors are being recorded during the current slow-slip event that would have gone undetected before.