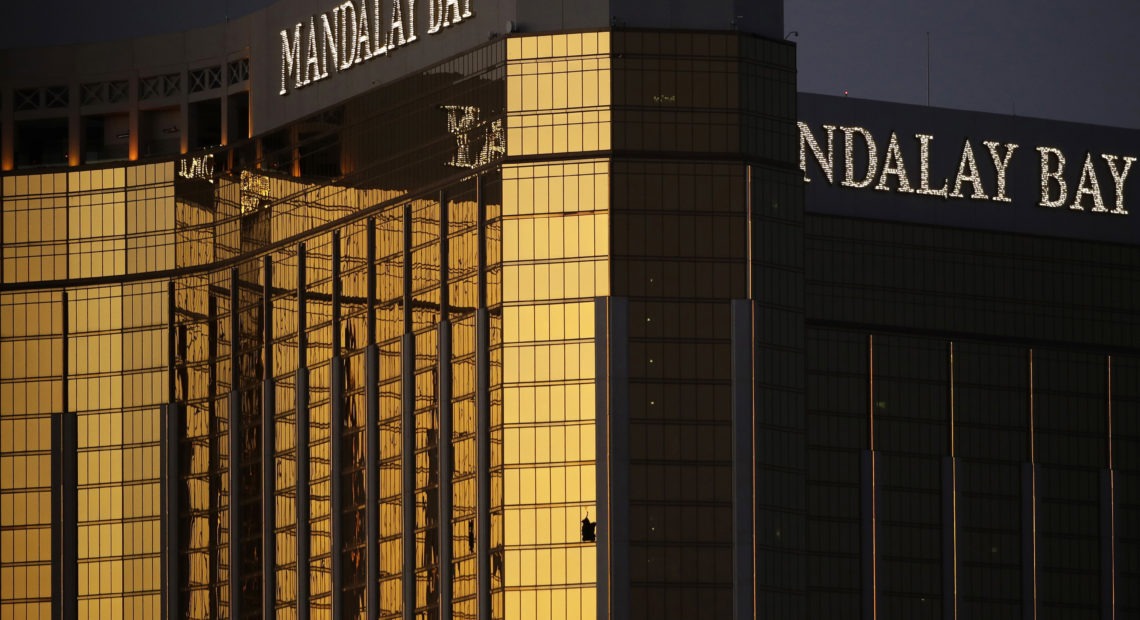 PHOTO: MGM Resorts International has agreed to pay up to $800 million to settle thousands of liability claims stemming from the 2017 mass shooting in Las Vegas. The shooter holed up in a room on the 32nd floor of the MGM-owned Mandalay Bay resort and casino. CREDIT: John Locher/AP

MGM Resorts International has agreed to pay up to $800 million to settle thousands of liability claims stemming from the 2017 mass shooting in Las Vegas, lawyers announced Thursday, almost exactly two years after the massacre.

On Oct. 1, 2017, a gunman on the 32nd floor of the MGM-owned Mandalay Bay resort opened fire on a crowd of people at a country music festival, killing 58 and injuring hundreds.

Lawyers representing survivors and victims wanted MGM held liable for negligence because the shooter was able to enter the hotel with luggage that held an arsenal of high-powered, assault-style weapons and thousands of rounds of ammunition.

“He brought in over 20 huge heavy bags over a three- or four-day period,” Catherine Lombardo, a lawyer representing some of the shooting victims, told NPR last year.

Robert Eglet, a lawyer who has been leading talks on behalf of shooting victims, said in a statement Thursday that MGM’s insurance will be paying out between $735 million and $800 million, depending on the number of claimants and that the agreement resolves “substantially all” of the lawsuits filed. Eglet said his firm represents nearly 2,500 people who said they were affected by the mass shooting.

An independent claims administrator will be appointed by a court to distribute money from a settlement fund. The payout process is expected to be completed by late 2020, lawyers said.

“While nothing will be able to bring back the lives lost or undo the horrors so many suffered on that day, this settlement will provide fair compensation for thousands of victims and their families,” Eglet said, adding, “We believe that the terms of this settlement represent the best outcome for our clients and will provide the greatest good for those impacted by these events.”

Lawyer Mo Aziz, who represents more than 1,000 people expected to file claims, said he hopes the payouts would provide closure and also prompt hotels across the country to bolster security measures.

“In this era of mass shootings, this settlement sends a strong message to the hospitality industry that all steps necessary to prevent mass shootings must be taken,” Aziz said.

Last year, MGM spurred outrage when it aggressively tried to avoid liability by countersuing victims. The company cited a federal law passed after the Sept. 11, 2001, attacks that encouraged companies to deploy anti-terrorism security technology without fear of being held responsible for damages in the event of a terrorist attack.

But now, MGM Resorts Chairman and CEO Jim Murren says that “prolonged litigation around these matters is in no one’s best interest. It is our sincere hope that this agreement means that scenario will be avoided.”

The deal is not an admission of any wrongdoing by MGM, Murren said in the statement.

The 64-year-old gunman, Stephen Paddock, was found dead in his hotel room from a self-inflicted gunshot wound. Federal investigators have not been able to identify a motive for the shooting.