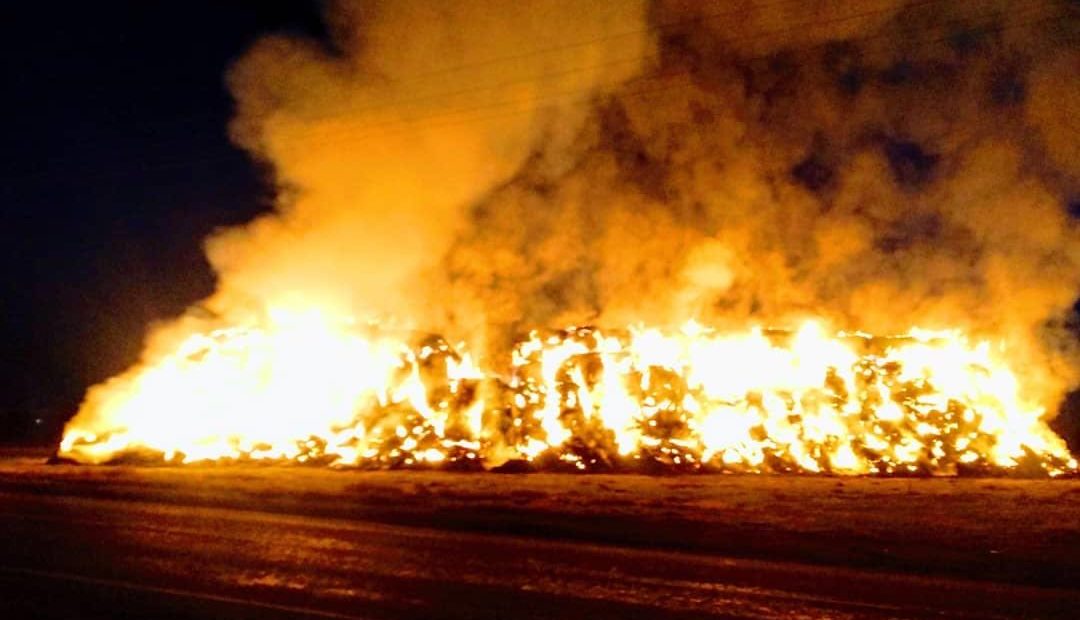 A blazing haystack puts out a ton of heat and light, and smells like a big cigar.

Early Saturday morning, Nov. 30, in Washington’s Tri-Cities region, a haystack was set alight north of Pasco in Franklin County. The fire was called in by an air traffic controller at the Tri-Cities airport in Pasco who could see it from miles away.

“I was across the road and it felt like a big warm campfire,” said Mike Harris with Franklin County Fire District 3. “It’s hotter than a house fire because it’s so dense.”

More than a dozen haystacks have been burned under suspicious circumstances in central Washington since early October. It’s concerning to the hay industry and law enforcement.

Most of the recent suspicious fires have been in Grant County, near Moses Lake and Ephrata.

Hay experts and law enforcement say they see a rash of haystack fires in the Northwest every so often. But sometimes there’s decades in between.

Andrew Eddie, is a hay grower near Moses Lake. He says hay is flammable, it lights for many reasons, including when hay is put up too wet and creates its own smoldering heat.

“Along roads you’ll get cigarettes out the window and stuff like that,” Eddie said. “Two years ago we got a lightning strike on a stack, that was pretty unusual.” 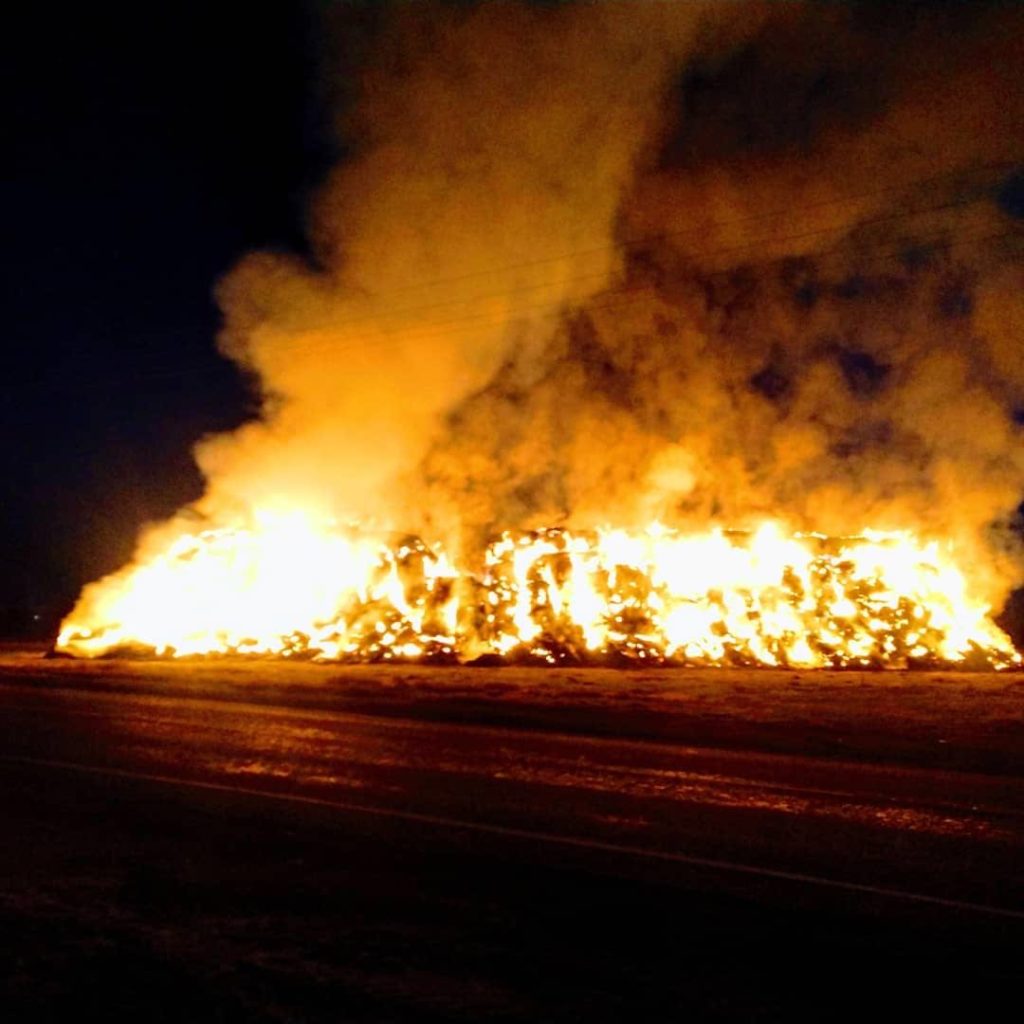 But this year’s instances are likely more sinister. The haystacks are starting on fire too late in the year to be naturally caused by decaying wet weeds, or damp hay.

“Sometimes you have people that just want to start a fire,” Eddie said.

Eddie hasn’t lost a stack, but he works with farmers who have.

Actually, these haystacks can be worth up to $100,000 depending on how large, what number of cutting it is, and the type of hay.

Catching possible bad actors is difficult for law enforcement and farmers. Each farmer might have more than a dozen stacks to babysit in far-flung areas.

“Grant County is a very large county, has a lot of rural areas, a lot of dark areas at night,” said Kyle Foreman with the Grant County Sheriff’s Office. “Sometimes the haystacks are at a peripheral part of a field that may not be be monitored or easily seen.”

Foreman says farmers can help law enforcement by raking around each stack so fresh shoe prints or vehicle tire tracks could be identified. And video cameras can help, too.

But farmers say sometimes video cameras can be stolen, or are just plain expensive to install and monitor.

Hay of all types is a major crop and export in the Northwest.

In 2018, Washington, Oregon and Idaho grew more than 3 million acres of hay, according to the U.S. Department of Agriculture. Also in 2018, Washington exported $504 million worth of hay overseas to Japan, South Korea, China and others. Hay was also the largest export by volume out of the Port of Tacoma and Port of Seattle, also known as the Northwest Seaport Alliance. The hay is highly sought after by customers like horse owners in Saudia Arabia and Japanese cattle operators, according to Peter McGraw with the Port of Seattle. 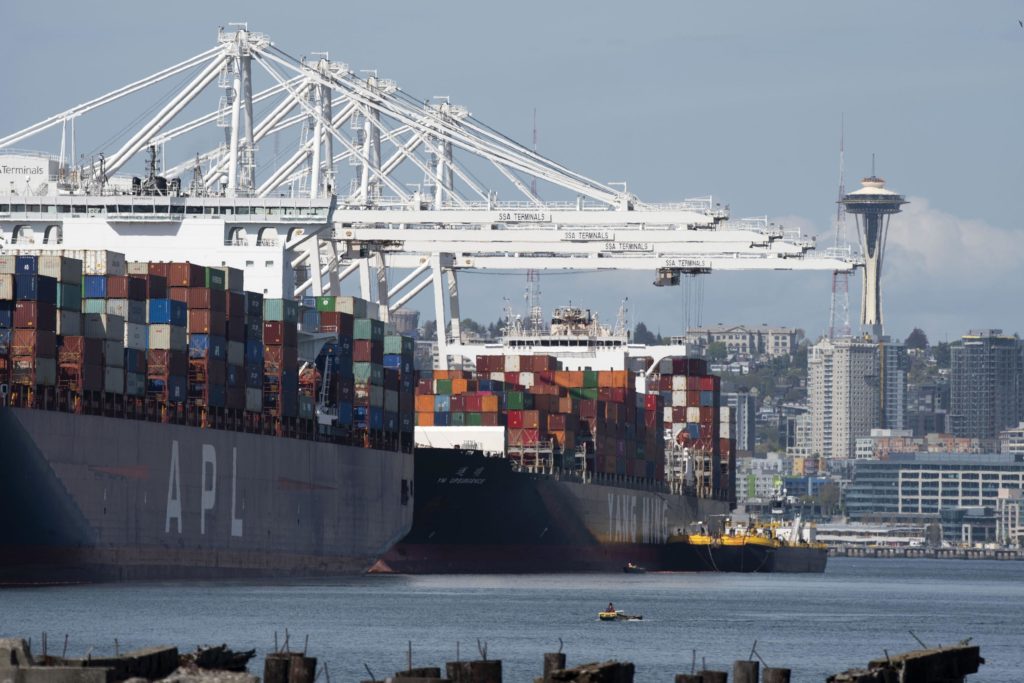 Containers are loaded on ships at Terminal 18 in Seattle April 26, 2019. Hay from the inland Northwest is shipped in containers to destinations around world. CREDIT: Northwest Seaport Alliance

So these suspicious fires are concerning to the entire industry, says Scot Courtright, a logistics manager at Courtright Enterprises, a hay exporter in Moses Lake.

Some might think farmers are trying to burn their own piles for the insurance money. But Courtright doesn’t think so.

Most stacks are insured, but there are often deductibles to pay of $5,000 or as much as $10,000 for the farmer. Plus, the farmer would likely have to pay back a deposit from the exporter he or she sold the stack to.

And hay exporters then have to explain to their overseas customers, Courtright said.

“It’s very frustrating,” he said. “You made a commitment to a customer and you have to explain to a customer why we can’t deliver.”

Once lit, firefighters often can’t put out hay stacks because there is too much fuel and it’s burning too hot.

Although it’s proven difficult so far, Kyle Foreman with the Grant County Sheriff’s Office is hopeful that watchful members of the public might report suspicious behavior around stacks. He calls the investigation a top priority.

There are now two rewards being offered: $5,000 from the Grant County Sheriff’s Office and $10,000 from the Arson Alarm Foundation.