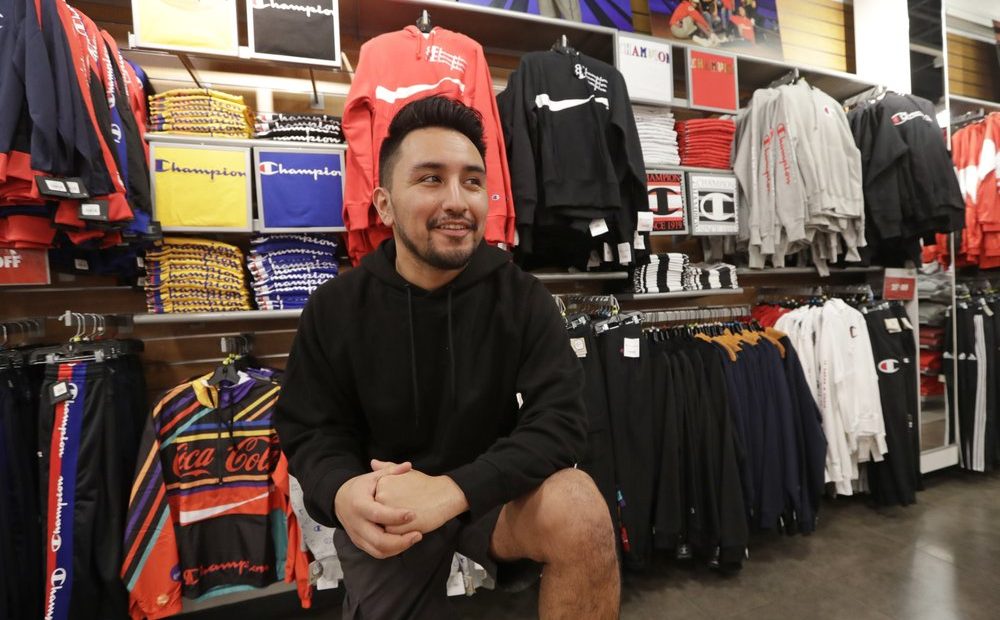 If You’re A Salaried Worker In Washington, You May Soon Be Eligible For Overtime With New Rules

Washington state is adopting some of the nation’s most aggressive overtime rules, restoring protections for hundreds of thousands of salaried workers and taking what supporters say is a crucial step toward rebuilding the middle class.

The Department of Labor and Industries finalized the rules Wednesday and will phase them in by 2028. By that time, salaried workers making up to about $83,400 a year will be entitled to time-and-a-half pay if they work more than 40 hours per week.

Workers making more than that could also get overtime unless they are certain types of professionals — such as those with higher degrees — or unless they are truly managers or executives, as demonstrated by their ability to hire and fire, direct other people’s work or make significant business decisions.

Many job categories will be affected, including shift managers at restaurants and retail establishments, office managers, some medical workers and other white-collar staff, officials said.

“We need to make sure the middle class shares in our state’s prosperity,” Washington Gov. Jay Inslee said in a news release. “Overtime protections ensure workers are fairly compensated when they work more than 40 hours in a given week — time that would otherwise be spent with their families and in their communities.”

Employees who are paid hourly have long been entitled to overtime. But salaried workers have generally been entitled to it only if they make less than a certain amount: about $23,660 under federal law, or more where state laws are more generous.

Those thresholds may have worked decades ago, when they meant that nearly two-thirds of salaried workers nationally were covered by overtime protections. But after a recession in the 1970s, lawmakers largely stopped updating them. Washington’s has been stuck at $13,000 since 1976. 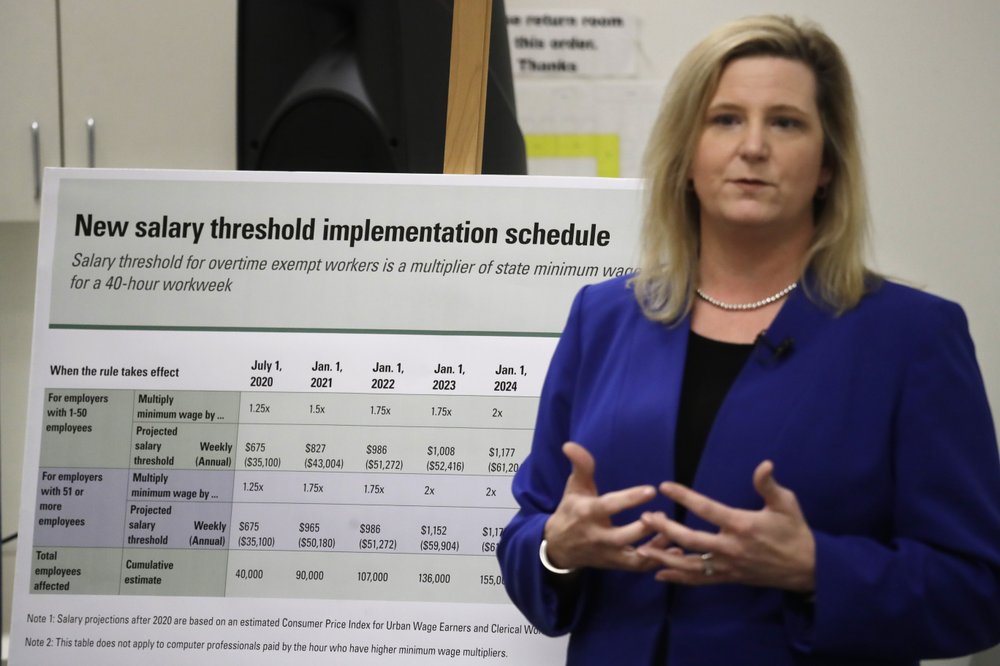 As people’s salaries rose with inflation, they found themselves no longer eligible for overtime. Businesses have also been able to convert hourly workers into salaried ones who make just more than the threshold as a way to avoid hiring additional staff or paying overtime.

In other cases, workers have been classified as managers when their actual duties more closely resemble those of hourly workers, officials said.

By some estimates, as few as 7% of salaried workers across the country are now entitled to overtime.

The federal government and several states, including California, New York, Pennsylvania, Colorado, Michigan and Massachusetts, have recently updated or started to update their overtime rules, but none have adopted a target threshold as high as Washington’s, said Paul Sonn, state policy program director with the National Employment Law Project.

The rules adopted by the Trump administration will raise the threshold to cover workers making up to $35,308 a year — a significant cut from the $47,000 limit proposed by the Obama administration.

“The overtime threshold is to the middle class as the minimum wage is to low-wage workers,” said Nick Hanauer, a Seattle venture capitalist whose think tank, Civic Ventures, advocates for progressive economic policies. “It is the indispensable labor protection for middle class people.”

Business groups in Washington have agreed that the state’s rules needed to be updated, but they criticized the plans as drastic. The Association of Washington Business warned when the proposed rules came out in June that they would be a shock to many businesses and that they could particularly hurt nonprofits.

The organization said many businesses might convert salaried workers to hourly ones, reducing scheduling flexibility.

After hearing extensive public comment, the department added two years to the phase-in period. The threshold will increase incrementally until it reaches 2.5 times the minimum wage — about $83,400 — by 2028. The rules will phase in more slowly for businesses with fewer than 50 employees.

At a news conference Wednesday, Labor and Industries Director Joel Sacks gave an example of one type of worker who will be protected : a shift manager who makes $40,000 a year but is expected to work 60 hours a week.

Under the new rules, that worker will be paid overtime for the additional hours, or the business will need to hire additional staff.

Among those who might be helped is Victor Duran, a co-manager of a sports apparel store south of Seattle. He said he makes about $52,000 a year and doesn’t get overtime, but is required to work at least 45 hours per week — and up to 60 during the holidays.

“We say bye to the family at the beginning of the season and say we’ll see them after Christmas,” Duran said.

Coronavirus cases in farm country have focused new attention on essential workers there, as well as the food supply chain. One issue is overtime. In most states, farm owners don’t have to pay overtime to their employees. Now, a case before the Washington State Supreme Court could change that. Continue Reading Washington Farmworkers Ask State Supreme Court For Overtime Pay 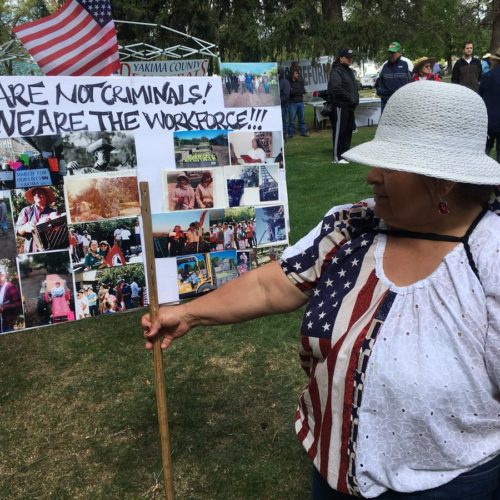 A class-action lawsuit argued in the Washington State Supreme Court Thursday is challenging the exemption of agricultural workers from earning overtime pay, alleging that it results in racial discrimination against the largely Latino workforce. Continue Reading Washington Ag Workers Are Exempt From Overtime. A State Supreme Court Case Could Change That 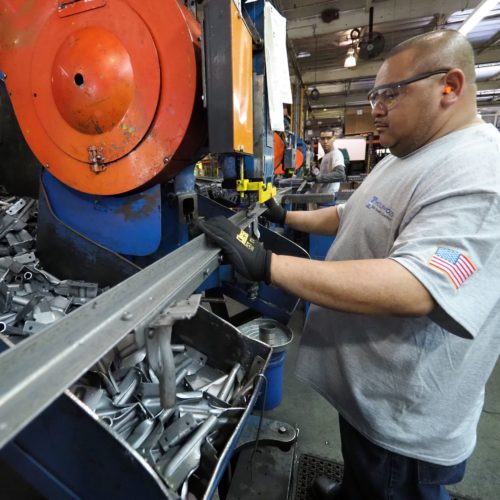 1.3 Million More Workers May Be Eligible For Overtime Pay. But There’s A Catch

A long-awaited update to federal overtime rules means about 1.3 million workers will be entitled to extra pay when they work more than 40 hours a week. But critics say it doesn’t go far enough. Continue Reading 1.3 Million More Workers May Be Eligible For Overtime Pay. But There’s A Catch