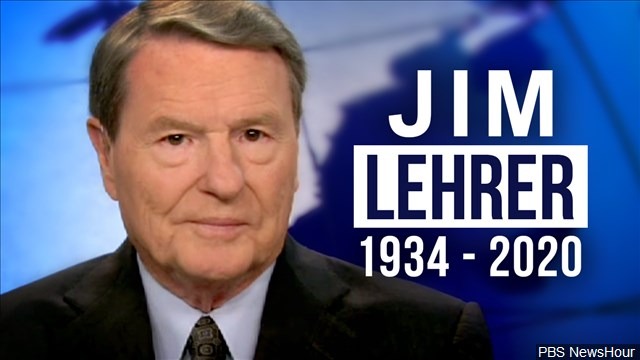 Jim Lehrer Dies At 85: An Intrepid Journalist And Co-Founding Anchor Of PBS NewsHour

PBS NewsHour co-founder Jim Lehrer, a giant in journalism known for his tenacity and dedication to simply delivering the news, died peacefully in his sleep at home on Thursday, at the age of 85.

For Jim, being a journalist was never a self-centered endeavor. He always told those who worked with him: “It’s not about us.”

Night after night, Jim led by example that being yourself — journalist, writer, family man, citizen — can be a high calling.

As an anchor of several iterations of the NewsHour, Jim reported the news with a clear sense of purpose and integrity– even as the world of media changed around him.

Jim and his journalism partner Robert MacNeil’s approach to reporting the news became known as the “MacNeil-Lehrer style of journalism.” Their approach helped lay the foundation for modern public media reporting.

The nine tenets that governed his philosophy included the assumption that “the viewer is as smart and caring and good a person as I am,” that “there is at least one other side or version to every story,” that separating “opinion and analysis from straight news stories” must be done clearly and carefully, and last but not least: “I am not in the entertainment business.”

Jim was born in 1934 in Wichita, Kansas, the son of Lois, a bank clerk, and Harry, a bus station manager.

He attended Victoria College in Texas and then studied journalism at the University of Missouri.

Having his father and brother before him enlist in the Marines, Jim served three years as an infantry officer in the late 1950s, including time in the Pacific. He saw no combat, but spoke often of how the experience shaped him.

“Seldom a day goes by, that I don’t know that I am doing something because of something I learned in the Marine Corps,” he said at a 2010 parade the Corps put on, in his honor.

Jim Lehrer was a co-founder of the PBS NewHour and co-hosted the program for 36 years.

In 1960, Jim married his lifelong partner and love, Kate Staples.

He also began his journalism career in earnest that year. He reported for both the Dallas Morning News and the Dallas Times-Herald from 1959 to 1966, covering local politics. He became the Times-Herald’s city editor in 1968.

On Nov. 22, 1963, a rainy morning, Jim was asked by an editor to check on one aspect of President John F. Kennedy’s visit to Dallas: Would the president’s limousine have a plexiglass bubble top attached to shield him and the first lady from rain? In 2014, he told the NewsHour that he approached a secret service agent to ask that question, and that the agent then proceeded to direct the bubble’s removal from the car.

Jim was also at the Dallas police station when Lee Harvey Oswald, Kennedy’s assassin, was brought in for questioning.

“I wrote his name down. I still have the notebook. I’m one of those people who asked, hey, did you shoot the president?” Jim recalled.

MacNeil, who would go on to become Jim’s lifelong friend and partner in journalism, also covered the assassination for NBC News. They both described the experience of bearing witness to such a significant historical event, and its long-lasting effects on them personally, during an appearance on the NewsHour.

“What I took away and have taken away — and it still overrides everything that I have done in journalism since — what the Kennedy assassination did for me was forever keep me aware of the fragility of everything, that, on any given moment, something could happen,” Jim said, “I mean, my God, if they could shoot the president–”

“And that president,” MacNeil added.

Jim said that because of that day, when he became city editor, he “had a rule that every phone that rang in that newsroom got answered, because you never knew who was on the other line.”

Lehrer’s television career was also launched in Dallas, at public station KERA. His move to the national stage with PBS was when he became a correspondent for what was then called the National Public Affairs Center for Television, or NPAT.

It was there he first joined MacNeil to cover another watershed moment — the Watergate hearings in 1973.

In addition to gavel-to-gavel coverage throughout the day, Jim presented a rebroadcast with analysis late into the night — some 250 hours in all. Jim Lehrer and Robert MacNeil’s broadcast helped guide viewers through hours of testimony, years before the concept of the 24-hour news cycle.

“The senators, as well as the rest of us who are interested, will have to make the ultimate choice between believing John Dean or Bob Haldeman. That’s the way it looks to me at 3:00 in the morning,” Jim reported at the time, while smiling. “Feel free to disagree.”

Some 70,000 letters poured in, praising the team and its work.

“We began life in October 1975 as ‘The Robert MacNeil Report,’” Jim said, reminiscing on the 40th anniversary of the Watergate hearings. “And months later, became ‘The MacNeil/Lehrer Report.’ In those days, we dealt with one story for half an hour.”

In 1983, the program expanded to one hour of news and analysis and was renamed The MacNeil/Lehrer NewsHour. Twelve years later, MacNeil retired, and the program became The NewsHour with Jim Lehrer.

Over the years, Jim interviewed numerous leading figures on the world stage, including Margaret Thatcher and Yasser Arafat in the 1980s, South Korean President Kim Daejung and Chinese leader Jiang Zemin in the 1990s, and Jordan’s King Abdullah and Afghan President Hamid Karzai in the 2000s.

Jim daily examined major turning points in the life of the nation and world. He pressed experts from the business world and military brass, as well as America’s top political figures.

During one of Jim’s most notable interviews, he pressed President Bill Clinton about accusations regarding his sexual relationship with White House intern Monica Lewinsky and the subsequent investigation into his conduct.

“The news of this day is that Kenneth Starr, independent counsel, is investigating allegations that you suborned perjury by encouraging a 24-year-old woman, former White House intern, to lie under oath in a civil deposition about her having had an affair with you,” Jim said in the interview with Clinton. “Mr. President, is that true?”

Jim was calm and careful in moments of crisis, as demonstrated by his coverage of the September 11 terrorist attacks.

“I’m Jim Lehrer. Terrorists used hijacked airliners to kill Americans on this, September 11, 2001,” Jim reported on national television. “Another day of infamy for the United States of America.”

“Jim’s intelligence is so laser-like, no matter what he’s applying it to, that’s how he treats any situation, no matter how we treat a certain news story or what a news story means,” MacNeil said this of his partner.

“I learned a lot from him, about his very direct manner of interviewing,” MacNeil added. “And not being afraid to say ‘you don’t understand’ or ‘you don’t know.’ But also his extraordinary ability to listen. You know the hardest thing to do on TV is to listen.”

MacNeil described how Jim was able to moderate a discussion of several people and never drop important points.

“He’s brilliant at that. Nobody does it better than he does. Brilliant. I learned a lot about the fundamental meaning of fairness,” MacNeil said.

Perhaps nowhere was this seen better than on the largest stage of all, with upwards of 60 million viewers: as moderator of 12 presidential debates– more than any other person in U.S. history.

For Americans, Jim would say, the debates are the one chance to take the measure of candidates side by side.

“As soon as the process really gets underway it’s, ‘I’m Alice in Wonderland going in the rabbit hole. Praying to come out on the other side,’” Kate said in 2012 when discussing Jim’s book, “Tension City,” which was a reflection on his role in presidential debates.

Jim likened moderating the debates to “walking down the blade of a knife.”

“It’s not a lot of fun, but if you get to the other end, it’s really exciting,” Jim said in 2012. “When a debate is over that I moderate, I want to be able, I want everybody to say, O.K., here you have seen and heard the candidates for president of the United States on the same stage at the same time talking about the same things. You can judge them. I mean, do you like this guy? Is he telling the truth? All that kind of stuff. And you see them right there together — it’s a huge test.”

But Jim’s life wasn’t all tension and worldly affairs.

One of his great passions was on display in his basement at home and his office at work: the intercity bus memorabilia Jim had collected over the years. It was a reminder of his father’s career and his own childhood in Kansas.

There was also Jim Lehrer, the prolific writer. He was the author of some 20 novels, drawing on his life as a newsman, as well as his interest in history and politics. He also wrote plays and three memoirs.

One early novel, “Viva Max!”, was turned into a film starring Peter Ustinov and Jonathan Winters. The political satire featured a modern day Mexican general who crosses into the U.S.. to retake the Alamo.

“I write a little bit on my fiction everyday. It’s just what I do,” Jim once said.

He was given the National Humanities Medal by Clinton, elected as a fellow of the American Academy of Arts and Sciences, and with MacNeil, inducted into the Television Hall of Fame.

Although he insisted on not being the center of attention when reporting the news, at one important juncture in his life, Jim did tell a deeply personal story: the major heart attack that almost killed him in 1983.

The documentary “My Heart, Your Heart” captured how the scare led him to a change in diet and lifestyle. Among other things, he would become a committed afternoon “napper” — there was no disturbing Jim between 1 p.m. and 2 p.m.

One priority that never changed was his family. Jim and Kate — herself the author of three novels — had three daughters: Jamie, Lucy and Amanda. He also had six grandchildren.

Jim stepped down as full-time anchor of the NewsHour in 2011.

Late in his tenure, he closed a speech to PBS stations managers this way:

“We really are the fortunate ones in the current tumultuous world of journalism right now, because when we wake up in the morning, we only have to decide what the news is and how we are going to cover it. We never have to decide who we are and why we are there. That is the way it has been for these nearly 35 years and that’s the way it will be forever. And for the NewsHour, there will always be a forever.”