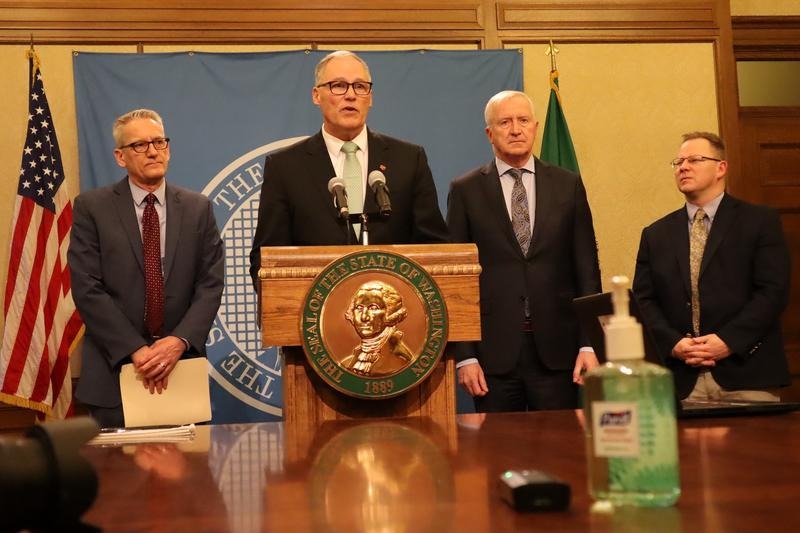 Washington Gov. Jay Inslee said Monday that his emergency powers would allow him to order the cancellation of large public gatherings to control the growing coronavirus outbreak in his state. However, he told reporters during a briefing in Olympia that he does not plan to use that authority at this time.

Inslee said folks, especially the elderly, should begin to think about avoiding large events and assemblies to reduce the risk of catching the virus.

“We are not making a request formally right now for events to be cancelled, but people should be prepared for that possibility and need to be thinking about it,” Inslee said.

The governor added that there is no simple equation for when to cancel public gatherings.

“This is a day-to-day decision,” he said. “We are intensely interested in this. We’ll make the right decision at the right time.”

Washington state schools Superintendent Chris Reykdal stood beside Inslee at the coronavirus briefing. Reykdal said the decision to close schools is a local one to be made with local health departments. He emphasized that this aspect won’t be decided at the state level.

“To date, not a single health department has called for a school shutdown,” Rekydal said. “That said, the law does allow local superintendents to consider other factors. So, out of an abundance of caution we’ve had school districts make that decision.”

At least 13 schools in Washington state, including the Colville School District, shut down temporarily on Monday due to coronavirus concerns so the buildings could be disinfected.

“There is no presumption that sending a bunch of students home necessarily changes or enhances outcomes just given the patterns particularly of what middle schoolers or high schoolers do when they go home,” Reykdal noted. “It might be a mall, it might be a movie theater. It might be a lot of other stuff.”

Inslee, Reykdal, state Secretary of Health John Wiesman and Emergency Management Director Robert Ezelle spoke at a joint briefing in Olympia. That briefing followed one in Seattle in which state and King County, Washington, health authorities announced the number of confirmed coronavirus infections in the state had risen to 18 and that six patients had died of COVID-19, the coronavirus disease that’s spreading across the globe. Those six deaths represent all of the fatalities to date in the U.S. from the novel disease.

A student-led online petition to the Lake Washington School District seeking to close the schools until more is known about COVID-19 drew 9,000 signatures within one day of starting to circulate Sunday. The Lake Washington district is home to the hard-hit nursing home and the Kirkland hospital where the coronavirus deaths occured over the weekend.

Wiesman and Inslee on Monday repeated key pieces of advice for individuals to control the spread of infectious disease. These include washing your hands thoroughly and regularly, frequently cleaning “high-touch” surfaces such as countertops or doorknobs, covering your cough and staying home if you feel sick.

“Our priority now is to slow the spread of this dangerous virus,” Inslee said. “We can all be leaders in this effort against this virus.”