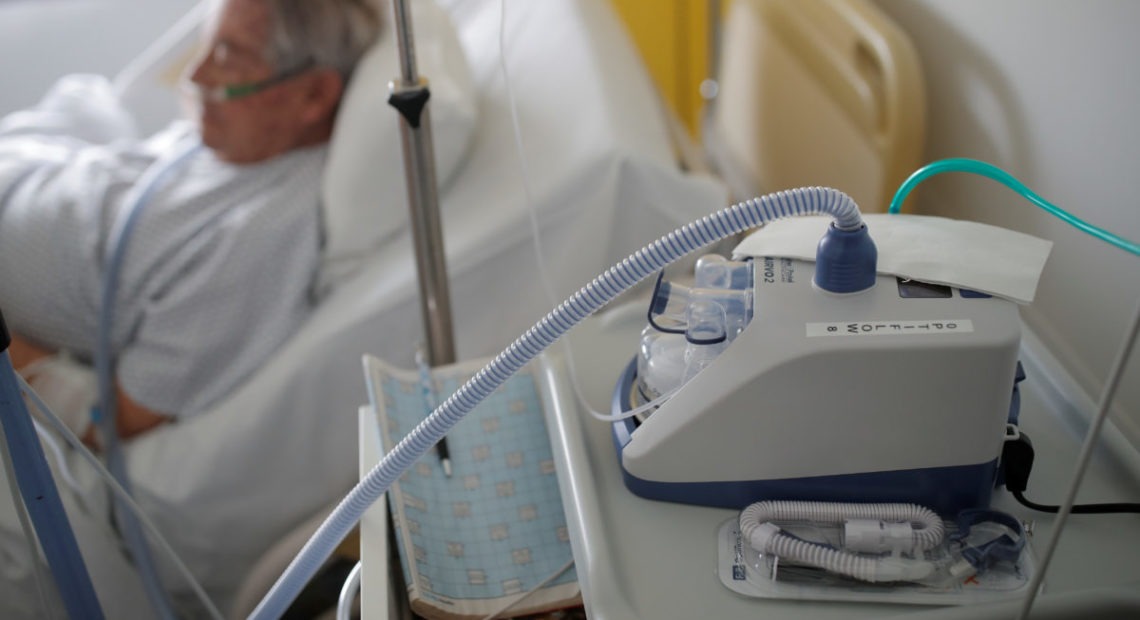 U.S. Needs More Ventilators For COVID-19 Patients. What Are They And What Do They Do?

COVID-19 is stretching health care resources in many different ways, but there’s a key piece of equipment getting a lot of attention: ventilators.

So, what is a ventilator, and why does it matter?

What does a ventilator do?

The machine helps with two important functions: get more oxygen into the lungs and take carbon dioxide out.

“A ventilator is a fairly fancy piece of technological equipment which is designed to breathe for somebody who is unable to breathe effectively on their own,” said David Hill, a pulmonologist who sits on the board of the American Lung Association. 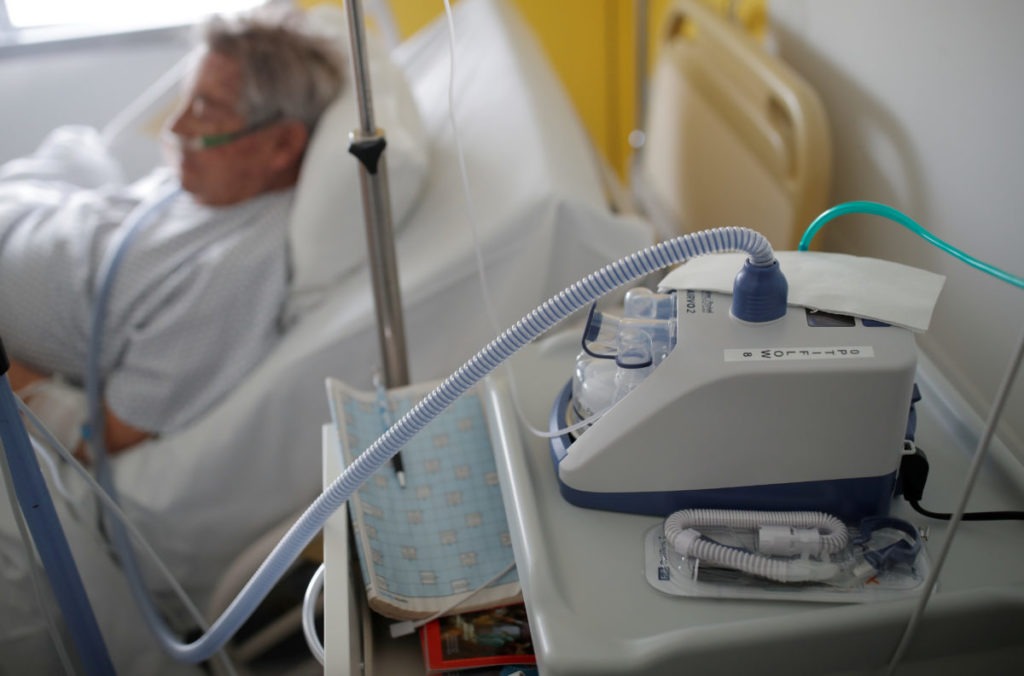 A nasal ventilator is pictured as a patient suffering from coronavirus disease (COVID-19) is treated in a pulmonology unit at the hospital in Vannes, France. CREDIT: Stephane Mahe/Reuters

Lungs are interwoven with blood vessels, which is how oxygen gets into the bloodstream and carbon dioxide gets carried out. COVID-19 makes this exchange more difficult in the most severe cases because a patient’s lungs are inflamed and filled with fluid. (This also happens with infections like pneumonia).

A ventilator essentially helps a patient’s lungs accomplish this task. Modern ventilators consist of a pump machine and a tube that health care professionals slide into your windpipe to control airflow.

It’s important to understand that ventilators do not cure COVID-19, but they help support lung function while a patient’s body is fighting the infection.

How ventilators were developed

Robert Hooke, the 17th-century polymath scientist who coined the term “cell,” was the first to experiment with mechanical ventilation — and in a gruesome manner, by today’s standards. After punching holes into the lungs of a live dog, he used bellows to blow into the poor dog’s airway. The test showed that mechanical ventilation can help do the work of damaged lungs.

In the 1920s, two Harvard University scholars, Philip Drinker and Louis Agassiz Shaw, created a new form of ventilation as a treatment for polio, a disease that in its most severe cases paralyzes lung muscles. This ventilator was the predecessor of the “iron lung,” which enclosed the patient in a tube with their head poking out. When the pressure inside the iron lung was lowered, the patient’s lungs would expand and air would be pulled in through their airway. Then, the pressure inside the tube would increase, pushing the air back out of the lungs.

Fast-forward to the 1950s during the polio epidemic in Copenhagen, Denmark. Among other ideas, doctors turned to using cheaper ventilators that actively pump air directly into and out of the lungs. When one Danish hospital introduced these ventilators, its polio mortality rates dropped “almost overnight” from more than 80 percent to about 40 percent. When you can use them, ventilators save lives. 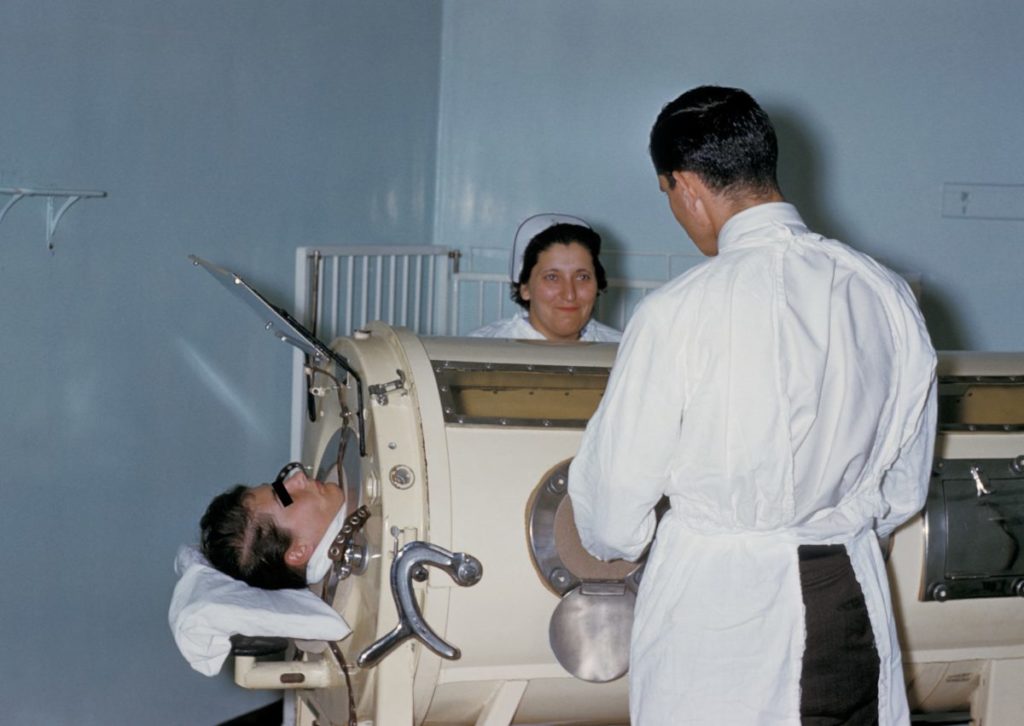 A polio patient in an iron lung, 1960. Courtesy of the CDC

How many ventilators are available now?

A 2018 analysis from the Johns Hopkins University Center for Health Security estimated we have around 160,000 ventilators in the U.S. If the “worst-case scenario” were to come to pass in the U.S., “there might not be” enough ventilators, Dr. Anthony Fauci, director of the National Institute of Allergy and Infectious Diseases, told CNN on March 15.

“If you don’t have enough ventilators, that means [obviously] that people who need it will not be able to get it,” Fauci said. He stressed that it was most important to mitigate the virus’ spread before it could overwhelm American health infrastructure.

Reports say that the American Hospital Association believes almost 1 million COVID-19 patients in the country will require a ventilator. Not every patient will require ventilation at the same time, but the numbers are still concerning. Dr. Daniel Horn, a physician at Massachusetts General Hospital in Boston, warned in a March 22 editorial in The New York Times that “There simply will not be enough of these machines, especially in major cities.”

How can we boost supply?

Every country wants to avert the terrible choices Italian doctors have been having to make over who should get ventilator support. Doctors on the front lines there are saying that “first come, first serve” is out the window, and that they are focusing on saving the younger patients who have a better chance of surviving.

Traditional manufacturers of ventilators, like Philips, and Medtronic are ramping up production, but it’s all hands on deck. Some Italian volunteers are using a 3D printer to produce certain ventilator components. In one case, when an Italian hospital’s usual supplier of high-end valves said they couldn’t fulfill the order, the volunteers stepped up and produced dozens – and for 10,000 times cheaper. Reportedly, these valves have helped at least 10 patients on ventilators.

Elon Musk, CEO of Tesla and Space X, tweeted on Friday that his companies are “working on ventilators” after New York City Mayor Bill de Blasio pleaded for him to start. Other manufacturing giants, like GM, are also chipping in.

In his op-ed, Horn called for the U.S. government to develop a strategy to not only compel manufacturers to make ventilators, but to figure out which hospitals should receive them and how to train more health care workers to use them.

Ventilators are vital to treating patients diagnosed with COVID-19, but they are also just “one piece of that puzzle,” Hill said. “Making the protective gear and the testing gear for COVID is probably a simpler thing to handle. And if we can effectively isolate patients and help stop the spread, that may be as important as making more ventilators.”