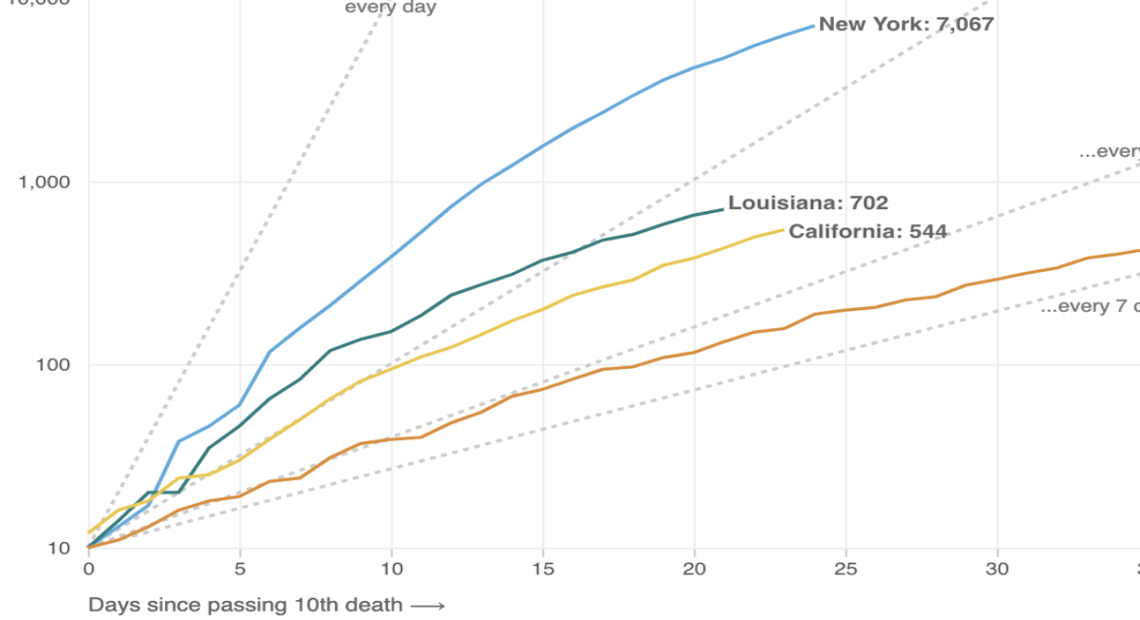 Are We Flattening The Curve? States Keep Watch On Coronavirus ‘Doubling Times’

As coronavirus numbers have ticked steadily upwards in some U.S. states and cities, officials have watched one specific figure to see whether they’re facing a flattening curve or runaway outbreak: the doubling rate.

Simply put, it’s how many days it takes for the number of coronavirus cases, hospitalizations or deaths to double. The shorter the time frame, the steeper the curve and the faster the growth.

In an encouraging sign, health officials in several states are starting to see doubling rates slow, which means the curve is flattening. Hospitalizations and deaths are still growing, but not as quickly.

This past week, New York City’s doubling rate for new cases has fallen to approximately every eight days, as of Thursday. Though deaths continued to rise, Cuomo says new hospitalizations may have reached a plateau. 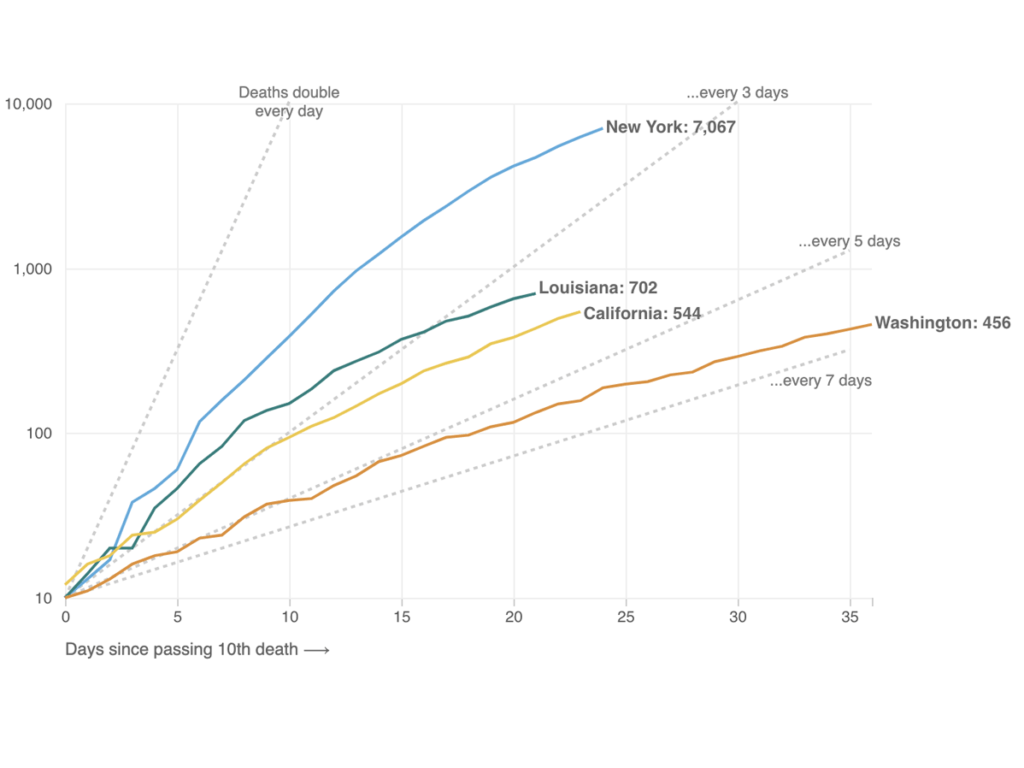 Within the first week of passing 10 deaths, Washington deaths doubled every five days. Over the past week, growth rate has slowed, and deaths in the state doubled every nine days. This chart uses a logarithmic scale, where each increment on the y-axis represents a tenfold increase in the number of deaths. Dotted lines show the slope of deaths doubling every one, three, five or seven days. CREDIT: Stephanie Adeline and Lauren Sommer/NPR

While a day or two difference in doubling time may not seem like much, it can have a massive effect on how many patients are flooding into hospitals, potentially overwhelming medical systems.

“For constant exponential growth, you would expect cases to double consistently over a three- or four-day period,” says Nick Jewell, a biostatistician at the University of California, Berkeley. “The whole point of social distancing is to make that doubling time longer and longer.”

Though other communities across the country are tracking slower doubling rates than New York, these are still a cause for concern.

“If we can slow doubling time to 10 days, we might have enough hospital beds to handle the surge and get fully through the surge,” said Chris Farnitano, health officer for Contra Costa County in the San Francisco Bay Area on March 31. “Currently, we’re at about eight days on our doubling time for our hospital cases.”

As of this week, that county is in better shape than it expected. For the past seven days, the number of coronavirus patients in Costa Costa’s hospitals has remained flat.

Experts say no matter what a community’s doubling time is, the key is seeing it get longer.

“The slowing of the rate is enormously important,” says Jewell. “Ultimately, you will end up with a smaller fraction of the population infected if you lower the rate. And you buy a lot of time by slowing it and that gives an opportunity for preparation by hospitals and health care workers.”

While many officials are watching new coronavirus cases, epidemiologists warn that case counts may not be the most reliable indicator of how the outbreak is spreading. Testing has been rolled out inconsistently across states because of lack of available tests, swabs or capacity at laboratories, so in many places, the true number of positive cases is unknown.

California saw a spike in new coronavirus cases over the weekend of April 4-5, but over the same time period, labs finally processed the bulk of a 50,000 test backlog, some of which were collected from patients as long as a week earlier.

Hospitalizations and deaths are more concrete numbers, but they’re delayed. So trends aren’t seen for weeks since it takes more time for patients to develop serious symptoms. Hospitals and public health officials have also been unable or have refused to release hospitalization data.

Longer doubling times produce a smaller, flatter surge, but they also mean the public must continue social distancing to maintain that trajectory.

“The trade-off is that we have to be doing the intervention for a longer period of time,” says Jewell. “But that’s over having a catastrophic number of infections and a high number of deaths.”

Ultimately, officials are watching for the peak of the curve, when coronavirus cases and deaths begin steadily decreasing day after day. But even that can be elusive if people change their behavior.

“If you say ‘the peak is going to be tomorrow’ and people start rushing around again, then the peak won’t be tomorrow because people start causing transmission,” Jewell says.