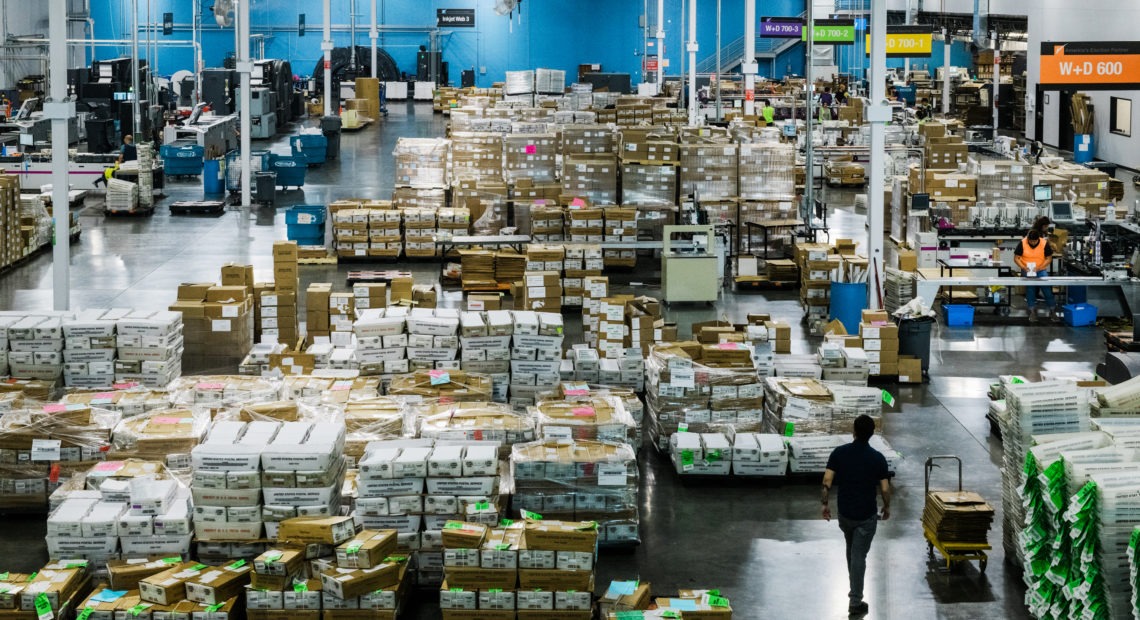 More Americans than ever before are expected to vote by mail this year because of concerns about the coronavirus. One challenge facing election officials now: how to print and mail the millions of ballots voters are expected to request in the coming months.

Nearly a quarter of the 136 million presidential ballots cast 2016 were mailed in. That number could easily grow to well over half this year, especially if the health risk continues. 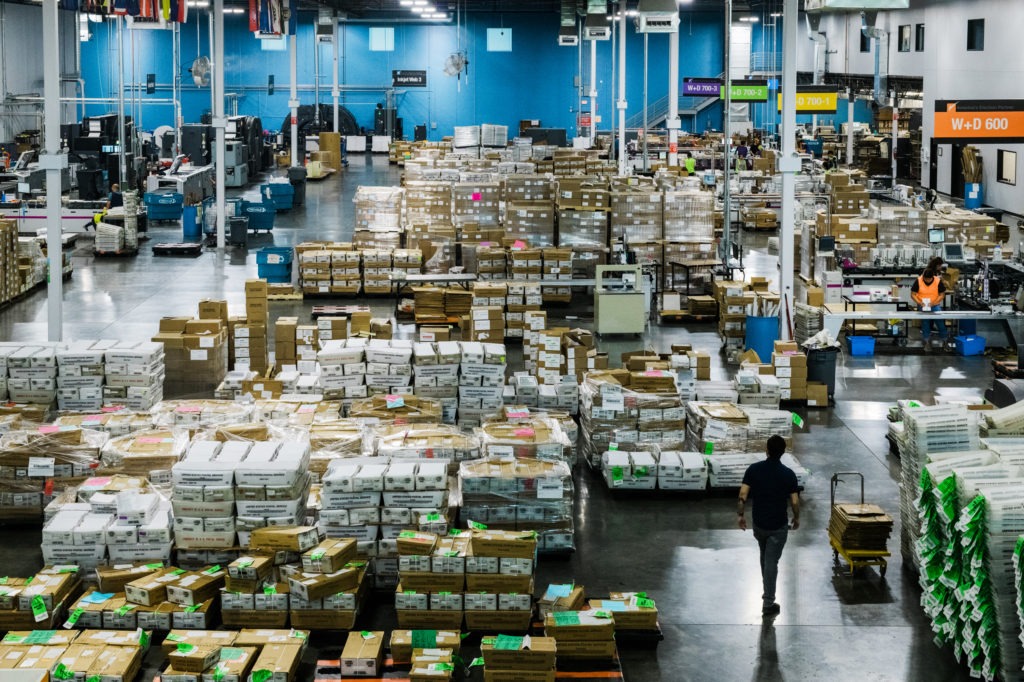 One of of the biggest such vendors in the country is Runbeck Election Services. The company’s 90,000-square-foot facility in Phoenix, Ariz., is already bustling, and things are expected to get a lot busier soon.

“This year we are going to mail probably around 40 to 50 million pieces. We’ll print probably close to 80 million, up to 100 million pieces when you count inserts,” said Jeff Ellington, the company’s president and chief operating officer. He gave NPR a virtual tour of the facility via FaceTime because pandemic travel restrictions prevented an in-person visit.

Ellington explained that getting ballots to the right voters is a complicated, multi-step process. States need to decide what their ballots will look like and to get approval from the U.S. Postal Service for the design of the envelopes. After those envelopes are secured, companies like Runbeck step in.

“So I’m on the production floor looking at one of our HP printing presses and it takes a roll of paper that starts out at a thousand pounds, and then it goes through the machine, gets printed, and then gets trimmed to size,” Ellington said, adding that the machine can print about 20,000 ballots an hour.

Standing near the printer are stacks of massive rolls of white paper that will eventually become ballots for millions of American voters. On this day, the company is producing mailings for Iowa, Nevada, Arizona and Georgia. The latter’s ballots need to be delivered quickly for Georgia’s June 9 primary, which was delayed from March due to the pandemic.

Ellington shows how another machine folds the ballots, which emerge in neat stacks and are put in plastic bins by workers. They’re then taken over to another machine called an inserter. On this day, the inserter puts ballots, instructions and an “I voted” sticker into envelopes for Las Vegas voters. 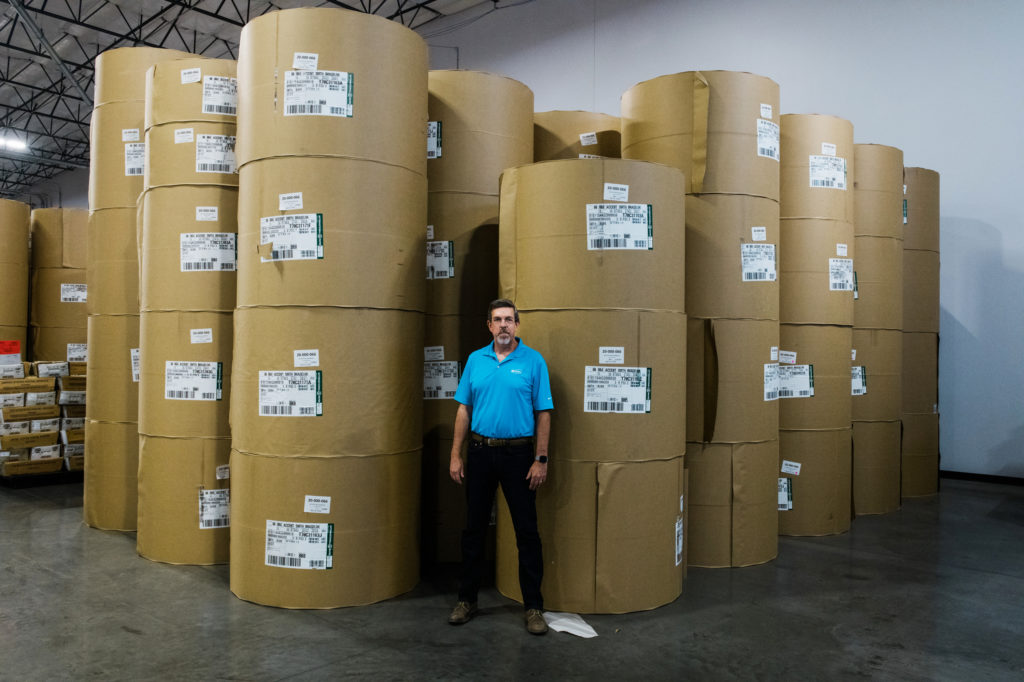 “You’ll see the ballots being loaded, going down a conveyor belt and then inserted into an envelope,” Ellington said.

This is one of the most sensitive parts of the process. Each ballot has a bar code that tells the machine exactly what kind of ballot it is — there can be thousands of varieties in a single election — and then determines from a database of voter registration records which person on the list should receive that particular ballot.

“And then your name and address will be printed on the envelope once that process is complete,” said Ellington.

Runbeck already has five inserters and has ordered 11 more — the most its manufacturer can produce by November. Ellington said this will triple the company’s capacity, but is unlikely to meet what’s expected to be this year’s unprecedented demand with so many voters nervous about going to the polls in person.

His company and others are warning states to decide soon what they plan to do or they could be out of luck.

“Decision-making needs to be right now,” CEO Michael Runbeck told the U.S. Election Assistance Commission at a recent online hearing about holding an election during a pandemic. “We cannot gear up, we cannot build equipment fast enough if you wait until July to place your orders.”

Kim Wyman, the secretary of state for Washington, which has a long history of widespread mail-in voting and is an all vote-by-mail state, also spoke about the challenges for states trying to quickly shift to a lot more absentee voting. 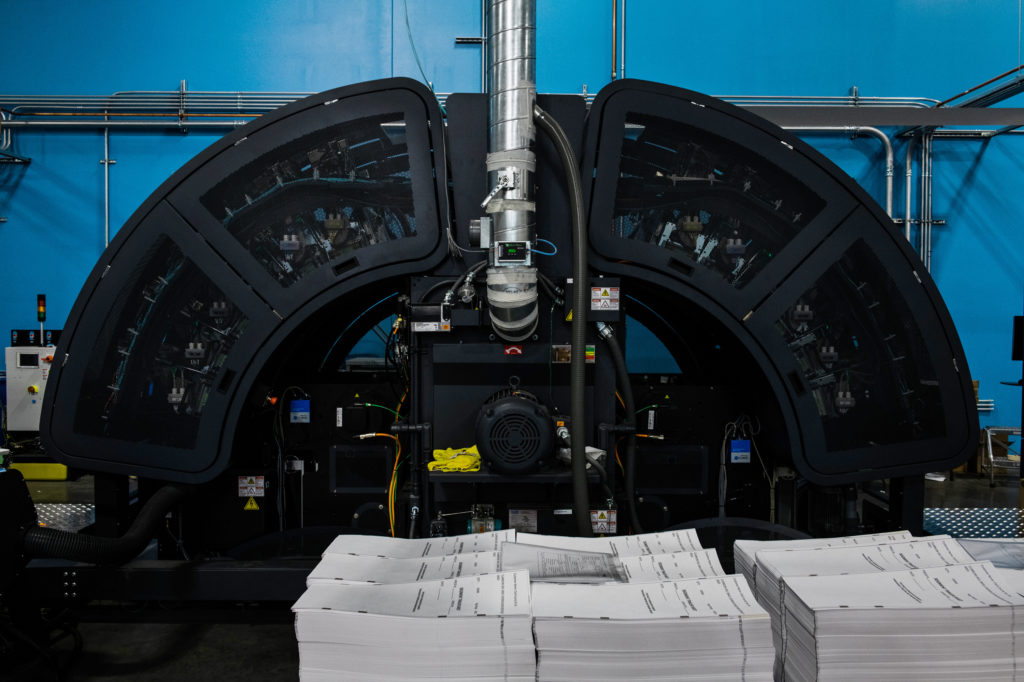 And those are only a few things election officials need to consider, Wyman said.

Among the other questions: Do states have their voter registration records digitized so ballots can be sent out efficiently and signatures verified? How will all those ballots be opened and counted on Election Day? Is there enough paper available to provide millions of envelopes on such short notice?

That’s not to mention educating voters about how to use a form of voting they might not be used to.

“I am very concerned that with only six months really to implement vote-by-mail or absentee voting in a jurisdiction that it’s going to be a heavy lift, and if it’s not rolled out properly, we will lose confidence in the results of the election,” Wyman told the commission.

Some states, like Wisconsin and Ohio, have already run into glitches switching to largely vote-by-mail primaries at the last minute.

Back in Phoenix, Jeff Ellington is worried too.

Not everyone will vote by mail, of course, and some election offices will handle the mailing and printing of ballots on their own. But that still leaves a big gap to fill in a short period of time.