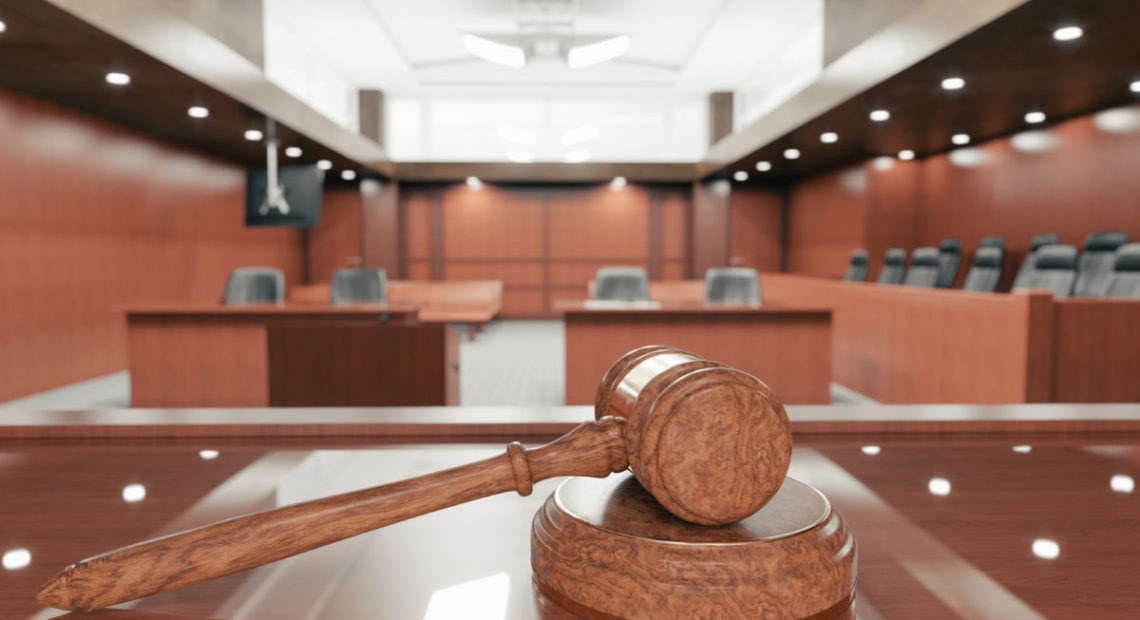 Criminal Defendants In Limbo As Trials Put On Hold During Pandemic

When the coronavirus pandemic shut down courtrooms around the country, criminal defense attorneys had to quickly figure out how to continue to serve their clients.

Over the last two months, a combination of factors have delayed court proceedings, leaving criminal defendants in limbo as they wait for their stalled cases to move forward. Most court services have been restricted to essential functions, which include arraignments and bail hearings. Criminal jury trials have been put on hold, and states have changed defendants’ speedy trial rights due to the emergency court closures. Thousands of civil and criminal cases are becoming backlogged, attorneys and judges told the PBS NewsHour.

“Everything is kind of suspended animation,” said Nina Ginsburg, president of the National Association of Criminal Defense Lawyers.

On any given day, about 631,000 people are being held in local jails in the U.S., of whom roughly 74 percent have not yet been convicted, according to 2020 data. Many are held as a result of their inability to post bail. A report by the Department of Justice determined that from 1990 to 2004 the median bail for detained felony defendants in state courts was $15,000. Through the bail bond system, defendants can pay a percentage of their bail — which is 10 percent in most states — in addition to some form of collateral to get out of jail while they await trial. That is still a prohibitive price for many in the U.S.

Amid the pandemic, some jurisdictions have moved to suspend arrests for nonviolent offenses, or to release vulnerable inmates to reduce jail overcrowding. But even with these efforts, many pretrial detainees — those not yet convicted of a crime — are sitting in jails, uncertain of when their cases may proceed.

Defendants have a constitutional right to a “speedy” trial, as laid out in the Sixth Amendment, though it does not specify what speedy means. Many states have codified these rights by setting parameters for that length of time. In California, for example, trials must commence within 30 to 60 days of an arraignment, depending on the crime of which the defendant is accused. Felony cases must come to trial within 60 days while lesser crimes must come to trial sooner, or the case could be dismissed unless the defendant waives the requirement. Other states, like Texas, do not define a fixed speedy trial period.

Amid the pandemic, states have modified those speedy trial rights to accommodate state court closures. Without specified legal deadlines to move their cases along, pretrial detainees can be forced to wait in jail until courts can reopen. A number of judges and attorneys expressed uncertainty about when in-person proceedings will resume at full capacity.

“In this unprecedented time, public defenders understand that, for now, there is a need to suspend speedy trial [rights],” said Rosalie Joy, vice president of defender legal services at the National Legal Aid and Defender Association. “But the concern is: when does that end?”

As states begin to gradually reopen non-essential businesses and services, courts in Virginia, Kentucky, Nevada and beyond have announced plans to resume in-person services. Some have also expressed plans to begin in-person jury trials in June or July. However, resuming these services requires careful planning in order to maintain public safety and there will continue to be limits for most systems, which means backlogs will grow as well.

In a memo earlier this month, Virginia’s chief justice wrote that for each week court dockets are limited only to emergency cases, which do not include criminal jury trials, approximately 60,000 more cases are added to the system’s backlog for general district courts. Another 18,000 cases are added to the juvenile and domestic court backlog and 19,000 are added to circuit courts, he added.

In Texas, the state’s Chief Justice Nathan Hecht told the NewsHour that courts were able to conduct more than 84,000 hours of hearings using the video-conferencing platform Zoom within the first seven weeks of court shutdowns. Still, that was only about 20 percent of what the courts would usually be able to do, Hecht added.

“What do you do when you can’t even communicate with your client?”

Despite data indicating a decline in coronavirus hospitalizations and deaths in the U.S., some regions in the country are still experiencing spikes. Several health experts have also expressed fears that reopening too quickly will produce a rise in cases. They also fear a second wave of the virus could happen in the fall or winter.

Jails and prisons, in particular, have become hotspots for virus transmission. At one Ohio prison, 73 percent of about 2,500 inmates tested positive for the virus in April. Another facility in Indiana last month reported 92 percent of its 137 inmates tested positive. A report from the Legal Aid Society showed that the rate of infection in New York City’s jails were several times higher than the infection rate among the city’s broader population.

The health concerns in correctional facilities have led to lockdowns that restrict defense attorneys’ access to their clients. With in-person restrictions in effect, Ginsberg said some portions of her job are “nearly impossible” to do. Defense attorneys rely on in-person meetings with clients to discuss confidential details about their cases, as phone calls are more susceptible to monitoring.

“There’s only so much you can do or say over the phone,” Ginsberg said. “What do you do when you can’t even communicate with your client?”

Attorneys are also tasked with investigating the charges against their clients and identifying potential witnesses and evidence, a responsibility that is much more limited in today’s climate.

Public defenders’ offices, which already contend with insufficient staffing and a lack of funding, are struggling with their limited resources during the pandemic, Joy said. She noted that a number of offices reported that they did not have laptops to give to attorneys to work from home. Others don’t currently have shared digital case management systems that would enable them to access important information remotely, Joy said.

A couple months before the pandemic hit, public defenders in Maryland received laptops, said Kirsten Downs, district public defender for Baltimore City. That access to technology has been invaluable in helping attorneys continue their work remotely, she said.

The slew of various technological and logistical obstacles in courts throughout the country leave many defendants waiting in jail facilities, where they are vulnerable to being infected with COVID-19. As defense attorneys push for inmates to be released, some prosecutors are also working to help reduce jail populations. 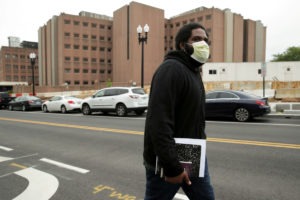 Dontaine Thompson walks to meet his ride after being released from the District of Columbia Central Detention Facility, where he said he tested positive for the coronavirus on April 9 and was released from jail early, due to concerns during the COVID-19 disease outbreak in Washington, U.S. April 28, 2020. Thompson suffered multiple symptoms of the disease, including fever, and says he was kept in the general population and housed with another inmate with a positive diagnosis. CREDIT: REUTERS/Jonathan Ernst

Between March 1 and May 1, Baltimore City released about 1,200 pretrial defendants, according to the Maryland Department for Public Safety and Correctional Services. They developed a community reentry program specifically targeted at connecting the newly freed individuals with services to assist their reentry transition, Downs said. Still, the pretrial population in Baltimore City was 1,751 as of May 19, according to the Maryland Office of the Public Defender. The city’s average daily jail population was 1,797 pretrial detainees in January and 1,847 in February.

In San Francisco, the office of District Attorney Chesa Boudin has reduced the jail population by about 40 percent since March 16. Boudin’s office has delayed filing new charges, and has released people charged with low-level offenses who are awaiting trial, as well as those with health conditions. That leaves about 700 people still detained, more than 80 percent of whom are awaiting trial, Boudin told the NewsHour.

To mitigate the backlog of operations, other districts are doing what they can remotely to keep cases moving forward. In Jefferson Parish, Louisiana, Judge Scott Schlegel took charge of implementing video conferencing, shared online scheduling, digitized records and other technology to make his court system more efficient.

As many courts remain closed, some are looking for ways to conduct jury trials remotely. But several criminal procedure experts said they don’t see an effective way for criminal jury trials to take place using remote technology. It’s also unclear whether remote trials would be constitutional.

“A fair jury means one that will pay attention and stay focused,” Murad said. “This isn’t a meeting with your colleagues or Zoom trivia night with your friends. … The decision of a criminal jury very literally impacts someone’s freedom and liberty. I’m skeptical the magnitude of [that] task can be expressed by Zoom.”

Trials are meticulously documented by court reporters, and the visible emotions or physical appearance of a person in court can factor significantly into jurors’ decision making. Some research studying judges’ responses to video conferencing indicates that remote criminal court appearances have a dehumanizing effect for defendants, leading to harsher rulings such as higher bail amounts. All of these factors will need to be considered moving forward in order to deliver fair and timely justice for both victims and defendants, said defense attorneys and prosecutors who spoke to the NewsHour.

“I don’t know what it means for the future,” Murad said. “I just refuse to believe we aren’t creative enough to come up with a solution that preserves people’s rights.”