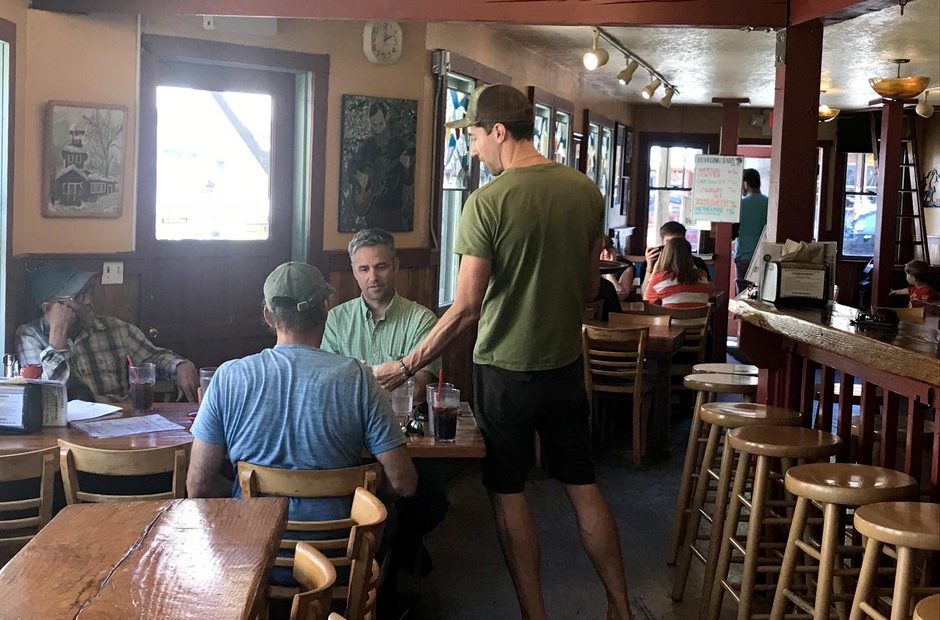 When Jennifer Tate walked into her local hardware store early this Sunday morning, she couldn’t believe what she saw.

“I was shocked. The parking lot was actually full at the Winthrop Ace Hardware. I’ve never seen it full before,” Tate said.

She donned her mask and went inside to grab a part for a greenhouse.

“It was packed. Lines of people waiting for fishing licenses – no one that I recognized. Of course, it’s such a small town here that all the locals, we recognize each other,” Tate said. “It was pretty stressful.”

Tate lives in north-central Washington’s Methow Valley, which usually thrives on tourist season. But this year Okanogan County is not yet in Phase 2 of Washington’s “Safe Start” plan. (Phase 1 and 2 ask people to recreate and explore close to home. All non-essential travel can resume in phase three.)

Ask To Stay Closer To Home

Rural areas across Washington have asked people to recreate close to home, as the state begins to open up more businesses. Central Washington’s Kittitas County asked people to stay away over Memorial Day weekend, as it waited to hear back about moving on to Phase 2.

Photos circulating on social media showed cars lining streets of downtown Winthrop and along roads on the Interstate 90 corridor.

The concern is that people can bring the coronavirus into these small towns that have fewer medical resources already available.

“In our local valley, we have three hospitals. It’s very difficult. Our supplies are still not getting to us at a normal rate,” Okanogan County Emergency Management director Maurice Goodall said. “There’s still things backlogged. We’ve got enough that we’re protecting ourselves – we’ve got things stocked up. But it comes down to manpower and beds.”

(CLARIFICATION: Maurice Goodall’s reference to “three hospitals” was referring to Okanogan County more broadly. In fact, the Methow Valley does not have a hospital. The closest hospitals are in Omak and Brewster, both about an hour’s drive from the Twisp/Winthrop area.)

Those supplies could be strained if an outbreak occurs in the next few weeks or months, Goodall said.

As of May 22, Okanogan County reported 44 confirmed cases of COVID-19 and two deaths.

Goodall said the county will continue watching for any more spread of the virus. But, he said, it’s hard to enforce.

“What we ask is for people to think about others,” he said. “What I think that we’re seeing is we’ve got believers and non-believers. I think they’re in their corners. It’s very hard for us to enforce anything when somebody comes to town.”

He said with the photographs that are circulating, it’s difficult to always tell when someone isn’t socially distancing: Is that a family out together? Or is it a group of friends? But long lines are a giveaway that people aren’t staying close to home. He asks people to use common sense as they move about their lives, with respect for others.

“We’re asking that you wear a mask around other people. We’re not asking you to wear the mask when you’re out there by yourself or when you’re driving down the road,” Goodall said. (He said he always wears a mask when he’s in a store.)

“I don’t really care what you do, but when a negative outcome comes to someone else because of your actions, then that becomes a problem,” Goodall said.

Some people might have vacation homes in the area, he said. But Goodall doesn’t personally consider visiting a second home as “staying close to home.”

He said hotels and motels in Okanogan County are still restricted to only essential travelers. The Washington Department of Health has issued recommendations for accommodations, including closing lobby and seating areas and routinely cleaning handrails and elevator buttons.

Jennifer Tate said an Expedia report showed 38 percent of the site’s Methow Valley lodging was open this past weekend for reservations.

Tate, who also works for the Washington Tourism Alliance, said she’s heard some vacation rental homes are continuing to open their doors to out-of-town guests, especially in cities like Chelan. Tate said coworkers who live near vacation rental spots believed these guests were not essential travelers, as they headed to recreate in the lake.

“So the feelings in our communities, people are feeling very fragile and very disheartened. Just generally disappointed with how people are treating these rural communities that are incredibly vulnerable in terms of our healthcare infrastructure,” Tate said.

The Washington Tourism Alliance is developing a plan to help people “Explore Your Backyard.” The project will roll out soon, Tate said.

“We’re hoping that people can take a breath, take a step back and expand and explore your own backyards and maybe discover something new about your own area,” Tate said.

CORRECTION: The Washington Tourism Alliance is the correct name of the organization for which Jennifer Tate works.