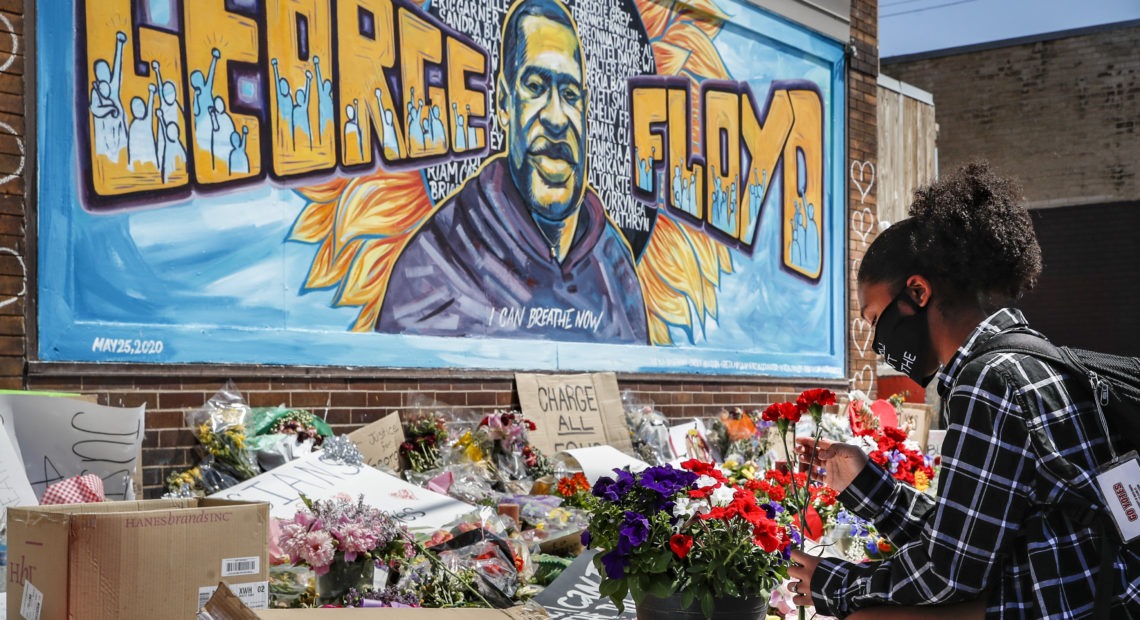 The death of a black man at the hands of white police officers has sparked days of civil unrest in the United States. Those sparks have landed in a tinderbox assembled over decades of economic inequality, now made worse by the coronavirus pandemic. 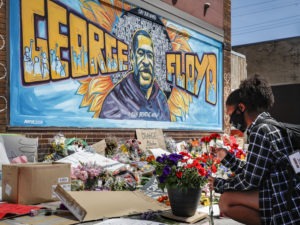 Malaysia Hammond places flowers at a memorial mural for George Floyd in Minneapolis on Sunday. Police brutality has sparked days of civil unrest. But the sparks have landed in a tinderbox built over decades of economic inequality, now exacerbated by the coronavirus pandemic. CREDIT: John Minchillo/AP

Minneapolis police officers initially confronted the man — George Floyd — on suspicion that he’d used a counterfeit $20 bill to buy cigarettes. The viral video of what followed captured an individual tragedy. But it’s set against a backdrop of poverty and discrimination that have long colored relations between law enforcement and the African American community.

African Americans are worse off than whites by almost every economic measure. And that divide has only deepened during the pandemic that’s sent the country into its worst economic downturn in generations.

A survey by the Federal Reserve last year found that even in good times, African Americans are less able to pay their monthly bills than whites or Latinos. That’s hardly surprising, since median income among African Americans is 41% lower than that of non-Hispanic whites.

Blacks are also 40% less likely to own their homes than whites — depriving many African American families of an opportunity to build wealth. The gap in homeownership is particularly stark in Minneapolis. A study by Zillow, the online real estate company, found black homeownership in the city lags more than 50 percentage points below the white rate. 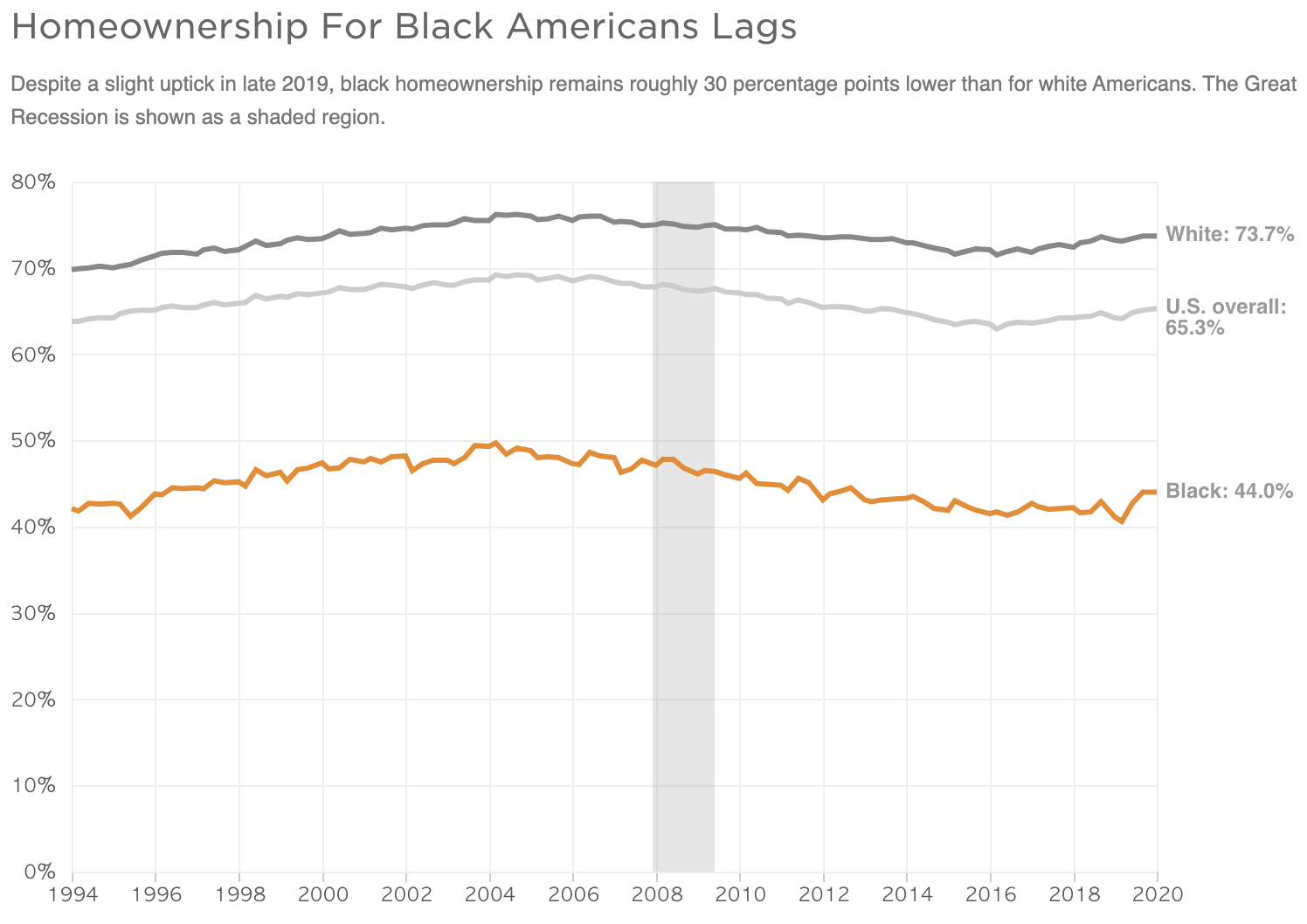 “It tells us that there’s racism baked in to the housing market,” said Andre Perry, a fellow at the Brookings Institution and author of Know Your Price: Valuing Black Lives and Property in America’s Black Cities.

Income disparity, segregation, and racial redlining have all contributed to low national levels of homeownership among African Americans. Although blacks made housing gains in the 1990s and early 2000s, that was reversed by the subprime mortgage crisis, which led to a wave of foreclosures.

Before the pandemic struck, African Americans were enjoying a strong job market. The black unemployment rate in February was 5.8% — near a 50-year low, though still higher than the white rate. Since then, unemployment for all racial groups has soared to double-digits. But the black-white gap has not noticeably worsened. 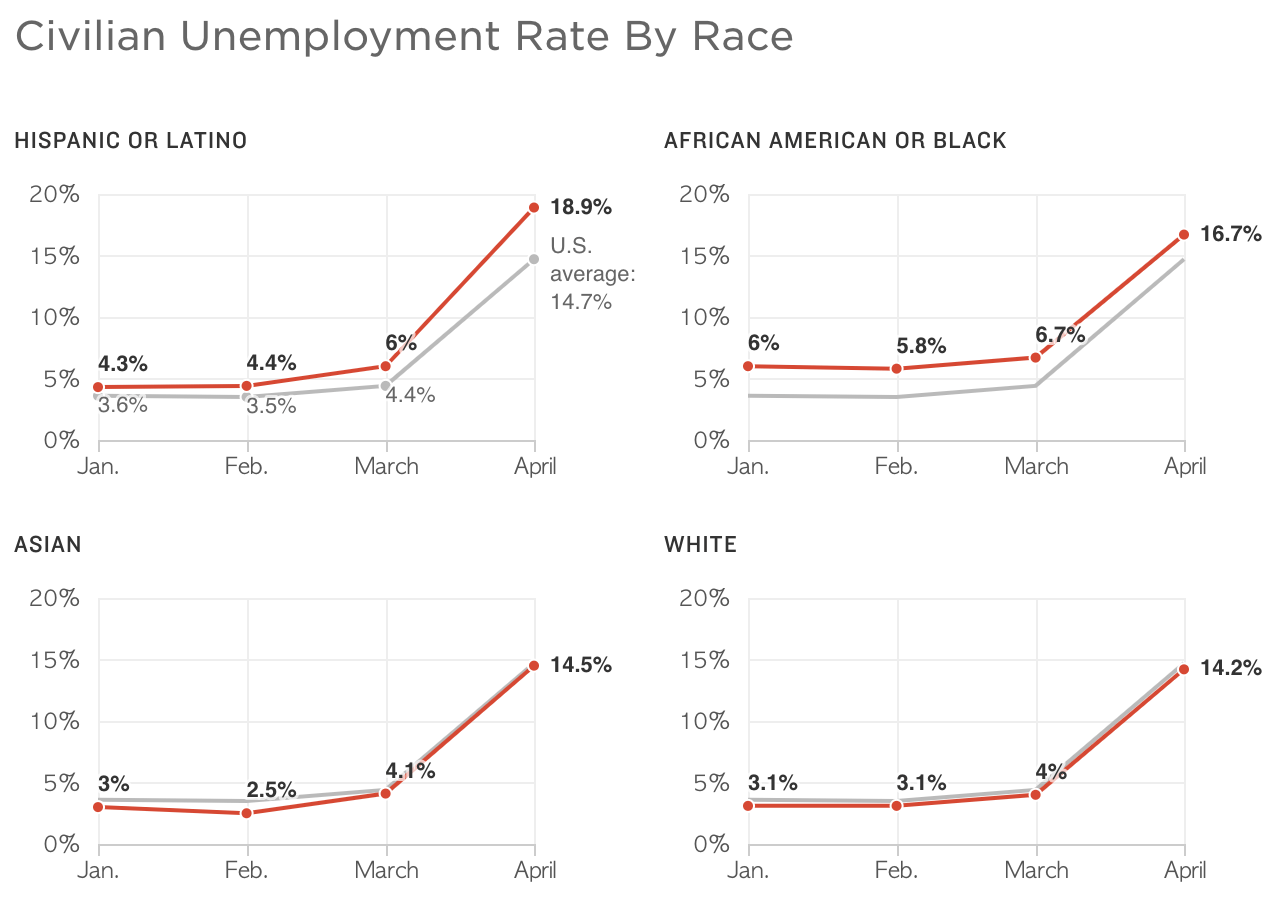 African Americans who are working, however, are more likely to hold jobs that put them at risk of infection. A survey by the Labor Department found that in 2018, less than 20% of African Americans held jobs they could do from home, compared to about 30% of whites.

Higher risk of on-the-job exposure to the coronavirus is compounded by African Americans’ higher rates of diabetes, heart disease and other conditions that are thought to contribute to more severe cases of COVID-19.

“There have been epidemics in the black community that have existed for generations before COVID,” Perry said. “COVID accentuated and exposed those epidemics.”

Just as the pandemic puts unequal health outcomes under a microscope, the video of George Floyd’s last moments illuminates the frustration brought about by generations of economic hardship.

“That action really symbolized the knee on the neck of black homeowners and renters,” Perry said. “It represents the employers who don’t provide the kind of benefits and wages that will lift African American communities.”

He suggested the demonstrations taking place across the country, five months before a national election, provide an opportunity for candidates to spell out how they would deal with these challenges.

“If we don’t address the structural inequality,” Perry said, “we’ll be right back in the same place when the next inevitable crisis hits.”