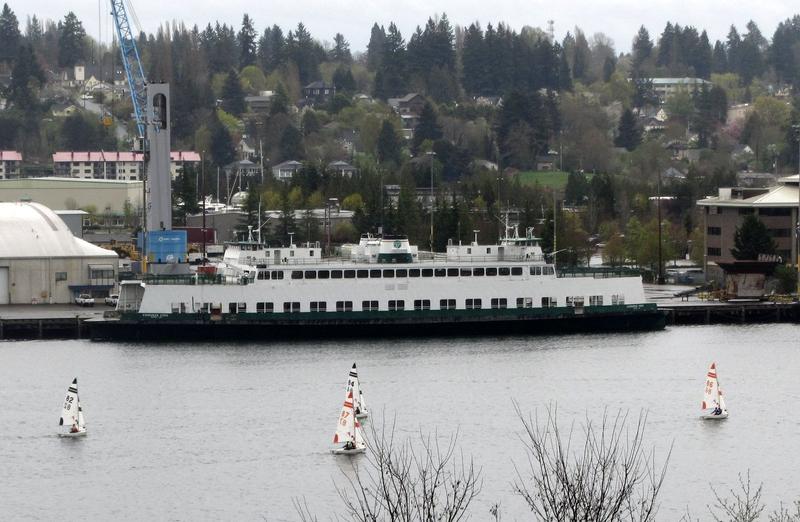 A former state ferry now moored on the Olympia waterfront may be headed for auction for the third time in about three years, this time to remedy months of unpaid port bills. The venerable car ferry Evergreen State was declared “abandoned” by the Port of Olympia on Friday, to the dismay of its owner.

Ferryboat owner Gregory Jones said the alleged abandonment of his big vessel “is news to me.” In a telephone interview, Jones said he is in talks with one or two parties to sell the aging car ferry.

“If it doesn’t sell, we will move it,” he said. “It’s already been a challenging experience. I just wish the Port of Olympia wouldn’t throw mud in the water.”

The Florida businessman made the winning bid back in 2017 when Washington State Ferries auctioned the decommissioned vessel. Jones paid $300,000 for the white and green, 310-foot ferry. He moved it to the Port of Olympia marine terminal in April 2018 for what the port thought would be a short layover before a journey through the Panama Canal to a new home along the U.S. Gulf Coast.

“It’s not the best use of the working waterfront,” said Port of Olympia spokesperson Jennie Foglia-Jones. “So we would be looking for it not to be long term.”

The port seized the ferry to secure a debt that now totals nearly $32,000. Foglia-Jones said the last payment the port received from the out-of-state owner came in January. She said the port provided a 90-day notice of seizure in late March, which dictated the June 25 deadline to settle up or risk losing the boat at an auction.

The port’s legal counsel expressed additional concern based on the belief the vessel owner has not maintained insurance since approximately February.

Port officials are in the process of scheduling a special port commission meeting to authorize a public sale to the highest and best bidder. An auction would probably take place in late July because the port has to give the previous owner 20 days advance notice.

Gregory Jones originally planned to move the ferry to the Caribbean to use on an inter-island service in Grenada. The entrepreneur soon switched gears to explore converting the ferry into a floating restaurant or an event center wrapped around a TV studio on the Pensacola waterfront.

But Jones said in a January interview from the Florida Panhandle that his business priorities shifted and by the beginning of this year he had run out of “hours in the day” to make something happen. So, he listed the ferry on the eBay auction platform.

Bidding in the January 2020 eBay auction topped out at $205,100. Winning bidder Nathan Altman of Los Angeles told The Olympian that he planned to turn the ferry into a mobile, floating art studio. But the sale soon fell through after Altman asked for documentation about the vessel, including proof of ownership, which he said Jones would not provide in advance of payment.

While in state service, the Evergreen State had a capacity for 87 cars and a maximum of 854 passengers. The diesel-electric, double-ender was custom built for Washington State Ferries in 1954 and extensively rebuilt in 1988. Its drive motors were surplus from a World War II destroyer escort.

The ferry was the first of three of this design to be delivered to the nation’s biggest ferry system. The last one in the series, the Tillikum, is still in service and has the distinction of being the oldest vessel in the current Washington state fleet. The Evergreen State sailed on many routes, although it may be most fondly remembered by San Juan Islands commuters. 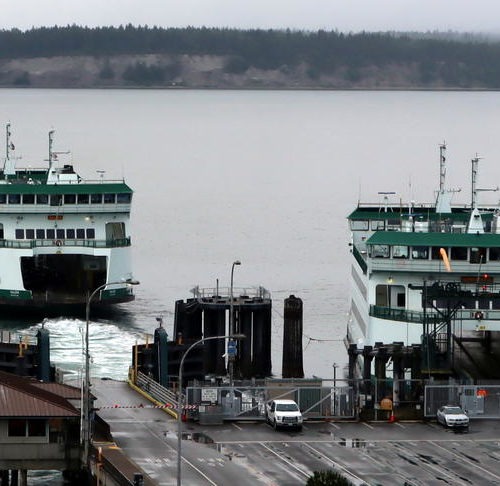 Summer officially begins on Saturday, but it still feels like winter if you study the sailing schedule of Washington State Ferries. With ridership depressed by the ongoing pandemic, the nation’s biggest ferry system is sticking to a reduced schedule through what would normally be its busiest season. Continue Reading Washington State Ferries To Stay On Reduced Schedule As Summer Begins 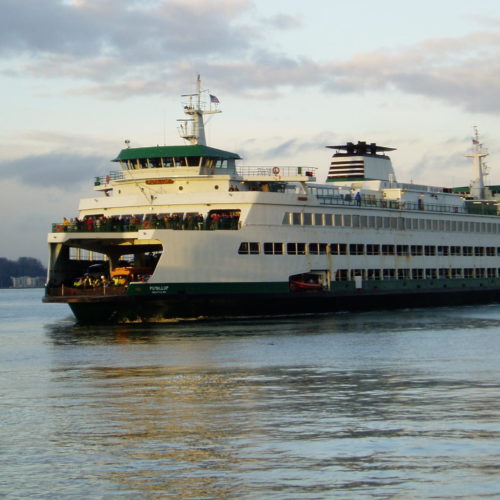 A launch, a thud, a trail of blood. NOAA believes it was a juvenile humpback whale that a Bainbridge Island-bound ferry hit in Elliot Bay a few minutes after its 8:15 p.m. departure Tuesday night. Continue Reading Whale Strikes In Puget Sound Could Get More Common As Humpback Numbers Grow