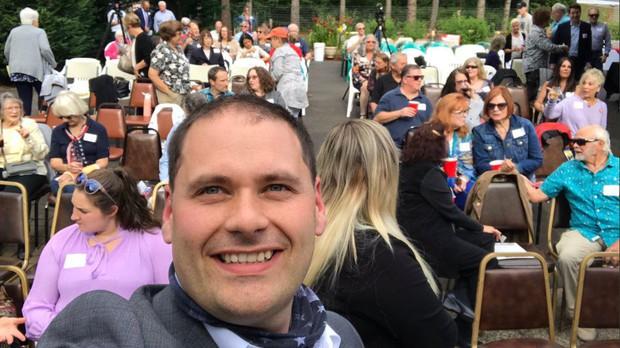 BY AUSTIN JENKINS ANY TROY BRYNELSON

A soiree outside Camas last week for Republican gubernatorial candidates in Washington was held in defiance of state public health laws while coronavirus cases spike across the state.

“If nobody gets sick because they were here, that speaks volumes about all of the fear-mongering going on,” Pike told OPB and Northwest News Network.

The event is among other recent Republican-led events held in Southwest Washington that seem to be explicitly defying public health protocols. Clark and Cowlitz counties both remain in Washington’s second phase of reopening, which permits gatherings of no more than five people.

Gov. Jay Inslee recently paused reopening across the state amid rising cases and hospitalizations. On Thursday, he tightened restrictions further by limiting gatherings under phase three to 10 people.

“Enforcement is at the discretion of local authorities following guidance issued by the state, which begins with education and soliciting voluntary compliance,” he said.

Pike agreed her event defied orders, but disagreed it was a law enforcement issue. She said a deputy with the Clark County Sheriff’s Office was on scene working security.

“He didn’t arrest me when he was here,” Pike said jokingly.

Sheriff Chuck Atkins confirmed the deputy was present on “extra duty.” Deputies are often hired for special events to do traffic control, for example, he said. He said he didn’t realize he authorized this particular job until reporters raised questions.

“I put two-and-two together and realize we very well could have had a deputy out there directing traffic, making sure cars didn’t get piled up on the street, that kind of thing,” he said.

Atkins said he had “no idea” if the deputy enforced any of the state’s orders to mitigate COVID-19 spread.

Pike, a former three-term Republican state representative from Clark County, said she was unconcerned about hosting the unauthorized event. She said it was designed to spread the word about Republican candidates, describing the shutdown as a tactic to suppress conservatives.

“It just felt like we had to do this,” she said, noting it took place outdoors where transmission is less likely. “Are we going to be patriots and stand up for transparency and do what is right? To me, we had to do it.”

Clark County has seen a steady climb in cases. Hospitalizations are increasing, as well.

The candidates’ forum was initially planned for spring before the pandemic hit, Pike said. As the state shut down, she said they postponed to July in hopes that the pandemic would be over. At the event, she said it was a “long road” due to the “Wuhan shutdowns ordered by ‘Wrong Way Jay.’”

Hand sanitizer was present, she noted, and the invitation mentioned mask use and social distancing. But, at the event itself, Pike said few wore masks and people sat close. Reynolds, a Republican candidate for state Senate, sang the national anthem to the crowd.

“We had them spread out about three feet apart. I mean — that was enough,” Pike said. “They could have not sat down if they felt uncomfortable.”

Candidates who spoke to reporters for this article said they felt comfortable. Eyman did not answer specific questions about whether he was worried about the virus but said his drive to Clark County was more dangerous.

“I was more likely to get into a car accident on the way down there than I was to (contract the virus),” he said. “We all take risks in life. I don’t want to require 7 million people to all wear bubble wrap all the time.”

“There’s been thousands of people gathering, protesting, and not a word from anyone within our state to say if they were going against the rules,” he said. “So I think cherry-picking one event and ignoring others is an unfortunate situation but that’s the current situation we’re in in Washington state.”

Reynolds, a Vancouver police officer running for state Senate, could not be reached for comment. His campaign coordinator, Kiki Bittner, said Reynolds sat apart from others and wore a mask until he sang. Reynolds also held a socially distanced sign-waving event over the weekend, she said.

Events without masks have popped up in Southwest Washington. Last weekend in Pacific County, Republican candidates for local and statewide offices participated in a mask-less “MAGA Meetup,” reported the Chinook Observer.

Likewise, last month, Eyman, Fortunato and Culp all attended an indoor candidate forum in Bellingham, Washington. That event did include some masks and spaced attendees apart.

Pike said she plans to host more events in the lead up to the election. She laughed that she’s “doubling down.” Her plans are an upcoming arts festival at her farm, followed sometime soon by another political event supporting Eyman’s campaign.