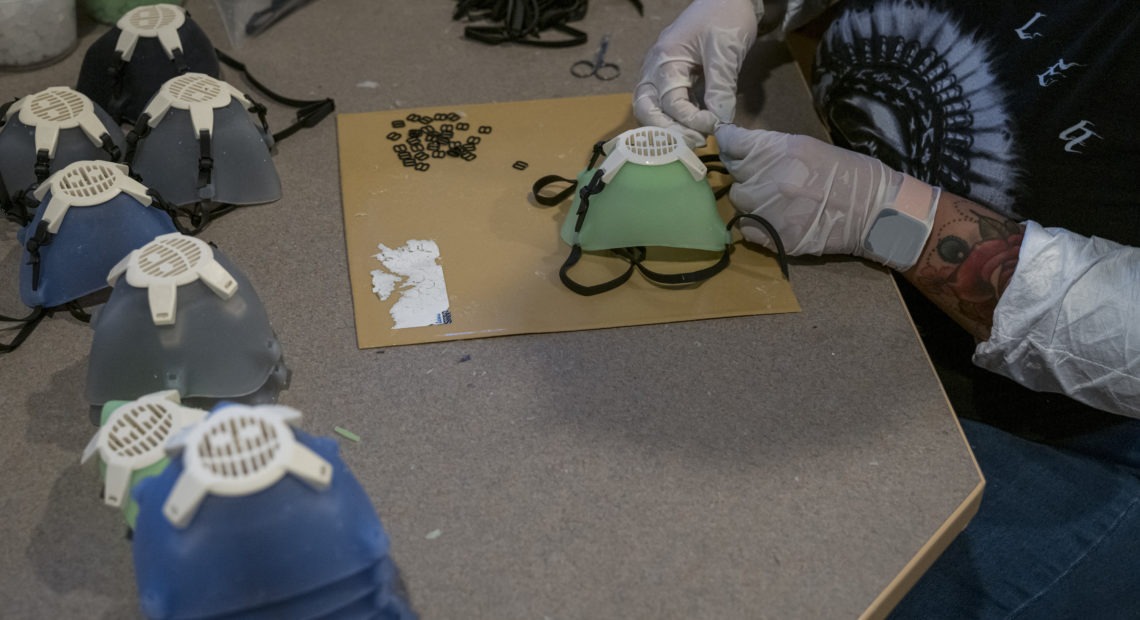 At the beginning of the coronavirus pandemic, there were lots of stories about scrappy manufacturers promising to revamp their factories to start making personal protective equipment in the U.S.

Back in the spring, fuel-cell maker Adaptive Energy retooled part of its factory in Ann Arbor, Mich., to make plastic face shields. Now, 100,000 finished shields are piling up in cardboard boxes on the factory floor — unsold.

“We jumped in head first,” said Ranvir Gujral, the company’s principal owner. He added ruefully: “We weren’t the only ones with a brilliant idea of getting our folks back to work and trying to help and manufacture PPE.” 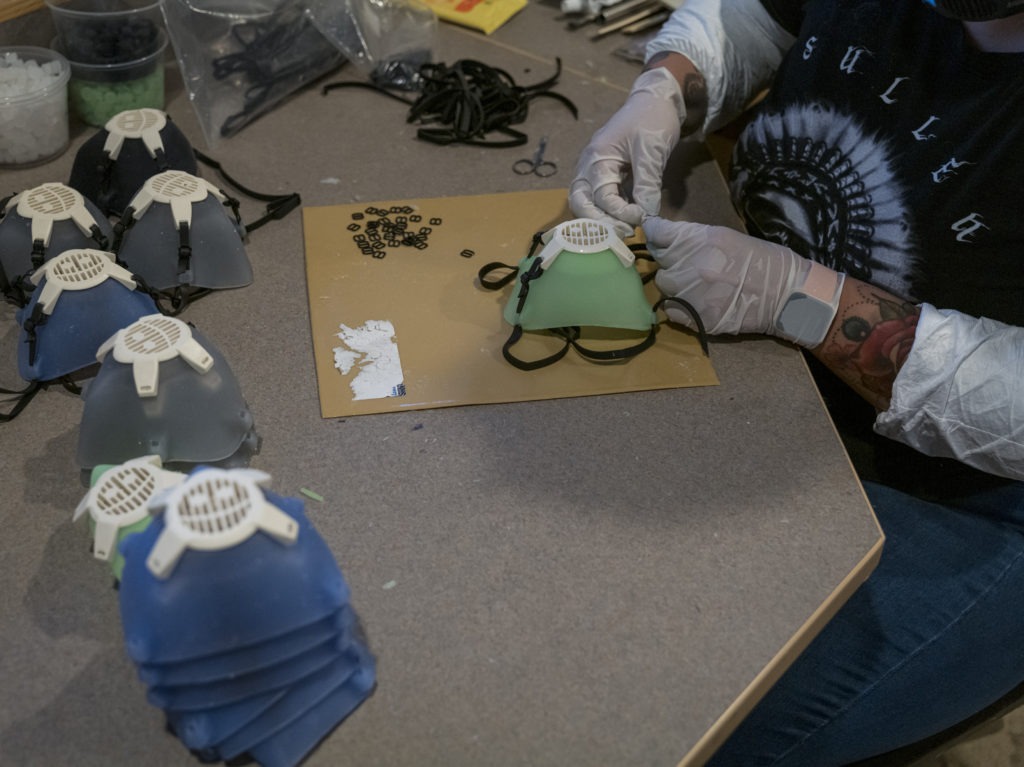 Earlier this year, Monster City Studios, a company that normally makes amusement park and movie props, pivoted to manufacturing MCS face shields with forehead protection. It was one of many small companies to make the switch. CREDIT: David Paul Morris/Bloomberg via Getty Images

Since the coronavirus pandemic began, President Trump and industry officials have talked a lot about the need to ramp up domestic manufacturing of critical protective gear. But six months on, there are still shortages of all kinds of PPE, like N95 respirator masks, while face shields are easy to find.

Lack of a coherent national plan

The disconnect can be traced, in part, to the lack of a coherent national plan.

When Gujral and other domestic manufacturers saw an opportunity to help protect frontline workers — and to keep their own employees working, many of them shifted gears to make face shields and hand sanitizer, which are relatively simple to produce.

But fewer shifted to making N95 masks, which are far more complicated, and they’re in short supply. Nurses and doctors are re-using masks over and over again. Some small medical practices can’t even find supplies they can afford.

“We’ve opened up factories. We’ve had tremendous success with face masks and with shields,” Trump said during a press briefing at the White House last week.

The market is, in fact, glutted with face shields. But the U.S. is still far short of the 3.5 billion masks that public health officials say are needed this year.

The White House narrative is that the pandemic revealed the danger of relying too much on Chinese suppliers, and that the U.S. has ramped up domestic production significantly, making those early shortages a thing of the past.

“We are taking our business out of China. We are bringing it home. We want our business to come home,” Trump said at the Republican National Convention.

But in reality, U.S. manufacturers worry the administration is fumbling a chance to bring the PPE industry back home.

“We’re not seeing that happen. In fact, we’re behind in manufacturing jobs. We’re importing more PPEs than ever,” said Scott Paul, president of the Alliance for American Manufacturing.

‘This administration has really had a big firm focus’

The White House worked with some big companies, including 3M and Honeywell, to ramp up domestic production of respirator masks. But that was relatively easy for them: 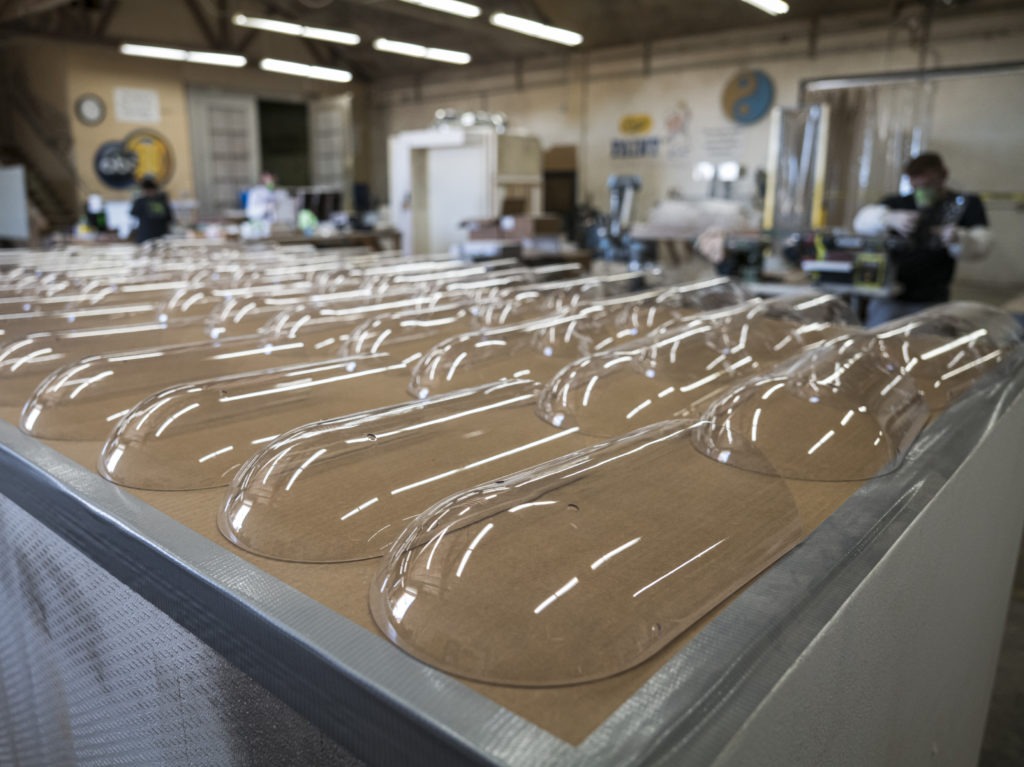 Plastic face shields sit on a table at Mask & Shield, a division of Monster City Studios, in Fresno, Calif., on May 27. CREDIT: David Paul Morris/Bloomberg via Getty Images

3M developed the first N95 mask, so it already has factories and established customers.

Even so, 3M and Honeywell haven’t been able to make enough masks as the pandemic wore on and demand only increased.

But the federal government has no plan to help small- and mid-sized manufacturers move into PPE.

“This administration has really had a big firm focus,” said Gary Gereffi, a professor at Duke University and the founding director of the Duke Global Value Chains Center.

“We’ve never really fully dealt with the ongoing demand for the basic items — the face masks and the gloves and the gowns,” Gereffi said, partly because the administration has been more focused on discovering a vaccine that could bring the coronavirus outbreak under control.

As a result, Gereffi said: “We didn’t have any agency in the government that knew which companies were producing these different products.”

That leaves manufacturers like Ranvir Gujral, the factory owner in Michigan, to figure it out on their own. Gujral still wants to help in the pandemic. He’s thinking about retooling his factory in Michigan again, this time to make N95 masks.

What he’s missing is some certainty that his investment will pay off. Gujral’s factory wouldn’t be ready to start cranking out masks until the spring.

“Are we going to still have demand? Are these customers still going to come to us?,” he asked. “We don’t want to be left holding the bag.”

“This is a big enough move to put us out of business if it doesn’t go well,” he said. “It’s a bet-the-company move.”

It’s the same conundrum facing all sorts of industries. Things are made more cheaply overseas, especially in China. So are customers willing to pay a little more for masks that are made in the USA? Or other scarce items, like protective gloves or gowns?

“I hear that from across my industry,” said Kimberly Glas, the president of the National Council of Textile Organizations, an industry trade association in Washington. “People aren’t going to make an investment realizing that there’s not a customer at the other end.”

Even as the Trump administration downplays the PPE shortages, it has taken steps to try to shore up U.S. manufacturing of drugs and medical supplies. The president signed an executive order last month requiring federal agencies to buy American-made when possible.

It’s a good step, said Glas, who worked at the U.S. Commerce Department during the Obama administration. But she says it will take more than that — a real strategic federal plan, or tax incentives — to convince domestic manufacturers to invest.

“My fear is a year from now, we will see these supply chains that were heavily dominated in China go back to China fully,” Glas said.

And the U.S. will have squandered a chance to bring jobs back onshore, and make America self-sufficient when it comes to protecting against the coronavirus.