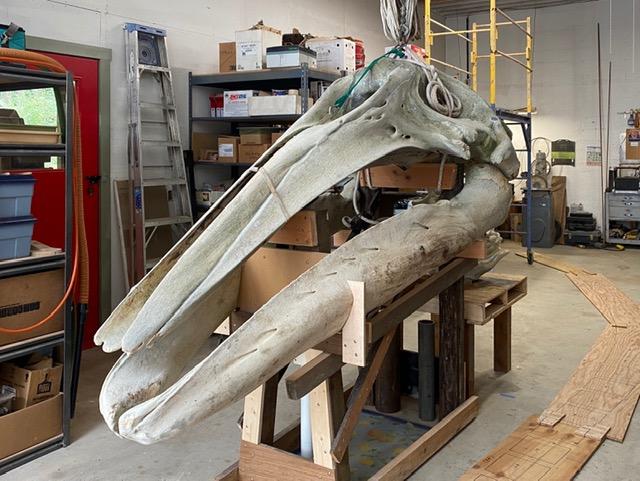 NOTE: The article that follows contains a picture of a dead whale washed ashore that some people may find distressing.

Last year, a couple who lives near Port Townsend, Washington, agreed to let the federal government drop off a dead gray whale to decompose on their semi-isolated beach. Now, the couple has a permit to keep the whale skeleton and will soon assemble the most amazing yard art.

You might remember last year how there was an unusual die-off of gray whales. Dozens washed ashore showing signs of starvation during the annual migration along the Pacific Coast.

Port Hadlock-area waterfront homeowners Mario Rivera and Stefanie Worwag volunteered their private beach to let a dead whale rot there so it wouldn’t stink up a more populated area. In June 2019, wildlife biologists towed an emaciated, adult gray whale carcass to their place on the shore of North Puget Sound.

“After a couple of weeks, the smell wasn’t too bad,” Rivera recalled in an interview Tuesday. “Unless you got really up close to it.”

Regular applications of lime expedited the decomposition process, he said. Maggots and other scavengers did much of the dirty work.

Now, the couple gets their reward. Rivera said the goal is to reassemble the bones of the deceased whale, which they’ve nicknamed Gunther, similar to a natural history museum display. It will become yard art unlike anything sold in any store.

“This is to show the grandeur yet fragility of a gray whale since so many died last year,” Rivera explained. “This is a tribute to them.”

The couple tackled the laborious process of scraping, cleaning and painting the bones themselves.

“It’s almost all clean,” said Rivera about the current status of a project that will probably stretch another year to completion. 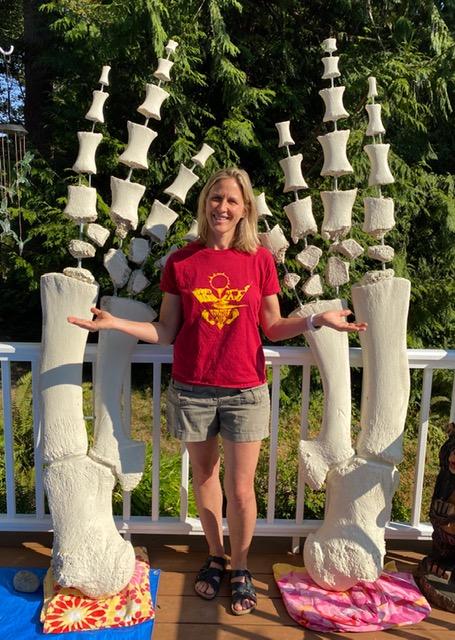 Stefanie Worwag poses with the reassembled flippers of a previously beached gray whale that washed ashore near Port Townsend in 2019. CREDIT Mario Rivera

They turned to retired marine shipwright Ric Brenden and artist Les Schnick for assistance with crafting the metal rods to connect and support the huge skull and heavy vertebrae on upright poles.

Rivera said the full whale skeleton will span 42 feet across his back yard. It will not be on public view for liability reasons.

Rivera is a retired police officer and Air Force veteran. Worwag is a veterinarian and assisted on the necropsy of the gray whale that was towed to their beach. The couple was alerted to the opportunity to have a whale decompose on their property through volunteering with the Port Townsend Marine Science Center, an organization involved in the regional marine mammal stranding network.

Thankfully, last year’s spate of dead gray whales was not repeated during this spring’s northbound migration. NOAA Fisheries, the lead U.S. agency responsible for whale conservation, is waiting to declare the gray whale die-off as over. But the signs are promising.

“The strandings appear to have slowed sharply this year,” said Michael Milstein, a NOAA Fisheries spokesperson in Portland.

The peak season for gray whales to wash up dead along the U.S. West Coast is during the spring northbound migration from March to July. The agency has tallied 12 gray whales found dead on Washington state beaches this year, compared to 34 last year. Oregon’s tally is three this year compared to six last year. California has recorded 18 gray whale deaths so far in 2020 versus 35 last year.

NOAA assembled a diverse group of scientists from different institutions to investigate possible causes for what it termed an “unusual mortality event.” 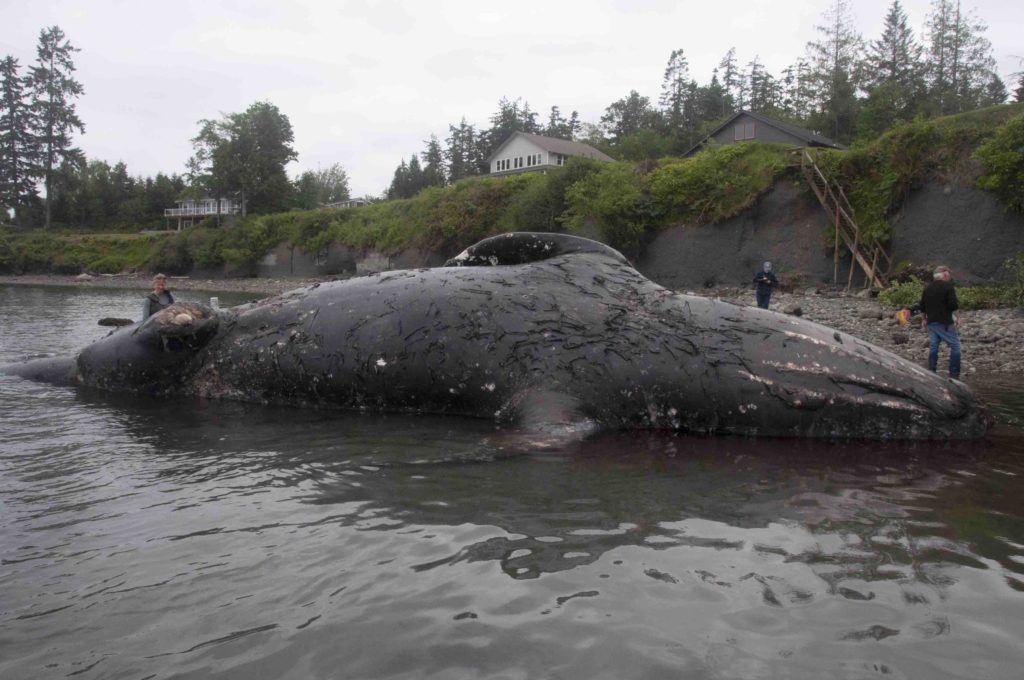 This 40-foot gray whale drifted ashore north of Port Ludlow, Washington, on May 28, 2019, before being towed to a more isolated beach at the invitation of the landowners there.
CREDIT: Mario Rivera

One of the whale experts on the team, Cascadia Research senior biologist John Calambokidis, detailed in an earlier interview the three prongs that researchers are pursuing. One group is looking into whether something is wrong in the Arctic food chain. Another scientific committee is studying gray whale population dynamics. Other specialists will try to rule out disease or toxins.

A leading theory is that starving whales could be a function of an increasing gray whale population intersecting with a downturn in their prey in the Arctic. These gray whales overwinter in the warm waters of Baja California and then migrate to summer feeding grounds in Alaskan waters. The annual roundtrip of around 10,000 miles is among the longest migrations of any mammal on earth. 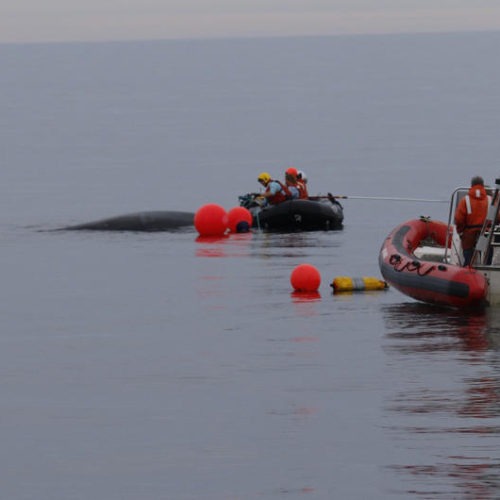 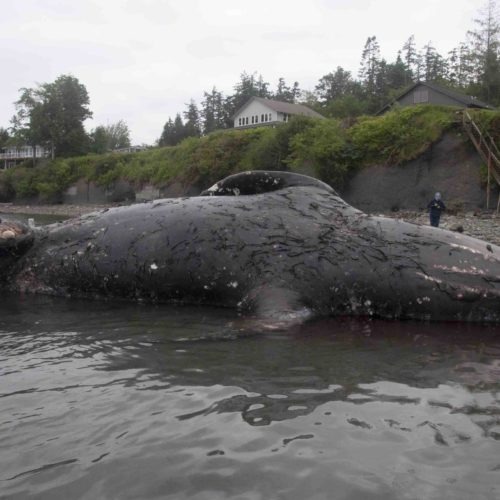 Mind If We Drop Off A Dead Whale On Your Beach? Asking For A friend.

The tally of dead gray whales washing up on Pacific Northwest beaches during this year’s northbound migration keeps going up. That’s prompting an unusual request for volunteers from a federal agency. Continue Reading Mind If We Drop Off A Dead Whale On Your Beach? Asking For A friend. 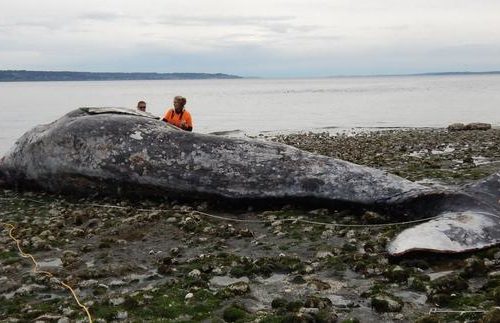