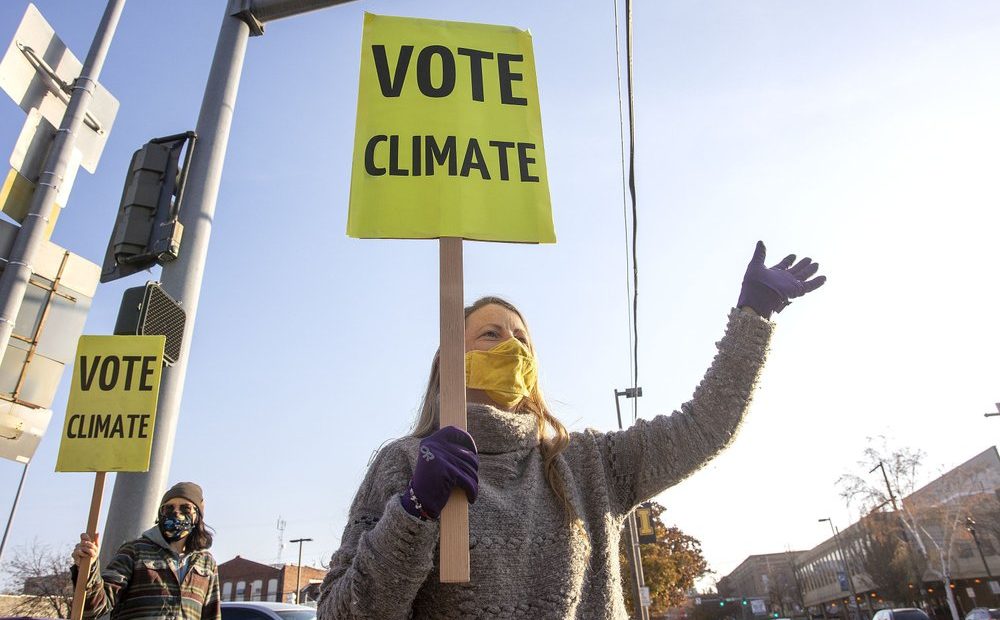 The United States on Wednesday formally left the Paris Agreement, a global pact it helped forge five years ago to avert the threat of catastrophic climate change.

The move, long threatened by President Donald Trump and triggered by his administration a year ago, further isolates Washington, D.C., in the world but has no immediate impact on international efforts to curb global warming.

Still, the U.N. agency that oversees the treaty, France as the host of the 2015 Paris talks and three countries currently chairing the body that organizes them — Chile, Britain and Italy — issued a joint statement expressing regret at the U.S. withdrawal.

“There is no greater responsibility than protecting our planet and people from the threat of climate change,” the statement said. “The science is clear that we must urgently scale up action and work together to reduce the impacts of global warming and to ensure a greener, more resilient future for us all. The Paris Agreement provides the right framework to achieve this.” 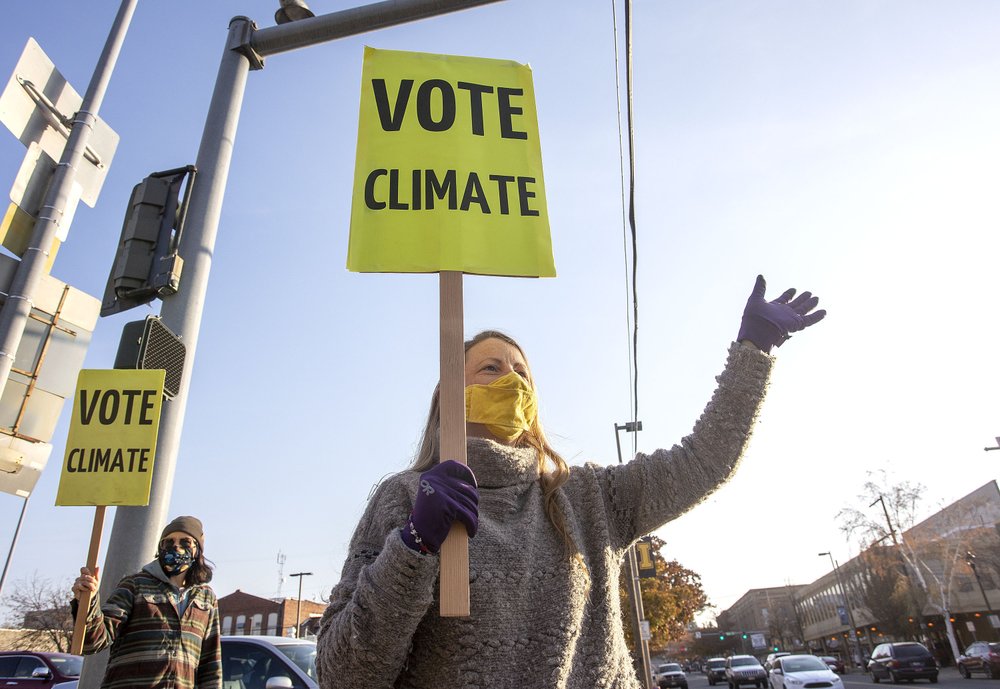 “We remain committed to working with all U.S. stakeholders and partners around the world to accelerate climate action, and with all signatories to ensure the full implementation of the Paris Agreement,” they added.

The next planned round of U.N. climate talks takes place in Glasgow, Scotland, in 2021. At present, 189 countries have ratified the accord, which aims to keep the increase in average temperatures worldwide “well below” 2 degrees Celsius (3.6 degrees Fahrenheit), ideally no more than 1.5C (2.7 F), compared to pre-industrial levels. A further six countries have signed, but not ratified the pact.

Scientists say that any rise beyond 2 degrees Celsius could have a devastating impact on large parts of the world, raising sea levels, stoking tropical storms and worsening droughts and floods.

“Having the U.S. pull out of Paris is likely to reduce efforts to mitigate, and therefore increase the number of people who are put into a life-or-death situation because of the impacts of climate change: this is clear from the science,” said Cornell University climate scientist Natalie Mahowald, a co-author of U.N. science reports on global warming.

The Paris accord requires countries to set their own voluntary targets for reducing greenhouse gases such as carbon dioxide, and to steadily increase those goals every few years. The only binding requirement is that nations have to accurately report on their efforts.

“The beauty of this system is that nobody can claim they were bullied into some sort of plan,” said Nigel Purvis, a former U.S. climate negotiator in the administrations of Presidents Bill Clinton and George W. Bush. “They’re not negotiated. They’re accepted.”

The United States is the world’s second biggest emitter after China of heat-trapping gases such as carbon dioxide and its contribution to cutting emissions is seen as important, but it’s not alone in the effort. In recent weeks, China, Japan and South Korea have joined the European Union and several other countries in setting national deadlines to stop pumping more greenhouse gases into the atmosphere than can be removed from the air with trees and other methods. 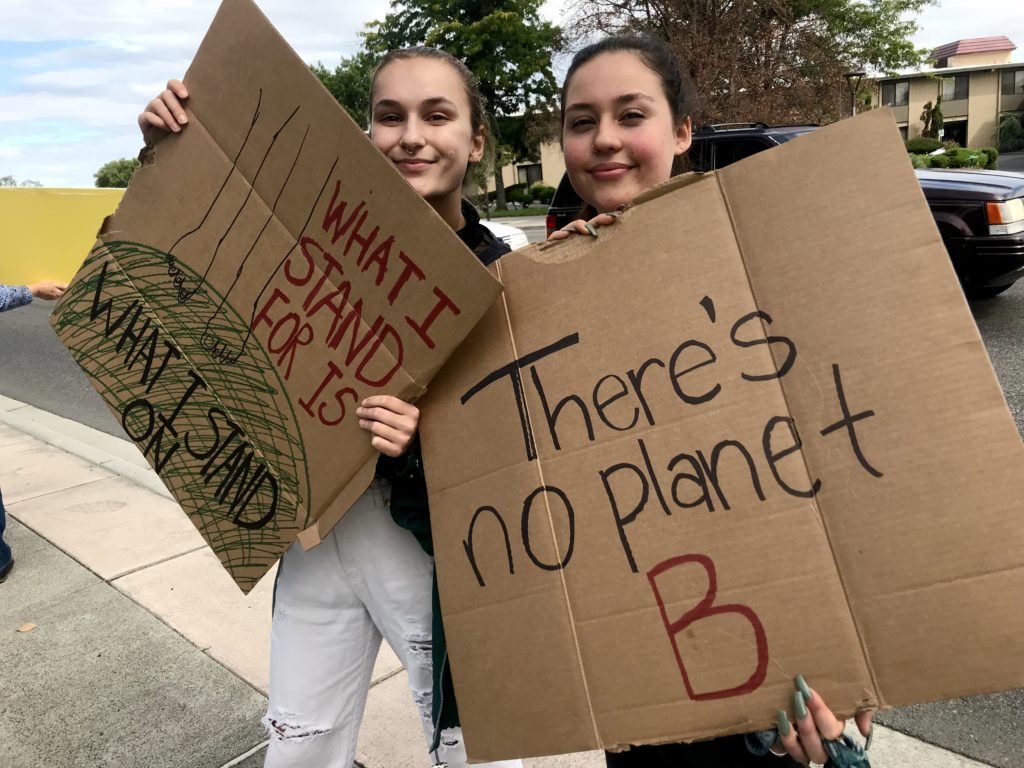 File photo. Alexandra Sasha Grieb and Kyleigh Dabler, both 19, from Kennewick, Washington, waved at passing cars driving by Richland’s John Dam Plaza during a 2019 climate action protest. Grieb said it will be up to younger generations to fight climate change now with their votes. “The earth will survive climate change. Humans won’t,” she said. CREDIT: Courtney Flatt/NWPB

Democratic presidential candidate Joe Biden has said he favors signing the U.S. back up to the Paris accord. Because it was set up as an executive agreement, not a treaty, congressional approval is not required, Purvis said.

White House spokesman Judd Deere said the accord “shackles economies and has done nothing to reduce greenhouse gas emissions.”

Should the U.S. continue to remain outside the pact, it’s likely that other countries will try to impose tariffs on U.S. imports — paving the way for fresh trade wars.

The European Union is currently debating a package of proposals, known as the EU New Green Deal, that would include a so-called carbon border adjustment, aimed at preventing companies from dodging emissions reduction efforts in the 27-nation bloc by manufacturing goods in places without stringent measures.

Germany, which currently holds the EU’s rotating presidency, said it was important for Europe to lead by example now that the United States had left the pact. German government spokesman Steffen Seibert noted Wednesday that the EU aims to became the first climate neutral continent by 2050.

Mahowald said she worries that with the U.S. out, China which initially agreed to emission curbs in a two-nation agreement with the Obama administrations, and other nations may decide they don’t have to do as much to cut carbon pollution.

While the Trump administration has shunned federal measures to cut emissions, Seibert noted that U.S. states, cities and businesses have pressed ahead with their own efforts.

In addition to condemnation from abroad, environmental and public health groups in the United States criticized Wednesday’s withdrawal.