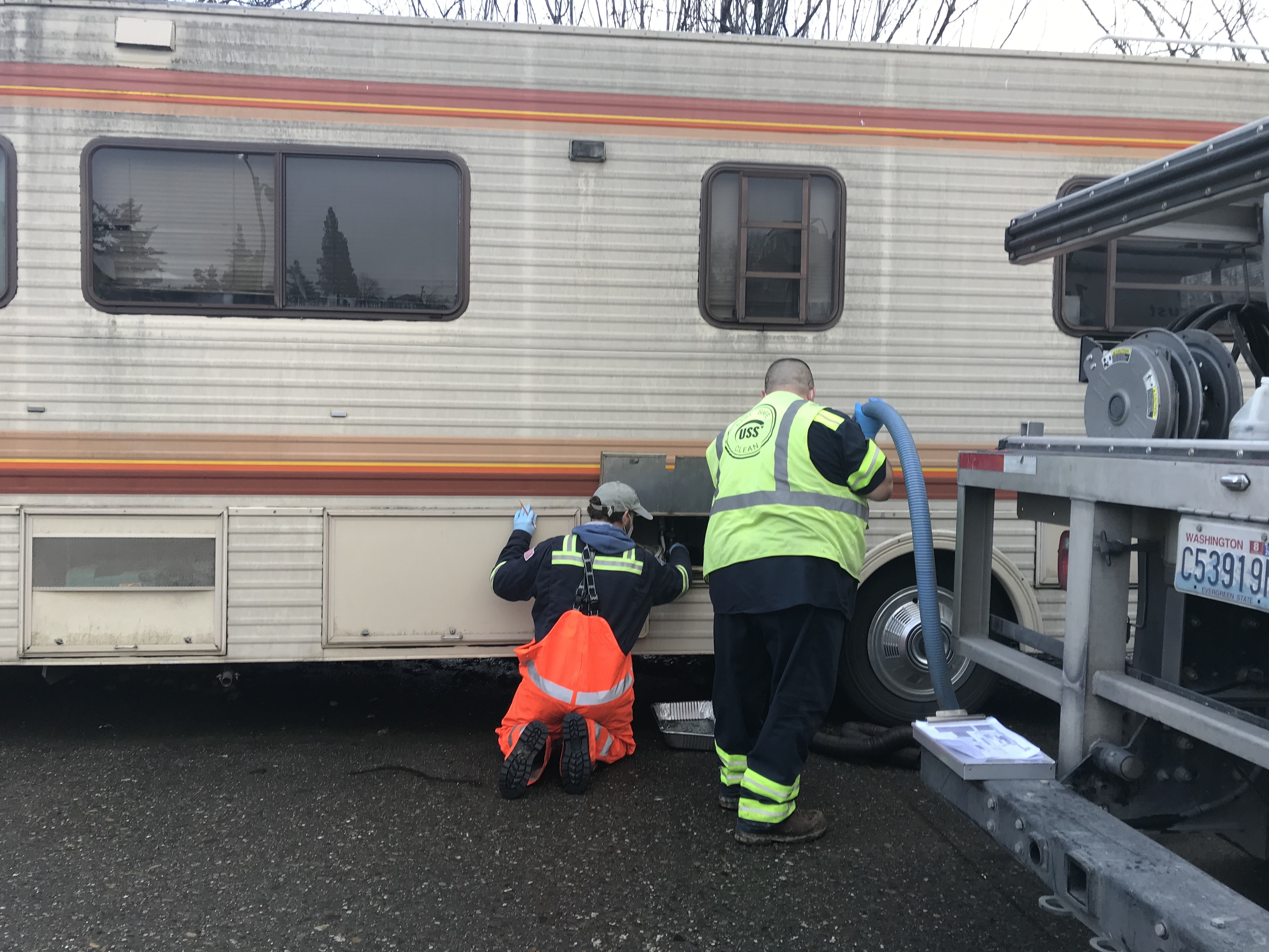 In Seattle, People Living In Their RVs Get Help From City Waste Pumper

Chris Wilkerson used to get phone calls in the middle of the night about poop.

Wilkerson, who was part of Seattle Public Utilities’ Spill Response Team, says the calls were usually from the public. Typically, he says, the caller would tell him, “Hey, there’s a puddle of poo” in the street. And many times, the excrement would be coming from a recreational vehicle. 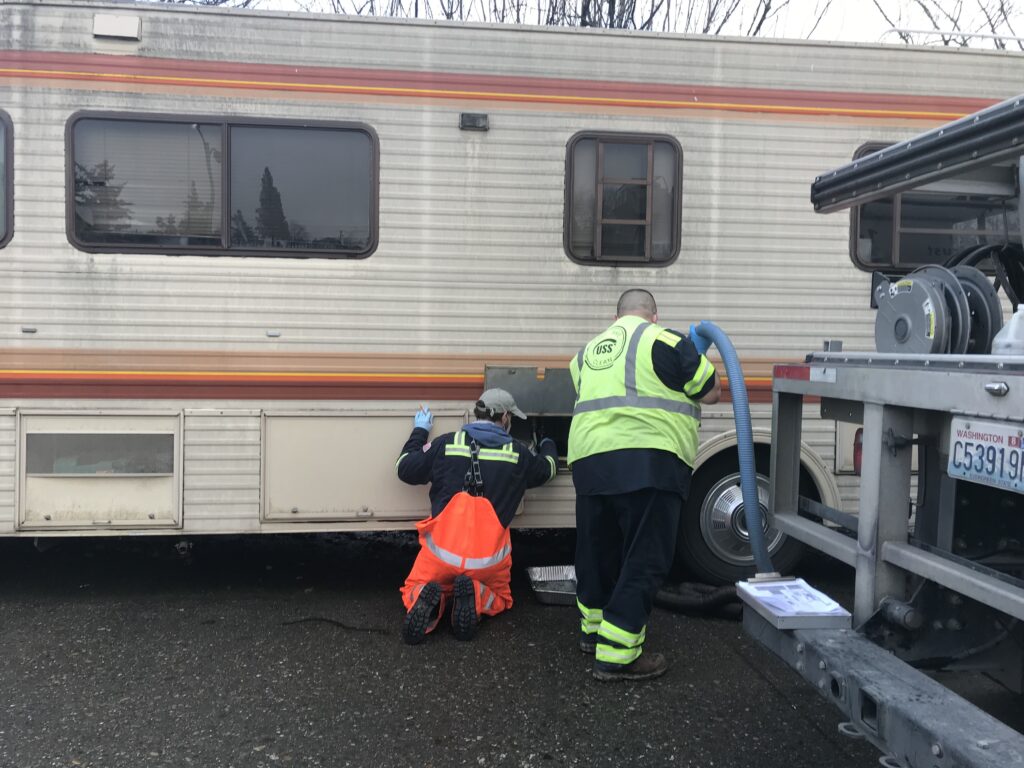 With the help of a contractor, Chris Wilkerson makes monthly visits to RVs and motor homes around the city that don’t have access to dumping stations. CREDIT: Erin Slomski-Pritz/NPR

“We saw more people decline into homelessness quicker,” says Bill Kirlin-Hackett, who directs the Scofflaw Mitigation Team, a city-funded program that helps people living in RVs avoid losing their vehicles for violating city ordinances. “And if you own a vehicle, the quick response is to live in it, so a lot of people new to homelessness were entering vehicles.”

Wilkerson’s team realized that many of the waste spills were unintentional. Many of the RVs were dilapidated and not fit for habitation, and there was no public dump site in the city of Seattle.

Wilkerson says his team initially proposed the construction of a new dump station geared toward RV dwellers. But in January, Seattle Public Utilities piloted what Wilkerson says has turned out to be a more effective response: a mobile service that goes directly to the source of the problem. Wilkerson is now coordinator of the RV Wastewater Pilot Program.

He visits people living in RVs, trucks and automobiles, across the city and offers to pump out their waste for free.

A group of volunteers from a local charity goes ahead with food and medical supplies and ask the RV occupants if they need their tanks emptied. Volunteer Mary Jo Shannon is board president of the charity, St. Vincent de Paul. “These people are wonderful,” says Shannon of the people living in vehicles. “And they’re human beings that deserve the respect and dignity that all of us do.”

RV dweller John Hendrix has been using Wilkerson’s service for about four months. 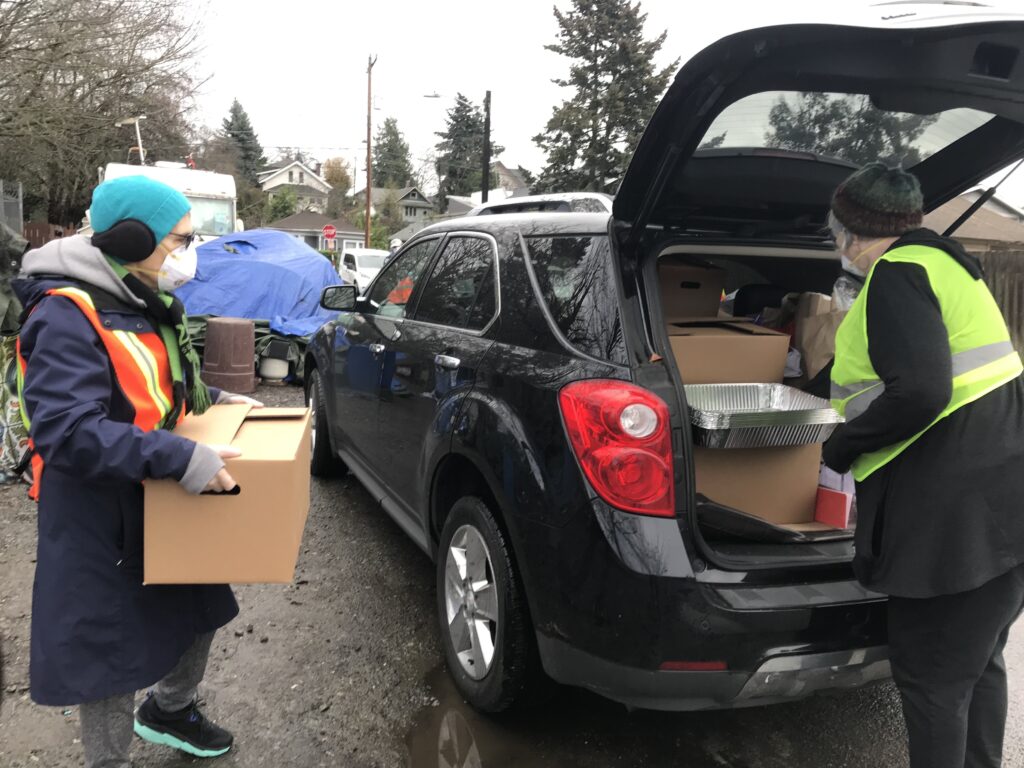 The waste-pumping program is carried out in coordination with volunteers from the local charity, St. Vincent de Paul, who bring along food and medical supplies. CREDIT: Erin Slomski-Pritz/NPR

When Wilkerson visited him last, he asked whether Hendrix had dumped his waste anywhere since the previous monthly pumping.

Hendrix concedes though that the monthly visits aren’t enough. After about three weeks, he says, he uses the bathroom in a nearby medical clinic or sometimes goes in the park.

Last year, before the waste removal program was created, there were more than a 100 illegal spills from RVs, according to Wilkerson. He says that number has fallen by 75 percent so far this year. And the people in the RVs are grateful.

“It helps out immensely, that’s for sure,” said Sean Eagle, who recently began living out of one. “Or else, I wouldn’t know what to do.”