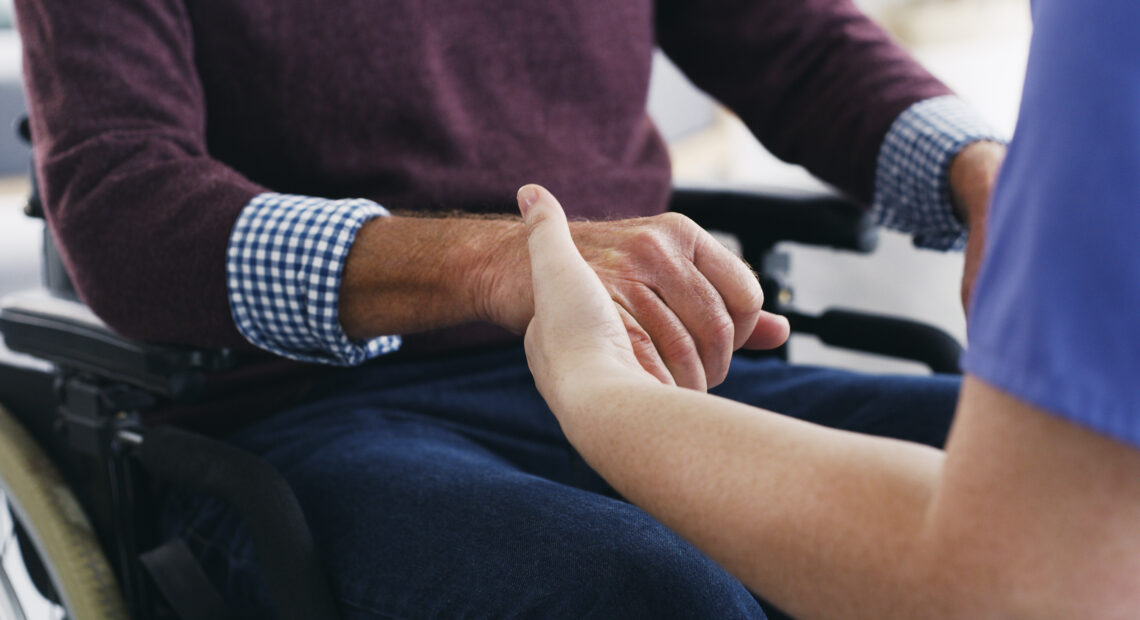 Anita Baron first noticed something was wrong in August 2018, when she began to drool. Her dentist chalked it up to a problem with her jaw. Then her speech became slurred. She managed to keep her company going — it offers financing to small businesses — but working became increasingly difficult for her as her speech worsened. Finally, nine months, four neurologists and countless tests later, Baron, now 66, got a diagnosis: amyotrophic lateral sclerosis.

ALS, often called Lou Gehrig’s disease after the New York Yankees first baseman who died of the disease in 1941, destroys motor neurons, causing people to lose control of their limbs, their speech and, ultimately, their ability to breathe. It’s usually fatal in two to five years, though about 10% of people survive ten years or more.

People with ALS often must quit their jobs — and sometimes their spouses do, too, to provide care — leaving families in financial distress. A decade-long campaign by advocates highlighting this predicament notched a victory last month when Congress passed a bill opening key support programs earlier for ALS patients. 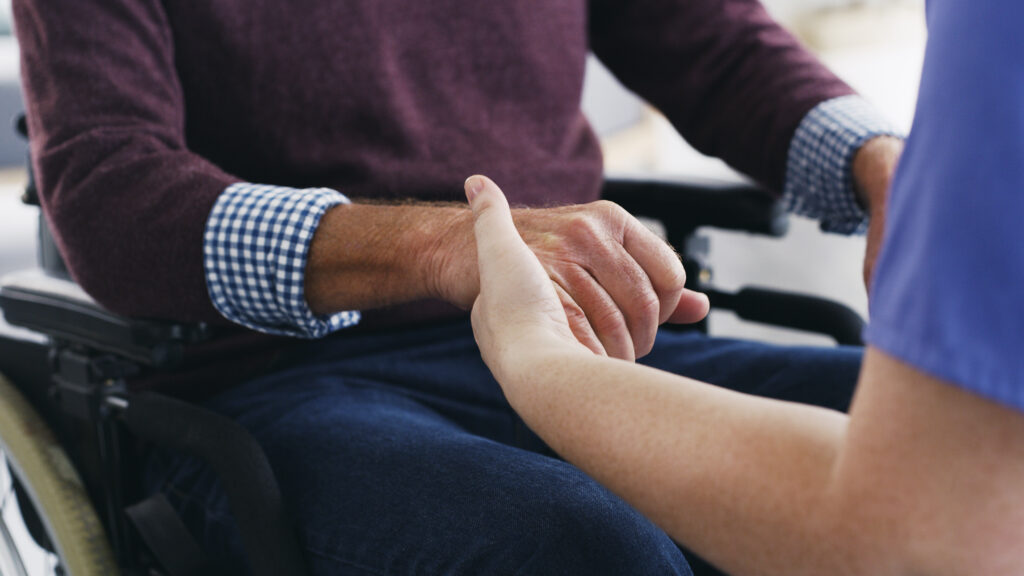 Once the rules for implementing it are worked out, a bill signed into federal law in December will eliminate the required five-month waiting period for diagnosed ALS patients to begin disability benefits, enabling quicker Medicare coverage as well.
CREDIT: LumiNola/Getty Images

In December, President Donald Trump signed the bill into law. It eliminates for ALS patients the required five-month waiting period to begin receiving benefits under the Social Security Disability Insurance program, which replaces at least part of a disabled worker’s income. Gaining SSDI will also give these patients immediate access to Medicare health coverage.

Advocacy groups note that the Social Security Administration still will need to set up procedures for implementing the law, before patients will see the benefits.

The Muscular Dystrophy Association, an umbrella organization for people with 43 neuromuscular conditions, partnered with other ALS groups to support the bill to eliminate the SSDI waiting period.

“We’re hopeful that it can serve as a model for other conditions that may be similarly situated,” says Brittany Johnson Hernandez, senior director of policy and advocacy at MDA.

In the weeks leading up to passage of the bill, Sen. Mike Lee, R-Utah, sought to broaden the scope of the legislation to include other conditions. He pledged to continue to work on legislation to eliminate the SSDI waiting period for additional diseases that meet certain criteria, including those with no known cure and a life expectancy of less than five years.

Eliminating the SSDI waiting period has been a top priority for ALS advocates. There is no simple, single test or scan to confirm that someone has ALS, though symptoms can escalate rapidly. By the time people finally get the diagnosis, they are often already seriously disabled and unable to work; waiting five months longer for financial aid can be a burden, according to patients and families.

“Five months may seem like a short period of time, but for someone with ALS it matters,” says Danielle Carnival, CEO of I Am ALS, an advocacy group. “It’s a huge win and will make a huge difference for people right away.”

Eligibility for SSDI benefits generally requires people to have worked for about a quarter of their adult lives at jobs through which they paid Social Security taxes. Benefits are based on lifetime earnings; the average monthly SSDI benefit was $1,259 in June 2020, according to the Social Security Administration. (The average retirement benefit was $1,514 that month.)

The SSDI waiting period was intended to make sure the program served only people expected to have claims that would last at least a year, says Ted Norwood, chief legal officer at Integrated Benefits Inc. in Jefferson City, Mo., who represents SSDI applicants. But it isn’t necessary, he adds, because disability rules now require that people have a condition that will keep them out of work at least a year or result in death.

“The five-month waiting period serves no purpose as far as weeding out cases,” Norwood says.

Existing federal law also made special health care provisions for people with ALS and end-stage renal disease. Most people with disabilities must wait two years to be eligible for Medicare, but people with either of those two diseases can qualify sooner. ALS patients are eligible as soon as SSDI benefits start.

The new law could have made a big difference for Baron, who lives in Pikesville, Md. She and her husband, who works part time at a funeral parlor, didn’t have comprehensive health insurance when she got sick. They were enrolled only in a supplemental medical plan that paid out limited cash benefits.

By the time Baron was diagnosed and her SSDI and Medicare came through, she and her husband had maxed out their credit cards, raided $10,000 from their IRA and gone to their family for money. They were $13,000 in debt. They sold their house and moved into a condo to save on expenses.

“It is imperative that as [people] become more and more debilitated and cannot work, that they have immediate access to SSDI,” Baron says.

Like Sen. Lee, some patient advocates say the accommodations on disability benefits and Medicare made for patients with ALS should be extended to others with similarly intractable conditions.

The Social Security Administration has identified 242 conditions that meet the agency’s standards for qualifying for disability benefits and are fast-tracked for benefit approval.

Once approved, people with these conditions still must wait five months before they receive any money. Now, under the new law, people with ALS can skip the waiting period, though no one else on the “compassionate allowances” list can.

Breast cancer advocates are hoping for similar accommodations for people with metastatic breast cancer. Legislation introduced in the House and Senate in 2019 would have eliminated the SSDI waiting period for this group, but it did not pass.

Tackling the problem one condition at a time doesn’t make sense, others argue.

“Can you imagine, one by one, people with these conditions trying to find people in the House and in the Senate to champion the bill?” says Carol Harnett, president of the Council for Disability Awareness, which represents disability insurers.

Deb McQueen-Quinn thinks it would be good if the new law set a precedent for eliminating the SSDI waiting period. At 55, McQueen-Quinn has lived with ALS since 2009, far longer than most.

A former convenience store manager, she uses a wheelchair full time now. She knows all too well the toll of the disease. ALS runs in her family, and she’s watched several family members, including her sister, brother and a cousin die of it. Researchers estimate that ALS is inherited in this way in up to 10% or so of ALS cases.

Her sister, a former quality control engineer, was diagnosed in 2006 and died the following year — a week before she would have received her first SSDI payment.

McQueen-Quinn, who lives in Wellsville, N.Y., with her husband, has two children in their 30s. Her son, 33, carries the familial genetic mutation that leads to ALS. So far he hasn’t developed symptoms. But it’s for people like her son and other family members that she fought for the new law.

“Now that we’ve set the precedent, I’m sure you’ll see a lot of other diseases go after this,” she says.

KHN is a nonprofit, editorially independent program of the Kaiser Family Foundation and is not affiliated with Kaiser Permanente.