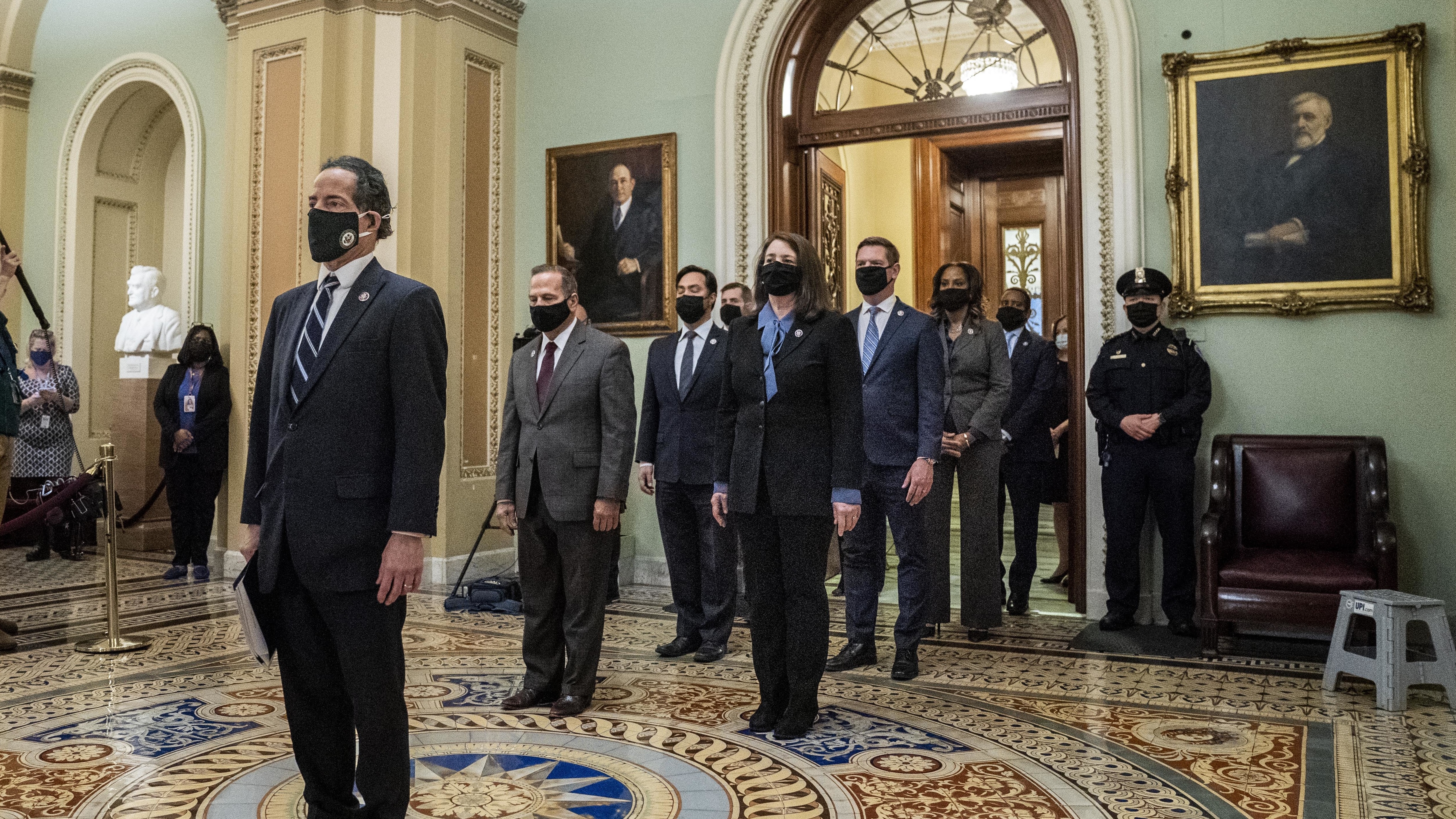 President Trump made history when he became the first president to be impeached twice by the House of Representatives. Roughly a year ago, the Senate acquitted Trump on two articles — abuse of power and obstruction. This time he faces one article approved by the House arguing he incited an insurrection at the U.S. Capitol on Jan. 6, the day that Congress was required by the Constitution to count and certify the electoral votes in the 2020 election.

Here’s how the trial is expected to work:

In a proceeding like this, House impeachment managers act as the prosecution, making their case of Trump’s culpability to the senators, who act like jurors. House Speaker Nancy Pelosi, D-Calif., selected nine Democrats to serve as managers.

On Jan. 25, these managers delivered the article of impeachment to the Senate, which triggered the start of a trial.

Senate Majority Leader Chuck Schumer and Senate Minority Leader Mitch McConnell agreed last month to give the former president’s defense team some time to prepare and established a schedule for filing pre-trial briefs. The managers submitted their 80-page brief on Feb. 2 and the former president’s defense team filed their own pre-trial brief on Feb. 8.

Schumer and McConnell agreed Monday afternoon to a resolution that sets up the structure of the trial. Schumer said it will ensure a “fair and honest” process.

In a statement sent by Trump’s office Monday afternoon, Trump’s legal team said they were pleased there was bipartisan support on structuring the trial.

“This process will provide us with an opportunity to explain to Senators why it is absurd and unconstitutional to hold an impeachment trial against a private citizen,” it read.

What is the timing for the trial?

On Tuesday, beginning at 1 p.m. ET., there will be up to four hours equally divided between the impeachment managers and the president’s counsel to debate the constitutionality of the trial.

After the arguments, the Senate will vote on whether it has the jurisdiction to try a former president. The threshold to pass is a simple majority of 51 votes. 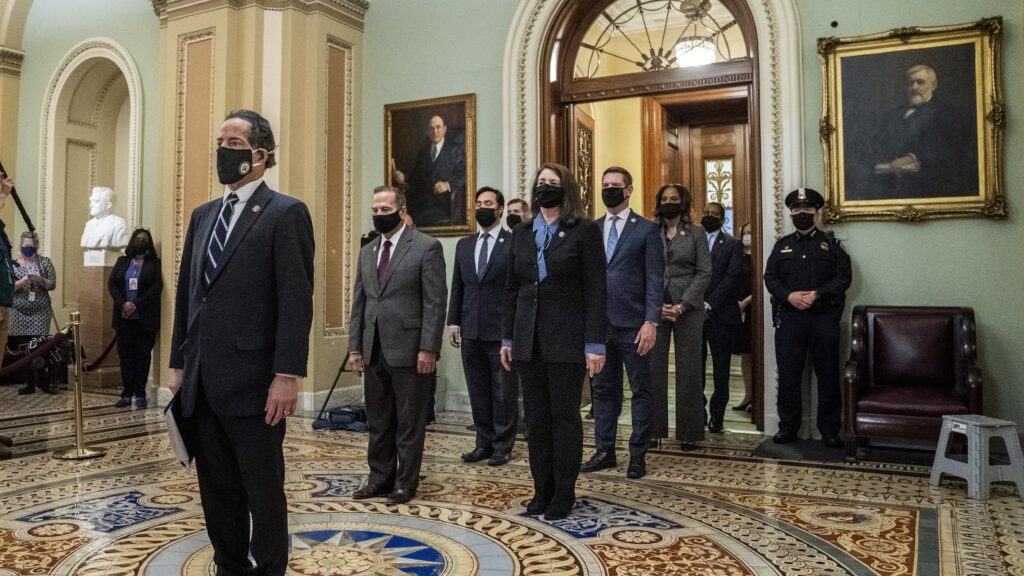 If it passes, the trial will proceed with up to 16 hours per side to present their case beginning at noon ET on Wednesday.

The resolution states that each side can’t go over two days in presenting their case and that each day’s presentation can’t exceed 8 hours.

After the presentations are done, senators will have a total of four hours to question both sides. Then, there will be four hours divided equally between the parties for arguments on whether the Senate will consider motions to subpoena witnesses and documents, if requested by the managers.

The impeachment managers have already said that the senators themselves, who were sitting in the chamber the day of the Jan. 6 attack, are witnesses. Most lawmakers on both sides say adding witness testimony would prolong the trial unnecessarily.

There will be up to four hours equally divided for closing arguments, along with deliberation time if requested by the senators before the vote takes place.

The trial will pause during the Jewish Sabbath, which begins Friday at sundown and ends Saturday evening, at the request of Trump’s lawyer David Schoen.

The trial will reconvene the afternoon of Sunday, Feb. 14.

Who is defending Trump?

David Schoen and Bruce Castor, Jr., were named as Trump’s lawyers after all five members of his defense team reportedly left a little more than a week before the trial.

Castor is the former county commissioner and former district attorney for Montgomery County, Pa. He’s known, in part, for a case that he didn’t pursue in 2005, declining to prosecute Bill Cosby.

Schoen has worked briefly as counsel for Trump’s longtime friend Roger Stone. He is also linked to Jeffrey Epstein, the disgraced financier and convicted sex offender. In 2019, Schoen told the Atlanta Jewish Times that he met with Epstein in prison days before Epstein hanged himself.

A third lawyer, Michael van der Veen, was listed on Trump’s pre-trial brief that was submitted on Monday.

Rep. Jamie Raskin, D-Md., the lead impeachment manager, sent a letter to Trump on Feb. 4., inviting the former president to testify under oath.

Trump’s attorneys responded by calling the request a “public relations stunt.” Jason Miller, a senior adviser to Trump, told NPR’s Domenico Montanaro that Trump would not testify, labeling the trial an “unconstitutional proceeding.” It’s worth noting that Trump also declined to participate personally in his first impeachment proceedings a year ago.

What are the two sides expected to argue?

In their brief, House managers argue Trump is “singularly responsible” for the violence that ensued at the Capitol after rallying his supporters.

“To protect our democracy and national security — and to deter any future President who would consider provoking violence in pursuit of power — the Senate should convict President Trump and disqualify him from future federal officeholding,” it reads.

Meanwhile, Trump’s lawyers have dismissed the impeachment case against the former president as “political theater.”

They claim Trump didn’t encourage violence and that his comments at the rally on Jan. 6 are protected by the First Amendment.

Central to their defense is the question of constitutionality. Trump’s team has denied that Trump can be tried as a former president, a claim disputed by many constitutional scholars.

Raskin, a former constitutional law professor, told NPR’s Kelsey Snell that the Constitution applies “on your first day of office; it applies on your last day in office and everything in between.”

He added: “Everybody can understand that if we had a rule that you can’t be tried for anything that you did in your last three or four or five weeks in office that would basically be sending an extremely dangerous signal to future presidents.”

Will Trump be convicted?

A Trump conviction is very unlikely. Democrats would need 17 Republicans to join them in voting yes to convict Trump. In an earlier vote on the constitutionality of the trial, only five Republicans broke with their GOP colleagues, a vote that likely foreshadows the intentions of most Republican senators in the trial.

However, if the Senate does vote to convict Trump, the Senate then votes on whether to bar Trump from seeking any federal office in the future. That vote requires a simple majority.