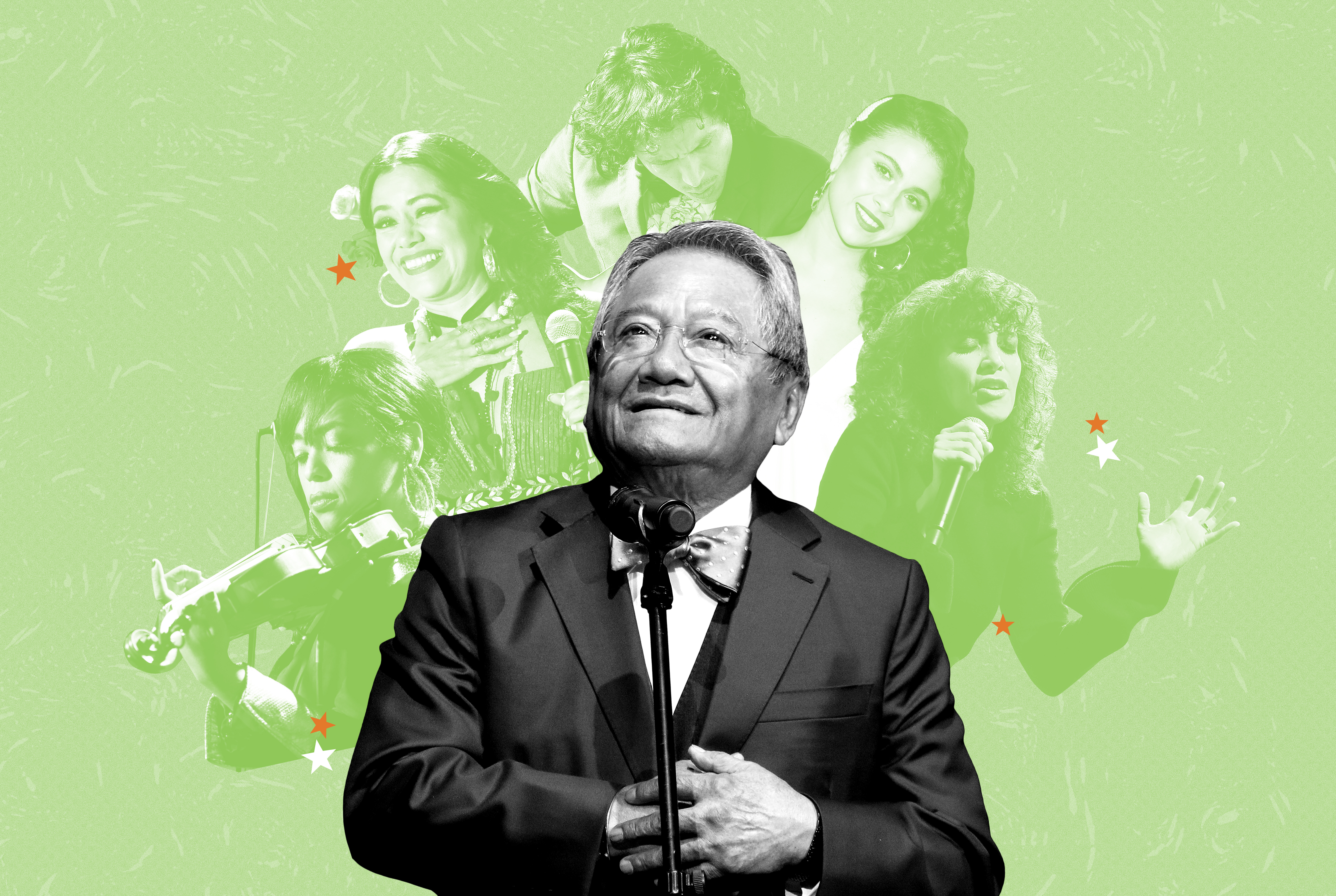 It’s Valentine’s Day week here at Alt.Latino HQ. Hopefully you’ve known that dizzying feeling of falling in love; if you’ve ever been so fortunate, you know that conveying those complex emotions can be quite difficult. And to set those indescribable feelings to music? It’s a tough task that’s not for the faint of heart! 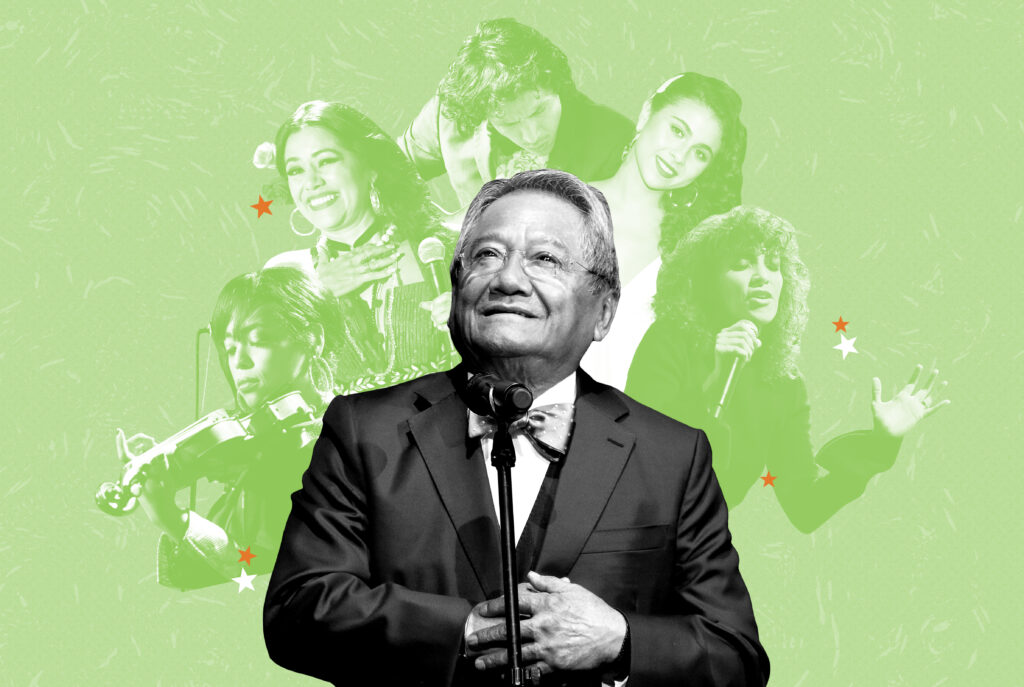 So this week on the show, we’re celebrating one of the masters of the craft, Mexican composer, pianist and vocalist Armando Manzanero. The celebrated musician was revered throughout the Spanish-speaking world for his songs, which were mostly performed by others. He also had admirers on this side of the border in vocalists like Frank Sinatra, Tony Bennet and Abbey Lincoln.

We lost Armando Manzanero this past December in Mexico City to COVID-19 complications at the age of 85. This week, we present our tribute for Valentine’s Day, a day when his profound words can help us express the inexpressible. To honor the iconic composer, we reached out to some Alt.Latino favorites to ask them to share some of their favorite performances of Armando Manzanero’s enduring love songs.

Mireya Ramos: What a song! It’s really hard to choose just one song by Manzanero. This particular song I chose because I love the Luis Miguel rendition, but also because it transports me to my childhood, all those days growing up in my parents’ restaurant listening to my parents make harmonies with Luis Miguel. Also, because the lyrics truly capture the sentiment of longing for and missing someone. Manzanero, you’re a genius.

Rodrigo Sanchez: We want to introduce a track from maestro Armando Manzanero.

Gabriela Quintero: He was one of the [greatest] composers, a Mexican composer. [He was an] incredible musician. I think we all grew up with his songs, [they’re] very popular in Mexico. Even young generations wouldn’t really know who he was, but they know a lot of the songs.

Sanchez: They know all of the songs.

Quintero: Really, he was an incredible musician and such a nice guy.

He passed last December, so me and Rodrigo made an arrangement of one of his iconic pieces called “Te Extraño,” which means, “I miss you.” We did a collaboration with a friend of ours – another great musician –who does classical music, so he did an orchestration arrangement for this piece.

This is our first recording with an orchestra, so just incredible track, incredible music, so hopefully you like it. It’s called “Te Extraño” from maestro Armando Manzanero. Enjoy!

Quintero: Enjoy and we miss you by the way, we te extraño.

Carla Morrison: One of my favorite songs from Armando Manzanero is “Contigo Aprendí.” I feel like that song really describes what a relationship actually means. And it’s so special how he put it into words, how he made the melodies. It’s just so special. He had so much magic in all his work and to tell stories. So “Contigo Aprendí” is just amazing, every verse, every lyric is just so simple yet so profound and beautiful.”

Lila Downs: Armando Manzanero’s song, “Contigo Aprendí,” is the song that I really love of his. And I like the version by Eugenia León. And it’s a very romantic song and it reminds me of another time, of course, in my life and a lot of love.

Eduardo Arenas: My favorite Armando Manzanero song is by far “Adoro.” It’s a song interpreted by Bronco. The song’s so damn good I thought Bronco wrote it, you know what I’m sayin’? They got the electronic drum kits, got the synths, you know, you got the choruses. I got to see him perform it live at Tropicalia – they smashed it. So dope. Rest in peace, Manzanero.

Silvana Estrada: Hi, my name is Silvana Estrada. I’m a singer-songwriter from Veracruz, Mexico. Armando Manzanero is one of my favorite composers. I really love his song, “Esta Tarde Vi Llover.” I guess I love it because of the melody – it’s such a beautiful melody. And, I guess, I love this song even more when Los Panchos sing it. So, yeah, I love Armando Manzanero.

Gaby Moreno: Well, it was one of the greatest honors of my career to have shared with maestro Armando Manzanero. His music has been with me since I was little. My parents introduced me to his wonderful songs. The truth is I came to appreciate them even more in my adulthood. Two years ago, he invited me to sing with him, one of his many amazing songs called “Me Vuelves Loca.” He also invited the renowned Cuban clarinet player Paquito D’Rivera. And I not only had the privilege of recording the song with him, but also of singing it live at a concert that took place in his native land of Mérida with him to celebrate his life, his career. And the experience was even more magical because the backdrop of the stage was none other than the Mayan ruins of Chichén Itzá. It was truly an unforgettable moment that I will keep in my heart forever, just like all of his songs.