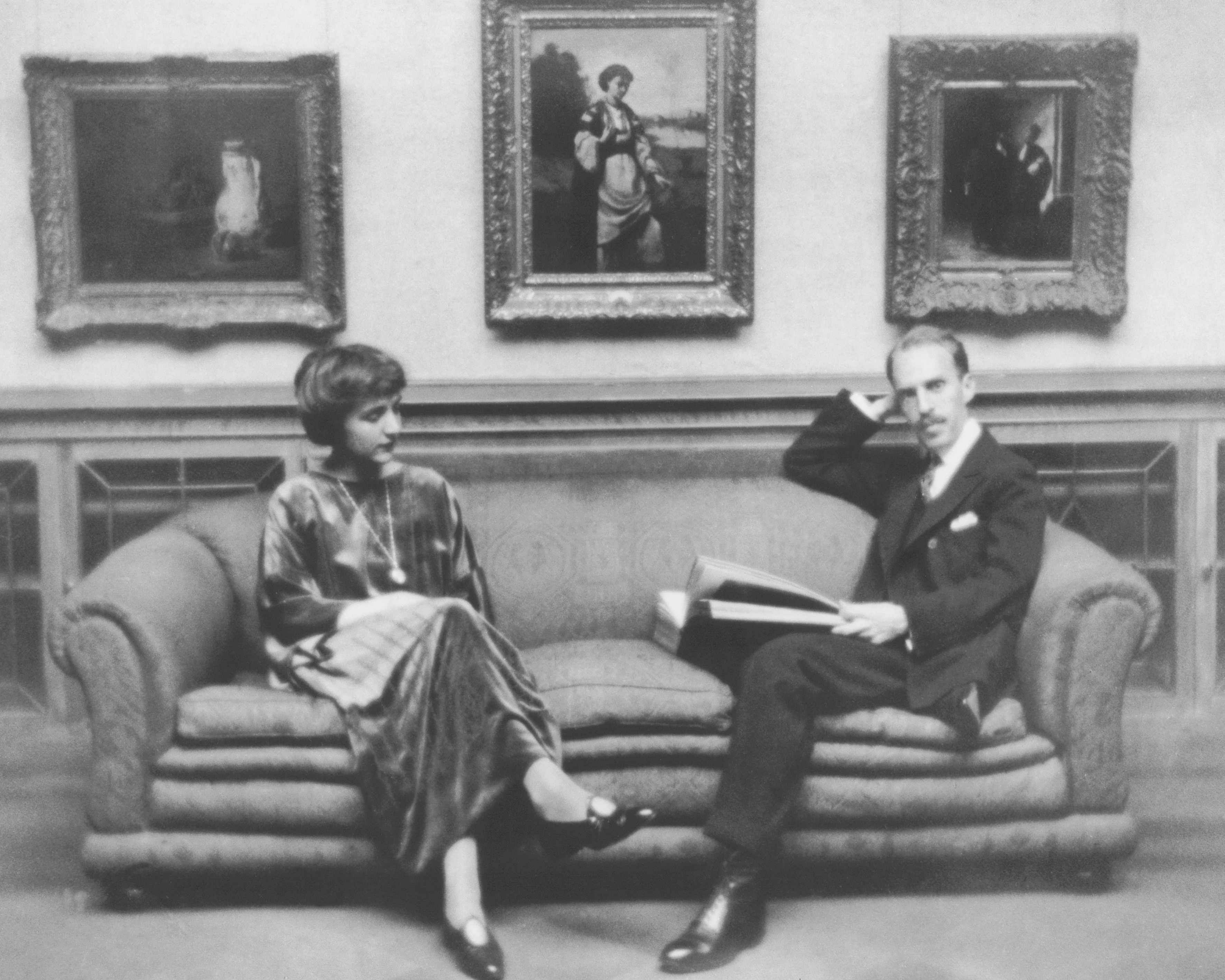 One hundred years ago, America’s first museum of modern art opened in a private mansion in Washington, D.C. Founder Duncan Phillips was an early collector of Picasso, Matisse, Van Gogh. The Phillips was the first to buy a Georgia O’Keeffe. Decades ago, in this city of museums, it became my favorite one.

Newly wed and new to Washington, most Sunday afternoons in 1962 Lou Stamberg and I would walk down a hill with coffee and the paper, arrange ourselves on one of the Phillip’s brocade love seats, look up at a Matisse or Manet, and … light our cigarettes. It was like visiting a really rich uncle with fabulous taste and a collector’s eye. And ashtrays!

Duncan Phillips had money, taste and the generous heart to help others see beauty. He believed in the healing power of art. One hundred years later, that belief still holds.

Dorothy Kosinski, director of the museum, tells a story: “I was standing outside of the Phillips in the fall when we were open for a while. A woman came out, exhaled, and said, ‘Oh! That was such a wonderful vacation!”

She needed it — we all do — a vacation from the pandemic, the economic stresses, the political upheavals. A chance to breathe. I went to the Phillips right after Sept. 11, to be surrounded, in the midst of that horror and confusion, by some eternals: Renoir’s amazing Luncheon of the Boating Party, Cézannes, Van Goghs — some healing comforts.

Kosinski and her staff have brought the Phillips into the 21st century. New works by women, people of color; new media — video, L.E.D. — pop up near Bonnard and El Greco and Jacob Lawrence (the museum owns a good chunk of his great Migration series). Collecting goes on so the museum doesn’t become, as Kosinski puts it, “a nostalgia piece.” Duncan Phillips wouldn’t have wanted that.

Just a few years before he died in 1966, Phillips was buying oils for his Rothko room — a small, silent space with Mark Rothko’s big, dark, glowing canvasses on all four walls. Alfred Molina once played the painter on Broadway. On the Phillips’ 90th anniversary Molina told me on NPR that he didn’t “get” Rothkos when he first saw them in London. “I thought … they’re a bit dark … a bit gloomy.”

Then he visited the Rothko room at the Phillips. “I found them very moving, looking at those paintings in that room. The sense of getting lost inside them. I found it very emotional.” Molina understood that Rothko wanted viewers to be moved. And the actor understood how to say the line — “I’m here to stop your heart, I’m not here to make pretty pictures.”

Phillips believed Pierre-Auguste Renoir’s Luncheon of the Boating Party (1880-81, oil on canvas) was “one of the greatest paintings in the world.” He acquired it in 1923. “Such a picture creates a sensation wherever it goes,” he said.
CREDIT: The Phillips Collection

Well, the Phillips has lots of pretty pictures, too. That gleaming Renoir — the only painting I ever wanted to be in — full of sun-kissed friends and family finishing lunch on a porch near the Seine. Duncan Phillips bought it 2 years after he opened the museum. He paid $125,000. It’s the star of the exhibition — “Seeing Differently: The Phillips Collects for a New Century.” The show skips through decades’ worth of old and new masterpieces. (One definition of a masterpiece: it speaks to the ages.)

Duncan Phillips created this museum of marvels from tragedy: the deaths of his father and brother. In his grief, he decided their Memorial would be a museum — free, open to the public, in his own home. He decided art was a way to pull out of his depression. Again, creativity reaching our moods and hearts.

The writer Julia Alvarez found courage at the Phillips. On NPR she told me it happened when she was 34, divorced, “a migrant poet” she said, on a fellowship in Washington. Stressed, strapped for money, nervous about teaching, she spotted a small 1894 Bonnard — Circus Rider — that gave her strength.

“That little circus rider was on top of this horse that was such a powerful steed that it was racing out of the canvas. The canvas cut it off at the neck,” she said. Behind the rider, sitting in the stands, are figures in black … watching. Like judges, to Alvarez, just waiting for the bareback rider to lose her grip. But no. “She just stayed focused. And I thought, she’s telling me how to do this. So all during that year, whenever I had to go do a reading or teach a workshop I’d drop in and get my little infusion of hope. I really think she carried me through that year.

Much later, by then a prize-winning author, Julia Alvarez visited the painting again. “My eyes filled, and I said, ‘So here we are. Here we are.’ And when no one was looking … I reached up and I touched the canvas.”

For 100 years now, the Phillips Collection, this intimate, welcoming museum, has touched, and animated and excited visitors with the power of art. 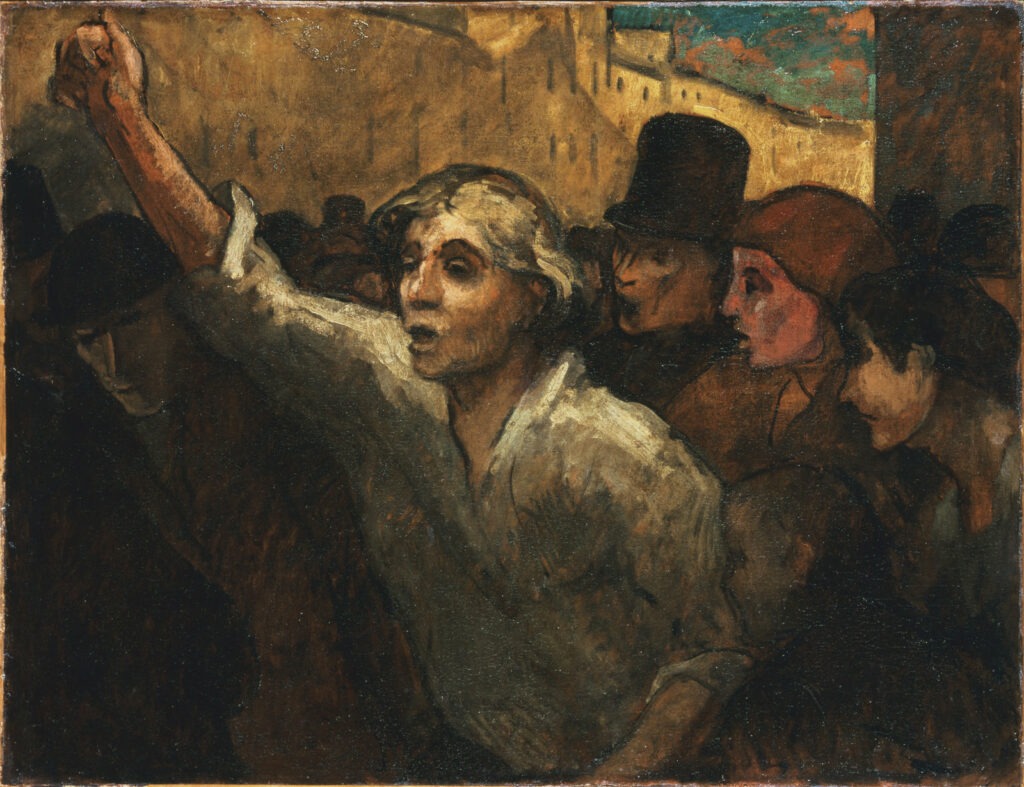 Phillips acquired Honoré Daumier’s The Uprising (1848 or later, oil on canvas) in 1925. He repeatedly referred to it as the “greatest picture in the Collection.” The Phillips Collection