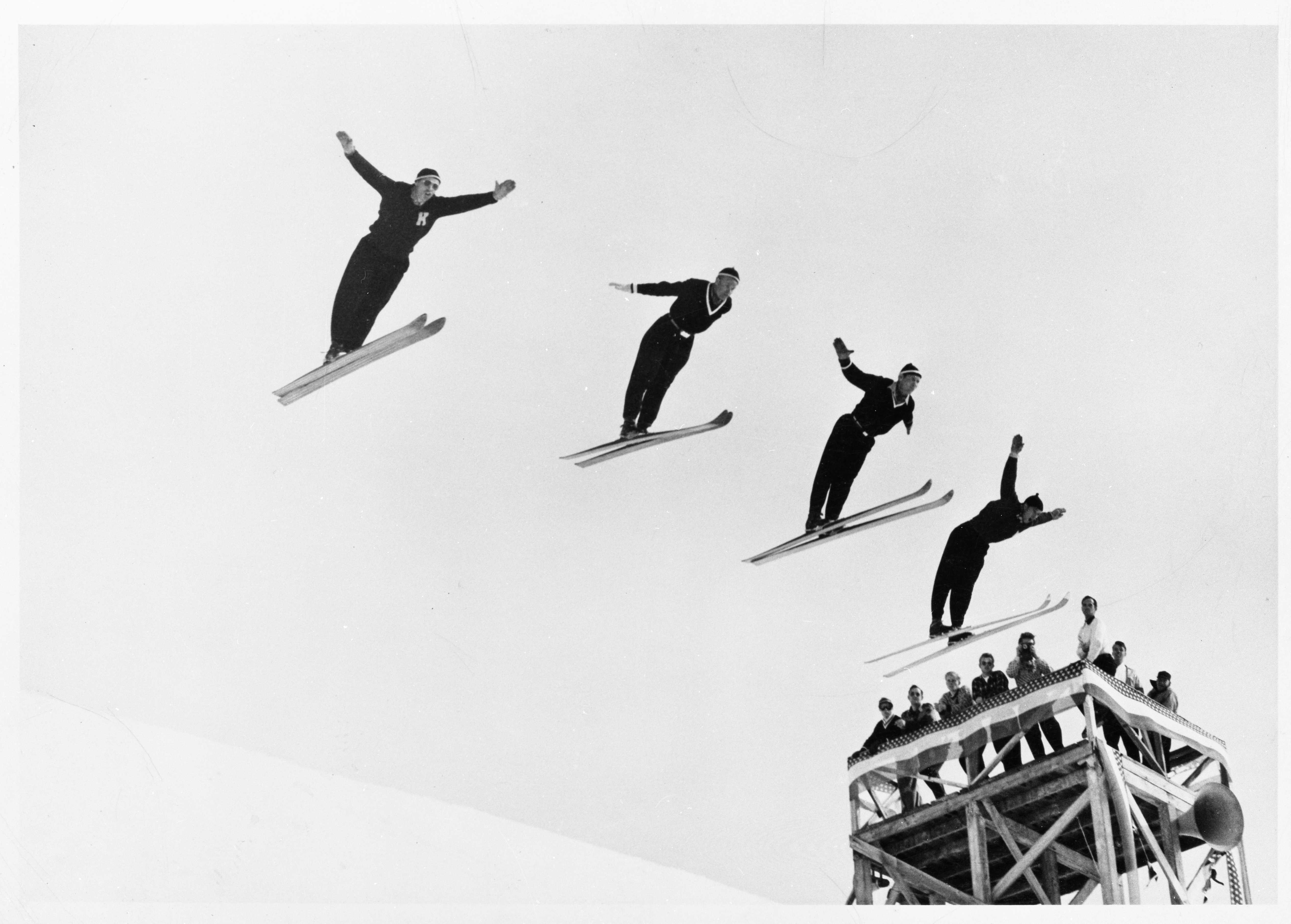 The Northwest Was A Ski-Jumping Hotbed. A New Book And Museum Exhibit Share The History

Few among us have tried our luck at competitive ski jumping, and there is no shame in that considering these skiers can reach speeds around 60 mph before they take flight. But there’s something riveting about the daring sport even for casual onlookers. The Pacific Northwest was once a “hotbed” for Nordic jumping as detailed in a new book and a parallel museum exhibit.

Author John Lundin of Seattle was researching an earlier book about the history of skiing on Snoqualmie Pass, when he discovered that ski jumping was actually a bigger deal than alpine skiing in the Pacific Northwest before World War II.

“I didn’t realize how significant it was to the early days of skiing,” Lundeen said. “In fact, for several decades it was by far the most popular form of the sport.”

“In those days, the best ski jumpers were like professional quarterbacks are now. They were really rock stars,” Lundin said in an interview.

Lundin’s new book, “Ski Jumping in Washington: A Nordic Tradition,” accompanies a newly opened, three-month exhibition at the National Nordic Museum in Seattle. Lundin and the Washington State Ski and Snowboard Museum, of which he is a board member, originally pitched the idea for the ski jumping exhibition to the Nordic museum. 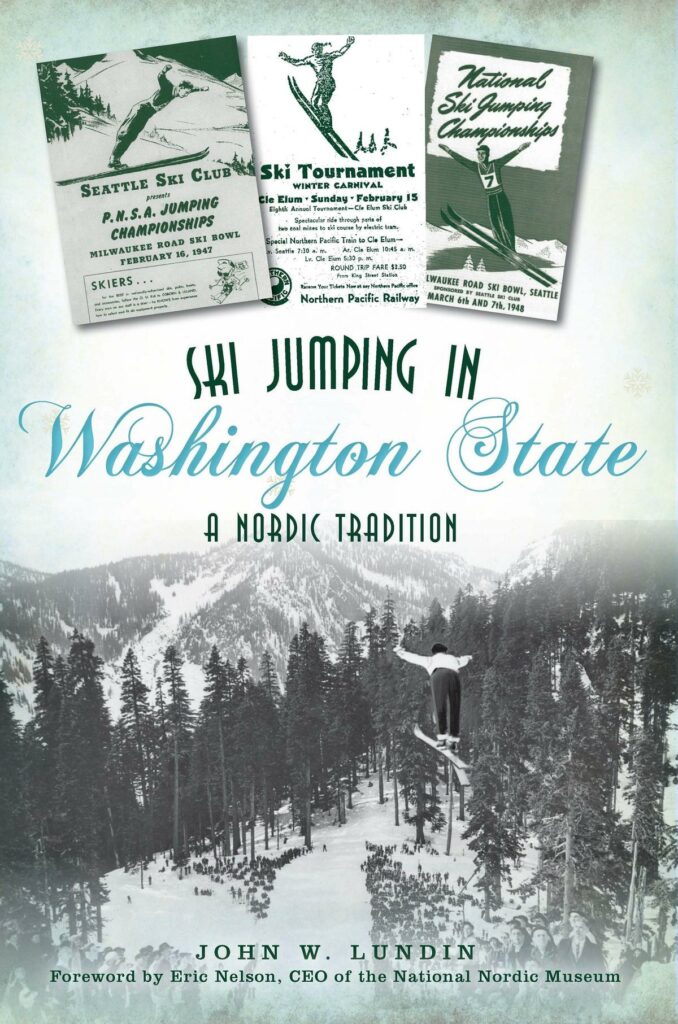 “It seemed like a really great fit,” said Leslie Anderson, the director of collections, exhibitions and programs at the National Nordic Museum.

Anderson said ski jumping became a popular sport in Norway right before a period of mass migration. She said Scandinavian immigrants to the Pacific Northwest found “all the conditions were right” to introduce the sport and bond through it.

“It was a way for Norwegian Americans to connect with their heritage in a new place, their new home,” Anderson said in an interview.

The exhibition shows the evolution of ski jumping equipment and features photographs, film clips and oral history interviews to showcase ski jumping’s development in the Pacific Northwest as well as demonstrate its cultural significance.

In this region, the first formal ski jumping events began at Rossland, British Columbia in 1898. Archival newspaper clippings describe remarkable early demonstrations in Seattle and Spokane where Norwegian-born transplants built massive temporary jumps after winter snowstorms. Seattle’s Queen Anne Hill witnessed a crowd pleasing jump-off on steep Fourth Avenue North in 1916. That happened a few years after a 1913 competition featuring jumps over 100 feet on hickory skis on Browne’s Mountain, which is now a hillside residential neighborhood at the southeast edge of Spokane.

In Washington state, subsequent ski jumping tournaments took place seasonally on Mount Rainier in summer and in winter on a circuit that included Cle Elum, Snoqualmie Pass and Leavenworth. Sometimes Mount Spokane, Mount Baker and White Pass hosted too. In Oregon, tournaments were regularly held on Mount Hood as well as sometimes west of Bend and at Sprout Springs. Sun Valley, Idaho, got in on the action by the late 1930’s. 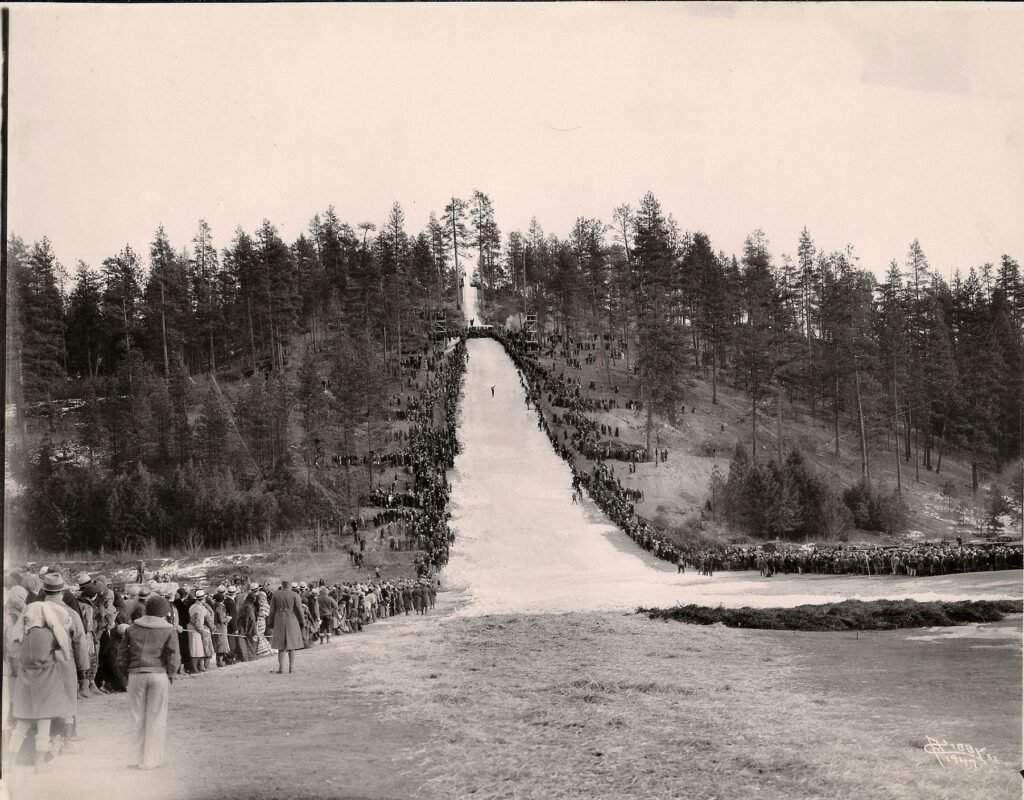 Lundin said he wrote his regional ski jumping history in an intense, three month burst last year so that it would be ready to be the companion for the museum show’s planned opening in January. But COVID-related delays ended up pushing back the opening of “Sublime Sights: Ski Jumping and Nordic America” to April 17. The exhibition is now scheduled to run through July 18.

Lundin said competitive, big hill ski jumping in the Northwest suffered a major blow when the Milwaukee Road Ski Bowl at Hyak burned down in late 1949 and was not rebuilt. By the 1970s, public interest had faded and the Northwest’s historic facilities were all dismantled. Leavenworth’s really big jump was the last to go. Unsustainable maintenance and insurance costs contributed to the demise.

In the Pacific Northwest, about the only place where beginners can learn Olympic-style ski jumping nowadays is in Leavenworth, where the local winter sports club teaches fearless youngsters the technique on what could be categorized as small and medium-sized ski jumps. These are 15-meter and 27-meter jumps, which refers to the distance from the takeoff to the optimal landing point.

There remain only three operational ski jumping hills that meet international competition rules in the American and Canadian West. They are the 2010 Olympic Games venue near Whistler, British Columbia, the 2002 Olympic ski jump in Park City, Utah, and another ski jump at Steamboat Springs, Colorado. 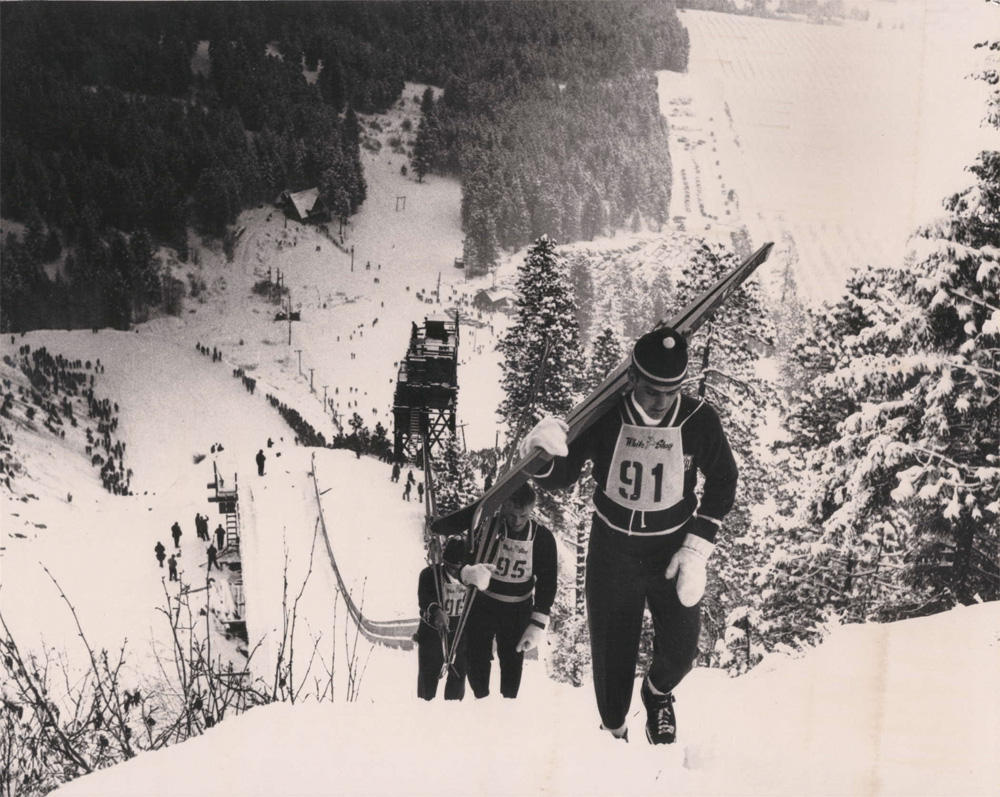 In the heyday of ski jumping at the Leavenworth Ski Hill, competitors climbed a walkway to the top of the large ski jump. CREDIT: Ski Heritage Foundation tinyurl.com/Y87A6OS4

Virtual lectures and the in-person exhibition

Saturday, April 24, 2 p.m. – Author and historian John Lundin will give an overview of ski jumping in the Pacific Northwest and describe its heyday based on his new book.

Thursday, April 29, 6 p.m. – The museum interviewed a number of former Nordic ski jumpers between 2010 and 2018 as part of its oral history program. It will share highlights from a selection of the interviews to highlight the dangers and delights of the sport.

If you go in-person, the “Sublime Sights: Ski Jumping and Nordic America” exhibition can be visited during the National Nordic Museum’s reduced opening hours of 10 a.m.-5 p.m., Thursdays-Sundays. The museum in Seattle’s Ballard neighborhood recommends that guests reserve a timed admission slot in advance so that it can control capacity.