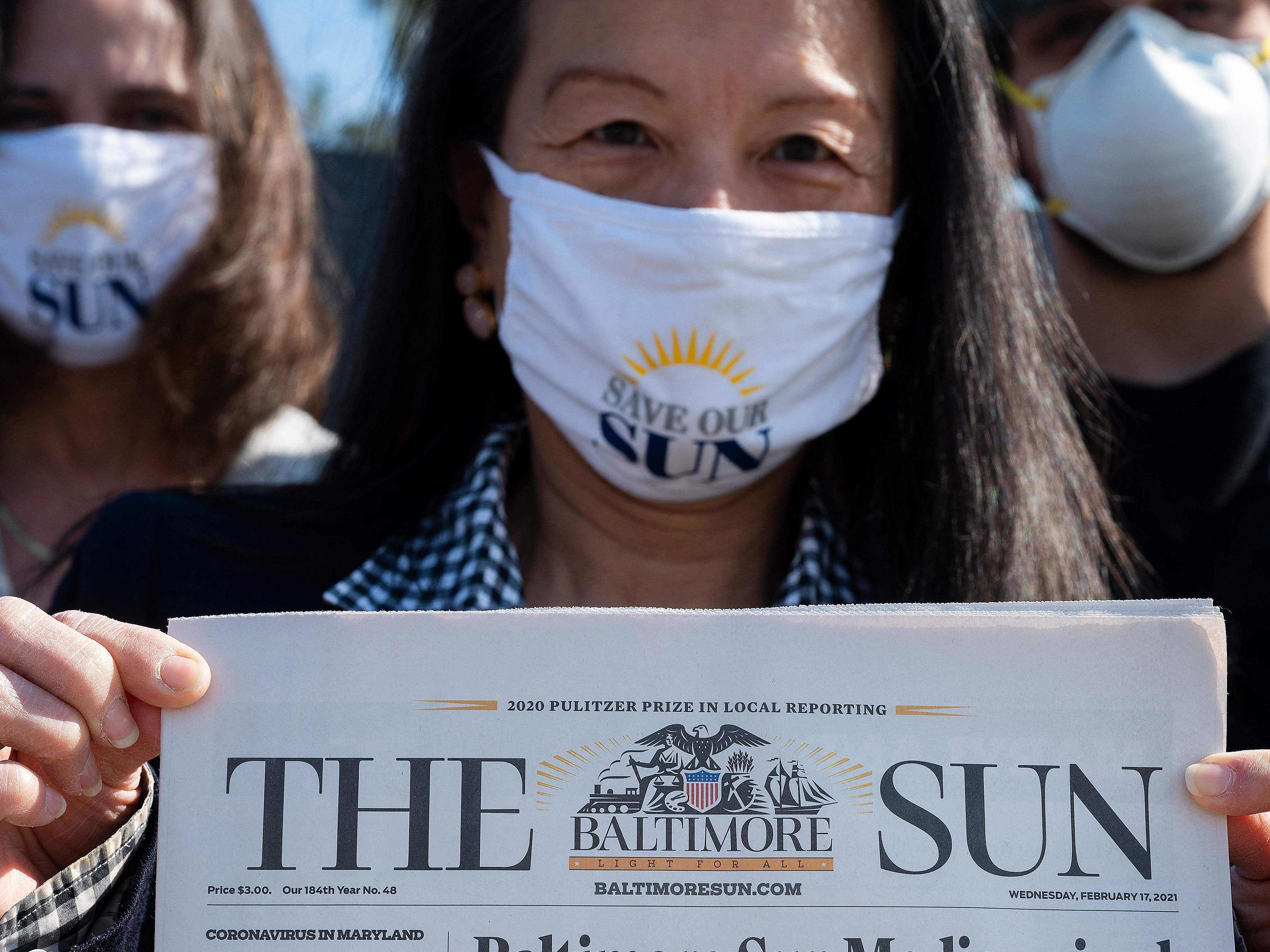 The purchase represents the culmination of Alden’s years-long drive to take over the company and its storied titles – including Chicago Tribune, the Baltimore Sun, New York Daily News and major metro papers from Hartford, Conn. to Fort Lauderdale, Fla.

Baltimore Sun reporter Jean Marbella participated in a Save Our Sun rally in March, part of an effort to secure an alternative buyer to Alden Global
CREDIT: Jim Watson/AFP via Getty Images

After a process marked by intrigue and whiplash, Alden dashed all those hopes. The hedge fund already held a 32-percent stake in Tribune. Alden’s founder, Randall Smith, sits on Tribune’s board, as do two other directors with close ties to Alden. Smith’s protégé, Heath Freeman, oversees Alden’s previous newspaper holdings and is the fund’s president. Both men keep low public profiles.

The other top shareholder, Los Angeles Times owner Patrick Soon-Shiong, who held nearly 24 percent of Tribune’s shares, abstained from the vote, saying he had held it as a passive investment and was focusing on his other holdings, including the Times and the San Diego Union-Tribune.

That appeared to be the death-knell for the journalists’ hopes. Yet there is a wrinkle: news union officials were pointing to language in filings submitted to the U.S. Securities and Exchange Commission that said “Patrick Soon-Shiong’s vote in favor of the transaction is required, based on his current ownership of the common stock.” It also said absentions would be counted as a vote against the Alden bid. It is not clear whether those assessments were changed ahead of the vote. If not, Soon-Shiong’s absention would appear to have cost Alden the vote.

Nonetheless, most parties were proceeding with the assumption Alden prevailed.

Bainum says he has not given up hope of buying The Baltimore Sun from Alden. Failing that, he intends to devote millions of dollars toward a digital news start up to compete with the Alden-owned Sun, associates say.

In a statement on Friday, Alden’s president, Heath Freeman said, “Local newspaper brands and operations are the engines that power trusted local news in communities across the United States. The purchase of Tribune reaffirms our commitment to the newspaper industry and our focus on getting publications to a place where they can operate sustainably over the long term.”

Alden already owns roughly 100 newspapers and 200 publications. In interviews with NPR, journalists who have worked at these publications warned about the hedge fund’s track record of steep cuts, consolidations and sales of real estate assets. In one six-year period, according to the News Guild union, Alden cut staff at guild-represented papers by an average of 75 percent.

Former executives and news leaders in markets including Northern California, Denver, and Connecticut sketched out ways in which Alden made recurring layoffs and buyouts a way of life. They say Alden’s cost-cutting measures made it much harder for journalists to expend the time and resources needed to hold public officials, corporations and other major players accountable through solid reporting.

In an audio recording obtained by NPR, Tribune Publishing chief content officer Colin McMahon warned journalists at Chicago Tribune in February that Alden sought to nearly double profits at its newspapers. Those profit margins currently range from 10 to 13 percent, according to McMahon; he told staffers that Alden would want them to exceed 20 percent. (McMahon is also editor in chief of Chicago Tribune.) That’s particularly daunting given that Tribune Publishing already has severely reduced headcounts at its newspapers. The Baltimore Sun newsroom, for example, has some 80-odd journalists, down from 400 two decades ago.

McMahon’s boss, Tribune Publishing CEO Terry Jimenez, publicly opposed the Alden bid. He argued the price undervalues Tribune Publishing’s worth. Alden had promoted its ability to pay for the entire deal in cash. But in small print first identified by a reporter for the newspaper union, Alden maintains the right to borrow as much as $375 million – more than half of the purchase price – for the sale. Its critics say that Alden does not appear to have enough money to consummate the deal and intends to load the newspaper company up with debt. (Alden has declined NPR’s requests for comment throughout its bidding process.)

An Appeal To A Key Investor

Ahead of Friday’s decision, Chicago Tribune city hall reporter Gregory Pratt posted an open letter to Soon-Shiong, pleading for him to oppose the Alden bid.

“Alden ownership would be a disaster for Chicago, democracy and society at large,” Pratt wrote. “It would likely also be an immediate financial disaster for Tribune Publishing itself.”

Soon-Shiong did not yield to that reasonsing, though he held enough Tribune shares to block the necessary two-thirds approval on his own. (Alden could not vote its shares on its own bid.) He recently told The Washington Post that he had hoped other buyers would come forward. His stake is valued at $160 million under the terms of the deal.

Soon-Shiong bought the Los Angeles Times and the San Diego Union-Tribune from Tribune in 2018 for $500 million and an additional $90 million in pension obligations. Journalists at the Times have lionized him for returning their newsroom to something of its prior glory, with a major hiring spree, a renewed emphasis on ambitious journalism, and fresh podcasting efforts.

But his enthusiasm has been tempered by reality. The Times was roiled by questions of racial equity in hiring and coverage decisions. And the paper has consistently run eight-figure deficits since his family bought it.

“We understand that not every fight is your fight,” Pratt wrote. “We’re not asking you to buy the company, though that would be great. But we are asking you to use your power to stop Alden from consolidating its own.”

In his statement on Friday, a spokeswoman for Soon-Shiong wrote that his family’s “focus is and will be on the continued rebuilding and revitalization of The Times and Union-Tribune. They remain honored to be entrusted with these storied news organizations and continue working to secure their longevity.”

Bainum, the Maryland entrepreneur, had originally struck a side-deal with Alden to buy The Sun for $65 million as part of the transaction. He intended to run the paper as a nonprofit. Alden then drew out negotiations over agreements to allow the paper to continue to publish using Tribune’s existing content and computer systems.

Fueled by his new-found zeal for journalism and a distrust of Alden, Bainum sought to take over the entire company. He pledged $100 million and later doubled that sum. Would-be newspaper owners professing equal dedication to the civic need for quality journalism surfaced in most Tribune markets. Mason Slaine, a significant Tribune Publishing shareholder based in Florida, promised to chip in another $100 million.

The group ran aground, however, over its failure to identify someone in Chicago with an interest in Chicago Tribune – the largest property in the company. A Swiss-born billionaire, Hansjorg Vyss, emerged to promise $100 million for Chicago Tribune only to withdraw after determining he could not turn it into a paper of national import such as The Washington Post and The New York Times. The lack of a suitor for Chicago derailed Bainum’s efforts.

In a statement released after the shareholder vote, Bainum said he is not finished.

“While our effort to acquire the Tribune and its local newspapers has fallen short, the journey reaffirmed my belief that a better model for local news is both possible and necessary,” Bainum wrote. “Today, my focus remains where it began: in the city of Baltimore and my home state of Maryland. I am busy evaluating various options, all in the pursuit of creating locally-supported, not-for-profit newsrooms that place stakeholders above shareholders and journalistic integrity above all.”

The absence of an analogous benefactor in the nation’s third-largest city has hit Chicago Tribune journalists hard. The Chicago region is home to some of the nation’s largest corporations – including Boeing, Walgreens, Archer Daniels Midland and United Airlines – as well as renowned philanthropies, including the MacArthur and McCormick foundations. Despite plenty of wealth, no one stepped forward. Neither did Ford or Knight, national foundations which have provided major underwriting for journalism initiatives. (The MacArthur, Ford and Knight foundations have each provided financial support for NPR.)

“One can stipulate to The Tribune’s decline in resources and editorial strength, and to the transparent fragility of the local news business model, and still be taken aback by the lack of civic engagement by the wealthy and the well-heeled nonprofit sector,” former Tribune managing editor James Warren commented in an email to NPR. “Despite many self-inflicted wounds, it remains a still-important institution that should be saved. Too many people exhibit an astonishing lack of memory about how it has forced accountability on government, put bad folks in jail, changed laws, and provided pleasure and utility to generations.”

The prospect of the company being saddled with fresh debt haunts Tribune veterans. Executives at the precursor Tribune Co. floundered in the early 2000s to find ways to stave off declines in the local newspaper business and sold the company to Chicago real estate executive Sam Zell. The highly leveraged deal ultimately left the company $13 billion in debt after the credit markets seized up during the Great Recession in 2008.

After exiting bankruptcy, the company was split in anticipation of a sale; the newspapers were separated from the more profitable television properties. Tribune Media, the TV company, got the newspapers’ real estate holdings to make it more appealing to investors. (New York Daily News, obtained by Tribune Publishing after the split, is an exception.)

Tech entrepreneur Michael Ferro acquired a controlling stake in Tribune Publishing, only to rebrand the company “tronc.” He embraced a strategy that would have justified deeper cuts by creating a shadow central newsroom to gin up content for the chain, and extracted huge consulting payments from the company he owned. Ferro left after being accused of sexually harassing women.

Now, Tribune journalists are girding for life under Alden, with a pocket of resistance still lingering in Baltimore.

“We’re disappointed in the [shareholder] vote, but I’m still going to hold out a little bit of hope that Stewart Bainum is going to be able to get hold of The Sun,” says Bowie, the Baltimore Sun reporter and “Project Mayhem” organizer. “I’m really proud of all the work that the reporters in Tribune have done to elevate the discussion about local news. I think there’s a national crisis in local news, and we need to start paying attention to it.”