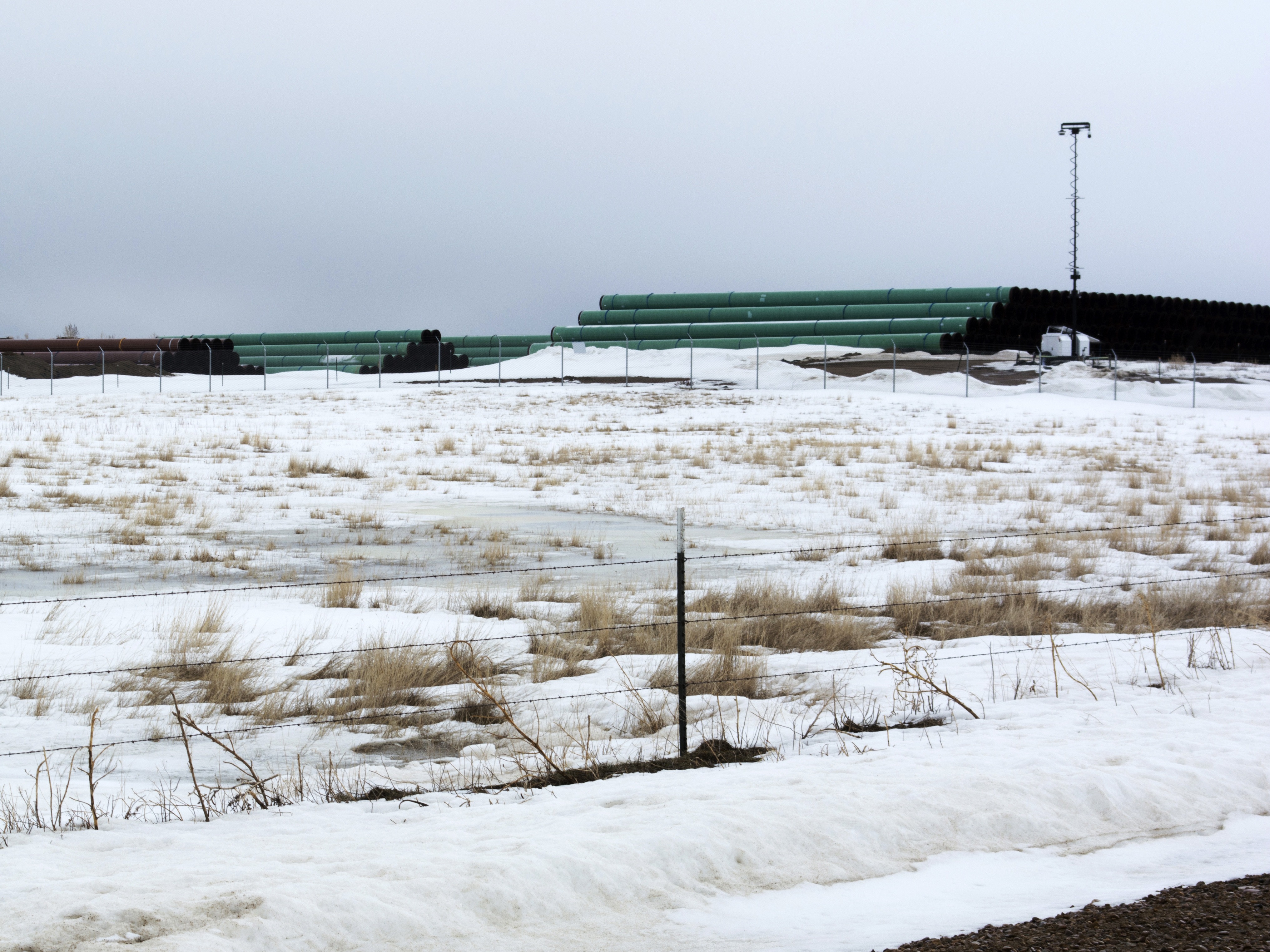 The company behind the controversial Keystone XL oil pipeline said Wednesday it’s officially terminating the project. TC Energy already had suspended construction in January when President Biden revoked a key cross-border presidential permit. The announcement ends a more than decade-long battle that came to signify the debate over whether fossil fuels should be left in the ground to address climate change.

Environmentalists opposed the pipeline in part because of the oil it would carry — oil sands crude from Alberta. It requires more processing than most oil, so producing it emits more greenhouse gases.

TC Energy had begun construction on the pipeline last year and said about 300 miles of the $8 billion project had been built. It would have carried oil from landlocked Alberta to the U.S. Gulf Coast.

Keystone XL supporters, including most of the oil industry, said the pipeline construction would have created much-needed construction jobs. 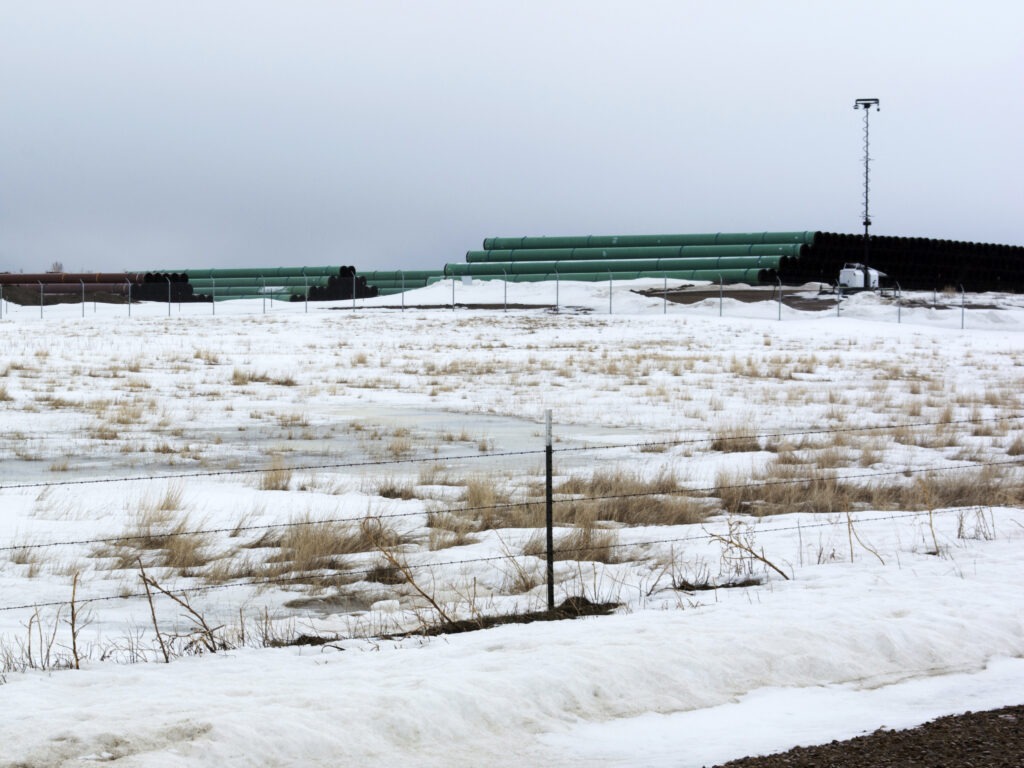 A storage yard is seen in Montana for pipe that was to be used in the construction of the Keystone XL oil pipeline. The developer has now canceled the controversial project.
CREDIT: Al Nash/Bureau of Land Management via AP

“It’s unfortunate that political obstructionism led to the termination of the Keystone XL pipeline. This is a blow to U.S. energy security and a blow to the thousands of good-paying union jobs this project would have supported,” said Robin Rorick, American Petroleum Institute’s vice president of midstream and industry operations.

The oil industry and its allies have claimed that Keystone XL would have created hundreds or even thousands of jobs. Most of those positions would have been temporary construction jobs. The State Department estimated full-time permanent jobs to be closer to 50.

“For 13 years, an international movement of frontline communities in the U.S. and Canada, Indigenous leaders, and environmentalists fought back against this terrible proposed project at every turn,” Sierra Club Executive Director Michael Brune said in a statement. “Today, we can say yet again, that our efforts were a resounding success.”

Keystone XL would have passed through Nebraska, and for years, a coalition of Indigenous tribes, ranchers and local environmentalists demonstrated, lobbied and sued to halt the pipeline’s construction. Its proposed route in Nebraska cut through the Ogallala Aquifer, the groundwater source for millions of Plains states residents.

The pipeline’s opponents in Nebraska feared that any leak from Keystone XL would damage the critical aquifer, and they welcomed the end of the project.

“On behalf of our Ponca Nation we welcome this long overdue news and thank all who worked so tirelessly to educate and fight to prevent this from coming to fruition. It’s a great day for Mother Earth,” Larry Wright Jr., chairman of the Ponca Tribe of Nebraska, said in a statement.

Pipeline opponents are invigorated by the Keystone XL decision and hope for more wins. While the Dakota Access pipeline is moving oil out of North Dakota now, its future is uncertain because of court challenges that still haven’t been resolved.

And right now in Minnesota there are protests around Enbridge’s Line 3 project that’s under construction. Hundreds of opponents rallied there this week, calling on Biden to stop that project, too.

The oil and gas industry forms the basis of a tight economic bond between the U.S. and Canada, which made the progress of Keystone XL such a protracted, high-stakes fight. Last year, Canada was the largest exporter of crude oil and petroleum products to the U.S., outstripping oil-producing nations in the Persian Gulf, according to the U.S. Energy Information Administration. The oil and gas industry accounts for about 5% of Canada’s economy, and nearly all of the industry’s exports go to the United States.

In 2008, TC Energy, then known as TransCanada, announced plans to build a pipeline that would carry 830,000 barrels of crude oil daily from Hardisty, Alberta, through the Great Plains to refineries on the Texas Gulf Coast. Because the pipeline was a major infrastructure project that crossed a U.S. border, it needed a so-called presidential permit from the State Department.

Presidential permits require environmental assessments and other federal reviews, but they were generally granted without controversy over the years to Canadian pipelines. By 2011, Keystone XL had upended that quiet bureaucratic process.

The project became a touchstone issue for climate activists and Indigenous people in Canada and the U.S, including those along the pipeline’s route. At the heart of the protests was a knot of environmental concerns from the local to the global.

Keystone XL would carry crude derived from Alberta’s oil sands. The deposits are not in underground reservoirs like conventional petroleum. Instead, they’re a tarry fossil fuel called bitumen that’s mixed in with clay, sand, rock and together, can be hard as a hockey puck. To access the bitumen, Alberta’s boreal forests are cut away in enormous strip mines. Canadians, including Indigenous peoples, have benefited economically from the oil sands mining. But they also grapple with the destruction of Alberta’s forests and health effects that some researchers say could be linked to the strip mining.

Extracting the bitumen and diluting for shipment requires energy, most of it from burning fossil fuels. That makes oil sands crude more carbon-intensive — and worse for the climate — than conventional petroleum.

Building the Keystone XL pipeline would have fostered the expansion of the Canadian oil sands industry by increasing access to U.S. markets and international ones through exports from the Gulf Coast. But activists and scientists argued that to avoid the worst effects of climate change, the world had to keep half of oil and gas reserves in the ground.

For years, the Obama administration faced pressure to approve the project — from Canada, the oil and gas industry and its political allies — while also getting enormous pushback from environmental and other activists, including major Democratic donors. After multiple delays, President Barack Obama rejected the permit to build Keystone XL in November 2015.

But the Trump administration revived the pipeline in early 2017. Legal challenges continued against it, further stalling the project. In the meantime, TC Energy’s pipeline system in the northern Great Plains experienced a series of leaks of tens of thousands of gallons of oil.

By late 2019, the Nebraska State Supreme Court seemed to clear one of the last hurdles for Keystone XL by approving its route through the state. A little more than a year later, on his first day in office, Biden revoked the federal permit for Keystone XL, leading to the end of a project that had been contested for more than a decade.