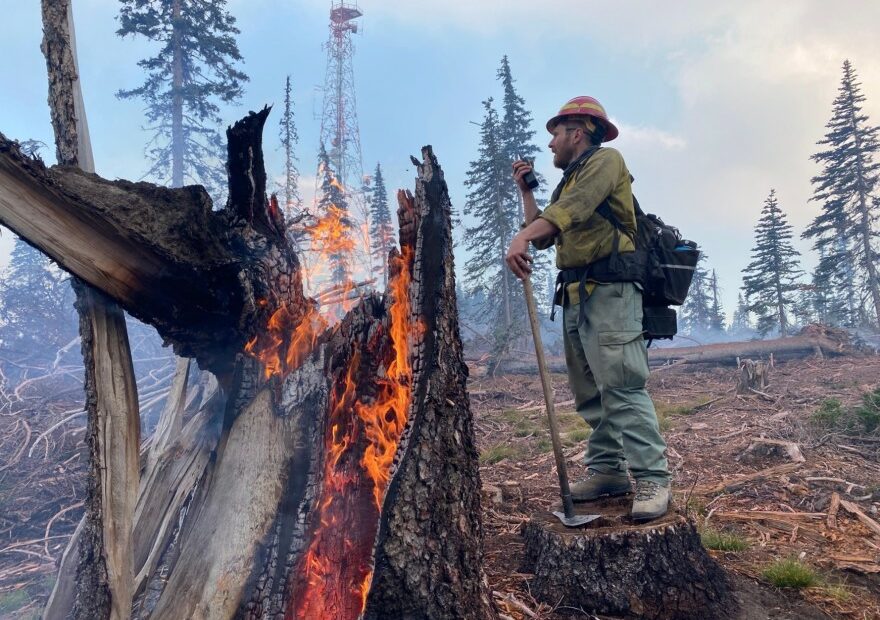 As fire and land managers hold their breath, they’re pleading with Northwesterners to play it safe this Labor Day weekend. The goal is to avoid any spark that could create any wildfires reminiscent of the wind-driven firestorm last year.

This season, more than 1,716 fires have burned more than 630,000 acres around Washington. That’s more acres burned than in all of last year, Franz said.

Even so, fire officials said they’re cautiously optimistic heading into the holiday weekend, which typically sees many people head outdoors seeking the last throes of summer.

“The big difference we have right now between last year is just the last two weeks,” Allen said, referring to better weather conditions.

Allen is leading the team fighting the Schneider Springs fire, currently the largest fire in the state, burning around 35 miles northwest of Yakima.

As Allen and Franz spoke, smoke from the fire reached what the Department of Ecology calls very unhealthy levels in Yakima and forced the news conference indoors.

Firefighters across the region have continuously worked almost non-stop to slow flames this year, Franz said. They’ve been on fires since July 1, she said. Last year, firefighters had rested before flames kicked up on the holiday weekend.

Covid-19
Part of that lack of resources has come down to available firefighters, she said.

This fire season also has been plagued by more Covid-19 cases than last year, Franz said. Last year three fire firefighters tested positive for the virus all before they reached the fire lines, she said.

“It’s a hard, challenging thing that we’ve got firefighters ready to fight. We need more firefighters. And we have to say, ‘No thank you. You have to go home,’” Franz said because of postive Covid-19 tests.

The department requires its wildland firefighters to be fully vaccinated against the coronavirus by Oct. 18. Vaccination sites will be open at DNR fire camps.

Most Western states are also in various stages of drought, she said. That meant more fires and fewer resources all around.

An Early Fire Season
In Oregon, fire officials also asked people to remain vigilant while outdoors this weekend. Fire danger in the south-central part of the state is extreme. Anything can start a fire, officials said.

Randall Baley, Oregon Department of Forestry protection unit forester in Klamath Falls said,“This summer has been one of the most challenging, if not the most, in modern history as far as fuel conditions, weather conditions, large fires, and air quality.”

Grass fires in region started in February and large fires picked up in March, which is an unprecedented early start to the fire season, officials said.

To prevent a repeat of last fire season, when heading outdoors, people should be aware of burn restrictions and land closures, such as in the area of the Bootleg fire.

“Even with the days getting shorter, fuels are still extremely dry, and it does not take much for a spark to grow into a large wildfire,” said Jeb Koons, interagency fire management officer.

Around 90% of fires are human-caused, Franz said.

“Many people feel like they’re helpless to these catastrophic fires – that there’s nothing they can do. They feel powerless. The reality is, they’re not,” Franz said. “All they have to do is make sure they don’t start the fire in the first place.”