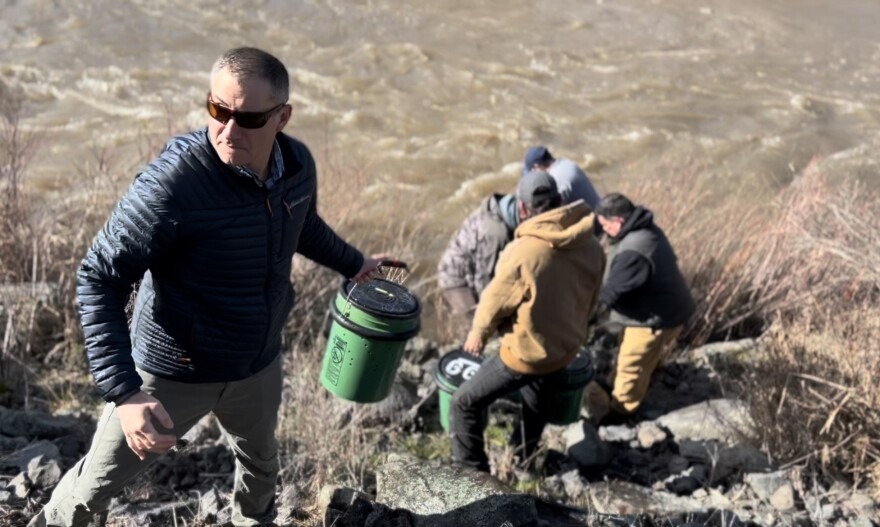 The tribes recently received $3 million from Washington’s supplemental budget – a big chunk of change that tribes said will help kick off the second phase of a decades-long study.

However, the tribes still will need to find significant funding sources, especially from federal agencies, to cover the entire study phase, which adds up to an estimated $176 million spread over 21 years, said Laura Robinson, a policy analyst with Upper Columbia United Tribes.

“To get this large investment of funds from the Washington state Legislature and governor is really helping increase this momentum,” Robinson said.

Most of the $3 million will come through the Washington Department of Fish and Wildlife starting July 1, 2022. The funds will cover work in Washington by the Colville, Spokane and Coeur d’Alene tribes.

In addition, the $3 million from the state of Washington will help provide equipment to three of the Upper Columbia United Tribes tribes, Robinson said.

The funds will help cover PIT tags, which allow researchers to track fish as fish swim downstream. Each tribe also will buy tanker trucks to trap and haul adult and juvenile salmon, which will help with cultural and educational releases, as well as with reintroduction studies, Robinson said.

Funds also will help tribes build rearing facilities, including net pins to rear and release juvenile fish. In addition, the Colville and Coeur d’Alene tribes plan to build facilities to rear fish, such as at Hangman Creek in Spokane. These funds will help the tribes design those hatcheries.

“The understanding that our old ones had – when they put their pride aside and settled on our respective reservations – was that we would always be who we always were. At the center of that was the gift that the returning fish had always provided for us,” James said.

Hydropower dams have blocked salmon from the Upper Columbia Basin for up to 110 years. Dams built on the Spokane River, and later Chief Joseph and Grand Coulee dams on the Columbia River, were all built without fish passages.

In 2015, the Upper Columbia Tribes began pushing in earnest for salmon reintroduction above the blocked area.

The tribes wrapped up initial feasibility studies in 2019. In the first phase of the study, the Upper Columbia tribes contributed $1.8 million, with federal agencies contributing $150,000, Robinson said.

So far, it’s been difficult to get additional funding from the federal government for these studies, said Chris Donley, the Washington Department of Fish and Wildlife’s Eastern Region fishery manager.

“The federal government has not been willing to fund a lot of the work that needs to take place to get to reintroduction,” Donley said.

Salmon must pass through dams owned by the federal government or public utility districts, Donley said.

“The state of Washington doesn’t really have a dog in the fight, but they’re investing in it,” Donley said.

For the second phase, the tribes have raised $5.5 million for the first year of the decades-long process, Robinson said.

The biggest funding needs will happen toward the end of Phase 2, when tribes will begin building interim fish passage facilities, Robinson said. That’s why tribes are trying to bank money now, she said.

Moreover, all of these studies will be based in sound science, said Jarred-Michael Erickson, chairman of the Natural Resource and Fisheries committees with the Confederated Tribes of the Colville Reservation.

“Our approach to Phase 2 studies will ensure that we obtain the scientific information necessary for future decisions about restoring salmon populations in the Upper Columbia,” Erickson said.

In addition, all of this work to eventually build fish passages will help tribes heal from nearly a century without salmon, said Carol Evans, Spokane Tribe of Indians chairwoman.

“My grandmother told me that the salmon once came all the way from the ocean to Tshimikain Creek, where our ancestors would go fishing for their sustenance. When I asked how, she said, ‘I don’t know but it is how it always was; the salmon took care of us, and we took care of the salmon,’” Evans said.