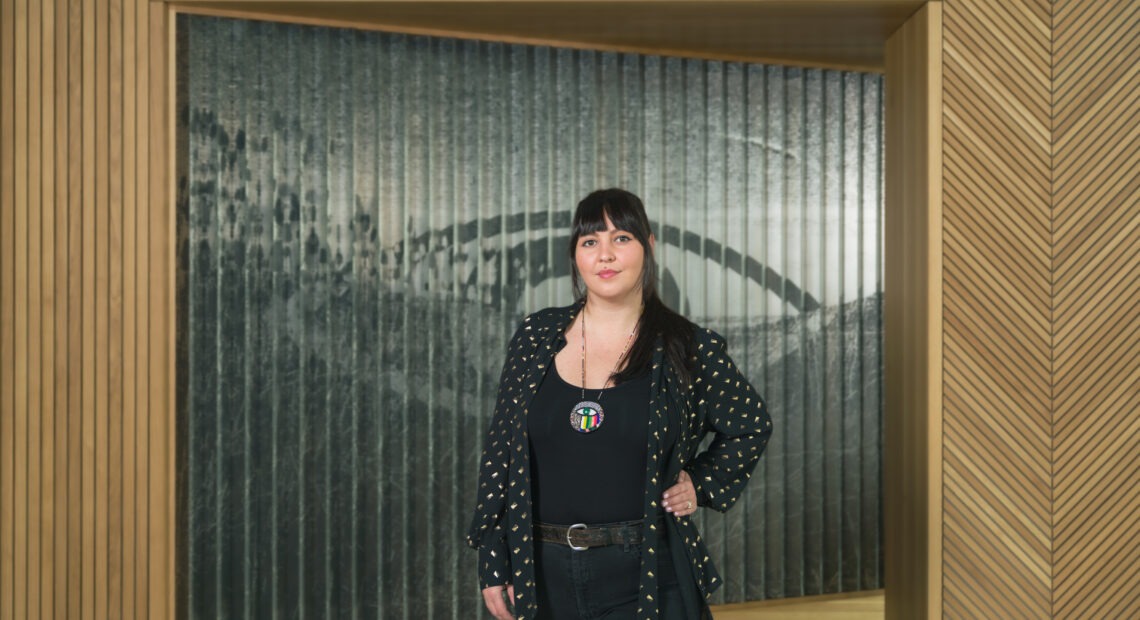 For artist RYAN! Feddersen, art is a form of communication;  a way to understand the world and a catalyst for meditation.

“A lot of my interest in art was about making things for community, as a way to interpret our world,” Feddersen says.

Last summer, she completed her second public installation in Tacoma called “Mini-Tahoma.” It was commissioned by the City of Tacoma and Pierce Transit — to be placed in the now inactive Waterwall fountain downtown.

Feddersen says she wanted to bring the water back to this space. Where water once collected in the cement basins, there is now a collection of ocean blue glass pieces. At night, LED lights transform lines painted above the basins, giving the illusion of water flowing back down the wall. 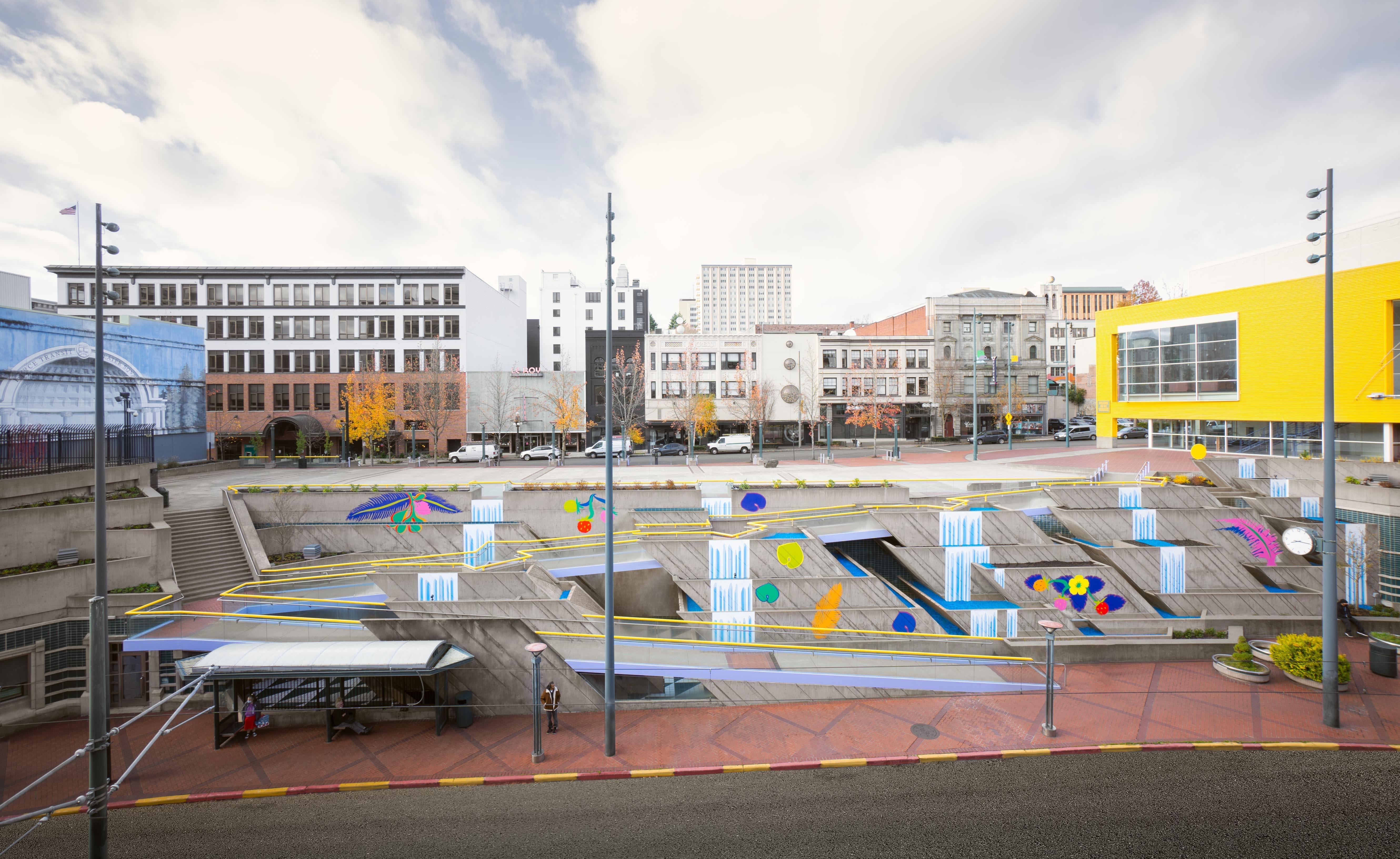 This connection to history and place is a common theme in Feddersen’s work.

She looks for ways for people to engage with the art, and bring them into the experience.

“I think of art as being very meditative, and a way of understanding the world,” Feddersen says. “And I’m kind of looking for openings to invite the audience into developing that understanding and meaning.”

Getting commissioned to create such an installation can be a challenge.

Rebecca Solverson is the City of Tacoma’s public arts specialist. Solverson says emerging artists in the public art space often have established studio practices and just haven’t had a chance to break into the public art world. This was the case for Feddersen, who worked as a studio assistant for a public artist, and worked for 4Culture, the cultural funding agency for King County, before breaking into public art.

Feddersen moved to Tacoma in 2019 while working on her first public installation —  NEXUS.

“Tacoma was just lucky to get her first permanent piece,” Solverson says, which was one of five commissioned by the Washington State Historical Society for the Prairie Line Trail.

“There’s so many stories on that trail, there’s so many layered histories. And so we decided with that project, instead of doing a big public art project, to break it up into smaller pieces,” Solverson says. “It was really a good opportunity for emerging artists, artists who hadn’t done as much permanent work, and a chance to get different voices, you know, have different voices telling the story.”

Her display shows what trade may have looked like before European settlers came to the area. 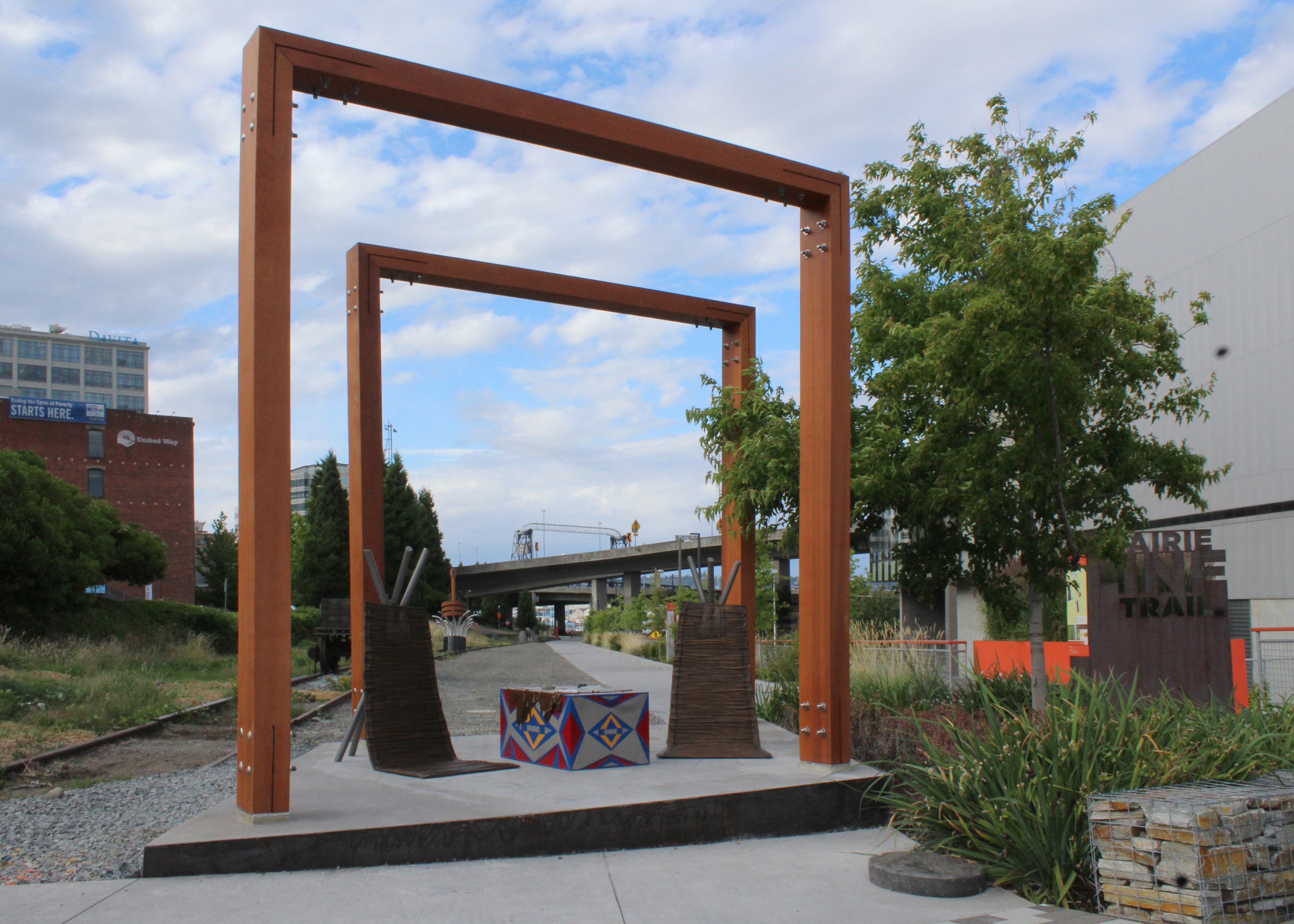 NEXUS completed in 2019 on the Prairie Line Trail. Photo by RYAN! Feddersen.

“The NEXUS piece is thinking about a kind of imaginary, trading interaction between Puyallup, Coast Salish and plateau, interior Salish tribes, which is where I’m from,” Feddersen says. Feddersen is a ​​member of the Confederated Tribes of the Colville Reservation.

In particular, Feddersen says she wanted to address “manifest destiny.”

“I was taught that the concepts of manifest destiny and that the settlers brought … trade, medicine, education, religion, all these things that were just completely untrue,” Feddersen says.

That official history that is taught can be harmful, Feddersen says. Through her creations, she processes different perspectives and narratives, and sometimes this means conflict, saying, “the pieces are a way to address the conflict between these histories.”

Local artist and arts organizer, Asia Tail says art is necessary for a just and balanced society. Tail is a member of the Cherokee Nation and co-found of yəhaw̓, an Indigenous creators’ collective.

She says, from an Indigenous perspective, there have been studies showing the positive influence art has on wellbeing and health.

“I think that public art gives us a chance to see ourselves as part of a larger whole rather than just as single individuals, and helps us reflect on our shared values and goals as a community,” Tail says.

Tail is excited to see more Black and Indigenous artists commissioned for public pieces, saying this is particularly powerful given the country’s history of stolen land and labor.

“Seeing other people like you, in the art world, doing important work is really inspiring and influential, and certainly makes new things feel possible,” Tail says.

Tail first worked with Feddersen at the Tacoma Art Museum.  “I just remember being really thankful for her mentorship and guidance throughout that as a more experienced Native person working in the arts.”

Tail also worked for the city when Feddersen was creating NEXUS.

“[She] has a really deep creativity that she pairs with insight, research, community engagement, a sense of play, I think, and a true belief in audience participation that has been really central to the work,” Tail says.

Tail described one instance involving audience participation:  Federsen installed a map of the United States at King Street Station in Seattle, showing Residential Schools across the country, from the time when Native American children were forcibly sent to these schools.

“When people went and touched the map, it would reveal the names of these places. And so it was a piece where, as you’re touching the map, you’re having to kind of physically face this really dark history in the sense of kind of discovery and uncovering and investigating with your body and being really aware of your body’s role in that,” Tail says.

Tail says Fedderson’s personal background and history is an essential part of her work, but it goes beyond her experience.

“I also think that her work speaks to everyone and has a really intersectional, cross community reach and that she designs it specifically to bridge conversations between people of all backgrounds,” Tail says.

Most recently, Feddersen completed a mural called “Schema” on the side of CitizenM hotel in Pioneer Square in Seattle, inspired by the early history of Seattle and turn of the century Native American beadwork.

Feddersen says it is her largest work in the area.