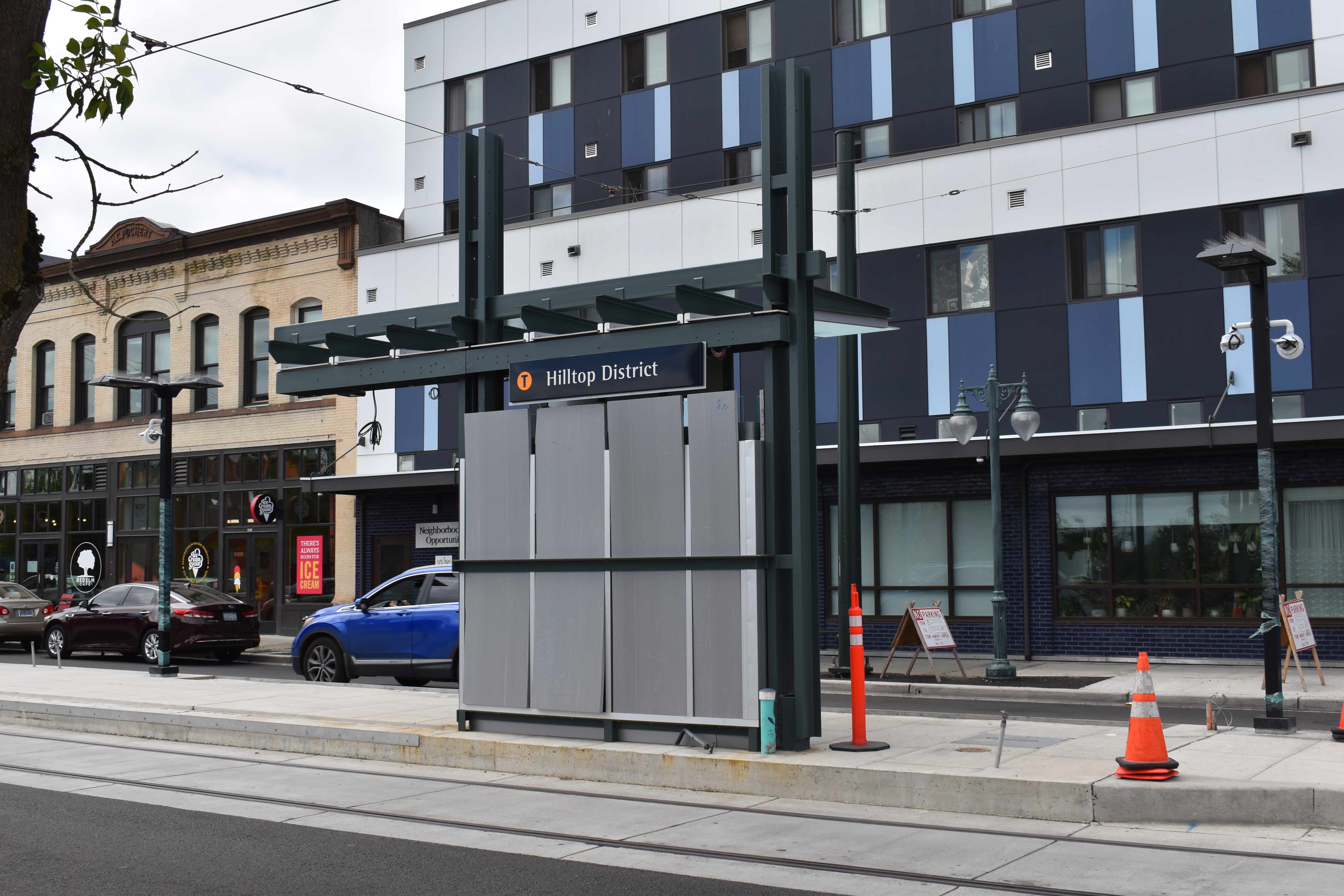 Pushing Back On The Gentrification Of The Hilltop

Tacoma’s Hilltop neighborhood is a place where generations have raised families, where small businesses have blossomed and where art intersects with your local corner mart. But it’s also a neighborhood where residents have faced systemic racism in the form of redlining, and now gentrification is displacing longtime homeowners and renters.

Shavona Wagoner’s family first moved into the Hilltop in 1963. Growing up, she was surrounded by her relatives.

“It’s a magical place to grow up. My childhood was ideal,” Wagoner said. “I couldn’t ask for anything better, playing in a yard with my cousins and just being regular.”

But Wagoner, a first-grade teacher, said she and her husband have no plans to buy a home in the neighborhood where her childhood memories were formed.

“I can’t buy a house on the Hilltop. Do you know how insane that is to me?” Wagoner said.

At one time, Wagoner’s mom, her grandparents, aunts and uncles, all lived in the neighborhood. But now Wagoner has no family on the Hilltop. Each left because their rents became too high, or it made more sense to sell — investors called Wagoner’s grandmother numerous times about buying her house before she passed away in 2015.

“Umi [her husband] and I looked at how much it would be for us to buy, it’s like seven [$700,000] to live in my grandparent’s house. None of my family lives on the Hilltop anymore,” Wagoner said.

Her family’s story isn’t unique. In the Hilltop, residents are at a high risk of being evicted or displaced, after the pandemic, according to the Urban Displacement Project, a research effort out of University of California, Berkeley and the University of Toronto that explores displacement and gentrification.

And this little community of Tacoma, from Sprague to Sixth Avenue, is gentrifying.

Wealthier and, often white people, are moving in while Black families, like Wagoner’s, are moving out.

Costs in this Tacoma neighborhood are rising at some of the fastest rates in the country, according to Jacques Colon, strategic manager with the City of Tacoma. This is pushing established Hilltop residents out of their homes.

Home prices are rising across the city — but the Hilltop, a small neighborhood that sits just beyond the city’s Wright Park, the hospital district and a bustling Sixth Avenue, has a unique history that is adding to community concern over who is getting priced out.

A history of discrimination

The Hilltop sits within a part of the city that was subjected to redlining—  a discriminatory practice where people of color and low income residents were segregated to only qualify for home loans in certain areas deemed “hazardous.”

The history of this practice can be seen in this “residential security map” of Tacoma from 1929. It was created by the federal government’s now terminated Home Owners’ Loan Corporation. Bankers used the map to determine where to provide home loans. Neighborhoods were given grades.

Parts of the Hilltop were given “definitely declining” or “hazardous” grades. The Home Owners’ Loan Corporation, which created the grading system, recommended lenders not provide home loans in these areas.

In an effort to right the legacy of that racist practice, the City of Tacoma began tracking equity based on a handful of metrics in different neighborhoods across the city.

“Redlining helped to push communities of color out of certain neighborhoods, it killed investment or moved investment into various areas of the city, which we are still seeing today in Tacoma,” says Bucoda Warren, chief policy analyst for Mayor Victoria Woodards.

Recognizing the harm this did, the city has started tracking things like life expectancy, transportation access and high school graduation rates in different neighborhoods, to see where services are lacking.

The equity index uses data from the 2015-19 census. That index shows that the area where the Hilltop neighborhood is has a low equity index. The area has a low livability rating — one way this is measure is through the “owner cost burden.” When a renter or owner has to pay more than 35% of their income on rent or mortgage, that is called a cost burden. In the Hilltop neighborhood, the owner cost burden is 43%; for renters it’s 49%.

Warren says that every policy that now goes to the city council has to include how the policy would impact various metrics of the equity index.

“It gives us data to work off of so that we can focus our limited resources into those areas that have been historically disinvested in and make sure we’re reversing these racist impacts of policies and practices of the past,” Warren said.

While Warren said the equity index doesn’t show displacement data, it does show factors that might lead to displacement, such as lower wages or lack of access to transportation.

The city can look to this index and see where it needs to prioritize providing more services, such as a light rail extension which is currently underway in the neighborhood.

Some residents feel expanded development in response to expanded services is forcing people out.

Jamika Scott, who also recently moved out of the Hilltop, says it’s not that people who already live in the community don’t want these improvements or amenities added to their neighborhood, it’s that they want to be able to stay in their homes.

“It’s like a neighborhood is only deemed worthy of that type of investment, when somebody who’s not from the neighborhood finally turns its eyes and says, ‘This is where we want the next hotspot to be,’” Scott said.

The Hilltop has a higher proportion of Black residents than the city as a whole. It’s a historically Black neighborhood, Shavona Wagoner said. And now, those are the families being displaced.

Kenya Adams is a community youth and family liaison who has worked with a handful of organizations in the Hilltop to solve how to keep longtime residents in the neighborhood.

“We’re working to address systemic harm done to the Black Hilltop residents, and have ultimately pushed them, a lot of Hilltop families, out of the neighborhood,” Adams said.

Adams is a part of the Hilltop’s Community Investment Council, which has turned the former Sav a Lot building in the neighborhood intoan open space for artists. The space, Tacoma’s Urban Performing Arts Center or TUPAC, will eventually be converted into affordable housing. Adams said they’re considering making the space a cooperative, where residents own shares of the building through their unit, and together, the cooperative owns the building and land to make decisions as a community.

Adams said by establishing this, they’re “Creating a safe space for the families and the generations who have lived on the many Hilltop blocks for so many years.”

Adding affordable housing to the equation

Some organizations are trying to mitigate displacement, and make sure new housing is affordable in the Hilltop.

The Tacoma Housing Authority is in the process of creating two buildings with affordable housing units. They’re calling the project “Housing Hilltop.”

All of the 231 units in the development will be set aside for people whose incomes are at most 60% of the area median income, explains Sandy Burgess, director of Administrative Services for the housing authority. This means a household of four people would have to make $61,080 or less to qualify.

“Part of the focus on Hilltop is the gentrification that we’ve seen occurring here,” Burgess with the housing authority said. “There has been displacement here. And we could see that and that’s why we started when we had opportunities to buy properties, we could see that assembling them in some size could really make a big impact.”

The housing authority will be legally required to keep the Housing Hilltop units affordable for somewhere between 40 and 50 years. This is much longer than the city’s multifamily tax exemption program, which only requires 12 years of affordability.

“And THA’s commitment to affordable housing is that we’re always going to keep it affordable,” Burgess said.

The housing authority shared the designs for the building on its website. Burgess said construction should begin in October, as they’ve submitted for permits and are finishing securing financing. The project will take about two years to complete; they anticipate leasing units in the end of 2024 to beginning of 2025.

Beyond providing housing, the Housing Hilltop complex will also include retail space.

The space in the north building is reserved for TUPAC, the urban performing arts center, to move into, so its current space can become affordable housing. TUPACwill continue to offer classes for low-income students and be a performance venue.

Burgess said they’ll be encouraging local and minority-owned businesses to lease the other spaces in the south building. The housing authority is working with the Hilltop Action Coalition on business development classes, and the hope is to have businesses that are ready to lease that space when the building is complete.

“We’re excited about that because that’s just really creating a pathway and having a place at the end of that pathway,” Burgess says.

Housing Hilltop is possible, in part, because of the Low Income Housing Tax Credit. Much of the funding comes from tax credit investors, who buy tax credits specifically set aside for low housing projects.

Shavona Wagoner, whose family lived on the Hilltop for generations, still feels the neighborhood has changed. She says it will continue to change if families who historically lived there can’t afford to buy homes.