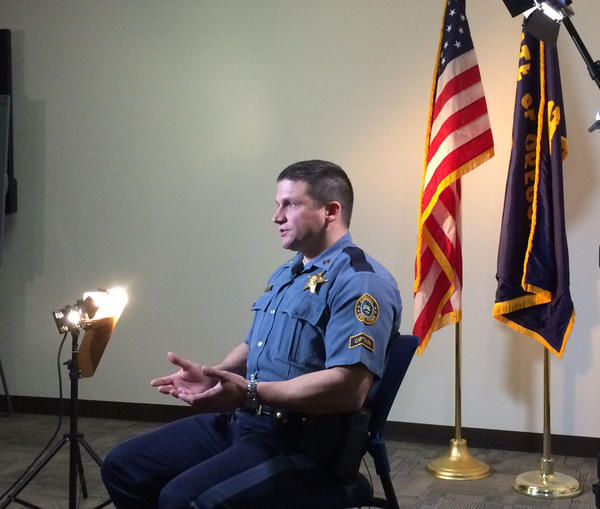 Prohibited Gun Buyers Get A Pass In Washington, But Not In Oregon

When a convicted felon, domestic abuser or fugitive tries to buy a gun in Oregon and is denied after a background check, a state trooper comes calling. Sometimes it leads to an arrest and prosecution.

But when this happens in Washington, it’s a different story.

On October 3, 2015, a man named Kyle Gregory Woodard tried to buy a .45 pistol from a pawn shop in Bend, Oregon. Woodard’s purchase was denied after he failed a background check because of an outstanding arrest warrant. That triggered a follow up investigation by an Oregon State Police trooper who confronted Woodard with the allegation that he had lied on the federal form to purchase the gun.

In his report, the trooper wrote Woodard “went pale and his face tightened.” Last February, Woodard pled guilty to one misdemeanor count of providing false information. He was sentenced to two days in jail and fined $100.

“We completely value people’s Second Amendment rights, but this law allows us to keep guns out of the hands of people who should not have them,” Oregon State Police Captain Bill Fugate said.

He said it’s a concern anytime someone who legally can’t buy a gun tries to.

“There could be a crime being planned and a person if they’re determined will find a firearm out there and our goal is to stop that from happening,” Fugate said.

Oregon’s crackdown on prohibited gun buyers started in 2014. It was reinforced with an executive order from Gov. Kate Brown in July of 2016 that directed Oregon State Police to continue its investigations of attempts to purchase by prohibited buyers and instructed the the State Police to notify local authorities in some cases. Now anytime a gun purchase is blocked, dispatchers alert nearby troopers.

Fugate said these are priority calls.

‘A question of resources’

But if someone crossed the Columbia River into Washington and tried to buy a gun and was rejected, chances are no one would come after them.

“What do we do? Not a darn thing,” King County Sheriff John Urquhart said in an interview with KING 5 late last year.

In Washington, local police agencies conduct the background checks for pistol purchases. But Urquhart said when people fail those checks, there’s no follow up.

“Primarily it’s a question of resources more than anything else,” Urquhart said.

“It can’t just be a lie-and-try system,” Ferguson said last November. “I then go to the next dealer and the one after that until somehow something falls through the cracks and I get that firearm that I’m not legally entitled to have.”

But soon there could be a consequence. A bipartisan bill in the Washington House would require gun dealers to alert the Washington State Patrol when a gun buyer fails the background check. The Patrol would then investigate.

Shannen Benefield is a domestic violence legal advocate who testified in support of the bill. She told the story of a client of hers who was put in a coma by her abuser.

“It wasn’t long after this incident the detectives working this case informed me that the defendant had attempted to buy a firearm 24 hours before he brutally beat my client,” Benefield said.

‘These cases are difficult’

Sheriff Urquhart and others in local law enforcement support having the State Patrol do the follow up investigation. But as Oregon has learned it’s one thing to investigate, it’s quite another to prosecute.

Hummel said he only files charges in about 20 percent of these cases. Since 2015, that’s 38 people.

“We have to prove criminal intent,” Hummel said. “Did the potential purchaser know that they had a criminal conviction when they answered no to the question. Or did they make an honest mistake?”

Honest mistakes, confusion and errors in the criminal database do happen. In fact, Oregon State Police field lots of calls from gun buyers who want to know why their purchase was denied or delayed.

While we were there, we got to listen in on one such call. The gun buyer’s purchase was delayed because of a previous drunk driving arrest.

Oregon gun rights advocates say it’s a waste of money to chase after these cases. And they say innocent people who’ve been detained and questioned by a trooper have been embarrassed.