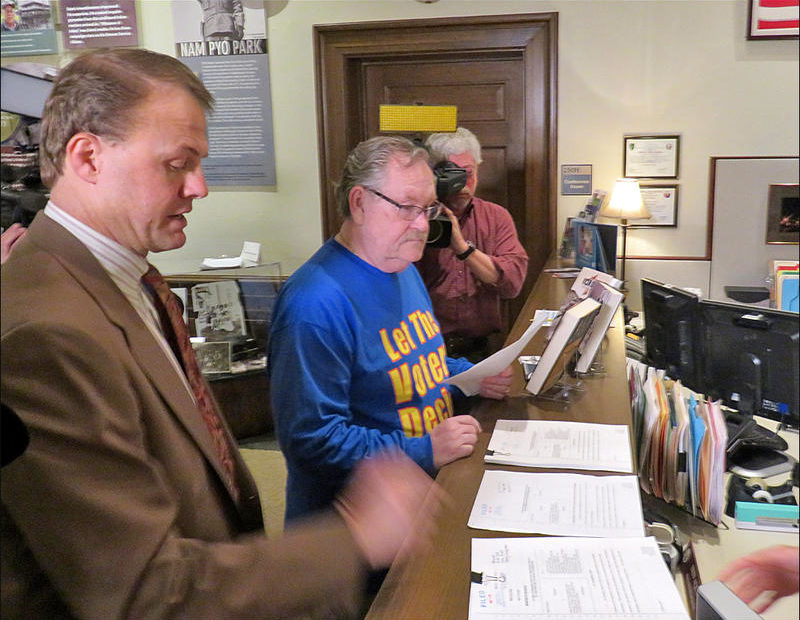 On the final day of the Washington legislative session last week, lawmakers passed a bill to make it easier to prosecute police for negligent shootings. It was a compromise agreed to by groups on all sides to keep a potentially divisive initiative off the November ballot.

“What we’re going to the judge to say is the issue is irrelevant,” Eyman said. “The process is what I want you to focus on. Is it the right thing they did in the process?”

In his lawsuit, Eyman asks the Thurston County Superior Court to order Secretary of State Kim Wyman to place Initiative 940 on the ballot alongside the legislature’s partial rewrite of the measure.

A state representative involved in negotiating the police charging compromise said the amending process that lawmakers chose is permitted by the state constitution.

“It clearly complies with what the constitution allows,” said state Rep. Roger Goodman in an interview Monday. “We reached a historic agreement between police and aggrieved communities. It’s a big win.”

The sponsors of the police deadly use of force initiative said they are reviewing the lawsuit and declined immediate comment.

In December, the De-Escalate Washington campaign turned in 359,000 signatures to qualify the measure for consideration.

I-940 was an Initiative to the Legislature. Under the state constitution, lawmakers can approve such a measure as is, in which case it promptly becomes law. They can reject or ignore the measure, which automatically sends it to the November ballot. Or they can propose an alternative to appear alongside the original on the November ballot.

In this instance, Eyman said the Legislature created a fourth option: It passed the original initiative and then immediately amended it.

Republicans in the state Senate questioned the constitutionality of the process during floor debate last Thursday. Eyman quoted from the debate in his legal filing.

De-Escalate Washington contended that it is nearly impossible under current state law to criminally charge police officers who negligently use deadly force. Relatives and allies of people who died in confrontations with police wrote I-940 to allow prosecutors to charge a police officer after a deadly shooting using a new “good faith” standard. The initiative also called for ongoing de-escalation and mental health training for officers.

The compromise the state legislature subsequently passed re-worked the charging standard again to remove a “malice” test and define good faith based on whether a “similarly situated reasonable officer” would have used deadly force.

Goodman, the chair of the House Public Safety Committee, said the legislative rewrite only addressed a few of the provisions of I-940 and therefore should not be presented to voters as an alternative.

“It’d be kind of confusing for the voters,” Goodman said.

“If any ruling were to impact what appears on the November General Election ballot, Secretary Wyman encourages the court to rule quickly so the case can be fully resolved before Washington’s 39 counties have to print voter pamphlets and ballots for the election,” Wyman’s spokesman Erich Ebel wrote in an emailed statement.

Eyman, who is acting as his own attorney although he is not a lawyer, said he expects a first hearing on the case before a judge next month. He argued in his complaint filed with the court that he has legal standing to bring the case simply by being a voter and taxpayer.

Eyman has some familiarity with the Thurston County Superior Court because he is a defendant there in a long-running campaign finance case which alleges improper personal use of contributions to a political committee. Last Thursday, a judge found Eyman in contempt of court for withholding records needed to proceed with the case. The judge set a daily fine of $250 per day until the contempt is purged.

Eyman on Monday deflected questions about that case, which the state Attorney General’s office is litigating against him.