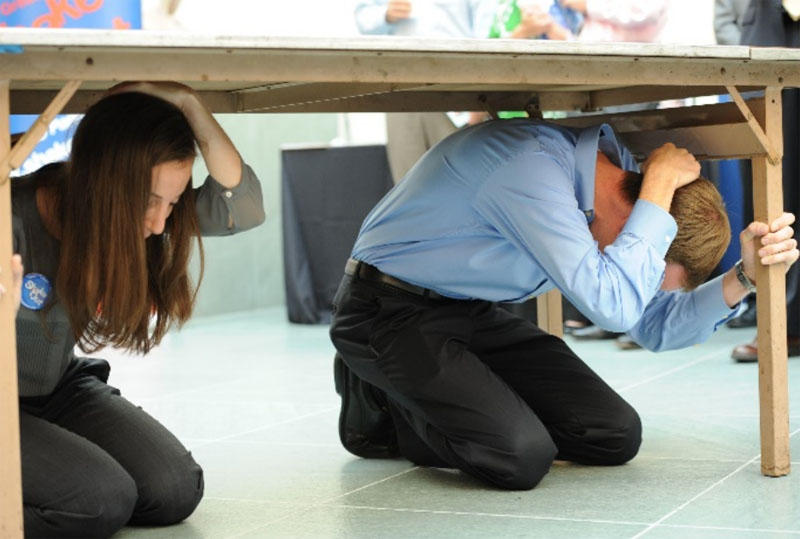 Cascadia Earthquake Prep: Parents Want Stockpiles At Schools To Prepare For ‘The Big One’

Planned student walkouts Wednesday bring attention to reducing the threat of school shootings. One group of Northwest parents is pushing schools to prepare better for another kind of disaster, a major earthquake.

If the Big One happens on a school and work day, Portland mother Laura Hall figures fallen bridges and buckled roads will prevent many parents from reuniting with their kids quickly. And if a Cascadia megaquake strikes afterhours, disaster victims may end up at the nearest school in hopes of finding help and shelter.

So a group Hall co-chairs called Parents4Preparedness is asking local schools for permission to stockpile emergency supplies to last for days in a shed or shipping container.

“We need some sort of container outside the school building,” Hall said. “We can’t expect people to go into the schools and bring stuff out if those buildings are not safe to be in or if they’re partially collapsed even.”

Hall said parents have been stymied in Portland. But she’s pleased to see that every school in coastal Lincoln County, Oregon hosts a community-maintained emergency supply cache.

During a Tuesday meeting, Hall asked the Oregon Seismic Safety Policy Advisory Commission to include mass care at schools in an upcoming package of policy recommendations.

The Oregon Legislature asked OSSPAC to make recommendations by this fall for how to better prepare to care for large numbers of injured earthquake victims and displaced people as well as steps to increase earthquake insurance coverage.

“If schools were required or incentivized to keep emergency supplies on school grounds, student and staff basic human needs could be met in the days that it takes for all children to be reunited with their families,” Hall testified. “We recommend that schools have basic supplies for at least one-third of their students for 72 hours.”

Hall acknowledged schools may not have the money or “bandwidth” to shop for shipping containers and deal with disaster supply acquisition and maintenance.

“Community members are often eager to fill the containers once they see them on school grounds,” Hall reported about Lincoln County’s experience.

The Parents4Preparedness recommendation is more robust than the beginning-of-the-school year request some Pacific Northwest parents get to supply a few non-perishable “comfort foods” and supplies for their children’s homeroom teacher to store in case of an extended lockdown or other emergency.