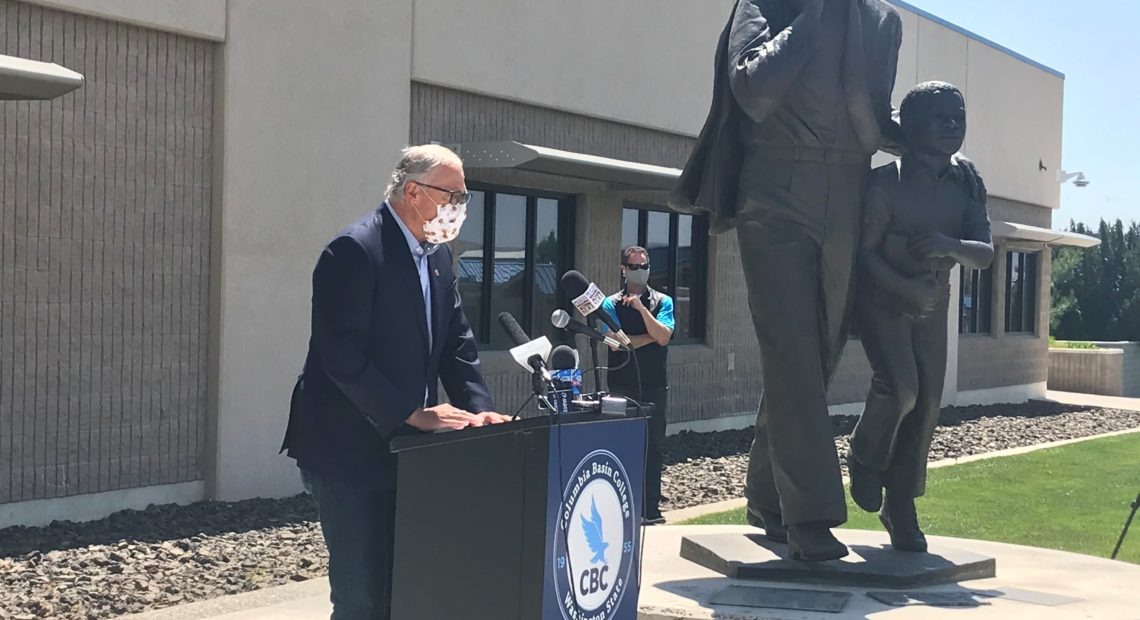 The Tri-Cities has seen what Gov. Jay Inslee called an “astronomical increase” in COVID cases.

In a visit Tuesday, he said local officials have asked him to implement stricter mask requirements. They also asked to open more small businesses.

About 10 protesters – one wearing a T-shirt that read “Inslee is Non-essential” and none appearing to wear masks – shouted the governor away from his podium at Columbia Basin College in Pasco.

“You’re a little muffled,” one protester yelled several times, in reference to the governor’s mask, which was decorated with small bumble bees.

After speaking over hecklers for about five minutes, he’d had enough.

Amid boos from those carrying signs like “Wake Up and Smell the Tyranny,” the news conference moved indoors. Protesters could still be heard shouting outside.

“Say anything you want – this is a free country,” Inslee later said once inside. “Disparage any governor or senator or president that you desire. But do it with a mask on.”

ALSO SEE: Wearing Masks Helps. Here’s Why, And Why You Should

Over the past two weeks, Inslee said infection rates have increased six-fold in Franklin County and nearly five-fold in Benton County. The main thing that could help, he said: masks.

“Yes, there’s controversy, as there is in any great, noble endeavor, but the vast majority of people in (the Tri-Cities region) want to beat this pandemic,” Inslee said.

Inslee said local elected officials and the Benton-Franklin Health District have asked him to require businesses only serve people who are wearing masks. He has already implemented those restrictions in neighboring Yakima County.

Officials also asked to move the Tri-Cities into a scaled-up Phase 1.5, where more small businesses could open, as counties like Chelan and Douglas have been allowed. Inslee said he’s considering both measures, but infection rates are climbing.

After Inslee required masks on June 26, he said there has been more compliance in the Tri-Cities. Benton-Franklin health officials have noted slightly more than 50% of people wearing masks recently, or 160,000 people, Inslee said.

But more opening means more people will come into close contact and could potentially pass on the coronavirus. State officials are weighing the health risks and the need for hope, as they decide whether to allow the Tri-Cities to advance to a Phase 1.5.

Inslee said there’s been good “adherence to law” so far, at which point Kennewick Police Chief Ken Hohenberg, who was standing off to the side of the governor, nodded in agreement. 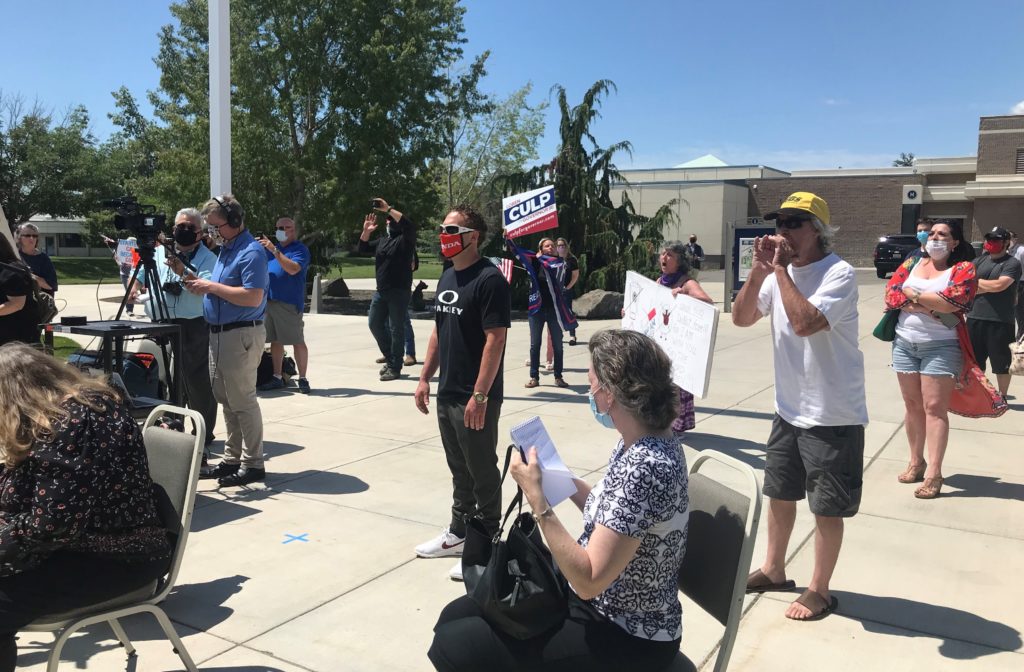 Protesters at an outside news media briefing heckled Gov. Jay Inslee at Columbia Basin College June 30, 2020. “Say anything you want – this is a free country,” Inslee later said once it was moved inside. “Disparage any governor or senator or president that you desire. But do it with a mask on.” CREDIT: Courtney Flatt/NWPB

Inslee noted that the Tri-Cities — home to Hanford and Pacific Northwest National Laboratory —  are “communities of scientifically literate people” and “dynamic community response.”

“It should be troubling that we’re having this debate,” he said. “There is no debate in the scientific community about the fact that masks work, and it’s surprising to me that people are still yelling about that anywhere, including in the Tri-Cities.”

He said people from both sides of the aisle have supported masks, such as Republican Dan Newhouse (whose congressional seat Inslee previously held when he lived in Yakima County).

In addition to the “very significant health threat,” Inslee said there’s concern about ICU beds in the Tri-Cities. Some patients from Yakima County have been sent to hospitals in the area. Inslee said as of Monday, only one ICU bed was available right now in the Tri-Cities, but that hospitals could build in more capacity. He said the bigger concern was about staffing levels as the pandemic grows.

Statewide, he said if other counties see serious outbreaks, there is potential to move them back to more restrictive phases of the four-phase reopening plan.

“One of the reasons we’re getting an uptick in this pandemic across the state of Washington, is that people are just thinking, somehow we’re over this. This is something about yesterday’s business,” he said. 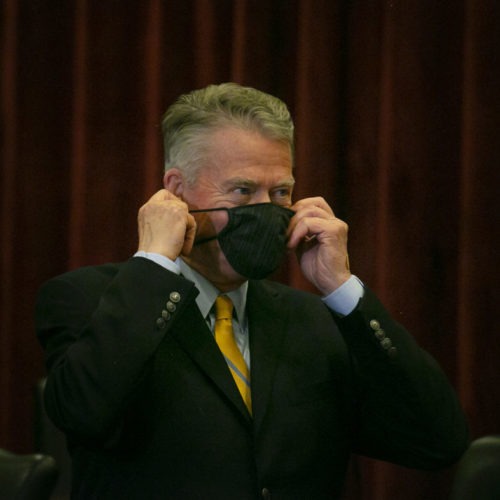 Idaho Gov. Brad Little on Friday issued an executive order repealing a mask mandate prohibition put in place while he was out of the state by the lieutenant governor, describing her actions as a tyrannical abuse of power and an “irresponsible, self-serving political stunt.” Continue Reading Idaho Governor Overturns Mask Ban From His Own Lt. Governor, Calls It ‘Self-Serving Political Stunt’