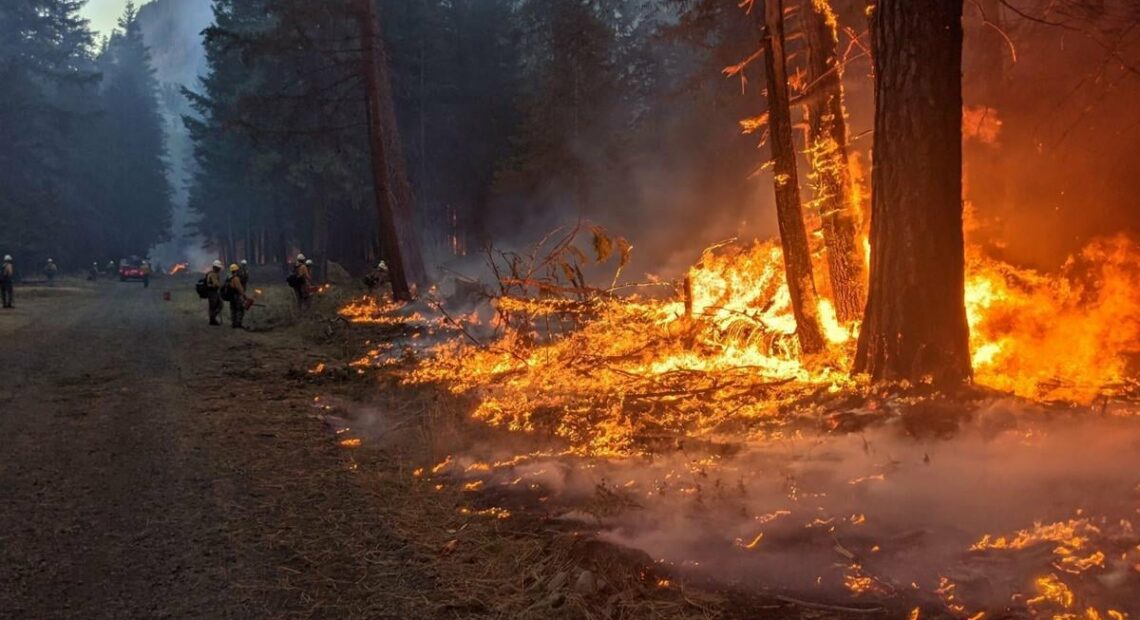 Scientists are studying old wildfires to find what forest treatments slowed the flames – and what treatments didn’t work so well. Researchers are looking closely at the Schneider Springs fire, the largest wildfire in Washington in 2021.

Scientists also discovered one type of treatment is key to forest resiliency: prescribed burns. They said forest managers can harness wildfire to do the work of prescribed burns for them.

The Schneider Springs fire provided examples of the benefits of prescribed burns and other fire treatments.

After a hot, dry summer in 2021, the forest just outside Naches, Washington, was parched, ready to burn, and waiting for a spark. That’s when a dry lightning storm swept through the area. Lightning bolts struck with alarming speed and little water to squelch any potential flames.

Strikes deep in the William O. Douglas Wilderness lit a fire in dangerous, steep terrain, too precarious for a firefighting force already stretched thin by other fires across the country. 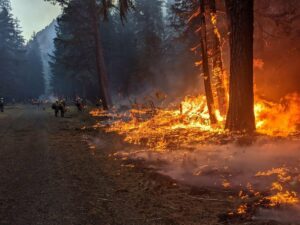 “Sometimes you get to give up acres to make people come home at night,” said Jason Emhoff, a fire management officer with the U.S. Forest Service.

So, to keep crews safe, the Schneider Springs fire grew.

As it burned, the fire reached the crown of the trees, known as a crown fire, said Ryan Rodruck, a spokesperson with the Washington Department of Natural Resources.

“These fires in the crown, 20-foot-flame lengths, were moving at the speed of Mach Jesus across the landscape,” Rodruck said

Those fast flames quickly hit a roadblock: a 3,000-acre forest stand, part of the Angel Underburn Project area, that land managers had previously thinned and burned, returning this patch of trees to healthier conditions more resistant to flames.

A year after the Schneider Springs fire burned 107,322 acres, the largest fire in Washington in 2021, land managers have studied various forest treatments in the burn path. Scientists have discovered one thing is key to forest resiliency: prescribed burns.

Any fuel treatments, such as commercial or non-commercial forest thinning, will help fires burn less severely, said Derek Churchill, a forest health scientist with the Washington Department of Natural Resources. Recent fires have shown, though, prescribed burns keep flame lengths low, resulting in a less of a “The Lord of the Rings” Mordor-like forests post-fire, Churchill said.

Thinning reduces the number of trees and makes forests resistant to drought and the effects of climate change, he said.

“Then, if we can do the prescribed fire and treat those fuels, that’s the best case scenario,” Churchill said.

Prescribed fires generally happen a few years after land managers thin forests. These controlled burns get rid of the really fine fuels on the forest floor.

“If you don’t do prescribed fire or other ways of treating the surface fuels, you’re rolling the dice,” Churchill said.

In other mega-fires, land managers had thinned forests but left piles of branches to dry out and burn later. During the Cedar Creek Fire in 2021 near Winthrop, neighbors said these slash piles provided extra fuel for the fire to burn hotter and quicker.

In fact, at the Schneider Springs Fire near Naches, some areas hadn’t seen the benefits of a prescribed fire yet, although they had been thinned. Those areas didn’t fare as well as the patch of forest where managers had done a prescribed burn.

In that area, earlier commercial and non-commercial thinning, later followed by prescribed burns, helped change the outcome of the fire, Churchill said.

In roughly two-thirds of the burn scar, the fire burned much less severely, leaving trees alive and soils uncharred. These are the types of fires the ecosystem needs, Churchill said.

In less severe fires, the wildfire consumes and maintains healthy forests, he said.

Those types of fires are more akin to historical fires that didn’t kill entire swaths of forest, like often happens after 100 years of fire suppression that created unhealthy forest conditions.

Now, scientists with the Department of Natural Resources are looking at fires, such as Schneider Springs, to learn more about when fuel treatments worked and when they didn’t.

“It’s not really a question of if these landscapes are going to burn, it’s really when and how. And so if we anticipate that we can try to harness the work of wildfire for good outcomes,” Meigs said.

In addition, he said, if forest and fire managers can anticipate what would be needed as a fire burns, forests can be strategically treated, which he called a paradigm shift.

“Then one of the key things of those treatments where they are implemented with forest thinning is to combine that with prescribed burning to reduce the surface fuels, because that’s really the thing that’s going to slow down or change fire behavior,” Meigs said.

In addition, he said, fire-resistant parts of the forest allow fire managers to use resources elsewhere, such as near homes or other parts of the fire.

However, there’s a lot of land to treat across the state. The Department of Natural Resources is working on a strategic plan to figure out where it will get the most benefit from these types of treatments

“We are in a race against time to really treat as much as we can as quickly as we can,” Churchill said.

Another idea is to use wildfires to benefit forest health, Churchill said. If forest thinning helps make wildfires less severe, those beneficial wildfires could do the work of prescribed burns for land managers, clearing out the duff on the bottom of the forest floor as fires would have more than a century ago.

“You need to treat enough of the landscape so that when you have a fire, most of the fire ends up doing good work,” Churchill said.