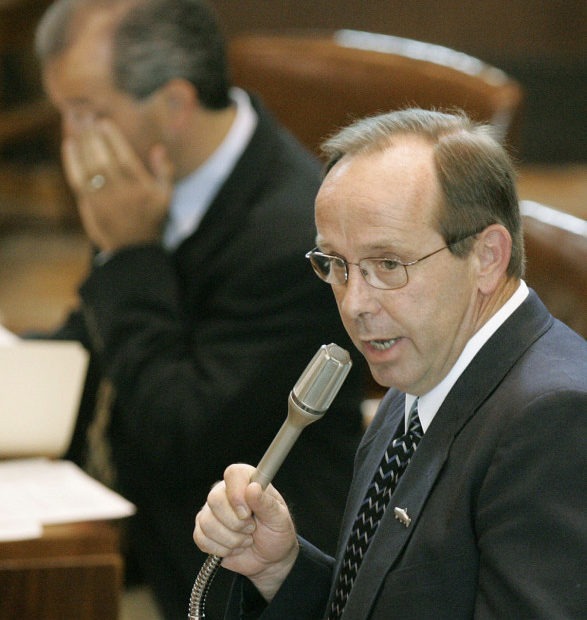 Oregon state Senator Jeff Kruse has announced he will resign.

The move comes after mounting pressure over allegations that he sexually harassed several women at the Capitol. Those women included two fellow lawmakers.

In a statement, Kruse, R-Roseburg, says he denies the allegations. He says he chose to resign so “my colleagues may focus on serving Oregonians without distraction.”

An investigative report into Kruse’s actions was published this week. It said Kruse continued to touch and harass female colleagues, even after he had been warned to stop.

Kruse has been in the legislature for more than two decades.

An investigation into behavior by Oregon Sen. Jeff Kruse, R-Roseburg, released Tuesday states Kruse had a pattern of “engaging in unwelcome physical contact toward females in the workplace.”

An independent investigator was hired to look into the allegations of unwanted touching by the state senator. The investigation found Kruse’s hugging and unwanted touching of women escalated after he was warned to stop. And although the investigation was sparked by a formal complaint from two of his fellow state senators, some of his advances were directed at other women, including two law students who were working in his office.

The investigation was done by Oregon lawyer Dian “Dee” Rubanoff. She wrote the women accusing Kruse were credible and lacked any motivation to make false allegations. Many of the women were initially hesitant to come forward due to the power imbalance between them and Kruse. One woman said Kruse’s behavior was well known in the statehouse and she felt pressure to show deference to the senator and not embarrass him.

On Tuesday, Gov. Kate Brown released a statement calling on Kruse to resign. “Senator Kruse’s behavior is not acceptable in the Capitol or any workplace, and he should step down,” Brown said.

House Speaker Tina Kotek echoed the sentiment, adding if Kruse doesn’t resign, the Senate should vote to expel him. “The people of Oregon and the women who work in the Capitol deserve better,” Kotek said.

Women shared stories with the investigator of lingering side hugs, head-to-head contact and described feeling trapped by Kruse.

One law student working for Kruse said the state senator told her she was “sexy” and called her “little girl.”

“He would come up behind her at her desk and put his hands on her shoulders and rest his chin on the top of her head. This might last for 20 seconds, and she would sit very still and wait for it to be over,’” the report said.

The student described “a lot of hugging.”

“Other staffers joked about Sen. Kruse’s reputation and that he was on a ‘smoke break’ during the harassment training,” the report reads. “This made her feel like his behavior was known and accepted at the Capitol.”

The law student relied on normal social cues to alert Kruse that she was uncomfortable. She tried to minimize the amount of time she spent in Kruse’s office.

The other law student shared similar stories. Kruse would give her neck massages and put his hands on her hips or lower back when they were talking. The law student said it was difficult to say anything because of the power dynamic.

“She said she was just starting her career and ‘he has all the power,’” Rubanoff wrote.

Instead, the student switched offices and started working for another senator.

Others came forward with accusations as well. A female lobbyist accused Kruse of “cupping” her butt during a photo opportunity with the governor.

Another lawmaker in the House told the investigator Kruse had been “very physical” with her, although she added it didn’t seem sexual. She described scenarios where there was “zero space between them” and “lingering closeness.”

Sen. Ginny Burdick, D-Portland, is mentioned in the investigation as intervening after Kruse was behind a member of her staff with his hands on the staffer’s arms. Burdick told him, according to the report, “get your hands off my staff.”

And one nonpartisan member described Kruse kissing her on the cheek, near her mouth. It felt more friendly than romantic, the staffer said, but she tried to avoid being hugged by Kruse after that.

The investigator said didn’t think Kruse was “a bad person” nor did he intend to “hurt or offend anyone.” He was cooperative throughout the investigation, she wrote.

Kruse did not deny the majority of allegations, according to the report, but instead stated he had no recollection of the incidents.

The investigator said Kruse only flatly denied one allegation, which was that a staff member had seen him viewing pictures of naked women on his phone in 2016 on the Senate floor.

Later, Kruse told the investigator that previously he considered touching acceptable if he didn’t mean anything sexual by the advances. He said he recently grasped the concept of “unwelcome conduct” after seeing a therapist for one hour in Roseburg.

Kruse was stripped of his committee assignments because of the allegations of inappropriate touching.

A Senate special committee on conduct will use the investigator’s report as a starting point to consider the sexual misconduct case and possibly recommend sanctions, including possible expulsion, against Kruse. The committee will hold a hearing on Feb. 22.

The Senate will vote on the committee’s recommendations.

The special conduct committee is chaired by Beaverton Democrat Mark Hass. Republican Sens. Bill Hansell, of Athena, and Kim Thatcher, of Keizer, along with Sen. James Manning, a Democrat from Eugene, sit on the committee.

It would take 23 votes from senators to expel Kruse from the Senate. The Senate has 17 Democrats and 13 Republicans.

After spending time with Kruse, the investigator wrote she worries if there aren’t serious consequences, his behavior could continue.

She concluded her report by saying women may feel it’s pointless to come forward if there aren’t meaningful consequences for Kruse.