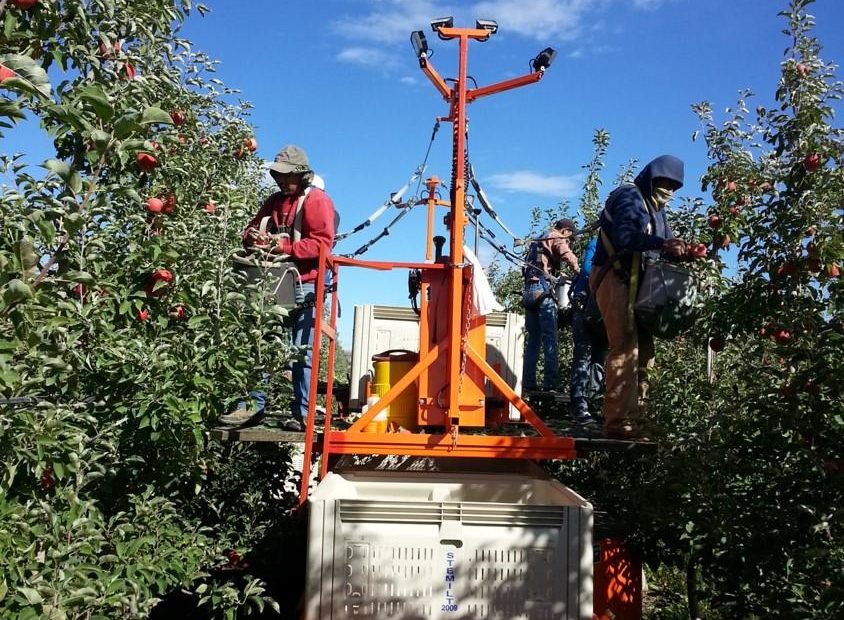 Robotic Future For Apples May Be Coming, But Not Quite Yet

Right now, your apples are harvested by humans. But Washington may soon face a shortage of apple pickers: as soon as 2021, according to Washington State University economist Karina Gallardo. The labor pool is shrinking with tougher immigration enforcement and a growing Mexican economy.

The solution could be automation – as in robots. But don’t expect to see them soon. Karen Lewis, who studies tree fruit with Washington State University, lays out the challenges an apple-picking robot would face:

“That robot needs to find that apple, adhere to it, detach it, and place it into some kind of conveyor system. That’s a big task,” Lewis says. “Often the challenges are the vision system – being able to see every apple.”

Many things that humans do easily, like pick things up and move across the ground, are difficult to replicate with machines. A human arm is a complex system of bones, muscles, and joints. Even getting a robot to move is difficult. Orchards aren’t as robot-friendly as a factory or warehouse.

Lewis says there are only a few labs in the world developing apple-picking robots. Other possible solutions? Tools to make human pickers more efficient. Companies like Automated Ag in Moses Lake are working on those.

Moving to a more automated apple industry could mean changes to the industry’s basic economic model. Right now, Lewis says, tree fruit growers own all their land and their equipment, and hire their own employees. But automated orchards could look more like the corn or potato industries: apple orchards would contract out to companies with specialized equipment.

And, Lewis says, that might stop small growers from losing out in a changing market.

What does this all mean for the people who work in the industry, picking, storing, and packing tree fruit? Karina Gallardo is optimistic.

“If there is a surplus of labor – and I believe that will not be the case – at some point the economy will find an equilibrium,” Gallardo says. “People will find other job opportunities.”

Lewis thinks that apple picking might become a position requiring more skills and education, but sees training and education opportunities for current workers.

“There are key people in those positions that we need to get into courses and programs that will enhance their skills so they can stay in this industry,” Lewis says. “We want to grow our own, we want to hire within, we want to educate within, but tree fruit is an industry that will always be attracting the group of people who studied math and science.”

Significant automation may be a long way out for the industry, but tree fruit growers are already talking about it – and preparing for it. Apple picking robots were tested in Prosser earlier this month.