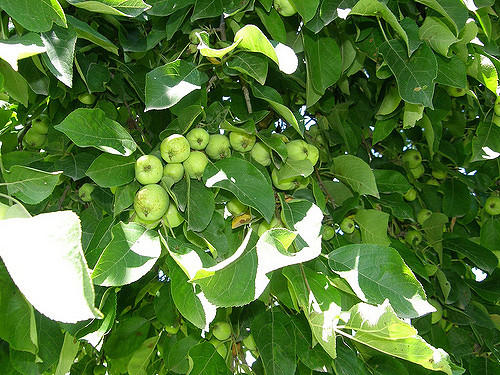 The apple as we know it – crisp, sweet, and juicy – is a modern invention.

It’s a strange way to think of tree fruit, which we often imagine as natural bounty, ripe and ready to be picked from the tree. Our ancestors had no such apples to pick. The modern orchard apple, Malus pumila, is the result of millennia of careful breeding.

Mankind bred apples to be delicious. But not disease resistant.

“We don’t have much in the way of disease pressure here in Washington,” Washington State University apple breeder Kate Evans says. “But we do have some fire blight, which is a bacterial disease which can be devastating in an orchard.”

Fire blight causes flowers and fruit to shrivel and blacken, ruining harvests. Modern apples don’t have the genes for fire blight resistance. But other Malus species can carry many such genes. That includes Malus sieversii, the ancestor of today’s apples. For the past 20 years, American researchers have studied this Kazakhstani apple.

That’s where Kate Evans’ research comes in. Evans developed the upcoming Cosmic Crisp apple, and she’s also working on breeding a variety of apples with resistance to fire blight. But it’s not as simple as crossbreeding, say, a Honeycrisp with a wild apple. Even though Malus sieversii has useful genes, it’s not edible. In fact, it’s a crabapple, and it tastes terrible.

Crossing a delicious commercial apple with M. sieversii can make it resistant to fire blight, but it also results in an apple that nobody would want to buy. But there’s some good news: scientists have mapped the apple’s genome.

“Now that we’ve sequenced genomes, we can tell where genes are, and we can identify DNA markers,” Jim McFerson, director of the WSU Tree Fruit Extension in Wenatchee says. “So now instead of growing a plant out to see what it looks like, we can just look at the DNA before we even plant the tree, because we know the markers.”

But it still takes a very long time to develop a new apple variety; about 20 years of breeding. And that’s with domestic apples. It can take longer with wild apples, since there are so many negative traits to filter out.

“Right now we are at the point of making some decisions about which sieversii accession we want to use as parents,” Evans says. In other words, we aren’t going to see blight-resistant apples in orchards anytime soon.

That leaves one big question: if researchers can pinpoint the gene for resistance, why not use genetic modification to engineer apples with the genes you want? Evans points to two major barriers.

The first is consumer acceptance. People just don’t want genetically modified apples. The other is a practical issue. You can give an apple resistance to a disease, but pathogens adapt quickly.

“A pathogen will go through many generations through the lifetime of a traditional apple orchard,” Evans says. “So in order to make a good strong resistance, a long-term resistance, you need to identify multiple genes and introduce those into the apples.”

As technology changes, genetic modification or gene editing could become viable. For now, WSU and other researchers will keep breeding apples the not-quite-old-fashioned way.